IT WAS THE CATCHY carnival style music that first drew me to the window, to see the colorful tropical-themed ice cream truck parked across the street from my house on a cool Monday evening. Except this wasn’t exactly an ice cream truck, as I would soon learn. 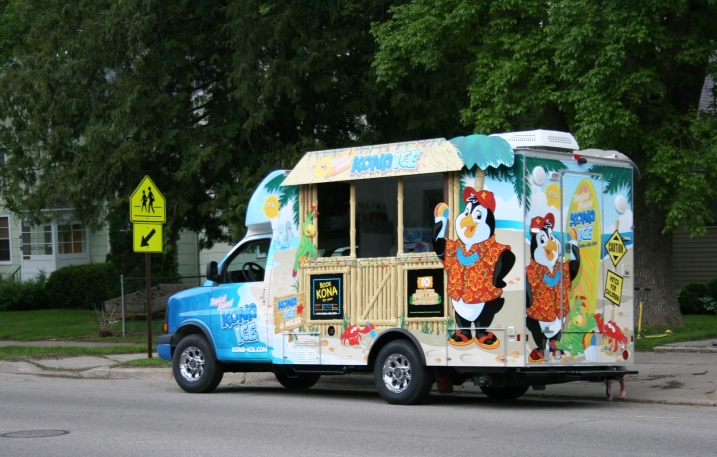 The Kona Ice Southern Lakes truck parked across the street from my house on Monday evening.

I grabbed my camera and snapped three quick photos before the vehicle pulled away from the curb, leaving me uninformed. Until I googled “Kona Ice.”

As it turns out, I know the owner of Kona Ice Southern Lakes. Faribault resident Todd Carver was just wrapping up his first day of vending flavored shaved ice when he stopped in my neighborhood.

Wednesday afternoon, his third day in business, Todd was back per my request and his offer to stop by so we could chat and I could sample Kona Ice served from his franchised truck. 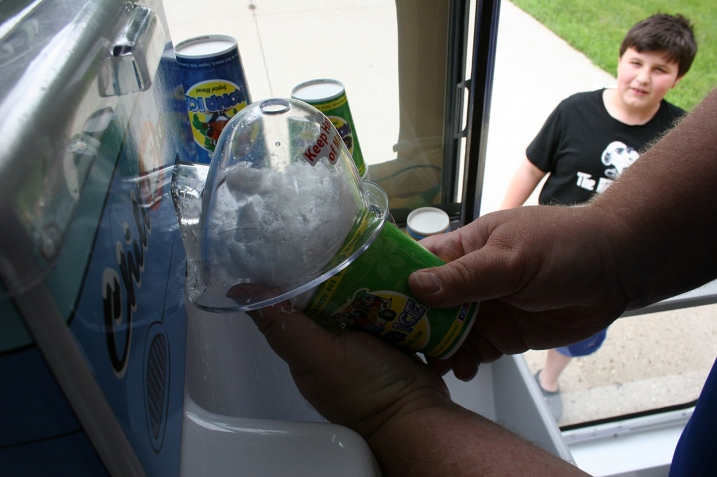 Todd guides tempered, shaved ice into a cup while a neighbor boy waits. 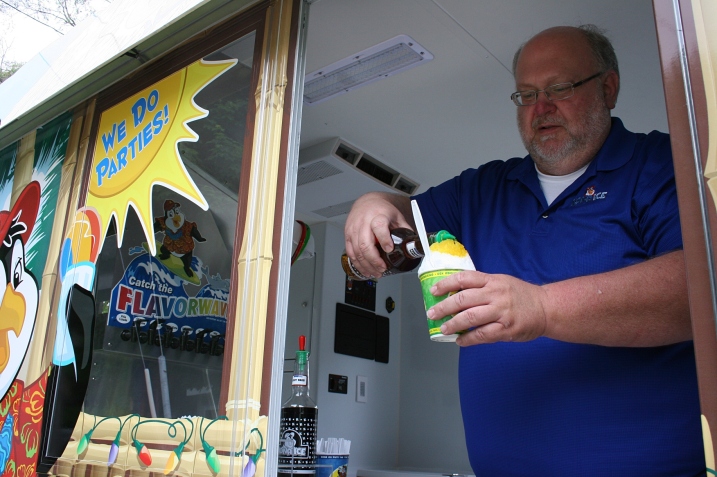 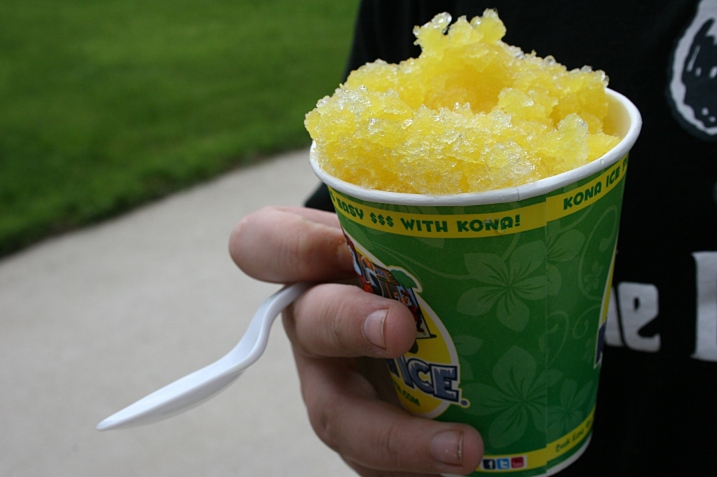 Todd had barely parked when a neighbor boy showed up for a French vanilla Kona Ice. After that, while I photographed and we sat in folding chairs on my driveway and talked shop, a half dozen more neighborhood kids arrived to try flavors like pina colada, bubblegum and blue raspberry. 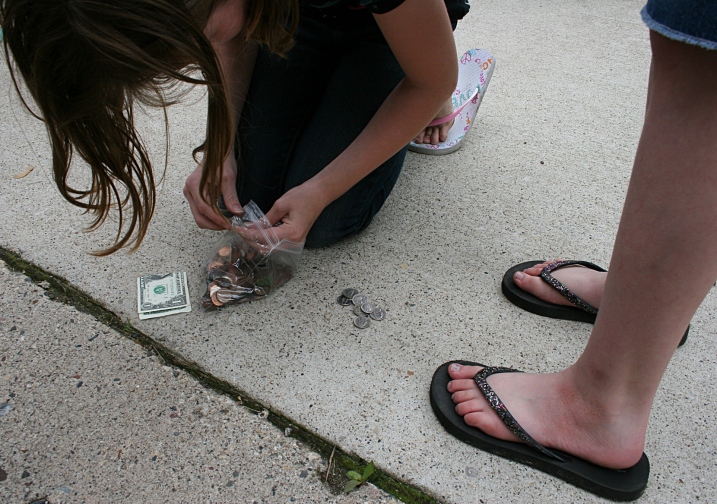 A dollar bill and coins for a treat.

One brought a bag of coins, parceling the needed change onto the driveway before ordering.

Me? I sampled a complimentary Tiger’s Blood, a delicious melding of strawberry and coconut, and the company’s bestselling flavor combination. Todd’s right. Kona Ice is nothing, nothing at all, like the chipped ice snow cones of my childhood carnival memories. Rather, the shaved ice, as he says, “absorbs the flavor like a sponge.” Every ice shaving is infused with flavor. 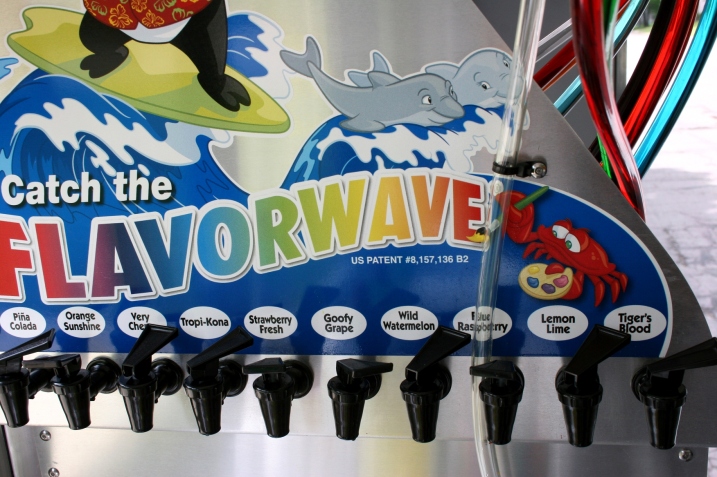 The patented Flavorware system inside the truck is duplicated on the exterior for self-service.

Not only that, Kona Ice features a patented system, Flavorwave, in which customers can dispense the fruit flavor(s) of choice onto the shaved ice. Thirty other special flavors are available upon request and prepared by Todd. 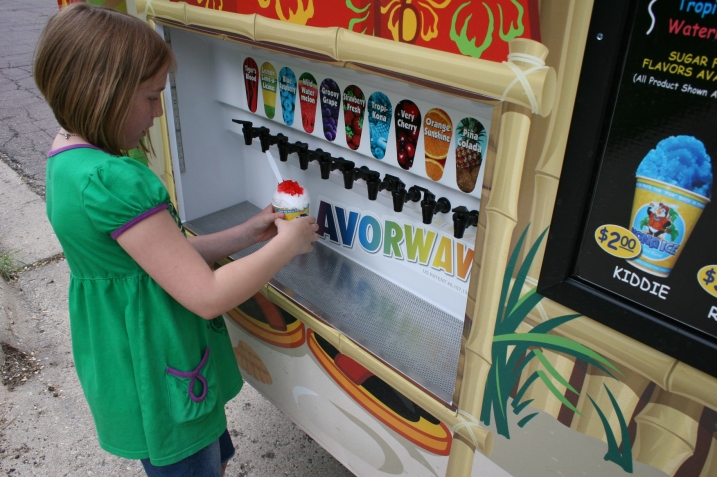 A neighbor girls flavors her shaved ice at the self-serve Flavorwave dispenser.

With prices ranging from $2 for a kiddie size to $5 for an oversized color-changing plastic cup (which you can bring back for $3 refills), Todd notes that Kona Ice is an affordable treat. 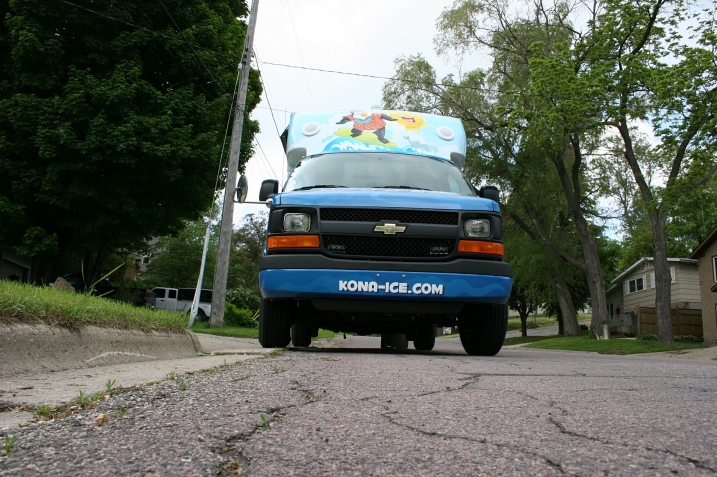 Parked on the side street by my house Wednesday afternoon.

As much as this new businessman raves about the product, it is the fundraising aspect of this company which sold him on purchasing a Kona Ice franchise, the fourth one in Minnesota. Two are based in the Twin Cities metro with the third in Duluth.

Ask Todd to show up at a fundraiser for your school, sports team, nonprofit or such and he’ll cut you a check for 20 percent of his sales before he drives away.

This is where the story of this life-long Faribault resident, without full-time employment since February 2010, gets personal. Todd remembers the kindness of a local businessman who hand-made a uniform for him when he joined the community’s first traveling basketball team. There was no uniform to fit the five-foot, 10-inch tall middleschooler, towering above his teammates, until the kind man stepped up to help.

“I never forgot that,” Todd says.

For that reason, he is eager to give back, to help kids. He’s been a player and a coach, raised two now college-age sons, Marshall and Logan. They will assist with the business as will wife Gail, a Christian day school teacher. He understands fundraising. That giving back to the community proved the pivotal selling point for his mobile franchise which covers the region from south of Owatonna into the Farmington and Lakeville area.

Nationwide, Kona Ice expects to reach $10 million in givebacks to communities in more than 40 states by the end of 2013. 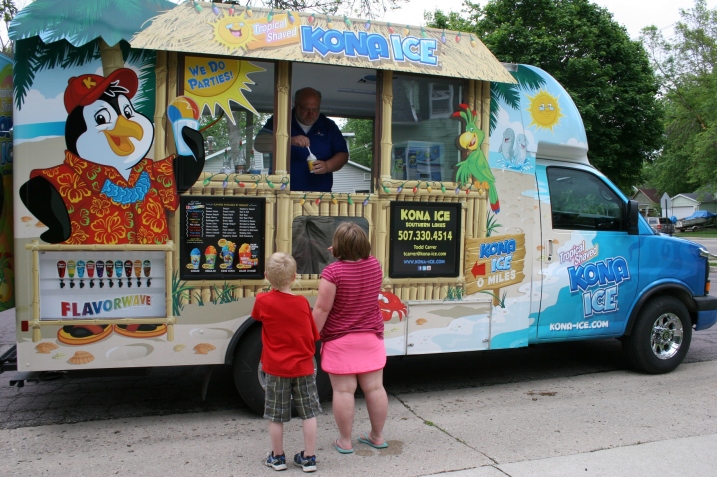 The characters which are part of the Kona story are displayed on the colorful truck.

Todd also likes the educational aspect of Kona Ice—which offers an app with games for kids—and the fictional storyline of Kona the penguin (from the island of Gooba Jooba) and friends Crabbington, Squawksworth (a parrot), dolphins Splish and Splash, and Solomon the Sun.

This new franchise owner brings experience vending county fair concessions in high school, a background in finance as treasurer at his church, a long-time desire to own a food-related business and an enthusiasm for working with people to Kona Ice Southern Lakes. 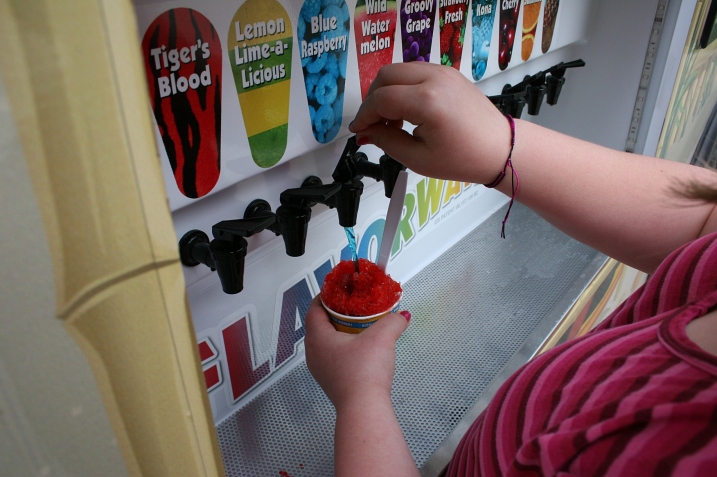 Todd advises customers to count to three as they dispense flavor onto the ice, to get the right amount of flavoring.

Just days into vending, Todd’s already served Kona Ice at a daycare graduation—driving across town to get his truck, tempering his ice to April snowfall snowball consistency and arriving within 50 minutes of getting the request.

Mostly, he’s meandering through Faribault neighborhoods, like mine, with that “beautiful billboard” of a truck, introducing adults and kids alike to Kona Ice. 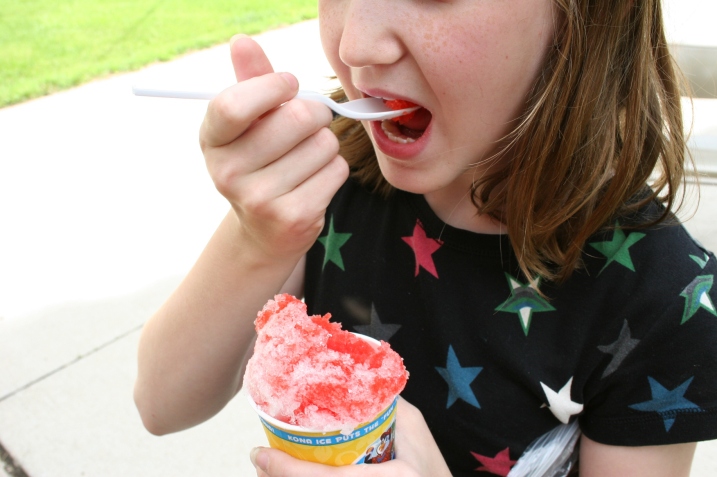 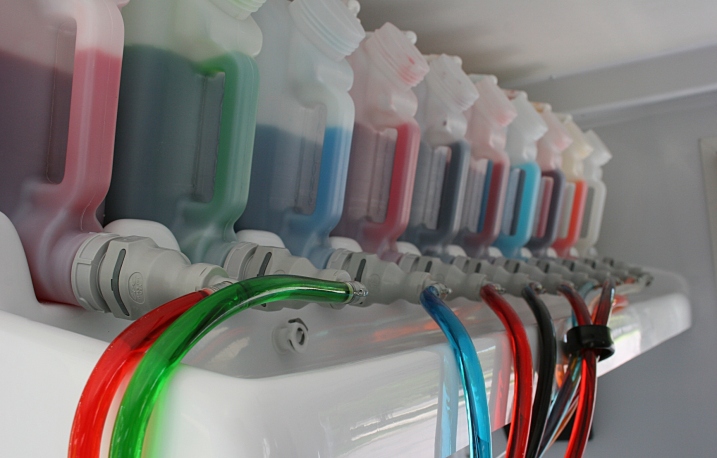 Flavor jugs and dispensing system inside the truck.

FYI: To book Kona Ice Southern Lakes for your next fundraiser, contact Todd at tcarver@kona-ice.com or call (507) 330-4514. Please tell Todd I sent you.

Click here to reach the company website and learn more details about every aspect of Kona Ice.