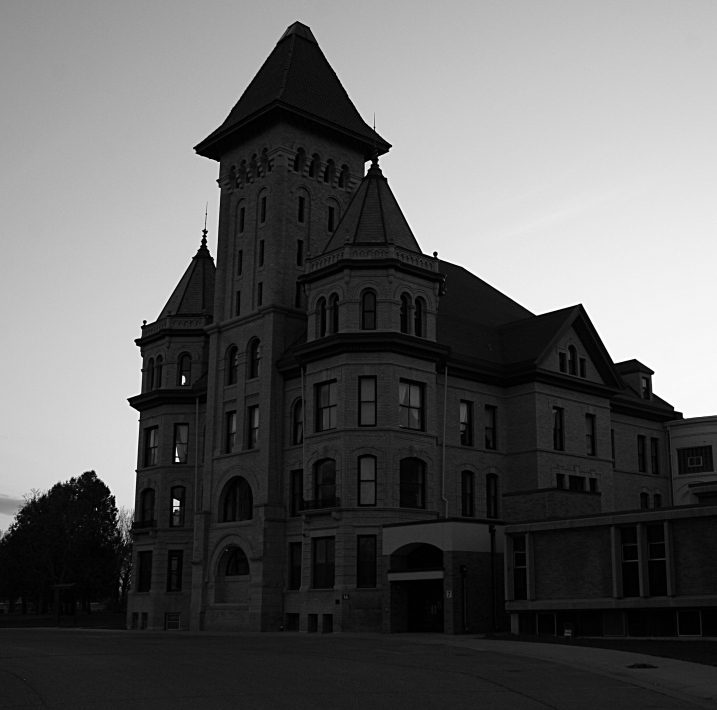 Daylight was fading as I snapped this photo of the anchor building on the former Fergus Falls State Hospital/Regional Treatment Center campus in mid May. 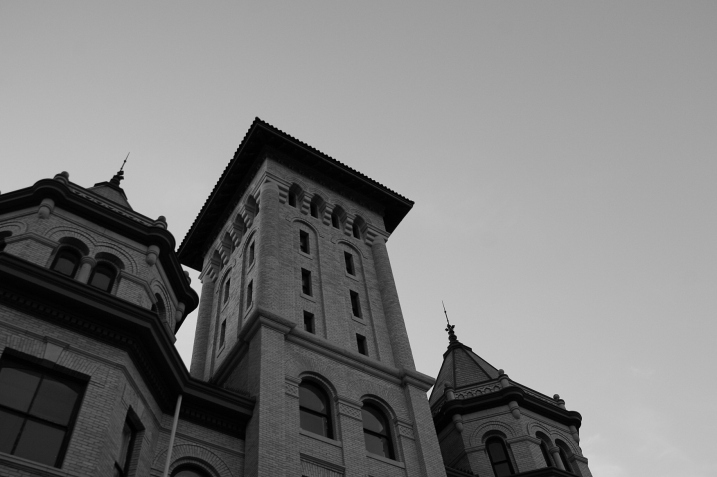 That marked my initial reaction upon viewing the towering, turreted and massive buildings on this west central Minnesota campus in mid May.

But I expect that the historical use of this place would tell a different story. In 1885, the State of Minnesota commissioned this as the Third State Asylum for the Mentally Ill. The word “asylum,” for me, evokes negativity. Eventually, the complex would also be home to those with developmental disabilities, chemical dependency issues and psychiatric illnesses.

One can only imagine the personal struggles and challenges faced within these walls. In those early days, I imagine treatment was not always the best or the most informed. I do not know this specific to the Fergus Falls center, only from my general knowledge of such large-scale public facilities of decades past.

Eventually, those who lived here were moved into smaller community-based facilities. 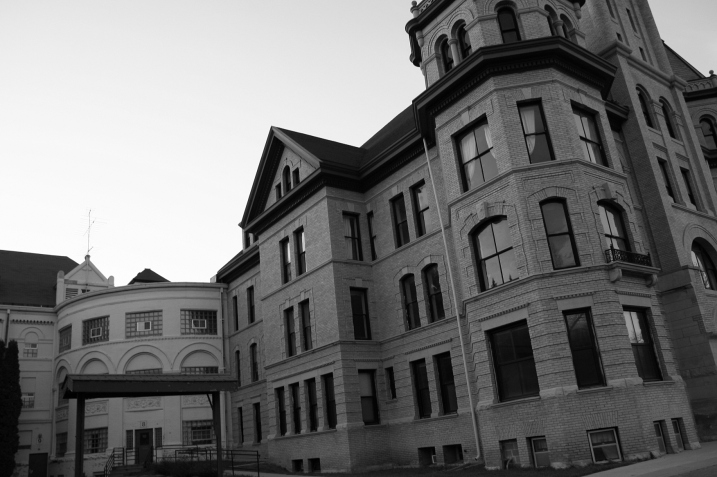 Wings connect to the main building. These buildings are labeled as Kirkbride buildings after Pennsylvania psychiatrist Dr. Thomas Story Kirkbride who believed in the role of environment in promoting healing among mentally ill individuals.

Today the City of Fergus Falls still owns most of this campus, purchased in 2007. And just last week, according to draft city council minutes published on the city’s website, the Fergus Falls City Council passed a resolution “authorizing the city to enter into a Letter of Intent with Historic Kirkbride LLC as a developer for the Regional Treatment Center, subject to financial disclosure…”  Historic Kirkbride’s estimated $41 million proposal calls for a 120-room first class hotel, several restaurants and 60 market rate apartments.

The planned development is expected to bring temporary construction jobs and an estimated 190 full and part-time positions to Fergus Falls. 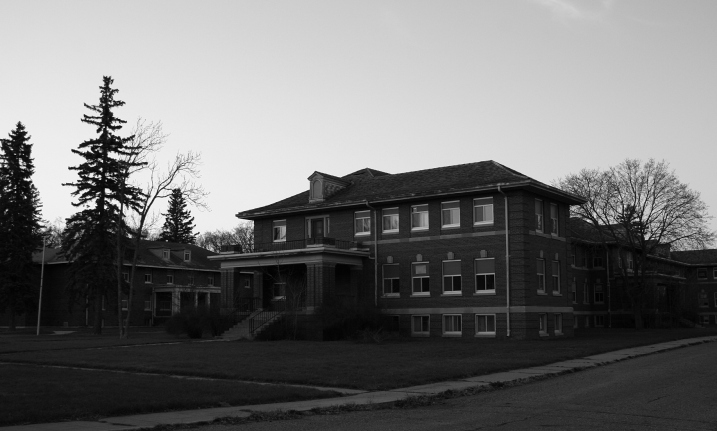 Even the individual brick buildings impress.

The Kirkbride proposal seems an ambitious undertaking, but one worthy of this beautiful complex of architecturally pleasing buildings and an equally pleasing natural environment. Principals of the Kirkbride team bring experience to the Fergus Falls project with more than two dozen historic renovation projects completed over 33 years, according to presenter Ray Wiley of Georgia-based Historic Properties Inc.

Of course, as in all such projects involving historic buildings and lots of money and government entities and private investors, this isn’t a done deal. If all progresses as planned, though, the 120-room hotel, restaurants, apartments and more are projected to open in December 2015. 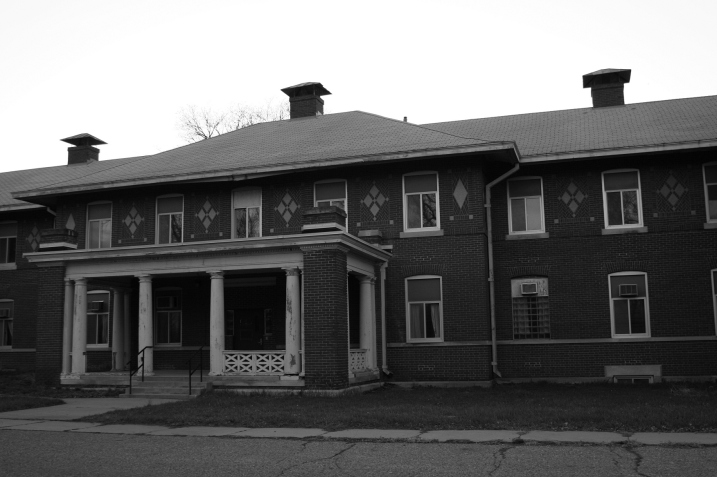 The complex includes a cluster of two-story brick buildings.

I expect plenty of skepticism exists over whether the planned project presents the best use of the property, will succeed, or will even get off the ground.

The Kirkbride proposal was one of two presented to the council last week. The other, from Twin Cities-based Colonade Design Group, proposed a wellness center serving those dealing with diabetes and obesity (and included a food and nutrition program); a hotel for participants; artisan flats and studios; services for returning veterans; condos; event space; greenhouses; and more.

Click here to read details of the two proposals, public input and more from the June 12 special city council meeting.

Based on my two visits to Fergus Falls in recent years, the Historic Kirkbride project certainly has the potential to succeed. For one, this Otter Tail County seat city sits along Interstate 94, an ideal location to catch travelers in need of a respite. It’s the last sizable town westbound motorists pass before reaching Fargo an hour away. That, though, is not enough.

The community possesses an artsy vibe with galleries and a theatre and historic buildings and arts events in a charming downtown that hugs the Otter Tail River. It’s a college town with Minnesota State Community and Technical College and is also a regional center of commerce and of healthcare.

Developers will need to market those strengths, the historical aspect of the former treatment center, and the natural scenic beauty of this lake region. That’s a given.

Future guests will need to envision Kirkbride’s hotel as a get-away because, otherwise, this will be just one more hotel (albeit an historic one classified as “first class”) in one more town along the interstate.

WHAT ARE YOUR THOUGHTS on Historic Kirkbride’s plans for the former Fergus Falls State Hospital/Regional Treatment Center? Can something like this succeed in Fergus Falls? 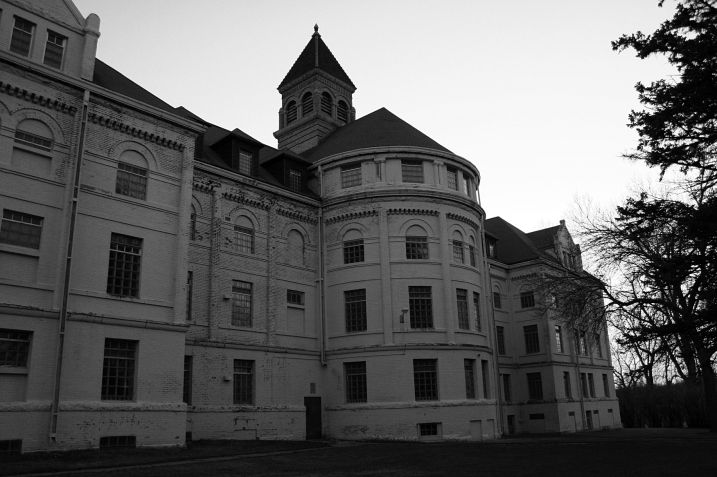 The sun sets on this beautiful campus.

FYI: The Fergus Falls complex is open for free public tours on Friday afternoons during the summer. Reservations are required. Phone Maxine and Gene Schmidt at (218) 736-5328. I was, unfortunately, not in Fergus Falls on a Friday afternoon and unaware then of the tours offered.

Click here to read Colliers International listing of the property.