I DON’T KNOW if I was more thrilled with her win, or mine, in the 2014 Mankato Poetry Walk and Ride competition.

A graphic I created for Mankato Poetry Walk and Ride.

But when I saw 12-year-old Hannah Leraas’ name in the list of fourth through seventh grade division winners, I whooped out loud. Yes!

Hannah joins me and 20 other writers whose 35 winning poems will be posted soon on poetry sign boards in parks and along trails in Mankato and North Mankato. Additionally, poems by three selected notable area poets will also be published. Submitted poems were anonymously judged by noted League of Minnesota poets Bethany Barry, Charmaine Donovan and Peter Stein.

My poem, “Off to Mankato to ‘get an education'”, posted near Glenwood Gardens in 2013.

This marks the second year of this competition and I’m delighted to once again be part of an effort that brings poetry to the public in an unassuming way. Two of my poems were showcased last year.

Now my poem, “Bandwagon,” based on the John Deere Bandwagon television show originating in Mankato, will be displayed in Lions Park North. Hannah’s poem, “Snow,” will be located on signage in Sibley Park West. 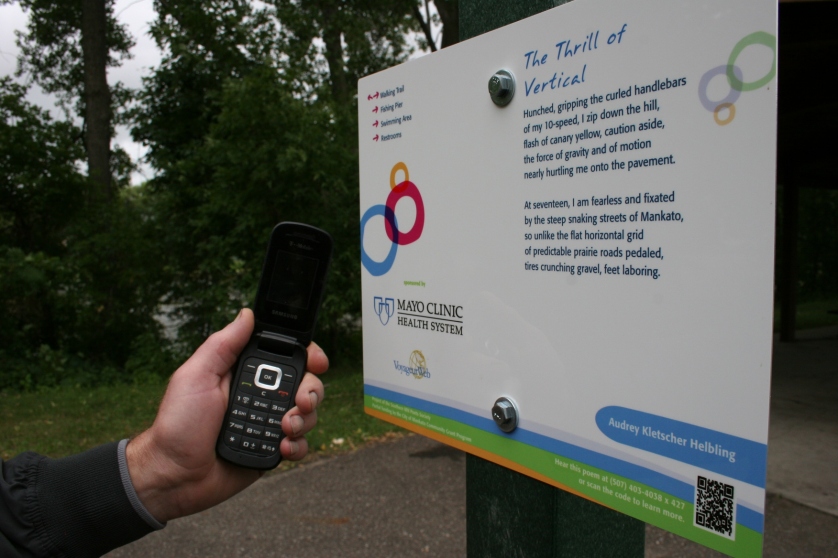 My husband and I listen to one of my selected poems in 2013.

Additionally, QR codes and phone numbers will be posted, allowing the public to hear poets read their works.

But for now, I want you to read, Hannah’s poem:

I woke up to see,
And it fills me with glee,
As I stepped out of bed
I suddenly said,
“I need to hurry!”
I dressed in a flurry,
Dashed down to the door.
My snow pants I wore.
Like an airplane in flight
I flew with pure delight…
SNOW!

The mentor in me is thrilled that Hannah chose some strong verbs like “stepped” and “dashed.” She could have written “got” or “ran,” verbs that are not nearly as powerful.

But my favorite part of this homeschooler’s poem is this: I dressed in a flurry.

The double meaning of that word, “flurry,” referencing both action and snow, truly impresses me. Hannah understands the power of language.

As soon as the snow began, my neighbor girl was outside building a snowman and a snow fort. Minnesota Prairie Roots file photo, February 2014.

And then there’s the imagery—can’t you just visualize Hannah flying out the door and into a snowy world?

And why? Snow, this thoughtful poet explains, is like a blank sheet of white paper upon which to draw pictures or write with a stick. There’s another poem in that response.

When’s the last time you thought about writing with a stick in the snow? Been awhile, hasn’t it?

Hannah is, not surprisingly, excited. Here’s her reaction to winning: “Like seriously, are dyslexics supposed to get published?”

Yes, this pre-teen struggles with letters and numbers and sentences. But that hasn’t stopped her from writing poetry, which she says helps with reading and writing and has improved her spelling. You have to admire her determination.

There were a few rules to follow in entering this contest which was open to writers living within a 50-mile radius of Mankato. Each poem could be no more than 18 lines with 40 characters or less per line. That’s a challenge, to write within such strict confines.

Hannah, who’s been penning mostly rhyming poems for about two years now, turns to her thesaurus—the one I gave her—to find the perfect descriptive words for her poems. I praised her for using that reference book, one I tap into often also.

She’s an enthusiastic poet who shares her favorite line from her favorite poem, one about Bob, a cuddly toy monkey she received one Christmas from her parents, Jesse and Tammy.

In writing that poem, she thought of the flying monkeys in the “Wizard of Oz” and then her beloved Bob:

…the big squishy guy,
the one who can’t fly…

FYI: For more information about the Mankato Poetry Walk and Ride, click here. Once our poems are posted and Hannah and I get to Mankato, I’ll post photos of us with our poetry signs.