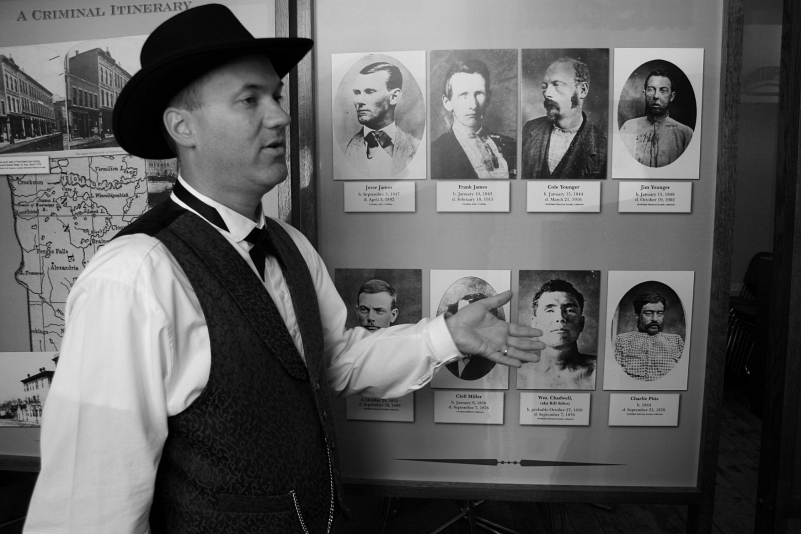 To say folks in Northfield, Minnesota, appreciate local history would be an understatement.

Take Christian Hakala. He has a Master of Arts in history, has taught history, has served as Northfield Historical Society Board president and volunteers as a tour guide.

During his day job, he’s Director of Individual Giving at Northfield’s Carleton College.

It was in his capacity of NHS tour guide that I met Hakala in September 2012 as he walked visitors through the “Attempted Bank Raid” exhibit. That would be the September 7, 1876, attempted robbery of the First National Bank of Northfield by the James-Younger Gang. A bank cashier, a Swedish immigrant and two of the outlaws died in seven minutes as townspeople fought back.

Northfield this week is celebrating the heroism of locals during the annual The Defeat of Jesse James Days, an event which is among Minnesota’s most popular community celebrations. DJJD includes bank raid re-enactments. Hakala has participated in those, too, role-playing a townsperson.

If you appreciate history and drama and community celebrations, then head on over to Northfield this weekend. This beautiful historic river city knows how to showcase local history in a big way.

FYI: Click here for more details about The Defeat of Jesse James Days.

Minnesota Faces is featured every Friday on Minnesota Prairie Roots.