When watching high school football is about more than just the game November 2, 2015 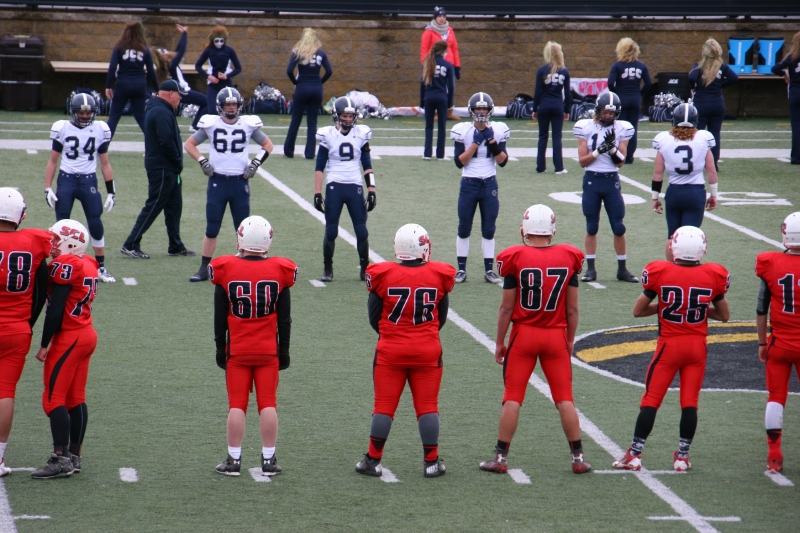 The St. Croix Lutheran Crusaders and the Jackson County Central Huskies line up on the football field before the game starts Saturday afternoon.

I DRESSED IN MY BUFFALO PLAID red and black on Saturday. Not because I wanted to portray Mrs. Paul Bunyan on Halloween. Rather, I was showing my support for the St. Croix Lutheran High School football team which Saturday afternoon competed against Jackson County Central in state play-offs. My nephew, Stephen (number 87), plays tight end for the red-attired Crusaders.

Sometimes the action looked like nothing but a pile of players to me.

While the St. Paul based school pushed hard to win, they couldn’t defeat the Huskies, a husky and formidable team from southwestern Minnesota. The final score: 44 – 26. 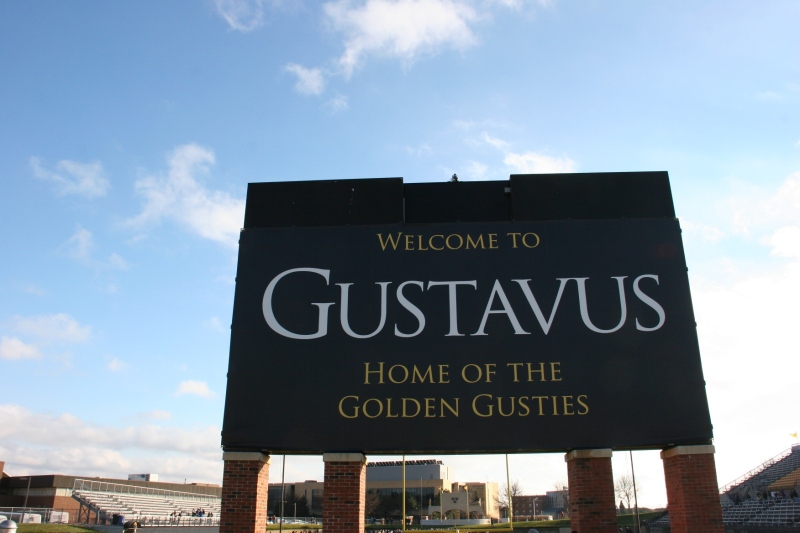 The back of the Halloween themed sign held by the JCC cheerleaders. 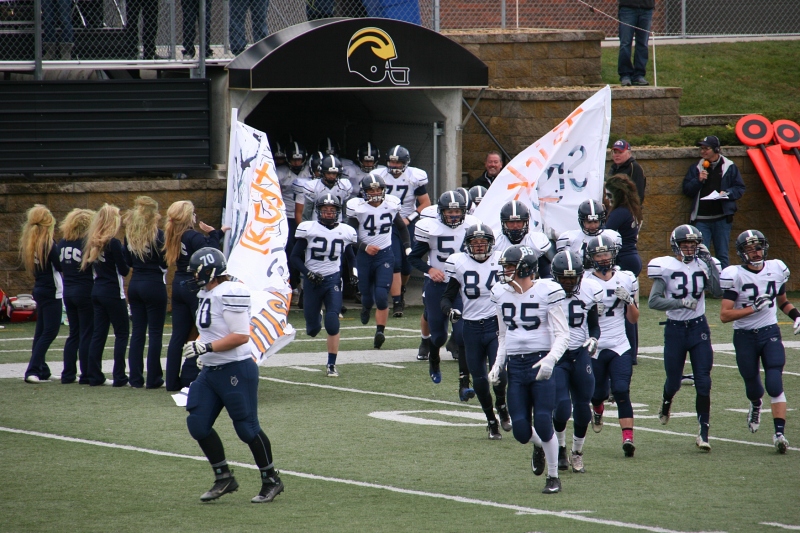 JCC players run through the sign and onto the field for the start of the second half.

Certainly, seeing my nephew’s team win on the football field at Gustavus Adolphus College in St. Peter would have been a Halloween treat. But, JCC dominated, proving the truth in the words the players busted through before starting the second half:

Trick or treat, smell our cleats. The Huskies can’t be beat. 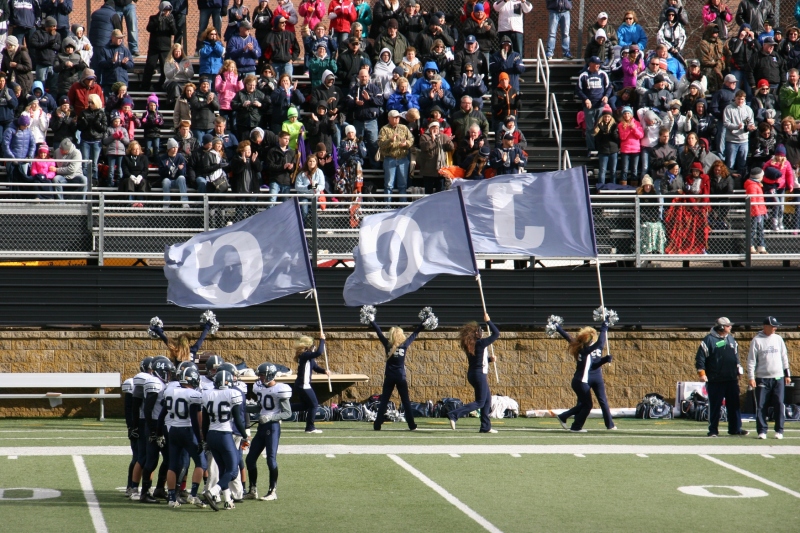 JCC cheerleaders fire up the crowd.

Crusaders fans, including Winnie the Pooh. Some students dressed in Halloween costumes.

My brother, right, and friends watch the game.

The spirit of JCC fans, led by enthusiastic cheerleaders, impressed me. Not that Crusaders fans weren’t supportive. We were. I can vouch for my sister-in-law’s continual encouraging screams. My youngest brother stood behind us, several bleacher rows away in an aisle, chewing gum super fast and focusing his eyes on the field the entire game. St. Croix Lutheran came with a pep band. But no cheerleaders. Students seemed subdued for a play-off game.

Occasionally, the clouds parted and sunshine shone upon the football field.

Ready for action…that’s my nephew, Stephen, #87 in the front.

Crusaders fans cheer on their team.

I’m a quiet fan, too. I was here on this Saturday to support my nephew. Not in a super vocal way. Simply by my presence. If his team won, good. If they didn’t, they didn’t.

The Crusaders huddle on the sidelines.

A ref makes a call.

I found myself studying the varying footwear and leggings.

Repeatedly during breaks in the action, the announcer emphasized respect as highly-important in competition. I value respect; both teams showed respect for each other. But, bottom line, these teams play to win. That’s why they’re on the field.

It is easy, when you are as far behind as the Crusaders were during the game, when plays just aren’t working, when the other team repeatedly scores, to give up. I felt that in a sense Saturday. JCC was the stronger team. Even I, someone who does not watch football much, could see the Huskies’ dominating power.

A JCC player prepares to throw the football, left.

This is the first football game I’ve attended in probably 40 years. I don’t know many of the nuances of the game. But that’s OK. I understand the basics. 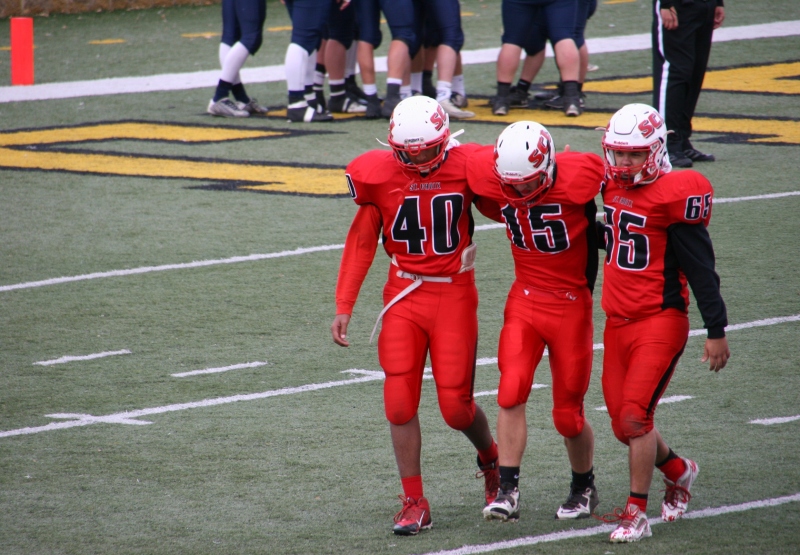 Several Crusaders players left the field with injuries. Here teammates support one another.

And I understand the value in being with family—on this Saturday four of my five siblings and their spouses—to support Crusaders number 87. This is what families do. They support and encourage one another. In good times and difficult times.