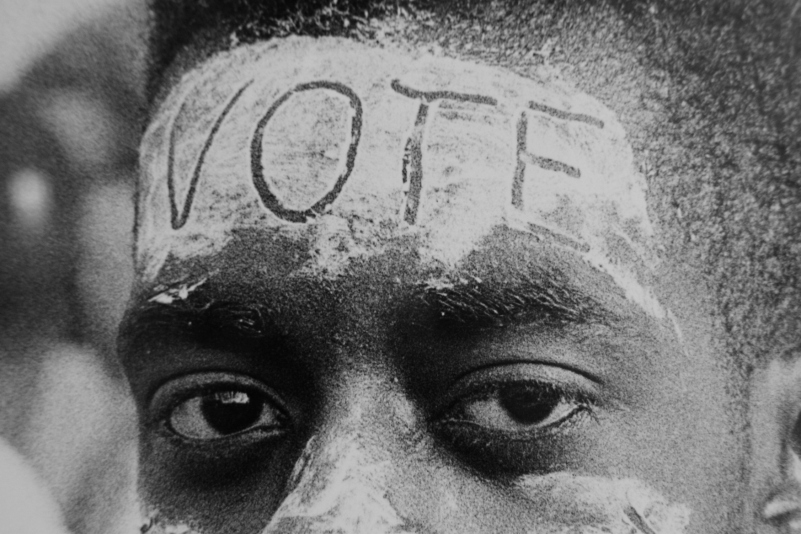 The Voting Rights Act of 1965 helped African Americans exercise their right to vote under the 15th Amendment to the Constitution. Stephen Somerstein photographed Bobby Simmons, a member of the Student Nonviolent Coordinating Committe. Simmons was wearing zinc oxide to prevent sunburn and wrote VOTE onto his forehead. This photo shows a section of Somerstein’s portrait of Simmons showcased in an April 2015 exhibit, “Selma to Montgomery: Marching Along the Voting Rights Trail,” at St. Olaf College in Northfield. I photographed the photo with permission. Minnesota Prairie Roots file photo 2015.

DO YOU REMEMBER a time when elections were focused primarily on the issues? Minimal or no name-calling? When candidates acted like anyone mattered outside of themselves. When candidates treated each other with decency.

Yeah, I know. It’s difficult to remember that in a year dominated by such campaign negativity. On all levels, not just national.

No matter where you stand, what you think, how frustrated you are, remember this. You have a voice. Use your voice today. Vote.

There was a time when not everyone in this country could vote. On Election Day 1920 women voted for the first time after the 19th Amendment to the Constitution was passed, giving them that right. And now a woman is on the ballot for President of the United States.

No matter which candidates you support today, remember, you are free to vote. And that is something for which you can be especially thankful. You have that democratic right. Use it. Vote.