Up close with Santa & his Santa Mobile in southern Minnesota December 11, 2017

IN ALL MY YEARS of writing, I’ve never interviewed Santa. That changed after I spotted Santa’s wheels recently in the parking lot of a Faribault retailer. I grabbed my camera and photographed the cherry red Cadillac marked by SANTA 1 vanity license plates and an array of festive adornments.

But I needed more. I needed to learn the identity of Santa and hear his story.

This sticker on the Santa Mobile led me to Dave Kelley.

So I phoned 75-year-old Dave Kelley, a professional Santa since 2010 with the help of his wife, Judi. The couple was doing laundry and baking cookies on the mid-week morning I called their Eagle Lake home. Even Santa needs to catch up after a busy weekend. Dave’s gigs average 35 – 45 a holiday season at company gatherings, private parties, senior citizen homes, daycare centers, charity events and more in a region of southern Minnesota stretching from Fairmont to the Twin Cities. On the day I saw the Santa Mobile, Dave appeared at Faribault Harley Davidson. 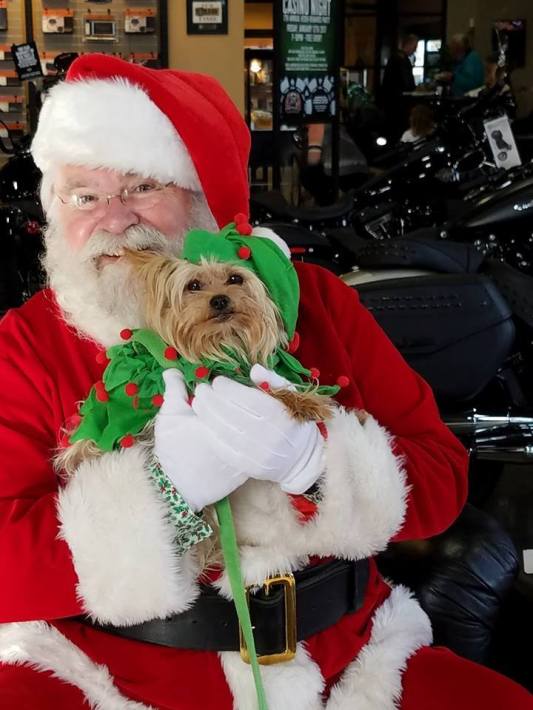 In our lengthy conversation, this retiree’s love of and satisfaction in being Santa shone as bright as Rudolph’s shiny red nose. His satisfaction comes in meeting people’s expectations of Santa. “There is no such thing as Santa,” Dave says, explaining rather that he is the personification of Santa, of all the lore and stories and individual expectations people hold.

Yet, if a child asks whether he’s the real Santa, this great grandfather replies without hesitation, “Yes, I am.”

It took the Kelleys five years to get the SANTA 1 plates previously licensed to someone else. Throughout his life, Dave has worked a wide variety of jobs from farmer to lawyer to pet store owner to safety adviser at a manufacturer and more. When he tried on a Santa suit for the first time in 2009, he liked it. That led him to become a professional Santa.

He looks, he notes, like a Nordic Santa, the Coca Cola Santa, not a polished plastic Hollywood version. And that appeals to Minnesotans. Because he looks like Santa even without his hair styled, his beard curled or his red suit, Dave always stays in character. It wouldn’t do, he says, for an impressionable child to see Santa drinking a beer at a restaurant or to hear Santa using bad language.

Take the time Dave and Judi were vacationing in Key West. A family approached them on the beach, their son wanting to meet Santa. Five years later, the now 10-year-old boy still calls the Kelleys several times a year to inquire about the reindeer or Mrs. Claus or whatever.

Dave’s thoughtful approach to playing Santa impresses me. Rather than tower over children, he gets down to their level. And rather than booming the traditional ho, ho, ho, which he says are “hard sounds,” he uses the more gentle Merry Christmas accompanied by a chuckle.

He aims to be unintimidating, gentle, kind and pleasant. “Santa can never be grumpy.”

Even when the kids are grumpy, this Santa maintains his composure. He refuses, he says, to be part of photos that will traumatize a terrified and crying child. Sometimes he can duck into a photo unnoticed while a parent holds a child. If not, he won’t, suggesting instead that the parent wait a year and try again. 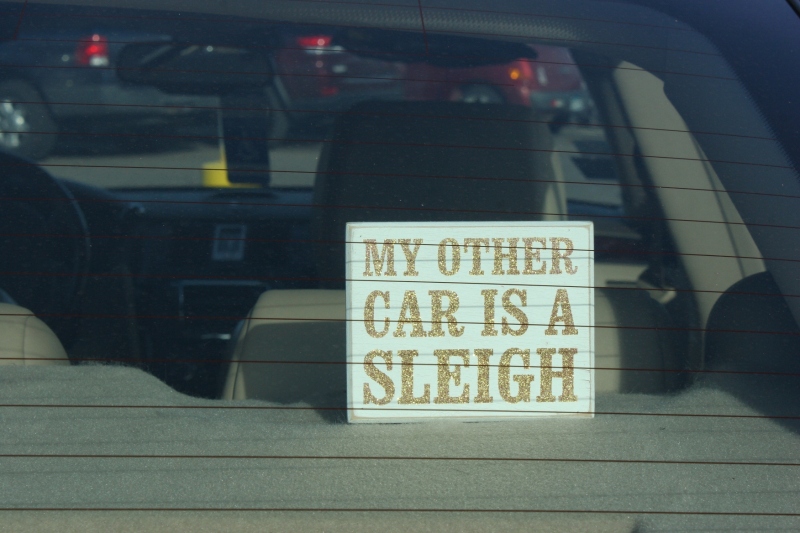 He has a little fun with kids questioning the existence of Santa. Dave seeds doubt in their minds, telling them Santa gives underwear and socks to those who don’t believe. Likewise, he’ll nudge kids toward kindness, toward thinking about more than what they want under the Christmas tree. “Would you like me to bring something for your sister, too?” he sometimes asks.

While interacting with more than 2,000 kids each holiday brings Dave joy, his time with seniors in memory care units brings him the deepest joy. There’s nothing, he says, like taking these elderly to a place they haven’t been in 65 years—back to memories of Santa. 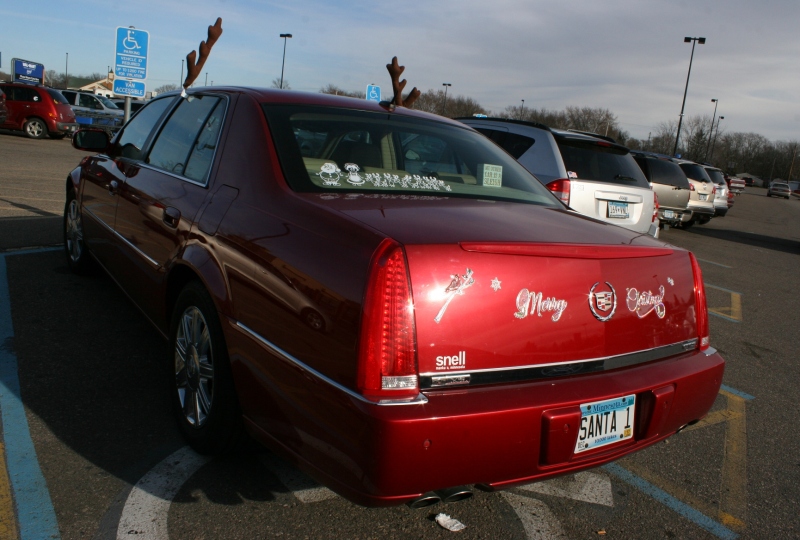 The Merry Christmas signage and the antlers don’t go onto Santa’s car until Thanksgiving Day. Dave decks out his car just for fun, not necessarily to advertise.

His work as a professional Santa allows him to go places, too, to afford a nice winter trip out of Minnesota with Judi. Dave welcomes the much-needed retreat after weeks of engagements and hundreds of miles traveled in his decked out Santa Mobile.

FYI: Click here to learn about Dave Kelley and other “real bearded” Santas in Minnesota at Internet Home of the North Star Santas.