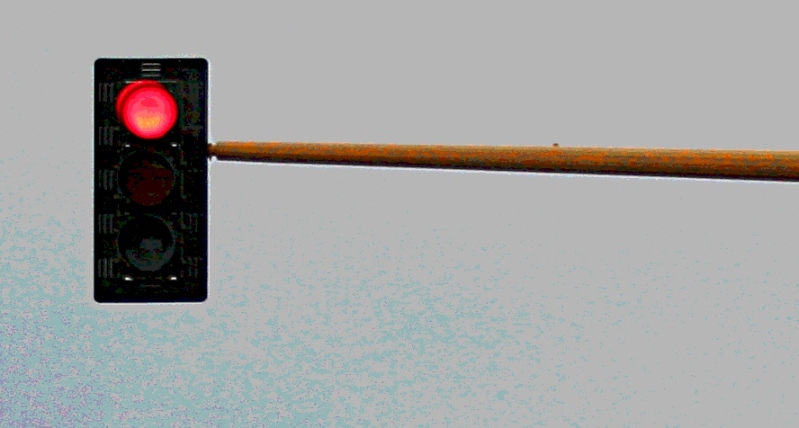 While there are no stoplights along the street referenced in this post, I use this illustration to make a point: Please stop for pedestrians. Minnesota Prairie Roots file photo.

I LIVE ON A BUSY STREET, an arterial route through Faribault that sees a high volume of traffic, especially during the morning rush hour, after school rush and evening rush. Laugh if you wish. But I’ve lived here long enough—nearly 34 years—to know. Good luck trying to pull from a side street or back out of your driveway onto Willow Street during those times of day. It’s nearly impossible.

That brings me to the issue I wish to discuss. Pedestrian traffic. What if you were a kid trying to cross this high traffic roadway to reach your bus stop or to walk to school or back home?

On a recent Thursday morning, I observed a teen a block away waiting for a lull in traffic so she could cross Willow Street. She waited and waited and waited. And then waited some more. Why wouldn’t anyone stop? It was clear she needed to cross given her poised position at the edge of the curb and at an intersection.

A biker squeezes around a bus in busy Davis Square. Minnesota Prairie Roots file photo May 2016.

If this was Boston, she would have stepped right into the traffic lane regardless of oncoming traffic, regardless of anything. I wouldn’t advise that. When visiting Davis Square two years ago, I waited for the light to turn green rather than disobey the traffic signal. All the other pedestrians swerved right around me, crossing against the light. Clearly I did not understand that pedestrians claim the streets of Boston. But Minnesota is not Boston. So we wait, yielding to motor vehicle traffic.

Even with a crosswalk law in place in Minnesota, I don’t see much change in drivers’ attitudes toward pedestrians. The Minnesota Safety Council notes key parts of that law, which you can read by clicking here. The Council suggests a common sense approach to determining when/if it’s safe to cross a roadway.

Common sense. As I watched a steady stream of vehicles pass the student hoping to get to school on time, I wondered if anyone would ever stop for her. Finally, a school bus stopped, a signal for southbound traffic to also stop. Finally, after five-plus minutes of waiting, she could be on her way.

There was a time when walking across Willow Street was a bit easier, a bit safer. Before an elementary school just blocks away closed, an overhead crosswalk sign with flashing yellow lights signaled drivers to slow down and stop for kids. Shortly after Garfield Elementary shuttered decades ago, that signage was removed. I’ve often wondered why given the many kids and other pedestrians who still attempt to get across this high traffic street.

I have a personal reason for feeling strongly about this issue. In May 2006, my then 12-year-old son was struck by a car while crossing Willow Street on the way to his bus stop. He escaped with only minor injuries. Granted, he was crossing in the middle of a long block rather than in a crosswalk, not the best idea. Still the driver of the car that hit him never stopped and has never been found, despite multiple witnesses.

In the 12 years since, nothing has changed. The high volume of traffic remains. Kids still struggle to cross this busy roadway on their way to and from school. I suggest drivers in Faribault practice some Minnesota Nice, just like that school bus driver who realized that a teen waiting on a corner needed to cross the street on a Thursday morning.

Also click here to read about a Faribault student who was struck by a vehicle while crossing another busy city street on her way to school in October 2017. Lul was seriously injured.