WHETHER YOU LOVE pets, BBQ, art and a whole lot more, you will find it all in Faribault during the next four days. It’s as if my Southern Minnesota community has been saving a summer’s worth of activities for one weekend plus Thursday.

These students were hammering and chiseling away during a class, making quite a racket in the ice arena/fest site during the 2012 festival. Minnesota Prairie Roots file photo 2012.

Events kick off Thursday evening with Minnesota’s annual woodcarving festival, Carv-Fest, opening in the Faribault Ice Arena at North Alexander Park. Expert woodcarvers teach classes and the general public is free to wander and observe. Faribault is home to noted woodcarvers from the Whillock family (who organize this event) and Marv Kaisersatt. The fest runs Thursday – Saturday. 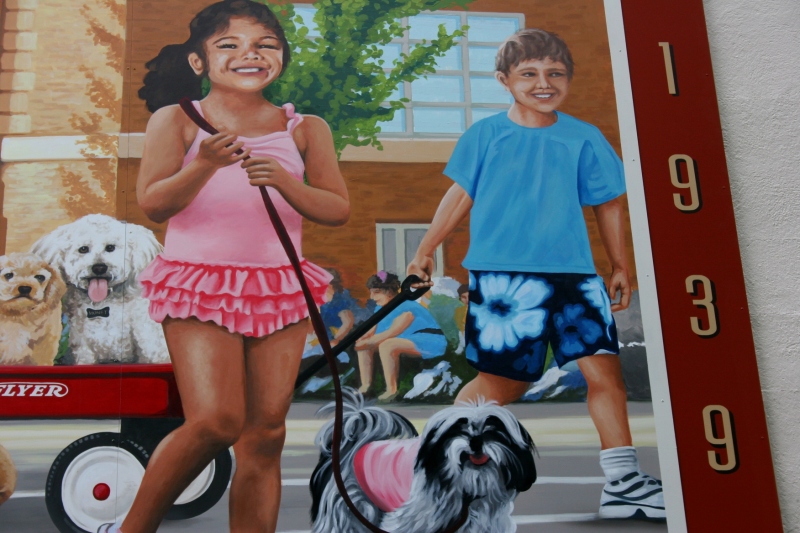 A section of the Pet Parade mural on the bandshell in Faribault’s Central Park. Minnesota Prairie Roots file photo.

As dusk settled, volunteers begin lighting the luminaries which wound around the Rice County Fairgrounds during the 2012 Relay for Life.

Friday brings the 23rd annual Relay for Life of Rice County. Several times I’ve attended this gathering to honor and remember those who have faced cancer and to raise monies and awareness. Most impressive are the honorary luminaries circling the fairgrounds. Activities begin at 4 p.m. and continue late into the evening with closing events the next morning.

Saturday promises to be a jam-packed day in Faribault beginning with the Run Baby Run! 10K, 5K and kids run sponsored by the Pregnancy Options LifeCare Center in support of life. Registration runs from 7:30 a.m. – 8:15 a.m. at Roosevelt Elementary School.

Bikers and others gather for a post hospice ride party at Faribault Harley-Davidson in 2012.

Across town The Ride for Hospice at Faribault Harley-Davidson begins with bikes and cars leaving mid-morning. From noon to 2 p.m., there will be food, music and prizes at the Harley shop. 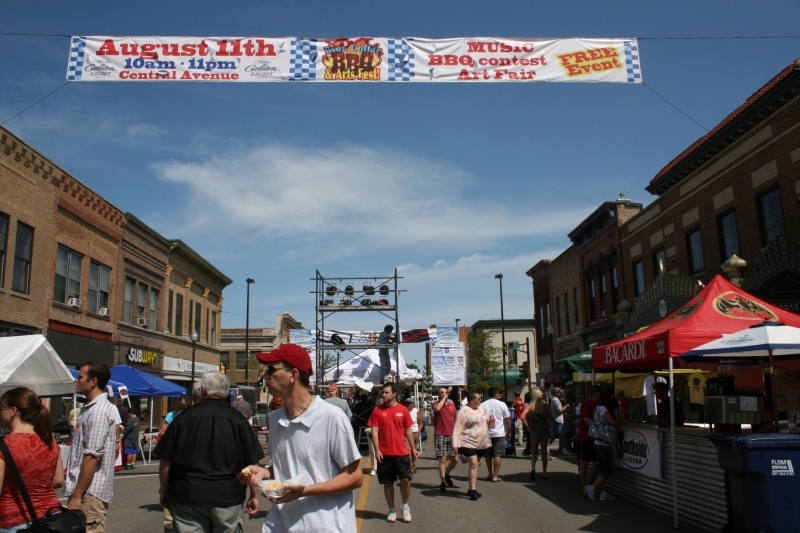 A street scene from the 2012 Blue Collar BBQ & Arts Fest.

Meanwhile, in the heart of historic downtown Faribault, art and food lovers will gather for the annual Blue Collar BBQ & Arts Fest from 11 a.m. – 11 p.m. There’s a BBQ competition, plenty of food vendors, an art/market fair, recycled art sale, music, kids’ activities, washer tournament and beer garden. The fest raises monies for the Paradise Center for the Arts and the Faribault Mural Society.

And if that isn’t enough. Bethlehem Academy, the Catholic school in town, chose this weekend to celebrate its 150th anniversary. 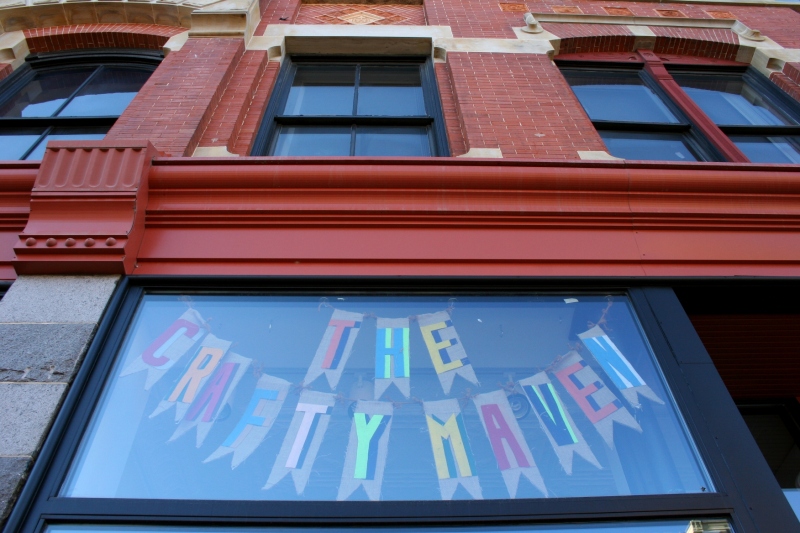 Crafty signage suspended high in a window at The Crafty Maven hints at the crafty goodness you will find inside this historic building. Minnesota Prairie Roots file photo.

Aside from all the organized activities, Faribault is worth a visit for its historic downtown with quaint shops. Among my favorite is The Crafty Maven which is across the street from a new bakery, Ginger Spice Bakery, 209 Central Avenue. The bakery opens its doors on Friday.

And for you beer lovers, check out F-Town Brewing.

Things are happening in Faribault. I just wish everything wasn’t on the same weekend.

I GREW UP ON A DAIRY and crop farm where cats and dogs roamed the property.

Although they were pets, they weren’t really pets. Rather, they were there to work. The cats caught mice. The dogs alerted us to wild animals and vehicles arriving in the farm yard.

My parents never bought cat or dog food. Table scraps, of which there were few from our family of eight, and a daily hub cap of milk warm from the cow nourished the cats and dogs.

Of course, we kids grew quite fond of dogs like Blackie, Shep, Rex and Fritz Carter Mondale Ferraro and Tommer the cat (why can’t I remember the names of more cats?), …

I recall dressing kittens in doll clothes and pushing them in a doll buggy.

There were endless attempts to teach the dogs to shake hands and fetch balls or sticks.

Spring always brought a search in the hay loft or haystack for newborn kittens.

Yes, my memories of felines and canines are mostly pleasant ones of working farm animals that sometimes allowed us to play with them.

As an adult, considering the cost and care, I’ve never wanted a pet. Plus, I’m just not the type of person who wants an animal living indoors and/or in town. I know I’m in the minority. But that’s OK. I’ll just admire and pet other people’s pets.

Titan, so active I struggled to photograph him.

The other night I met Titan, an adorable seven-week-old puppy, at the Spitzack farm outside Faribault. Puppies are so darned cute. Titan reminded me of the story my mom shared awhile ago. One recent afternoon a man from a nearby town arrived at the senior complex where she lives with nearly a dozen puppies for residents to pet and cuddle. He’d engaged the litter in active play so they’d be worn out. His strategy worked. Mom was so excited about a sweet, cuddly puppy falling asleep in her lap that you’d have thought she won the lottery.

Pets possess the power to comfort and heal and lift spirits.

This image shows a portion of the Pet Parade mural gracing the side of the historic bandshell in Faribault’s Central Park.

This evening, my community of Faribault holds its 78th annual Pet Parade beginning at 7 p.m. I can’t attend. But be assured, if you’re there, you’ll view plenty of cuddly cuteness.

DO YOU OWN A PET or have a favorite pet memory? Feel free to share.