Off the interstate in Mauston, Wisconsin: A community that’s dairy proud June 5, 2018

A glimpse of Mauston’s rural character.

IF YOU NEVER EXIT the interstate into a small town, you miss so much. Like the Cowtastic CowMoonity of Mauston. That would be in southwestern Wisconsin, just off Interstate 90/94 half-way between Minneapolis and Chicago.

A search for a picnic spot led Randy and me into this community of nearly 4,500 on a recent Saturday. After securing unclear directions to a park at a local convenience store/gas station, we ended up lost and seemingly headed out of town. 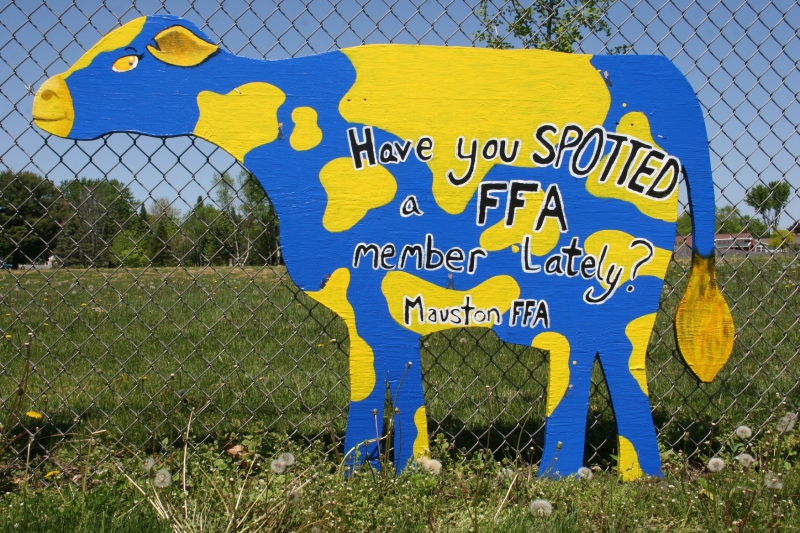 Then we happened upon the cows. And I momentarily forgot all about lunch, so excited was I over the herd curving along a ballpark fence. We’d just discovered, quite by happenstance, the Cowtastic CowMoonity Project of the Juneau County Dairy Promotion Council. At the under-renovation Mauston Lions Park, complete with picnic shelter, tables, restrooms and playground equipment.

After eating my turkey sandwich, clementine and yogurt—yes, yogurt—I headed over to the 60-head herd, camera in hand. You can bet this former dairy farm girl and former Redwood County, Minnesota, dairy princess candidate was excited.

It’s clear this community embraces all things dairy. This marks the fourth annual cow art project designed to promote the dairy industry via those cow cut-outs and panels of dairy facts and trivia. 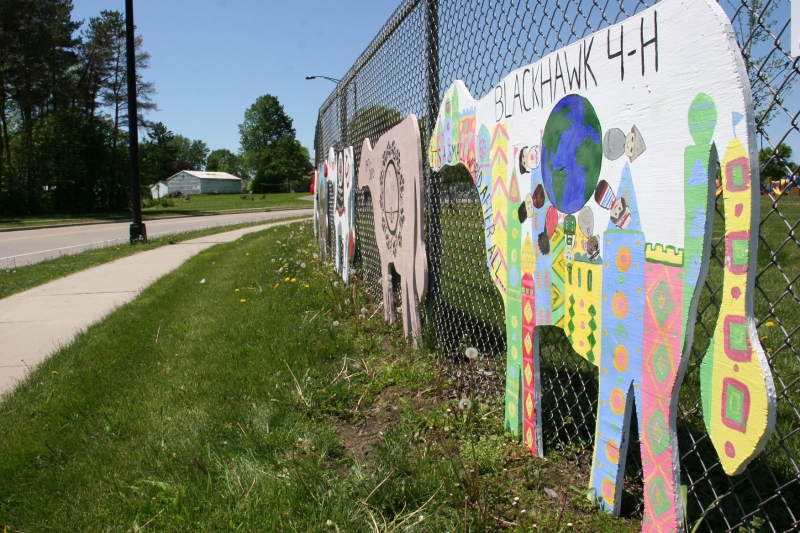 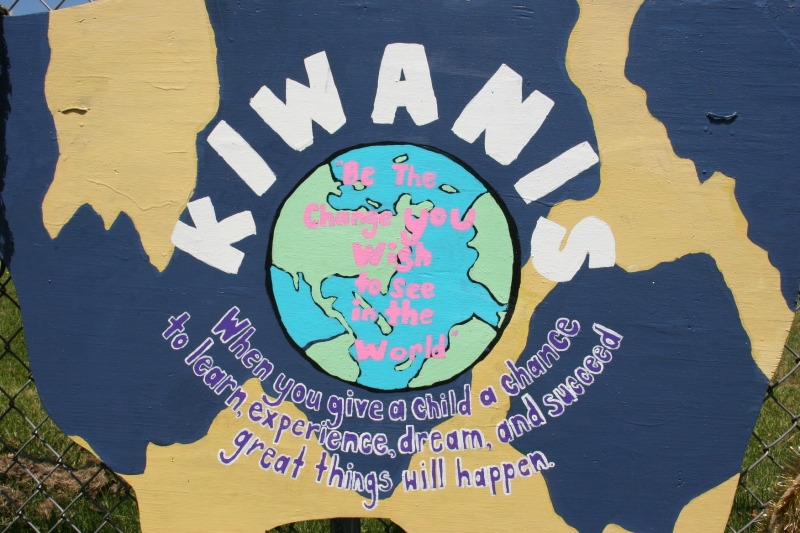 Nonprofits, youth clubs, organizations and businesses purchase plywood cut-outs and then create cow art showcased along the park fence during June Dairy Month. So this is about more than just agriculture. Cowtastic CowMoonity also promotes local businesses and causes.

I love this folksy idea. What a creative way to educate, raise awareness and to show appreciation for the dairy industry, especially family-owned farms, in The Dairyland State. 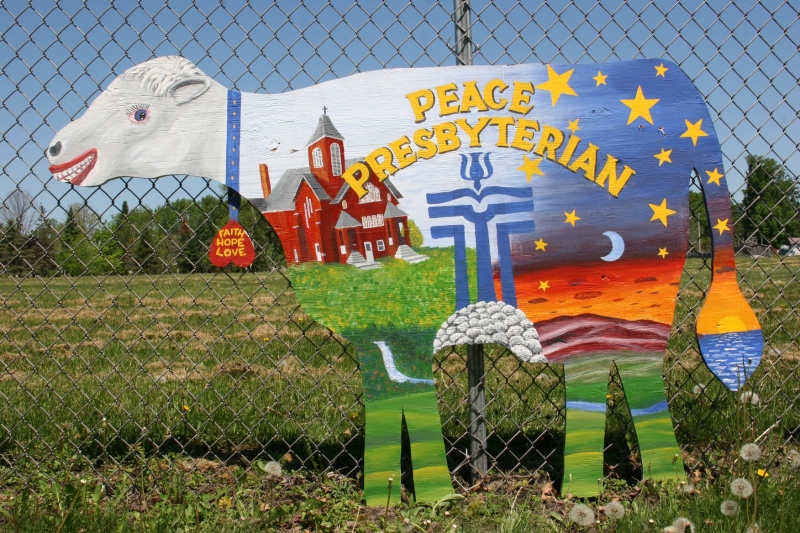 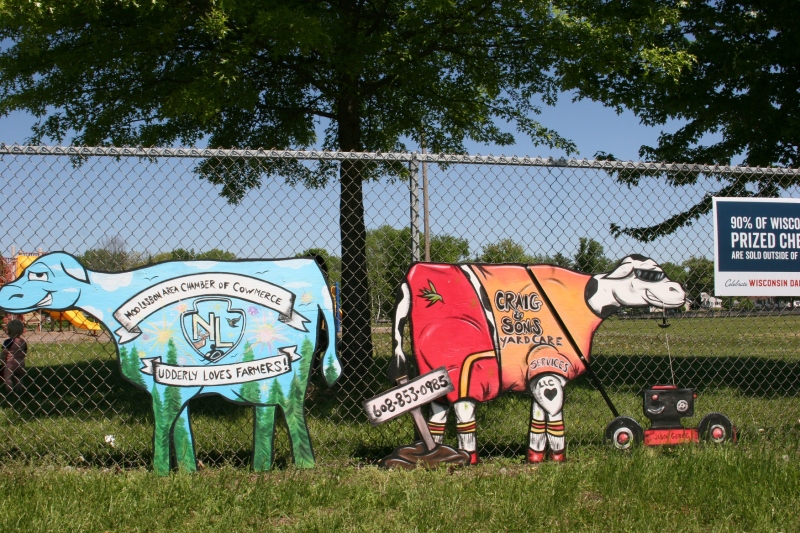 The promotion of the dairy industry doesn’t end, though, when June Dairy Month ends at the end of June. Ten of the cows, selected by a secret panel of judges, are relocated to Veteran’s Memorial Park during the Juneau County Fair, this year from August 12 – 19. Good luck with that, judges. The public then votes for its favorite with the top cow earning a $100 prize.

Because of those cows, I’ll remember the CowMoonity of Mauston. I’d suggest this creative and dairy proud community visibly promote this outdoor educational art endeavor along the interstate. Or perhaps station a Cowtastic cow or three near that busy busy convenience store/gas station just off busy busy Interstate 90/94.

About to enter Wisconsin at La Crosse.

SINCE MY SECOND DAUGHTER moved to Wisconsin seven, or maybe it’s eight, years ago, I’ve grown to love this neighbor to the east of Minnesota.

Crossing the Mississippi River with Minnesota to the right, Wisconsin to the left.

I like Wisconsin’s rural character, its rolling hills and bluffs and open farmland. 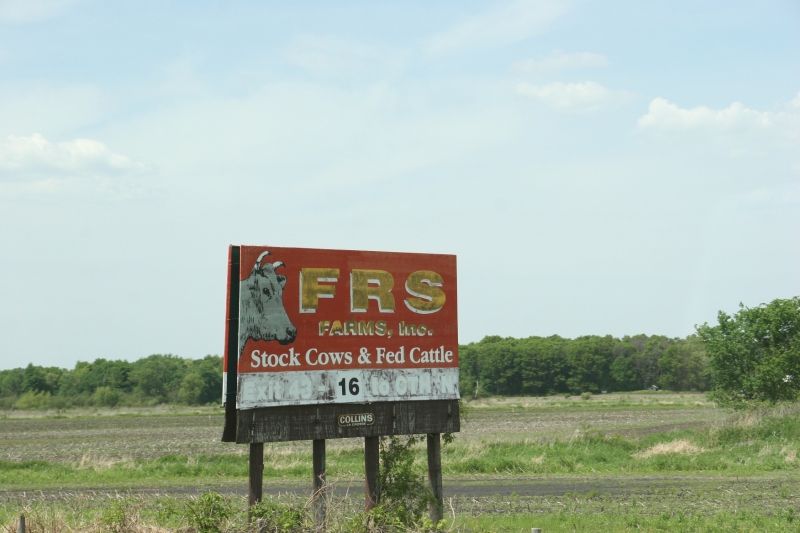 Cow cut-outs line a ballpark fence in Mauston. Can you correctly answer the dairy trivia question? Check the end of this post for the answer. And also check back tomorrow to learn all about this herd of cows.

I like the quaint farm sites, the cows grazing and the proud promotion of dairy. This is, after all, the Dairyland State. 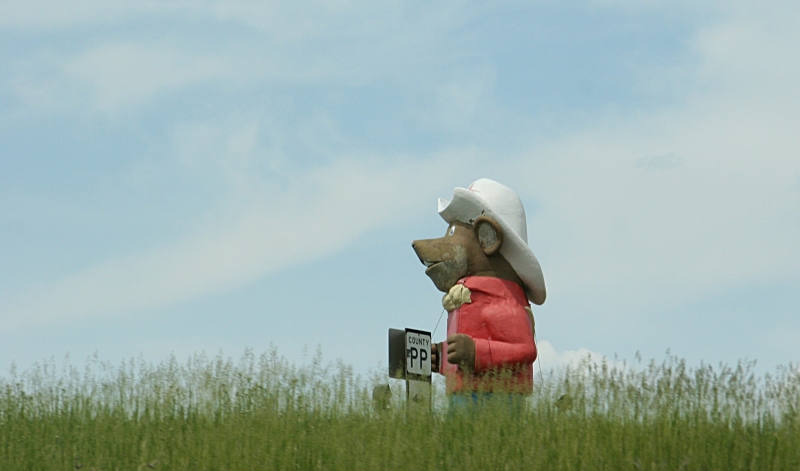 A cheese-promoting mouse statue along the interstate.

I’m amused by the obsession with brat frys and cheese and the Green Bay Packers.

I’ve never seen so many dead deer as in Wisconsin, except in Pennsylvania. Live ones, too. On the return trip to Minnesota from Madison, I counted 17 dead deer along the interstate. I likely missed some. I didn’t count the miscellaneous roadkill. On the trip out, I saw even more dead deer, but didn’t tally those.

I’m not so amused, though, by all the dead deer along roadways.

This message flashed multiple times on signs along the interstate on Memorial Day weekend. During the 538-mile round trip to Madison and back to Faribault, I saw only one law enforcement officer, a policeman just outside Kenyon, MN. I wish one would have been around to catch the driver of the car that passed a semi on the left shoulder of the interstate in Wisconsin.

Nor do I find the drinking culture particularly positive.

But all in all, I find Wisconsin an interesting and beautiful state with small town nuances that often delight me.

The Wisconsin Dells, with its many waterparks, is a popular tourist destination. Here vehicles are backed up along the interstate following a serious car crash. I was thankful we were on the opposite side. Traffic gridlock stretched for many miles.

I am now in the process of discovering a region of Wisconsin previously unvisited. That’s the Madison area. In the past, visits to my daughter took me off the interstate at Tomah and across the state to Oshkosh and then a bit north into the Fox Valley. Now she lives in Madison, a Memorial Day weekend destination. It’s a four-hour drive, an hour less than the previous drive. But it’s still scenic and so quintessential Wisconsin.

FYI: Please check back for more posts from Wisconsin, including one on those cows in Mauston and several posts from Madison. All photos here were taken along Interstates 90 and 94, except the image in Mauston.