Why NDSU research into growing human bones interests me June 28, 2013 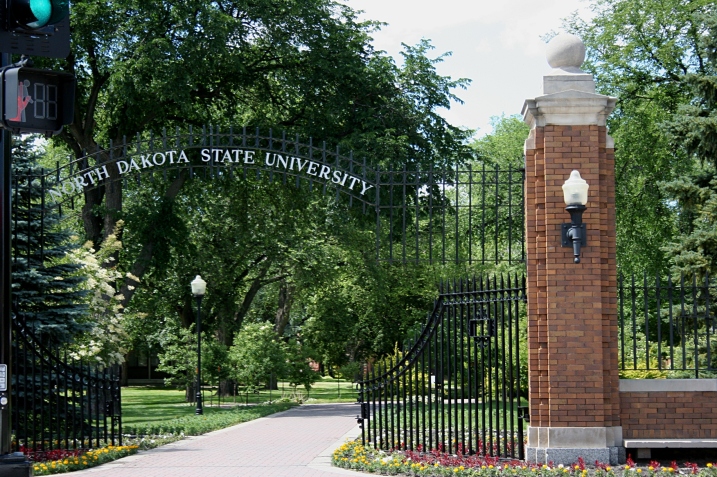 FOR THE MOST PART, I ignore the mass emails sent by whomever, including North Dakota State University, where my son attended his first year of college. He’s transferring to Tufts University in Medford, MA., outside of Boston, this fall.

But this head in a recent NDSU Alumni (I’m not an NDSU alumni) mailing caught my attention:

Up until some seven years ago, I’d never considered arthritic bone, not even thought about arthritis or its debilitating impact on the body and spirit and on mobility.

But then, at age 48 ½, I developed back and hip pain which, initially diagnosed as a pinched sciatic nerve, was eventually correctly diagnosed as arthritis in my right hip. For 2 ½ years I lived with the constant pain until near immobility and an inability to tolerate the pain led me to undergo total right hip replacement five years ago. Given my age, 51, I wanted to put off the surgery as long as possible.

I likely will outlive my hip, which has a life expectancy of 15 – 20 years. That means hip surgery. Again. And that scares the heck out of me because I will be much older, the recovery more challenging.

When I read news about research like that being conducted at NDSU, I am encouraged—hopeful for a better alternative to the current implant system. There have been too many recalls on hip implants. Thus far, mine has not been among them. But pity those people who need to have their defective implants removed and replaced.

To the NDSU researchers who created the system of “3-D mesh scaffold composed of degradable materials compatible to human tissue” in which “cells generate bone and the scaffold deteriorates,” thank you for working on this project.

Do you think you could perfect the process and have it on the market in 10 years?

And for this mom, five weeks proved that.

My 18-year-old son arrived home from North Dakota State University in Fargo on Friday around 11:15 p.m., four hours later than I expected him.

I hadn’t seen Caleb since my husband and I left him standing, rather forlorn looking, in his dorm room on a Saturday morning in mid-August.

Communication since then has been intermittent and mostly one-sided, the one side being my side. Send an email. No response. Text the son. No response. Such lack of communication was typical even when my teen was still living at home. I expected that to change once Caleb started college 285 miles/five hours away. I was wrong.

I also was wrong in thinking that meant he didn’t care, didn’t miss us.

Friday evening when I saw headlights flash into the driveway, I couldn’t slip on my shoes fast enough to race outside and see my boy for the first time in five weeks.

He didn’t quite run from his stash of stuff near the end of the driveway to me. But almost. And when my son, my boy, reached me, he grabbed me in a vise grip hug and didn’t let go. For a long time.

I cannot even begin to tell you how that hug melted my heart, reassured me as a mother that my boy, despite his lack of communication, missed me.

There’s my son, piling food onto his plate at a small family dinner we hosted on Sunday in celebration of Caleb’s homecoming; my eldest daughter’s boyfriend landing a job and moving from LA to Minnesota; and my September 26 birthday. Once he finished his Sunday dinner, my boy was on his way back to Fargo at 1 p.m. Sorry there’s no full view image of my boy as he certainly would have dodged any camera pointed toward his face. He knows me well enough to realize the photo would likely end up on this blog. I saw Caleb for maybe four hours total this weekend. When he wasn’t sleeping in, he was out with friends (including the three with whom he rode home from Fargo) or his dad and I were gone to a wedding and a barn dance. But that’s OK. At least he came home and that makes me a happy, happy mom. He is, by the way, quite well-adjusted, happy and enjoying his new life as a college student at NDSU.

And since I can’t show you pix of the son, here’s my sister, Lanae, and her son-in-law, Andy, dishing up Sunday dinner while my husband, Randy, prepares to slice chicken breasts in half. Randy grilled chicken and fresh baby potatoes.

My sister brought the Caesar salad and tossed in a few flowers for color. (She’s a florist.) And, yes, the flowers are edible, although I didn’t taste them.

Three left-over pieces of the delicious peanut butter and chocolate cheesecake baked by my oldest daughter, Amber, and her boyfriend, Marc. Cheesecake is my absolute favorite dessert.

Beautiful birthday flowers from my sister, the floral designer at Waseca Floral.

Adjusting to college (mom & son) & reacting to a bomb threat on the NDSU campus September 15, 2012

EDITOR’S NOTE (that would be me): I was writing this post on Friday when my son called at 10:04 a.m. to tell me the campus of North Dakota State University had been evacuated due to a bomb threat. I was into the fifth paragraph of this post at the time. It is now 3:01 p.m. on Friday and I will attempt to pick up where I left off, although the content, I expect, will differ from what I’d originally intended.

My 18-year-old son, shortly before my husband and I left him in his dorm room on the campus of North Dakota State University four weeks ago. On Friday morning the entire campus was evacuated due to a bomb threat.

TWENTY-EIGHT DAYS/four weeks/one month have passed since my husband and I left our youngest at North Dakota State University, one state/285 miles/five hours away in Fargo.

Since then family and friends have asked how I’m doing. They never ask Randy, I suppose because dads typically don’t admit they miss their children so who would think of asking.

I was poised to tell you that I’m mostly fine, but then, snap, just like that I miss my boy so much I want to cry. I long for the unexpected moments when he would walk into my office and ask, “Mom, can I have a hug?” And then I would wrap my arms around him and savor the tender moment, knowing he still needed me.

I’m not so certain about that need part anymore.

But then the focus of this post changed, snap, just like that, when I thought about Jared, a 19-year-old who lost his life Tuesday afternoon in a farm accident near Janesville. He was trapped inside a grain bin and died before rescuers could release him from the suffocating corn.

I knew Jared because he and his twin brother, Jordan, once attended the same Christian day school as my children and the same church I attend. I don’t know when the family moved away, but that matters not.

I can still picture those two (then) little boys and their mother, Julie, worshiping at Trinity. And now Julie has lost Jared and Jordan has lost his twin brother and a family, and friends, grieve.

And I wonder how a mother can bear such grief.

And I wonder how I can be so selfish and think about myself and how I’m feeling.

Honestly, it’s not like I’m not going to see my 18-year-old. He’s tentatively planning a trip back to Faribault next weekend. I’m happy and elated and so excited.

Then I pause and consider my sister-in-law and brother-in-law and how their 19-year-old son died the summer before he was to start his freshman year of college. And I wonder how a mother and father, even 11 years later, can bear the grief of losing their boy, my nephew, too soon to cancer.

You never know what life will bring. I never expected yesterday morning to answer my cell phone and learn from my son that his college campus—in Fargo, North Dakota, of all places—had been evacuated due to a bomb threat. I felt helpless and desperate for information and wishing I could snatch him away into the safety of my arms and protect him from the evil that exists in this world.

Perhaps this is the dilemma of mothers everywhere, always and forever. We strive to push our children toward independence. And then, when they leave, we long to have them back, safe in our arms, close in the circle of our love.

File photo of the main entrance to North Dakota State University in Fargo.

AND NOW, YOU ASK, how is my college freshman son doing?

Initial responses to that question were limited to two words: “Fine, Mom.” And what, exactly, did that mean? I worried because my son is more reserved, most definitely not a social butterfly.

My husband and eldest urged me to give him time and stop worrying. They were right.

He’s now joined a board game club and a computer club (and will be competing soon in some competition in Illinois and he’s taking his resume because big companies like Twitter and Facebook will be there and it’s a great opportunity to network). He’s met other unicyclers and is trying to start a unicycle club. On Tuesday he starts working and volunteering for Chicago-based Bolder Thinking at the NDSU Technology Incubator as part of his Entrepreneurial Scholarship. He’s formed a limited liability company and will be doing some consulting work (sorry, can’t give you details on that).

And in between all that, he’s carrying 17 college credits.

Yes, the college freshman son is, by all reports (as of Friday), doing well.

His only real complaint thus far: living in the dorm. The reason: the noise. 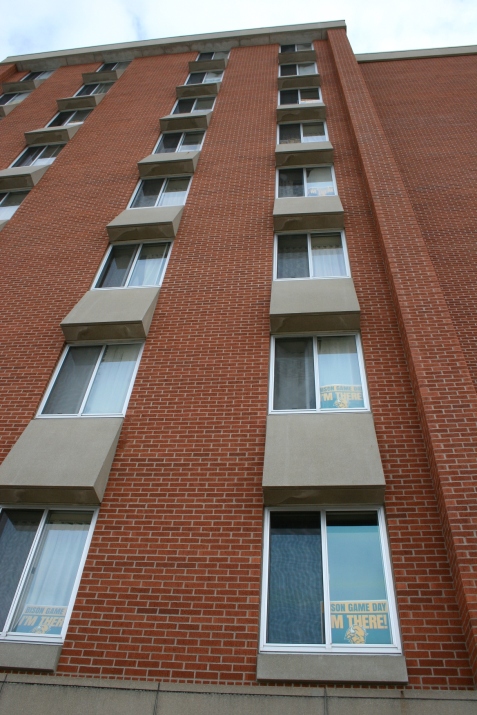 File photo of a dorm at North Dakota State University.

ABOUT THAT BOMB THREAT: A reporter for the Associated Press, who follows my blog (who knew?), contacted me Friday morning to ask about interviewing my son regarding the evacuation at NDSU. You can read the AP story by clicking here.

Thank you to everyone who offered their support to me via emails, comments and phone calls as this event unfolded Friday at NDSU. I am humbled by your concern and support. Such care reinforces my belief that the goodness in this world far outshines that which is bad.