SPRING UNOFFICIALLY ARRIVED in Faribault this past weekend. You’d never guess that from viewing the snow cover, freshened by two inches of new snow overnight Sunday. But The Little DQ opened on February 27, signaling the shift toward spring. At least for Randy and me.

Every year about this time, the walk-up/drive-up Dairy Queen along Lyndale Avenue reopens after a three-month seasonal closure. And we find ourselves there picking up bargain Peanut Buster Parfaits. Seldom do we treat ourselves to DQ. But this opening special has become a tradition in recent years.

So Monday evening, when I’m certain Randy would rather have settled onto the sofa than leave the cozy warm house after a long day of work, we headed across town to the DQ. Past the fire station and the courthouse, turning onto Fourth Street. The suspension in our 2003 Chevy Impala, closing on 270,000 miles, creaked with each switch in direction. Past the pizza place and our church and the recently-closed Family Video and the abandoned Farmers Seed and Nursery building. Across the train tracks and, shortly thereafter, a left turn onto the frontage road. Past Kwik Trip and then onto the pothole pocked street by the DQ.

I noted the electronic sign welcoming back “your smiling faces.” And I noted, too, the posted temp of 21 degrees.

We arrived at a good time, on a cold evening past the dinner hour, to find only one vehicle ahead of us. A red pick-up truck. I counted out dollar bills and change, $4.28, to cover the $1.99 plus tax parfaits. Once cash was exchanged for treats, I clutched the two plastic encased parfaits and Randy aimed the Chevy back home.

We passed homes still aglow in holiday lights while a country tune played on KCHK 95.5 FM out of New Prague. I’m not a country music fan and Randy listens only occasionally for the weird stories. But something about the gentleness of the song and heart-breaking lyrics appealed to me. I got the music, he got you… He got the sunshine, I got the rain…

As Ronnie Milsap crooned, I took in our surroundings. Colored lights framing a solo second-story window in an aged wood-frame house. And, a block away, an American flag hung vertically as a window covering. Along Division Street, I spotted a snow fort in a front yard, mentally marking that I need to revisit this in daylight.

At a four-way stop, I saw a screen in the maroon vehicle ahead playing some show to entertain the kids. And I wished the family would turn off the device for a moment or ten and take in their surroundings. Neon blue lights outlining a front porch. Slant of light upon snow. Snow mounding along roadways.

In my hands, the Peanut Buster Parfaits transferred cold into my fingers. And shortly thereafter, when I spooned into the ice cream and fudge traced with peanuts while snuggled under a fleece throw in the recliner, I grew colder. And, for the longest time, I couldn’t get warm on this first day of March in Minnesota.

JUST AS WINTER BEGINS to feel too long, a sure sign of spring springs forth in my southeastern Minnesota community. The Little DQ of Faribault opens today. And the masses are rejoicing, if Facebook is an indication of how much locals need this break from winter.

Every year for the past several, Randy and I, like so many others here in the land of cold and snow, have embraced this re-opening of the walk-up/drive-up Dairy Queen at 309 Lyndale Avenue North. The cozy ice cream shop closed for the season on November 1, while the larger Dairy Queen Brazier, just down Minnesota State Highway 60 to the west, stays open year-round. 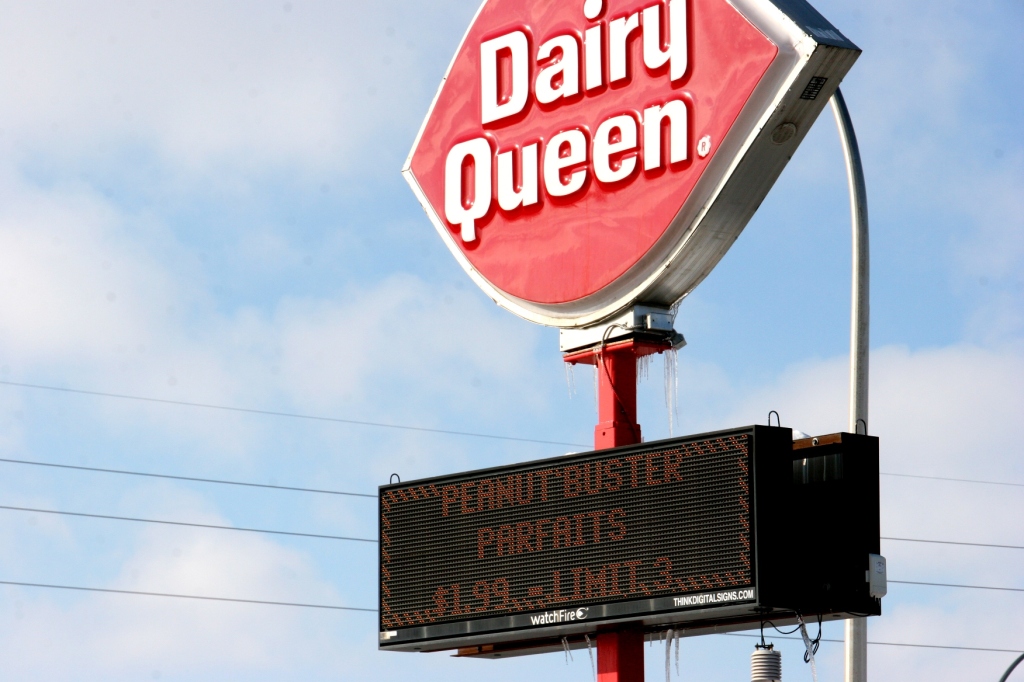 Around this time each February, the Little DQ opens with a Peanut Buster Parfait special, this year priced at $1.99 (same as last), limit of three, from February 28 to March 1. The deal is good at both locations. But you can bet the lines will be longer at the smaller DQ. This place holds nostalgic charm. That coupled with the traditional spring opening special draw winter-weary ice cream lovers. 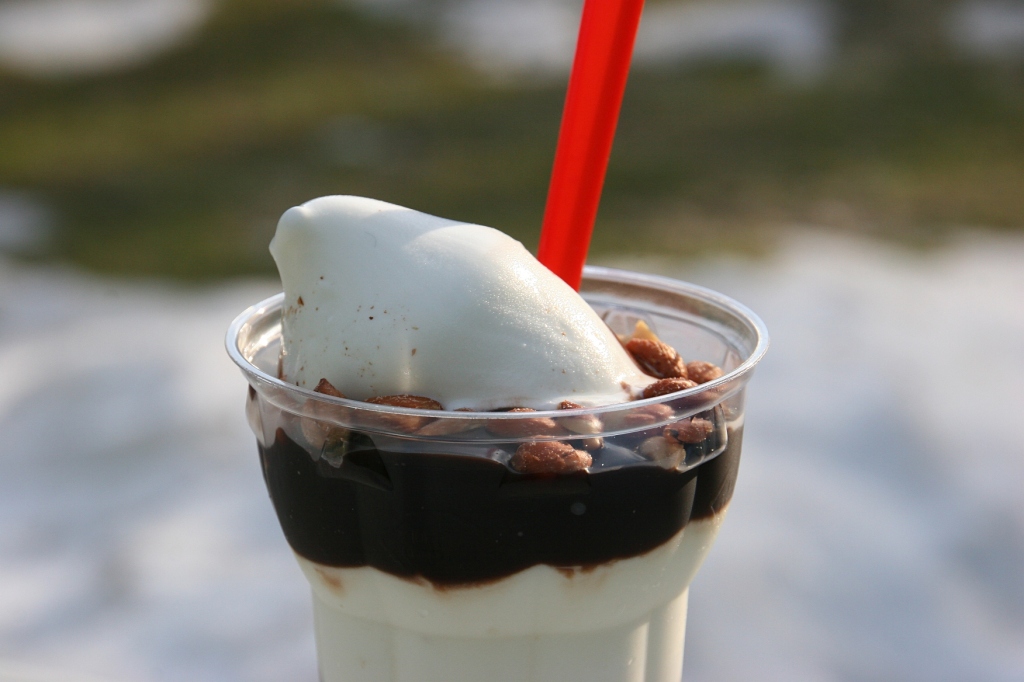 Never mind the calories—710. It’s best not to think about those as you dig into the hot fudge, the peanuts, the sweet sweet ice cream.

It’s seldom Randy and I indulge in Dairy Queen. But this Peanut Buster Parfait special, well, we can’t let it pass. We sit in our van with the heater blasting warmth while we enjoy our first unofficial taste of spring.

The sweet treat that marks the unofficial arrival of spring in my Minnesota community March 6, 2018

TWICE A YEAR, Randy and I treat ourselves to Peanut Buster Parfaits at the local Dairy Queen. In the fall when the smaller of the two DQs in Faribault closes for the winter and then again when it reopens for the season.

On the last Sunday of February, we headed to the ice cream chain for our $1.99 parfaits. The bargain price of more than half off the $4.59 list price was irresistible. I simply ignore the 710 calories.

As we pulled into the DQ parking lot, I suggested we sit outside at the concrete picnic tables, just to say we’d eaten our parfaits outside in Minnesota in February. Randy wasn’t falling for my suggestion. “There’s snow on the tables,” he said. Not everywhere, I observed to myself. But he was right. Consuming something cold while sitting on cold concrete, even if to prove a point, wasn’t the brightest idea. 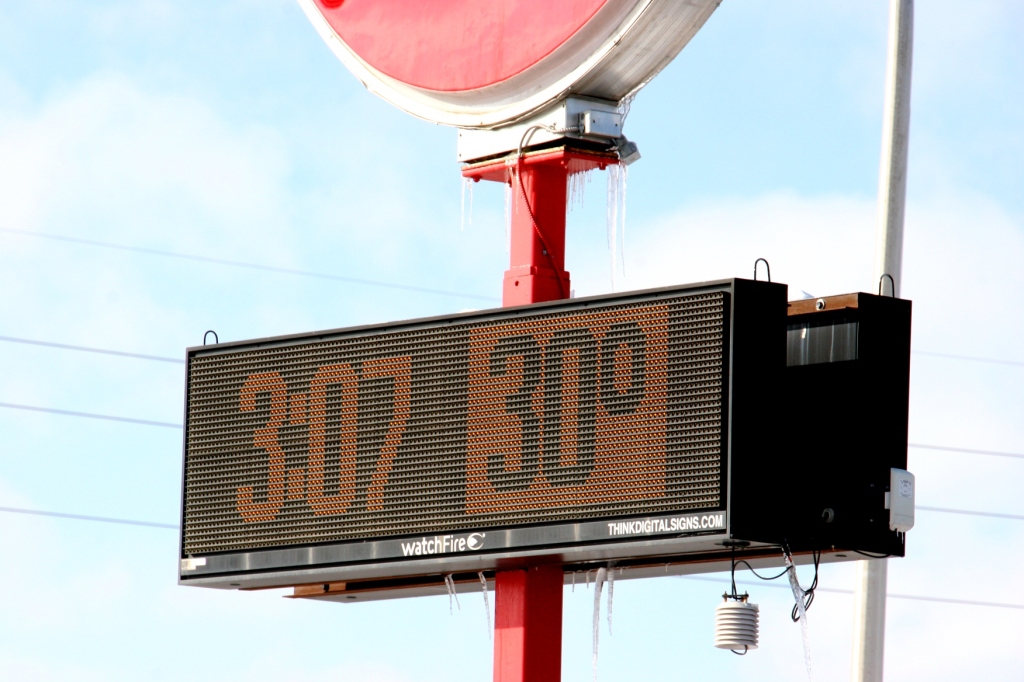 The DQ sign showed a temperature of 30 degrees as we carried our treats outside and to the van.

I suggested we head to a park. Not to sit outdoors. But to pretend we could if only the temp was 20 degrees warmer. At a park near our home, we sat in the van and scooped sweet ice cream, salty peanuts and decadent chocolate into our mouths, savoring this first taste of spring in Faribault.

NOTE: To those of you in Minnesota, the Dakotas and Iowa, I know today seems nothing like spring.  I wrote this post and put it in draft prior to Monday’s major winter storm. Just pretend it’s spring. Or head to the DQ.

SPRING HAS UNOFFICIALLY arrived in Faribault. The walk-up/drive-through Dairy Queen along Lyndale Avenue is open.

Sunday afternoon I clipped a $1.99 Peanut Buster Parfait coupon from the Faribault Daily News to celebrate. DQ is a rare treat for Randy and me, afforded only when money-saving coupons are available. Opening weekend at the DQ always brings deals. Perfect.

I envisioned sitting on the DQ patio under sunny blue skies in predicted 60-degree temps. Perfect.

But forecasts do not always equal reality. I suggested Plan B—going to a park. In hindsight, I wonder what I was thinking. After an attempt to eat our parfaits on a park bench, I caved and headed back to the warmth of the van. There we sat, savoring ice cream, peanuts and fudge while grey skies hung and the temp locked at 48 degrees in a still slightly snowy landscape.

Monday brought much warmer temps, like those promised on Sunday, along with intense wind followed by storms. Remaining snow melted.  And two tornadoes touched down, causing damage near Zimmerman and Clarks Grove. These are the earliest tornadoes of the season ever in Minnesota, breaking a record set in 1968. Here in Faribault, we experienced heavy rain and even small hail for a brief time Monday evening. A light dusting of snow fell overnight. The Dairy Queen may be hinting at spring. But winter seems determined to cling to March in Minnesota.