River Bend in March, before the latest winter storm March 16, 2021

AS I WRITE MONDAY AFTERNOON, snow continues to fall. Steady, for hours and hours. Layering the landscape that, only the day prior, was devoid of snow.

After an especially lovely Saturday of sunshine and 50 some degrees, this return of winter seems like a mean trick of Mother Nature. I rather enjoyed pre-spring. But as a life-long Minnesotan, I expected snow and cold to return. Yet, maybe not with such force, as if the weather has something to prove.

That all said, let’s forget the winter storm and backtrack to Sunday afternoon, when Randy and I hiked the trails at River Bend Nature Center in Faribault. It’s one of our favorite places to escape into nature.

I always carry my camera. And here’s what I found: Natural beauty even in a drab landscape transitioning between seasons.

Signs of spring in maple sap collection bags and buckets.

And sap dripping slowly into the containers.

Signs of winter in ice edging the Turtle Pond.

A lone child’s snow boot, which left me wondering how that got lost without anyone noticing.

And the photo I didn’t take of young people clustered along a limestone ledge with their remote control vehicles climbing the layered rock. Limestone was once quarried from this area.

And then the bark-less fallen tree Randy pointed to with shades of brown sweeping like waves lapping at the lakeshore. Artistically beautiful. Poetic.

Just like words imprinted upon plaques adhered to memorial benches honoring those who loved this place, this River Bend.

Moss carpeting the ground in a line across a ridge of land in the woods. The only green in a landscape of brown tones.

Dried grasses and dried weeds on the prairie. The muted remnants of autumn.

Tracks muddied into the earth.

and fungi and all those things you notice if you only take the time to pause. To appreciate the natural world. To step into the woods. To walk the asphalt trails heaved by frost and tree roots. Or to follow the dirt trails that connect soles to ground. Soul to nature.

MARCH BRINGS TO MINNESOTA the teasing of spring.

Recent sun-filled days of unseasonable temps soaring into the sixties proved a respite. And this winter, especially, I needed a break from cold and snow, from the sheltering in.

Tuesday afternoon I threw open the windows. Fresh air breezed through the house. I kept the kitchen screen door open long after dinner, the scent of sautéing onions carried outdoors.

Outside, two fleece throws flapped on the clothesline. Dancing in the wind, occasionally twisting.

As the wind blew and the sun shone, the snow pack continued to melt. Only remnants of snow remain in shadowed spots next to the fence, along the north side of the house, next to the driveway.

In my front yard, tender crocus shoots poke through the mulch leaves of autumn. Too early. As always. But the crocus react to sunshine and temps, not to the calendar.

March in Minnesota tempts us with spring. Melting snow and puddles. And, as I write this Wednesday morning, grey skies drizzle rain. Snow is back in the forecast. As are possible thunderstorms. Even tornadoes. A mixed bag of March weather. Typical Minnesota.

Now as I update this Wednesday evening, southern Minnesota has experienced its first severe weather scare of the season. Tornado warnings were issued late this afternoon in multiple counties, including my county of Rice. When warning sirens blew in Faribault, I headed to the basement while Randy kept me updated on weather in Northfield (where he works) and our eldest texted from her south metro basement.

While clouds appeared sometimes overpowering and ominous, no tornadoes developed. To the north, in the central and northern parts of Minnesota, snow fell. Up to six inches in some locales. It’s almost as if two seasons collided with spring bumping against winter.

FYI: I invite you to read another blogger’s take on March in Minnesota by clicking here. Kathleen Mickelson is an incredibly gifted writer with a strong poetic voice. Yes, she’s a published poet. She loves the craft of writing and is a pretty darned good photographer, too. And an all-around lovely individual. 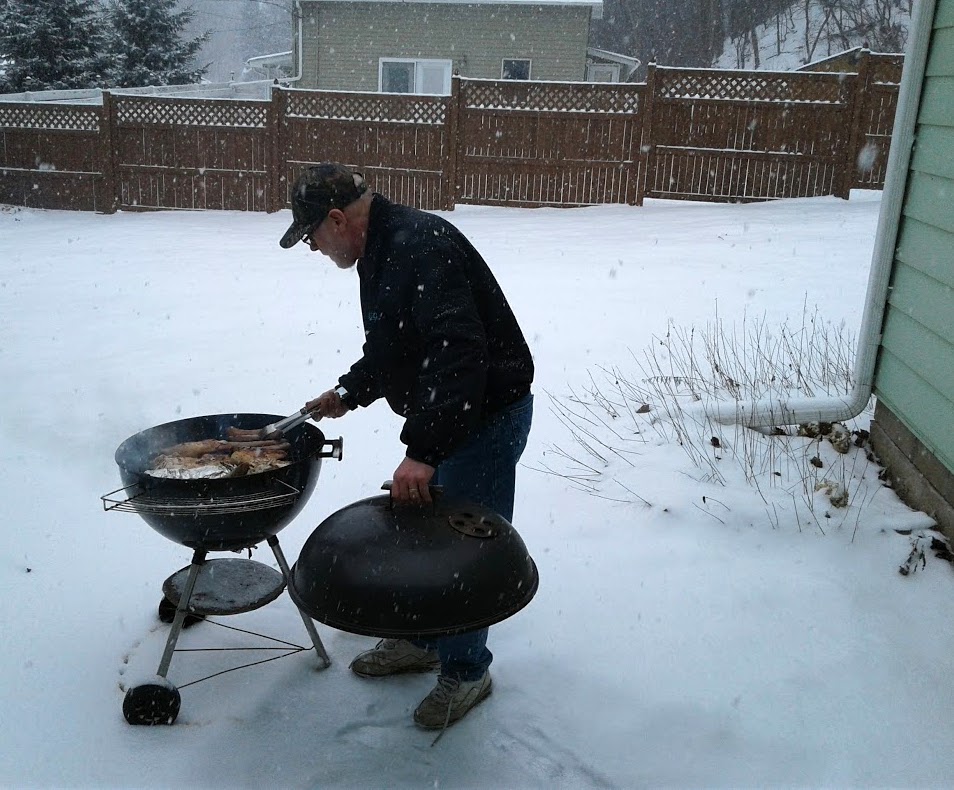 …shall stop my husband from grilling in our Faribault backyard.

On the menu: Chicken breasts, baby red potatoes and asparagus.

TELL ME: Would you grill in these conditions or worse? Let’s hear. 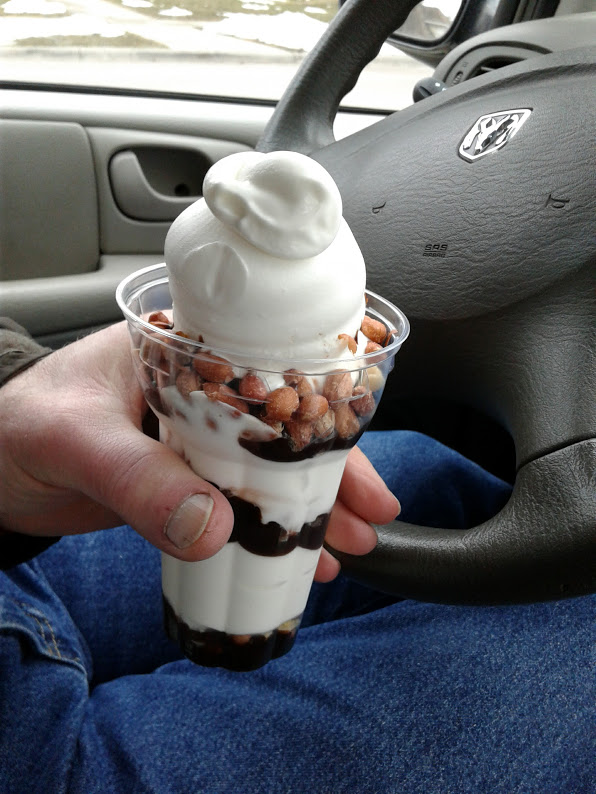 SPRING HAS UNOFFICIALLY arrived in Faribault. The walk-up/drive-through Dairy Queen along Lyndale Avenue is open.

Sunday afternoon I clipped a $1.99 Peanut Buster Parfait coupon from the Faribault Daily News to celebrate. DQ is a rare treat for Randy and me, afforded only when money-saving coupons are available. Opening weekend at the DQ always brings deals. Perfect.

I envisioned sitting on the DQ patio under sunny blue skies in predicted 60-degree temps. Perfect.

But forecasts do not always equal reality. I suggested Plan B—going to a park. In hindsight, I wonder what I was thinking. After an attempt to eat our parfaits on a park bench, I caved and headed back to the warmth of the van. There we sat, savoring ice cream, peanuts and fudge while grey skies hung and the temp locked at 48 degrees in a still slightly snowy landscape.

Monday brought much warmer temps, like those promised on Sunday, along with intense wind followed by storms. Remaining snow melted.  And two tornadoes touched down, causing damage near Zimmerman and Clarks Grove. These are the earliest tornadoes of the season ever in Minnesota, breaking a record set in 1968. Here in Faribault, we experienced heavy rain and even small hail for a brief time Monday evening. A light dusting of snow fell overnight. The Dairy Queen may be hinting at spring. But winter seems determined to cling to March in Minnesota. 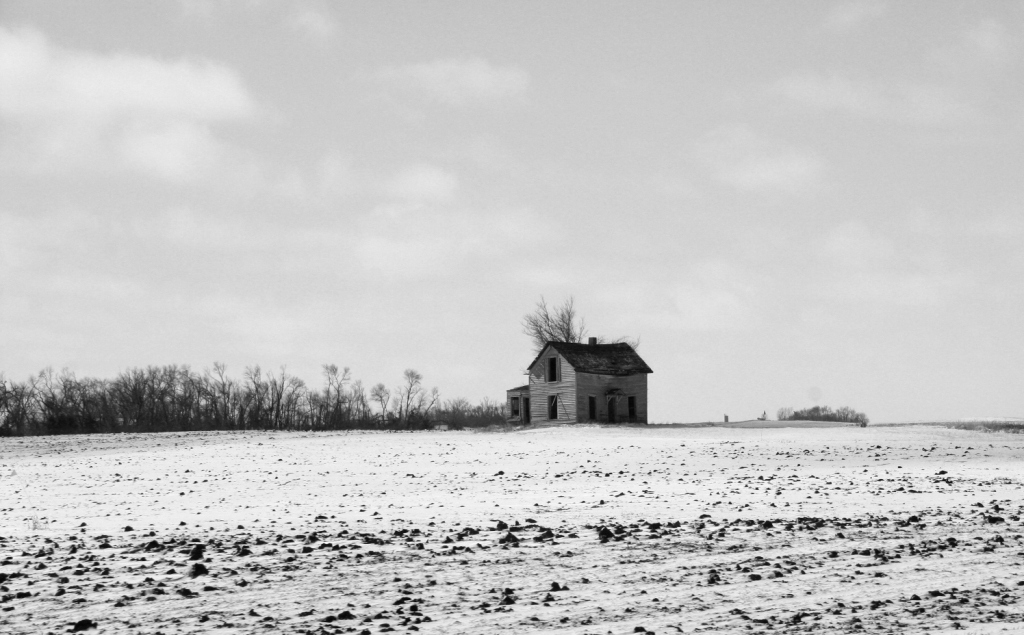 An abandoned farmhouse along Minnesota State Highway 19 east of Vesta on the southwestern Minnesota prairie.

WINTER IN MINNESOTA this time of year and in November often seems stripped of color, a drab world of black-and-white mimicking the melancholy mood of those who wish only for spring.

So it takes some effort to appreciate this month of March which can’t quite decide whether to pursue spring or linger awhile yet in winter.

One day she’s dark and brooding, the next bright and cheery. Understanding her mood swings can be a challenge.

Sometimes you just have to accept who she is and realize that even in her colorless world, a certain sense of beauty prevails. 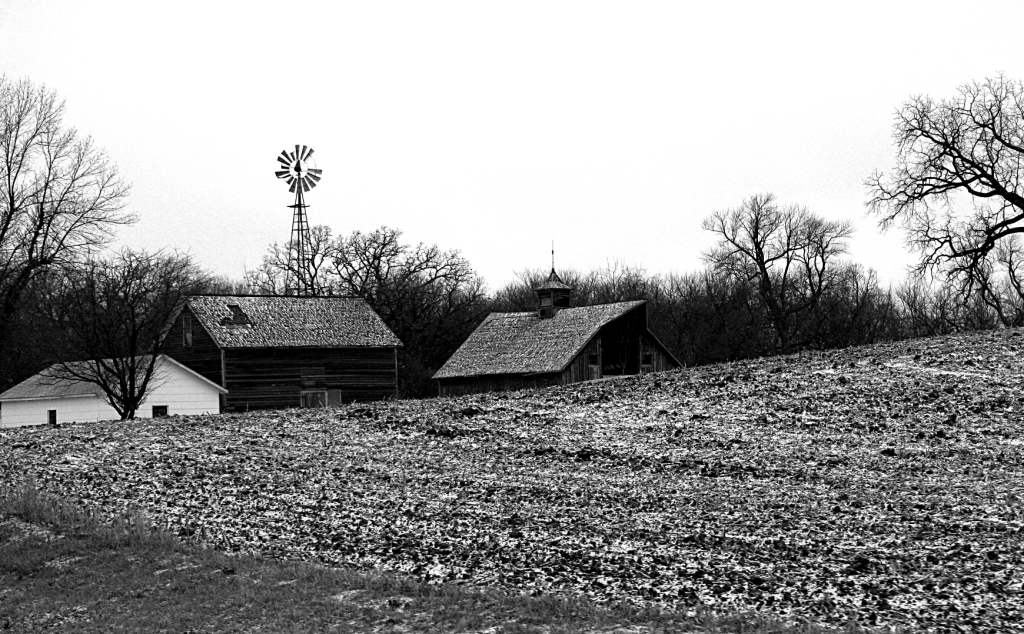 An aging windmill and a cluster of old buildings define this picturesque farm site along Minnesota State Highway 60 just west of Waterville in southeastern Minnesota. 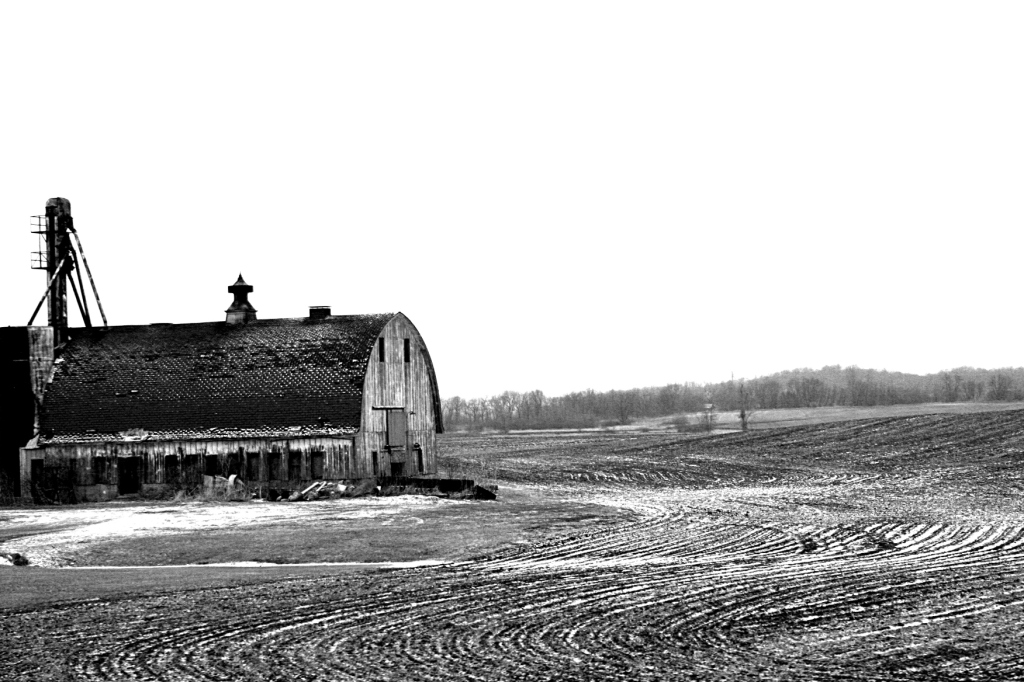 The sweeping curves in the field drew my eye to photograph this scene west of Waterville along State Highway 60. 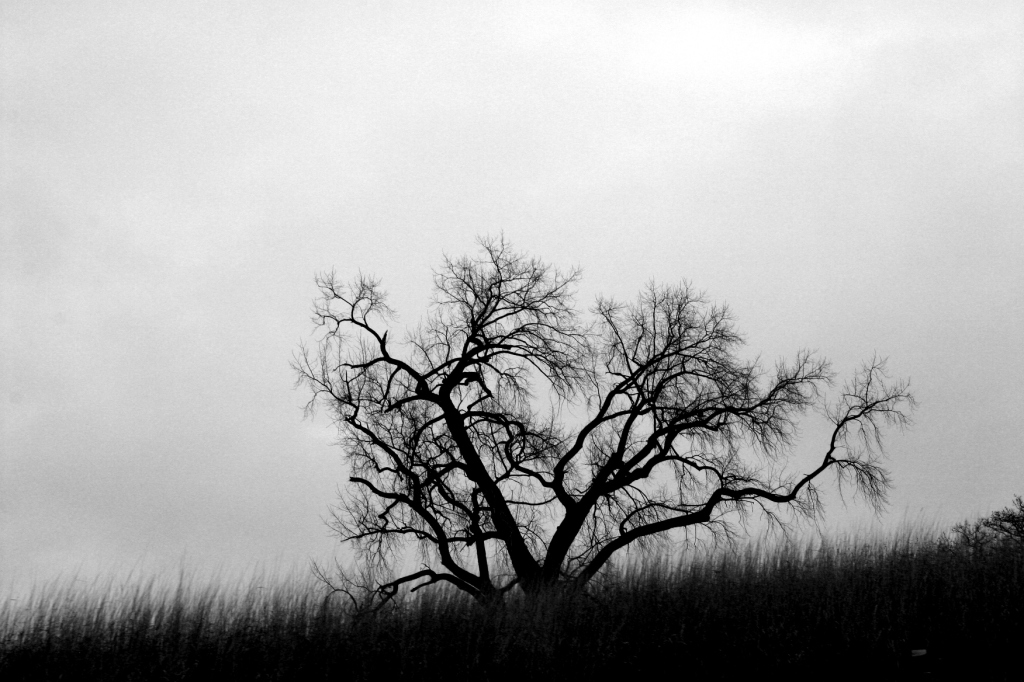 A lone tree along Minnesota State Highway 60 between Faribault and Waterville on a brooding March morning. 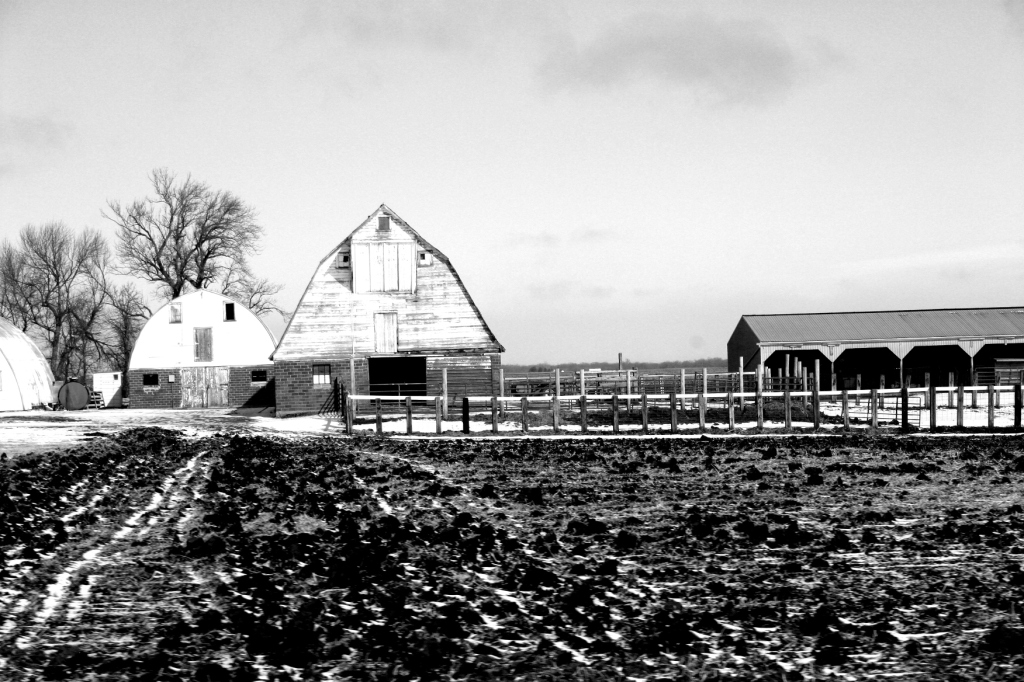 Farm sites mark the landscape along a back county road between New Ulm and Morgan.

All of these images were taken last Saturday morning from a moving vehicle while traveling through southern Minnesota. Each has been edited to create a more artsy, earthy feel.