The Merlin Players deliver an evening of laughter in Faribault via “Barefoot in the Park” February 24, 2018 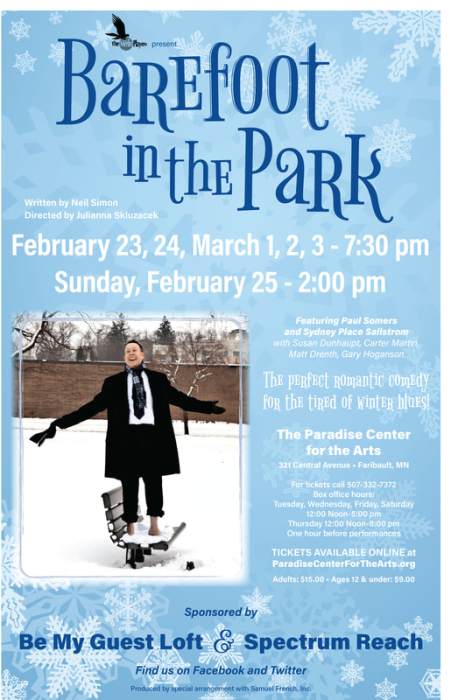 MORE THAN EVER, I need laughter. I need to sequester myself in a place without media, without any hint of what’s happening outside weather-wise or world-wise. I need to laugh in bursts of untethered delight.

That happened Friday evening inside the darkened historic theatre at the Paradise Center for the Arts, 321 Central Avenue, in downtown Faribault.

There, The Merlin Players opened “Barefoot in the Park,” a romantic comedy by Neil Simon set in a New York City brownstone in February 1963. There I found the delight I craved, I needed, I longed for in recent days. I laughed. Free. Full. Joyous.

This six-person cast presented a stellar performance of this story about newlyweds settling into their apartment and into married life. A drop-in mother-in-law, a quirky and friendly neighbor, a telephone repairman and a delivery man round out the cast.

What most impressed me, besides the acting, was observing just how much these performers love working together. In one scene, mother-in-law Ethel Banks (played by Susan Dunhaupt) and neighbor Victor Velasco (played by Carter Martin) started laughing. Not as part of the script, but at lines in the play and the audience reaction. It was one of those moments that drew us all in. Unscripted. Pure and full laughter rolling through the theatre. Until the pair could pull themselves together enough to continue.

After the show, at an opening night reception, Martin was overheard saying he didn’t expect they would have a “Carol Burnett moment.” He was referencing the superstar comedian who sometimes also laughed so hard she paused in performing.

Faribault is fortunate to have a semi-professional theater company based in our community and one which draws such talented performers—like the leads in this play, professional actor Paul Somers and Sydney Place Sallstrom. Matt Drenth (the phone repairman), in his buffalo plaid shirt, also brought plenty of humor to the performance as did Gary Hoganson with his minor delivery man role.

All in all, “Barefoot in the Park” gave me exactly what I needed on a February evening in Minnesota. Laughter. And a few hours secluded in the darkness of a theater, away from the real world, real life.