“WHY DO YOU have that Band-Aid on your hand?” I ask.

“I was frying potatoes and grease splattered and melted a hole,” he replies.

Already I am laughing so hard that his answer is barely audible above my squawking. But I find this extremely hilarious. My father-in-law, Tom, has placed a small round Band-Aid on his artificial hand.

At first I think he is playing a joke. He has a quirky sense of humor. But he is serious, dead serious. Grease really did melt a hole in his prosthesis and he needs the Band-Aid to keep out water and gunk. 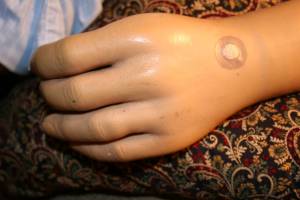 Soon laughter gives way to seriousness as I ask how long it’s been since the farm accident that eventually claimed his hand and forearm up to inches below his elbow.

Later, after Tom has left our house following an overnight visit, I ask Randy about that afternoon four decades ago. He had driven an empty wagon to the corn field shortly before the accident.

“He (Dad) said he would make one more round,” Randy remembers of the fateful day when his dad was chopping corn on the family farm near Buckman, Minnesota. “He said, ‘Why don’t you just stay here?’ and I said, ‘I’ll ride along.’”

The then 12-year-old’s decision to accompany his dad likely saves his father’s life. They are nearing the far end of the field when the corn chopper plugs with corn. Tom hops off the tractor to hand-feed corn into the chopper when the unimaginable happens. Along with the corn, Tom’s hand is pulled into the spring-loaded rollers. The blades chop off his fingers. The rollers trap his arm.

As his father screams for help, Randy disengages the power take-off. Soon he is running across swampland and along a cow pasture to a neighboring farm. Randy and his neighbor, Nick, jump into Nick’s car and race back through the pasture toward the accident scene. Nick parks the car. They cut across swampland to the field.

While Nick struggles to free Tom from the rollers’ grip, his son and daughter-in-law, Dick and Kathy, are also racing to the field. They have been summoned there from nearby Buckman. Dick somehow navigates through another cow pasture and along a trail to reach the far end of the field. Later he will wonder how he managed to traverse the land.

“If anyone could do it, Dick could,” Randy says. “That was his (Dad’s) ambulance ride.”

But first, the trio stops at the Helbling family farm for ice and a cloth and to gas up the car before barreling northwest to St. Gabriel’s Hospital in Little Falls 20 miles away.

Just as Dick and Kathy arrive at the hospital with Tom, another farm accident victim arrives. Meinrad, a high school student, has caught his arm in a corn picker. He lives only four miles west of my father-in-law.

Together, the two are placed inside a single ambulance that rushes them toward the St. Cloud Hospital. Later, they will share a room.

All of this I learn from my husband who remembers with vivid clarity the details of the October 1967 farm accident that cost his father his left hand and much of an arm.

For years, Tom attached a hook, secured in place by a shoulder harness, onto his shortened limb. Today he wears the prosthetic arm with several movable fingers and that small round Band-Aid that has made me laugh.

Farmers, please be careful and safe this harvest season so that we can always hear your laughter.