“DO YOU KNOW WHERE you’re going?” I ask my husband as he turns the car down a gravel road.

“Yes,” he says and I can only hope Randy is not saying that just to appease my uneasiness. I like to know where I am, meaning I would not make a good explorer, vagabond or gypsy.

We are driving along Farmer Trail northwest of Nerstrand in Rice County. The gravel road twists and turns through the woods. And then, as we round a bend, three neon orange traffic cones mark our driving lane where a tree has fallen. Someone has been here already, sawing the tree into movable chunks. We skirt the mess and I think how fortunate that we are only on a Sunday afternoon cruise and not zipping along Farmer Trail.

A fallen tree on Farmer Trail.

Even though the leaves have little color and the skies are heavy with oppressive gray clouds on this early October day, the rural setting is beautiful, and undiscovered. This is the second year we have traveled Rice County back roads in the autumn, following routes that few others seek out for fall colors.

A corn field ripens against a back drop of trees.

Later, as we angle toward Faribault near Cannon City, I spot an autumn-themed display of pumpkins, corn shocks, a scarecrow and flowers. It’s worthy of a photo. As I compose an image, I hear the bark of a dog, a bark that promptly scares me back to the car. 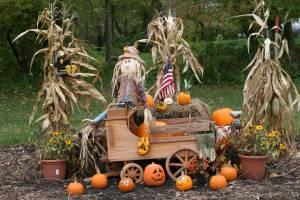 An autumn scene near Cannon City.

As we pull into town, we stop at Trump’s Apple Orchard. And while Randy is helping a customer who is having car trouble, I scan the tables of apples, admire the pumpkins and gourds, and then tell co-owner Todd Trump that I would like SweeTango® apples. I think I’ve got him, but the joke is on me. He steps away and returns with a SweeTango®, the newest apple developed by the University of Minnesota. He hands me a slice.

His orchard should have the variety, which is a cross between Honeycrisp and Zestar, available for sale next year, Todd says.

He likes the taste and the crunchiness (something customers prefer in an apple), Todd tells me. I’m no apple connoisseur, so I can’t distinguish the uniqueness of SweeTango®. But I agree with Todd. This is one crisp apple. 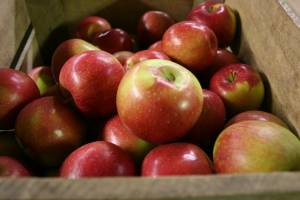 Trump's sells apple and other homemade pies from Trinity Lutheran Church in Faribault.

A stone’s throw down the road, Randy and I stop at Twiefhoff Gardens for fresh potatoes. While Randy gathers spuds, I aim my camera at colorful squash, pumpkins, gourds and Indian corn. 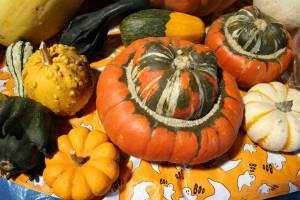 The bright oranges and yellows speak of autumn, of harvest from the earth, of meandering country roads, of trails taken by the adventuresome, and the not-so-adventuresome.