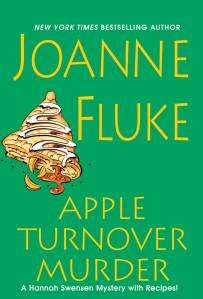 This time Hannah, the 30-something owner of The Cookie Jar, a coffee shop and bakery in fictional Lake Eden, Minnesota, discovers a body at a charity fund-raising event. So as not to spoil the plot, I’m not revealing the victim. But if you read Fluke’s last book, Plum Pudding Murder, that’s a clue.

As in her previous books, the title ties to the crime with a half-eaten apple turnover found near the victim. Food is an important ingredient in Fluke’s mysteries as her characters are always eating (mostly cookies) and drinking coffee. In Apple Turnover, you’ll find 21 recipes, including numerous cookie recipes, sprinkled between chapters.

Fluke’s recipes possess a distinctly Midwestern flavor that appeals to me. She grew up near Swanville in central Minnesota and now lives in California. These foods are uncomplicated, comforting and sometimes, oh, so familiar. Take “Too Easy Hotdish,” which, in our northern lingo, translates to “Tator Tot Hotdish.”

I am especially delighted with Fluke’s inclusion of “Wacky Cake,” my favorite homemade chocolate cake and the cake which my mom baked every year for my childhood birthdays.

As a Minnesotan, I appreciate this New York Times bestselling author’s intimate knowledge of her home state. You’ll read about the Kensington Runestone, donkey baseball, mosquitoes and “Minnesota Nice” in Apple Turnover Murder.

But most of all, Fluke understands the conservative nature of most rural Minnesotans and the importance of family and community. That’s reflected in her characters’ relationships. And although her stories include romance—Hannah is torn between two men—you won’t find any steamy love scenes.

Ditto goes for the murder cases. Fluke reveals murders, with few gory details, and then focuses on crime-solving, led by the always forge-ahead, sleuthing Hannah.

In Apple Turnover, Fluke presents two additional mini-mysteries, one involving an out-of-state job opportunity for Hannah’s deputy sheriff brother-in-law and the other involving Norman, one of Hannah’s love interests. The dangling ending of Fluke’s newest mystery leaves readers like me awaiting the next Hannah Swensen book, Devil’s Food Cake Murder, due out in March 2011.

Fluke is also writing the title novella in a Christmas collection that includes stories by Laura Levine and Leslie Meier. Gingerbread Cookie Murder releases in October 2010.

Joanne Fluke loves to bake as much as she loves to write.

For those snowbirds who’ve flown to warmer climates, you can see Fluke during signings in California, Arizona, Texas and Florida. Go to her website at http://murdershebaked.com for more information. 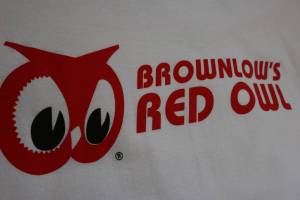 I’D LIKE TO SUGGEST one other locale for a Fluke book signing: tiny LeRoy near the Minnesota-Iowa border. This town of 900 is home to Brownlow’s Red Owl Grocery Store, a family-owned business since 1933 and the only Red Owl store still remaining in Minnesota. Red Owl groceries were once the norm in our state. Fluke’s fictional businesses include Lake Eden’s Red Owl Grocery Store. I expect Fluke would get a warm welcome from the folks at the Red Owl in LeRoy. You betcha.