The white elephant gift no one wants December 12, 2011

KUDOS TO MY FRIEND Jesse.

He truly outdid himself at the annual Family Game Night Christmas party at Trinity Lutheran Church in Faribault this weekend. And he wasn’t even there. Rather, Jesse was hermited away in his grandpa’s farmhouse near Barrett, without internet or more than four television stations, writing his dissertation.

Jesse left his wife, Tammy, behind to carry out his mission. Initially, it couldn’t have gone any better had he been there himself to execute his plan.

But he missed the moment when my husband selected the gaudy holiday picture frame from among the wrapped white elephant gifts. From the shape of the package, I knew immediately that Randy had chosen the wrong gift—the garish Christmas-themed frame which each year is returned to the exchange pile. No one wants the darned thing. It’s that ugly.

Last year, Jesse took the frame home after I brought it back for the exchange. Apparently since then, my friend has been plotting his revenge.

He got it Saturday. Randy opened the gift to find my face smiling back at him. Jesse had taken my outdated 2005 photo from this blog, enlarged it and tucked it into the frame underneath mini photos of his family, another family and my family. It’s tradition that whoever gets the frame must tuck a photo into it. Jesse started this by placing Tammy’s high school graduation picture into the frame. That image has mysteriously disappeared.

This year, though, Jesse tweaked the tradition by blowing up my image. (BTW, I don’t look much like this anymore, readers. My hair is shorter and graying and my glasses are rectangular, not oval.) 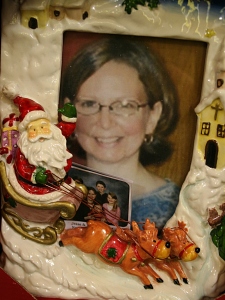 The frame no one wants.

Anyway, party-goers doubled over in laughter when they saw my framed photo in the hands of my loving husband. I waited to see if he would keep my picture or trade it away in a snap.

But Randy hung onto the photo until the very end, when he traded Tammy for a decorative rolling pin (equally as ugly as the frame).

I can only imagine the look of surprise on Jesse’s face when he arrived home from Barrett to see my lovely face staring at him from that gaudy picture frame.

DO YOU HAVE a tradition like this, where you keep passing the same unwanted gift around to family or friends? I’d love to hear about your shenanigans via a comment.