Inside the Owatonna orphanage museum: Heartbreaking stories and photos January 18, 2012

A telegram sent to an Owatonna orphanage in 1892 announcing the arrival of two sisters.

It is an archaic word, that word “waif.” So I must page through my Webster’s New World Dictionary to confirm that I fully understand its meaning.

2 a person without home or friends; esp. a homeless child   3 a stray animal

The definition is mostly as I expect, except for the “stray animal” part.

It hurts my heart to read the telegram sent in 1892 to the Minnesota State Public School for Neglected and Dependent Children in Owatonna.

It hurts even more to view the photo of the “waifs,” sisters Mary and Clara, taken on the day they arrived. You can see the despair in their eyes, almost hear their wailing, feel their terror. If I could step back into time, to that day in August 1892, I would wrap those little girls in my arms and hold them and stroke their hair and give them all the love they never knew. 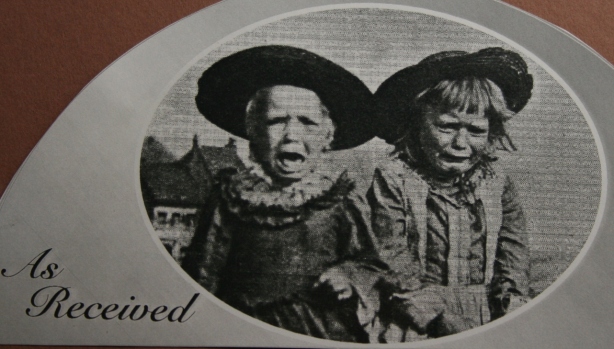 Sisters Mary and Clara, upon their arrival at the Minnesota State School.

Of all the documents and images displayed at the former school, now a museum, this one of the sisters sticks with me for the emotions it captures and evokes. I first saw the photo several years ago during an initial visit to the Minnesota State Public School Orphanage Museum. I have never forgotten it.

This past weekend I was back at the orphanage site to tour a new Owatonna Arts Center exhibit, “Where are the Children,” by Judy Saye-Willis. The Northfield artist taps into the location to pull together an introspective display about children with input from a variety of artists and a writer. I was especially impressed with the graphite drawings of children by Cambridge artist Marilyn M. Cuellar. (Note that Cuellar’s art pieces displayed in Owatonna are copies and not originals.) 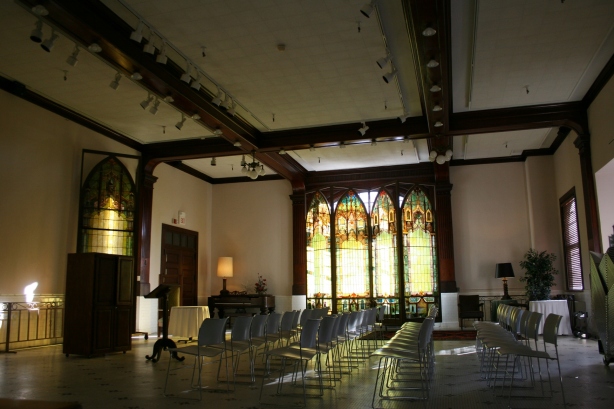 After perusing that exhibit, I walked toward the museum part of the building, through the former school dining room that today serves as a venue for wedding receptions, concerts and more. I hadn’t intended to go to the museum, but my husband had already wandered over there.

Signage under a state school photo in a section of the museum.

This visit I didn’t study each document and photo in depth. Rather, I swept through the U-shaped exhibit area, focusing on specific segments to photograph like the 1892 telegram and photos of the two sisters, including this one taken at a later date. 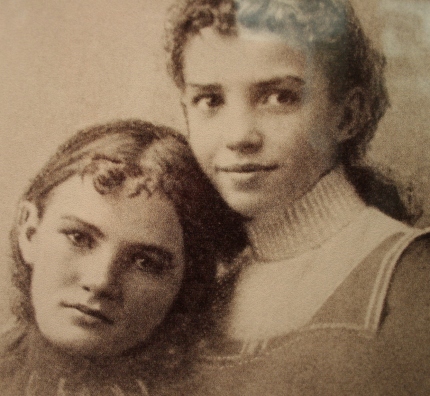 Mary and Clara, hardly recognizable as the same sisters who arrived in 1892.

I paused, though, to listen to a visitor talk to me privately about her father and an aunt who lived here. She spoke without a hint of bitterness, which surprised me given the negative experiences of many children who called this school home. Her father eventually was placed with a southern Minnesota farm family. In many instances, these families physically and emotionally abused the state schoolers. Her father, she said, was hit once, but never again.

Contracts were signed between the school and families, typically farm families, allowing state schoolers to live with and work for these families. The families were to provide $100 in wages and two suits of clothing.

Later, I would photograph a radiator brush, “a Matron’s favorite tool for punishment,” according to the Fall 2010 issue of the museum newsletter, The Radiator Brush.

A dreaded radiator brush rests atop a radiator in the museum.

Next, I photographed “the chair,” also used to punish children.

Chairs like this one on display in the museum were used to control and punish children and keep them in their place.

I cannot imagine living here in this institution, separated from family.

Yet the school, despite its failings, offered for many children a better alternative than remaining in abusive and neglectful home settings too tragic to even fathom.

And so that is how sisters Mary and Clara, two little waifs who had been “the victims of extreme cruelty and neglect,” ended up on a train bound for the Minnesota Public School for Neglected and Dependent Children.

One of the photos on display in the museum of a matron and her girls.

A snippet of a letter from third grader Arthur Peterson to his mother. You can almost hear the desperation in his words: "I hope you will come up to see me."

Museum exhibits, mostly in words and photos, but also artifacts, tell visitors about life at the state school.

This photo of a little state school boy caught my eye. The museum's collection includes more than 1,100 original photos and an additional 150 reproductions. You can't help but be moved by such soulful images. 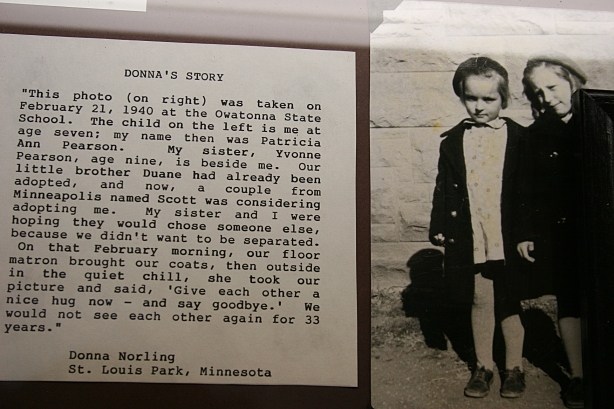 Patricia Ann Pearson, 7, left, and her sister, Yvonne, 9, on the day they were separated. They would not see each other for 33 years. Theirs is only one of thousands of heart-wrenching stories of separation.

FYI: From 1886-1945, nearly 11,000 orphaned, abused and/or abandoned children were sent to the Minnesota State Public School for Neglected and Dependent Children. Today visitors can tour the former school grounds, including a cottage and the cemetery. Click here to learn more about the museum. In 2011, an estimated 7,000 visitors toured the museum and Cottage 11.

18 Responses to “Inside the Owatonna orphanage museum: Heartbreaking stories and photos”