“EVERYBODY, MAY I HAVE your attention, please. There’s been a tornado warning issued for Lyon County. So if you would like to leave, you may want to do so now.”

With that announcement from my middle brother, guests celebrating at an 80th birthday party open house for my mother on Sunday afternoon in the Vesta Community Hall scattered, scurrying to their vehicles as gray clouds threatened in the neighboring county to the west.

Some of the guests gathered in the Vesta Community Hall for my mom's 80th birthday party.

It had been a weekend of severe weather, with tornadoes devastating parts of Oklahoma, Kansas and Iowa, killing five. Now the remnants of that powerful storm were moving into southwestern Minnesota.

Everyone at the party—except a cousin who joked that maybe my brother was pulling a ruse to get guests to leave—was taking the news with serious concern in a community which last July was struck by devastating 90 – 100 mph winds. Others in attendance live on farms that were hit by a tornado in that same 2011 storm system. And at least one guest was from St. Peter, devastated in a 1998 tornado.

My brother’s announcement around 3:30 p.m. brought an abrupt end to a gathering of several hundred in the old community hall in a town of around 300, where, if you had to seek immediate shelter, you would need to flee to homes or huddle in bathrooms at the hall. All guests chose to leave, some plotting routes home based on the approaching storm.

One—my eldest daughter—would later find herself in the heart of the fast-moving storm as she drove along U.S. Highway 212 back to Minneapolis. My youngest brother, who also typically drives 212, back to Woodbury, changed his route after seeing a wall cloud to the north and being advised by a policeman at a Redwood Falls gas station to follow Minnesota Highway 19. That would keep him to the south of the storm.

My husband and I, along with our son, left Vesta perhaps an hour later than our daughter, with my youngest brother probably a half hour behind her.

We had no idea they were driving toward the storm. Until we switched on the radio to a New Ulm station which, for the next hour, broadcast repeated tornado warnings for the Brownton area, a small town along U.S. Highway 212. At the first announcement, I realized our eldest may be precisely in the path of the tornado.

With sporadic cell phone coverage, it took me awhile to reach and warn her of her of the impending danger.

Eventually we connected. My daughter was fully aware, having seen a wall cloud and driven through hail. She didn’t know if she had passed Browntown; she had just driven by Glencoe. Unable to find a road map anywhere in our van, I tried to visualize the string of communities along U.S. 212. I told her I thought she was east of Brownton. Later, after stopping at a New Ulm gas station to view a Minnesota map, I confirmed her location to the east of the storm.

Then there was my youngest brother to worry about, again, as another tornado warning had been issued, this one for Sibley County. Highway 19 would take him right into that county. Fortunately, that storm would stay some five miles to the north of his route. I didn’t even try to phone him again as I knew he was listening to the radio and was alert to the situation.

And so the 2 1/2-hour drive back to Faribault for us progressed as we listened to several radio stations, catching the latest weather updates, our eyes shifting often to the north, to those dark, dark skies under which our loved ones were traveling.

When our daughter phoned to say she’d nearly reached her Minneapolis home, I finally relaxed and the radio was switched off as we drove into heavy rain under dark, but not foreboding, clouds.

Looking to the north as we drove east back to Faribault. 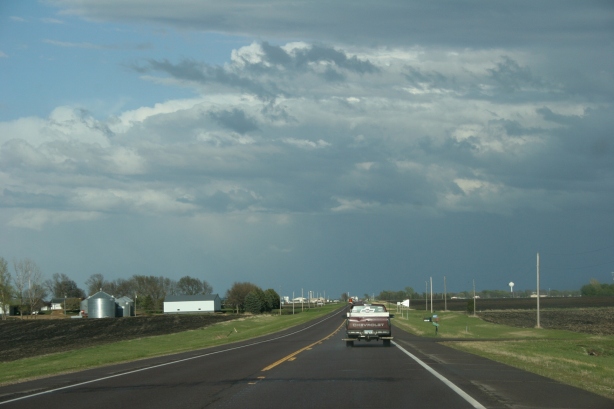 On U.S. Highway 14 near Nicollet, just to the south of Sibley County.

FYI: I have not checked many media outlets yet to determine whether any of the areas in the tornado warning areas experienced tornado touch-downs. However, from initial reports I heard last night, Minnesota came out relatively unscathed. Tornado sirens never did sound in my hometown of Vesta. But still, we were prepared with the warning just to the west in next-door Lyon County.