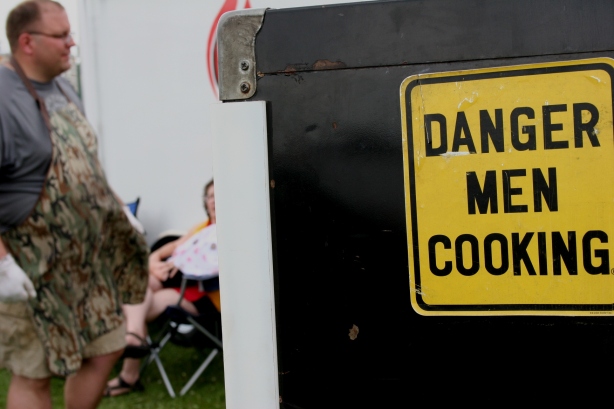 One of the humorous signs I spotted on BBQ equipment at the Minnesota in May BBQ & Cheese Festival in Faribault.

FROM TEAM “Drop It Like It’s Hot BBQ” of Little Canada to “The Oinkologists” from Rochester to the “Uff da- That’s Good Barbeque” from Anoka to “Rebel Fire Que’n Company” from Lake City to “The Heat Is On” from North Saint Paul, the creative names of teams competing in the Minnesota in May BBQ & Cheese Festival in Faribault this weekend simply amused me.

Some 63 – 65 teams, depending on who you asked, vied for $10,000 in prizes during the Kansas City Barbeque Society sanctioned event at the Rice County Fairgrounds in Faribault on Friday and Saturday.

My husband and I each ordered pulled pork sandwiches from two different vendors for a taste-test comparison. Hog Wild BBQ and Grill served up a smoke-flavored, ham-like sandwich (above right) while Daddy O’s BBQ Shack presented a pork roast-like sandwich which I flavored with a North Carolina sauce crafted by Jeff LeBeau from The Depot restaurant in Faribault. We each really liked our distinct sandwiches.  However, the bun from Daddy O’s rated far superior to the one from Hog Wild. 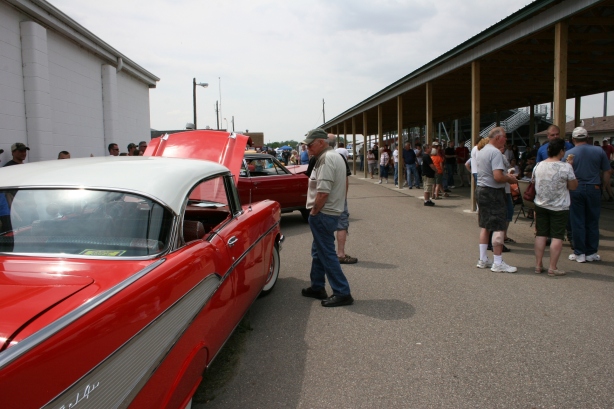 This year the Faribo Drag-On’s car club moved its annual show to the fairgrounds as part of the BBQ fest.

From the tantalizing aroma of grilled and smoked meat to the savory taste of pulled pork sandwiches purchased from vendors to the friendliness of the BBQ teams to the tasty cheese samples served by area cheese makers to the 165 classic cars and trucks in the car show, it was an event that truly impressed my husband and me. You can bet we’ll be back next year for the third time. 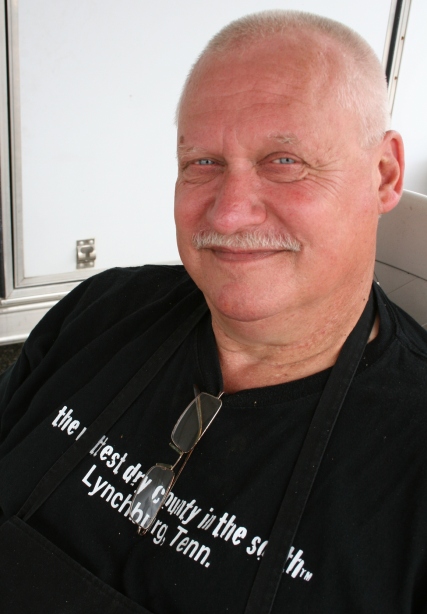 Mark Born, who started the Minnesota in May BBQ contest 12 years ago.

Mark Born of team “The Heat Is On” from North Saint Paul has been participating in BBQ contests like this for 15 years and has the hardware to prove just how much he’s advanced from backyard smoking of fish and other meat. He’s a multiple grand champion BBQer in seven states and today competes in upwards of two dozen competitions annually as far away as New York, Florida and Las Vegas.

Not only that, 12 years ago Born started the Minnesota in May BBQ competition which has also been held in Cambridge and Austin. For the past two years, Faribault has hosted the event, this year adding cheese to the fest. 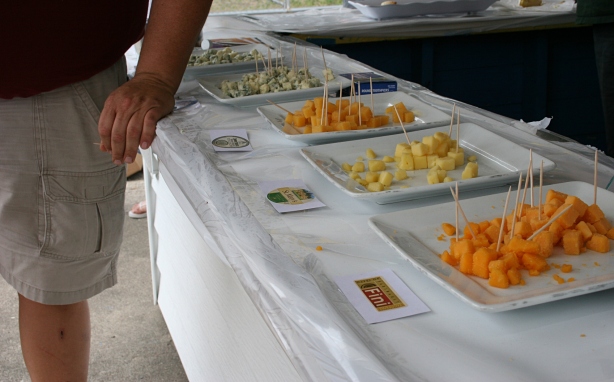 Fest-goers could sample and buy cheeses from Caves of Faribault, Alemar Cheese Company of Mankato and Shepherd’s Way Farms of Nerstrand at the cheese shack. 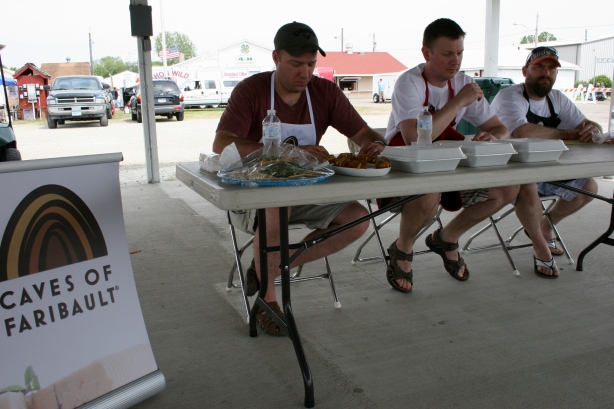 Judges evaluated 10 entries in the Grilling with Blue Cheese Contest. Each entrant received 9 ounce of St. Pete’s Select blue cheese from Caves of Faribault to use in preparing an entree or side dish. 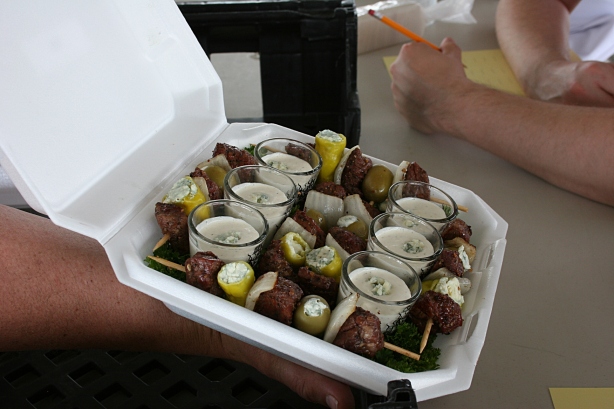 Entries like this one in the Grilling with Blue Cheese contest were judged on appearance/creativity and taste.

Russ and Marti (no last names given; they’re judges) traveled 1 ½ hours from Forest City, Iowa, to judge their 32nd BBQ contest in seven years. As certified volunteer judges, they evaluate the BBQ entries for taste, tenderness and presentation/appearance. They try, they say, not to be too subjective in judging the foods which are delivered, six to a judge, in plain white Styrofoam boxes. Contestants who try “something too fancy” in presentation risk disqualification, Marti says.

And why does this Iowa couple judge BBQ competitions?

“You can’t buy barbeque like this anywhere in the country,” Marti says, explaining that the competitors use the best meats, the best everything, when they compete.

Talk to the BBQers and you’ll learn that some are competing for the first time while others have been at it for years, even decades. They all smoke/grill an abundance of meats, assuring the just-perfect entry to submit to judges. 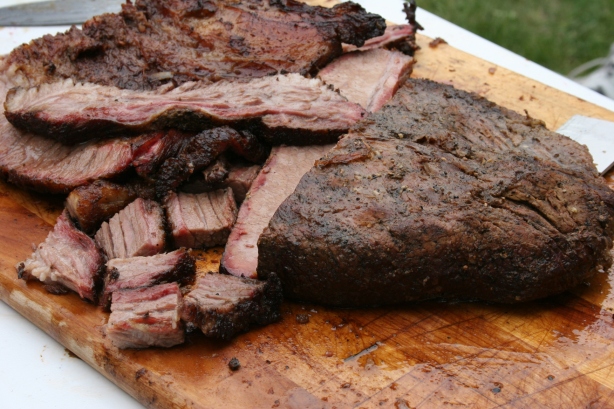 A BBQer’s extra beef brisket not entered in the competition.

These folks are serious BBQers, pulling into the competitions with over-sized grills and bags of charcoal and secret BBQ recipes they won’t share. 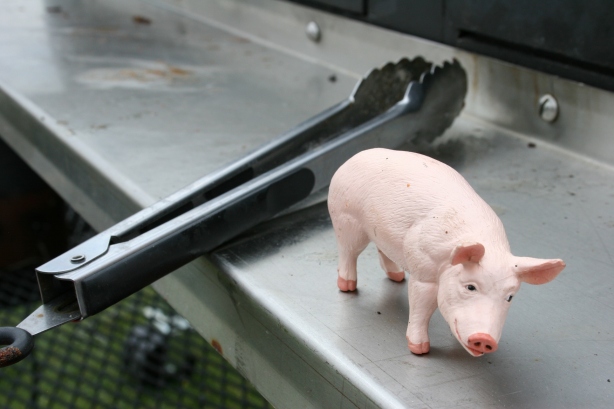 The Oinkologists, brothers Andy and Mike Braun from Rochester and Hugo, brought along their “lucky pig.” It was their second competition, but first time using their good luck charm. 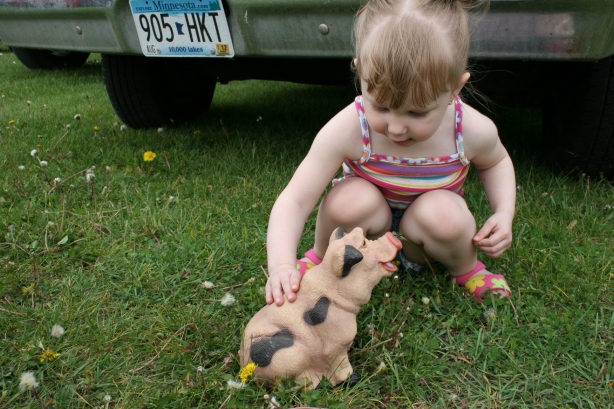 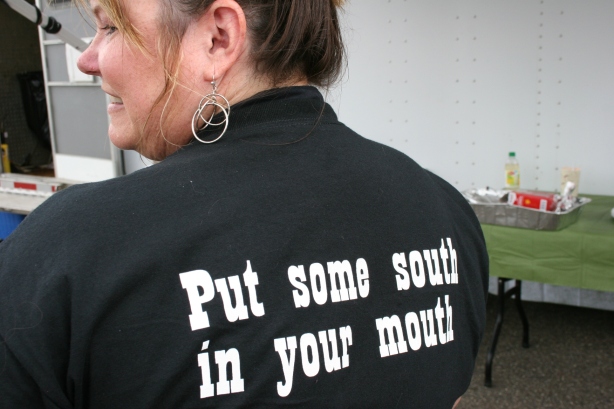 A member of Rebel Fire Que’n Company of Lake City, in her fifth year of competing.

“It’s so kicked back,” my husband judged as we meandered among the BBQers’ tents and campers and BBQ equipment Friday evening and Saturday afternoon.

He’s right. The Minnesota in May BBQ festival rates as fun and kicked back—for both contestants and spectators.

DID YOU ATTEND or participate in the BBQ fest in Faribault this past weekend. If so, what did you think of the event? If you’ve attended/competed in a BBQ fest elsewhere, tell us about it via a comment.

CLICK HERE TO READ an earlier blog post from this weekend’s Minnesota in May BBQ & Cheese Festival in Faribault.