Thank you, Mr. Postmaster, for finally hearing the voice of rural America May 14, 2012

FINALLY, AN IDEA that makes sense for continuing postal service in parts of rural America.

The United States Postal Service revealed a plan last week that could keep thousands of small-town post offices open by reducing hours. That’s certainly better than the alternative for places like Hope, Minnesota, an unincorporated community just off Interstate 35 south of Owatonna in Steele County. Last summer Hope’s 120 residents learned that their post office, like thousands of others across the country, likely would close in a cost-cutting measure.

Under a proposal, the Hope Post Office will remain open with daily window hours cut from eight to two.

Residents of Hope didn’t simply give up and accept their fate.  Instead, they circulated petitions and attended meetings and voiced their opinions and filed an appeal. To no avail. The postal service announced in April that the Hope Post Office would close. But now it appears the Postal Service has had a change of heart about closing thousands of small-town post offices nation-wide.

Postmaster General and CEO Patrick R. Donahoe said in part last week: “…we’ve listened to our customers in rural America and we’ve heard them loud and clear—they want to keep their post office open. We believe today’s announcement will serve our customers’ needs and allow us to achieve real savings to help the Postal Service return to long-term financial stability.”

So what does all that official talk mean? Some 13,000 post offices are now on “a preliminary list (for modified hours) that requires additional review, analysis, and verification and is subject to change.” Of those, 407 are located in Minnesota.

Well, the Postal Service is certainly covering all of its bases with that language, leaving room to tweak proposals and change plans/minds. I suppose one can never be too careful and cautious when one is a government entity. Meetings will be held in the affected communities to review options, which could take more than two years to implement.

Additional alternatives, according to the Postal Service, include mail delivery to affected customers via rural carrier or highway contract route; contracting with a local business for a village post office; and offering service from a nearby post office.

In a news release issued May 9, Postal Service Chief Operating Officer Megan Brennan says: “The post offices in rural America will remain open unless a community has a strong preference for one of the other options. We will not close any of these rural post offices without having provided a viable solution.”

The post office in Randolph is facing reduced hours, dropping from eight daily to four.

This certainly comes as welcome news to the folks in Hope and in many other Minnesota communities. In my region, post offices in Morristown, Warsaw, Kilkenny, Webster, Nerstrand, Dennison, Hampton, Castle Rock and Randolph are facing possible reduced hours.

My hometown of Vesta 120 miles to the west, along with nearby Wabasso, Wanda and Wood Lake, also made the modified hours list.

In every corner of Minnesota and hundreds of places in between, you’ll find those 407 small-town post offices where window service is likely to be trimmed. The Minnesota list fills slightly more than eight pages on a 260-page document that includes some 13,000 post offices across the U.S. To read that list, click here. 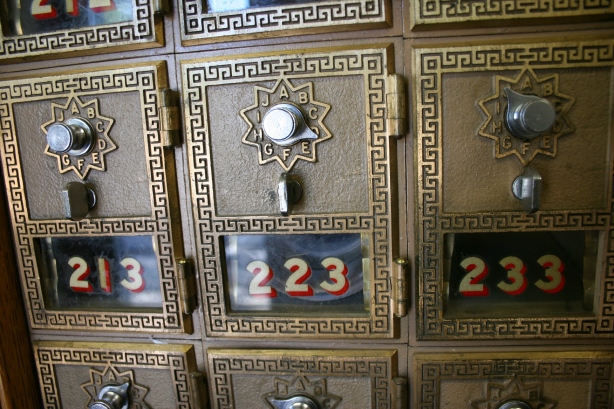 The Mantorville post office, where this photo was taken, is on the preliminary list of southeastern Minnesota post offices slated to have daily hours cut from eight to six.

It’s never a good thing, to reduce service in a small town. But closing the post offices would be worse.

I sometimes wonder if the decision-makers have ever set foot in these small towns, if they grasp the importance of a post office as an integral fiber in the fabric of community. Post offices are more than a place to pick up mail, to purchase stamps, to send a package. In these small towns, they are also community gathering places, a locale to exchange news, a spot to reach out to neighbors and a symbol of community identity.

I’ve witnessed, first-hand, how losing a school, a church, a business, can impact a rural community. In Vesta, for example, the town’s 330 residents can’t even buy a loaf of bread or a gallon of milk; they must travel some 20 miles for those staples. I remember when my hometown’s Main Street was lined with businesses, including a grocery store, two hardware stores and more.

Yes, times have changed. We are a more mobile society. We communicate via cell phones and e-mail and Facebook and other social media. But not everyone. In these small towns—the ones where the Postal Service initially considered shuttering post offices—many elderly residents don’t own computers, relying instead on old-fashioned mail delivery to pay bills and send letters and hear from loved ones. The post office is vital to their system of communication.

That the U.S. Postal Service finally heard the loud and clear voice of rural America, and perhaps understood that voice, pleases me as it should thousands of other Americans.

The wings of the white-lined Sphinx moth beat non-stop in a blur of motion as it feeds on the nectar of Superbells.

IF I DIDN’T KNOW BETTER, I would have thought it a hummingbird, this rapid wing-beating insect that swooped into my yard Sunday afternoon, drinking the sweet nectar of the pink-striped Calibrachoa.

Often confused with a hummingbird, this white-lined Sphinx moth whips its wings at up to 85 beats per second.

No wonder I found photographing this fascinating creature an incredible challenge. Perched on a step ladder at near eye level with a hanging flower basket I’d gotten for Mother’s Day just hours earlier, I tried to focus my lens on the energetic moth. I mean, honestly, could the moth simply just hover in one spot for maybe a minute?

It didn’t help either that the wind swayed the basket and that I’m a teeny bit afraid of anything with flapping wings. When the moth circled my head and seemed to take an interest in the floral-patterned shirt I was wearing, I grew a little nervous.

And then the husband, unbeknown to me, grabbed at my pant leg. I screamed. He laughed. The moth zoomed away.

Later, I would read online that the Sphinx moth, since it has no ears, could not possibly have been frightened by my screech. Rather the quick jerk of my camera and my rapid descent from the ladder likely temporarily caused the moth to exit from the patio premises.

Apparently, though, the lure of that sweet nectar was too much as the moth returned. I climbed onto the ladder again and then tried some under the basket shots until the moth, seemingly intoxicated by all that drinking, zig zagged towards the woods.

Aiming up from under the flower basket, I captured the Sphinx moth zoning in on a blossom.

Another down under, looking up shot showing the moth’s proboscis dipping into the flower for a sip of nectar.

HAVE YOU EVER SEEN, or tried to photograph, a Sphinx moth?