Accident reports from the interstate June 16, 2012

WHEN WE HEADED out for Fargo late Thursday morning northbound on Interstate 35, I never expected this to be anything but a long, five-hour road trip.

But we were only a half hour into our drive when we ran into rain and this scene along Interstate 35W near County Road 42 in Burnsville.

This bus ran off Interstate 35W in Burnsville Thursday morning.

Little did my husband, son and I know this bus crash would be just the first of three notable accidents that would occur along our route.

Thursday evening while traveling on a Fargo city street, we were caught in the middle of this scene in which a car rear-ended a bus. 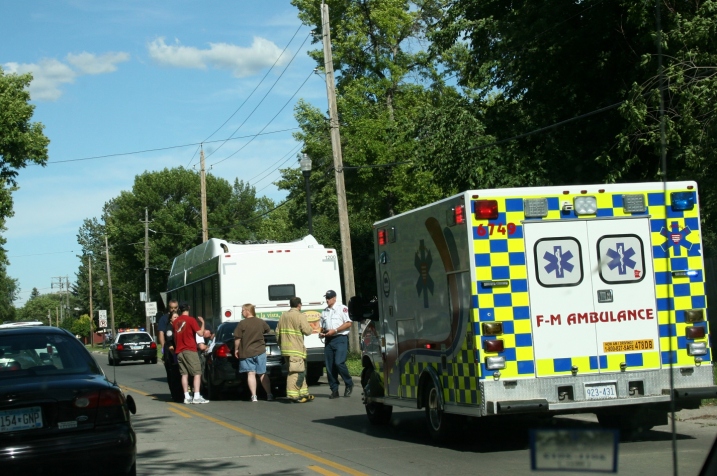 And then the second accident involving a bus, on a Fargo city street.

Emergency personnel speak to the driver of the car, still inside the car, which rear-ended the bus.

But it got worse, way worse.

Friday afternoon, driving on Interstate 94 east of Moorhead around 4:30 p.m. we spotted dense black smoke in the distance.

“Looks like someone burning tires,” my husband said and we thought nothing more of it.

That is until traffic began to merge from the left lane into the right as the four-lane narrowed to two lanes in a bridge construction zone about one mile ahead. Traffic ground to a near-halt.

And then we realized, when the vehicles in the left lane began turning off the eastbound lanes onto a maintenance turn-around and driving back west that the smoke was the result of an accident on the interstate.

We followed the leader back west (westbound traffic was not leaving the accident site) and exited the interstate at the Sabin exit, pulling off a county road to figure out an alternative route.

It was then, while my husband and son were consulting maps, that I stepped from the van and shot this distant scene of smoke from a fiery head-on crash.

We pulled off Clay County Road 79, which runs along Interstate 94, to plot an alternative route. This was the scene unfolding before us as a result of the fiery head-on crash.

According to The Forum of Fargo-Moorhead, an eastbound car driven by Roberta Haspel, 58, of Barnesville crossed into the westbound lane in a construction zone and collided head-on with a semi driven by Gary Sather, 65, of Bismarck. The semi went into the median and caught fire.

Haspel reportedly was airlifted from the scene and hospitalized in critical condition. The truck driver was treated for non-life-threatening injuries.

It was an absolute relief to hear that no one was killed in this fiery crash.

I mean if you had seen the smoke…

As we drove on the Clay County Road 11 overpass over Interstate 94, I shot this photo. The interstate curves to the south.

Another shot from the Clay County Road 11 overpass as we followed an alternative route to Sabin. The westbound lanes of I-94 were also shut down and traffic rerouted off the interstate. Here you see eastbound traffic, which was reportedly backed up for seven miles all the way to Moorhead.

An overview showing a portion of a beautiful western Minnesota memory garden graced with flowers and garden art and a bench for quiet contemplation, photographed Friday evening.

SUNLIGHT DAPPLED THROUGH the trees as the summer day transitioned into evening during that magical hour(s) of light beloved by every photographer.

I was cognizant of the fleeting, perfect light as I meandered, camera in hand, along the stone path in the garden edged by swamp grasses on two sides, by manicured lawn on the other borders.

The buttercup yellow of a columbine.

I admired the columbines and Russian sage, the zinnias and the day lilies, the promise of daisies, the sedum and the ground-hugging creepers that crept between the stones laid as a walking path. 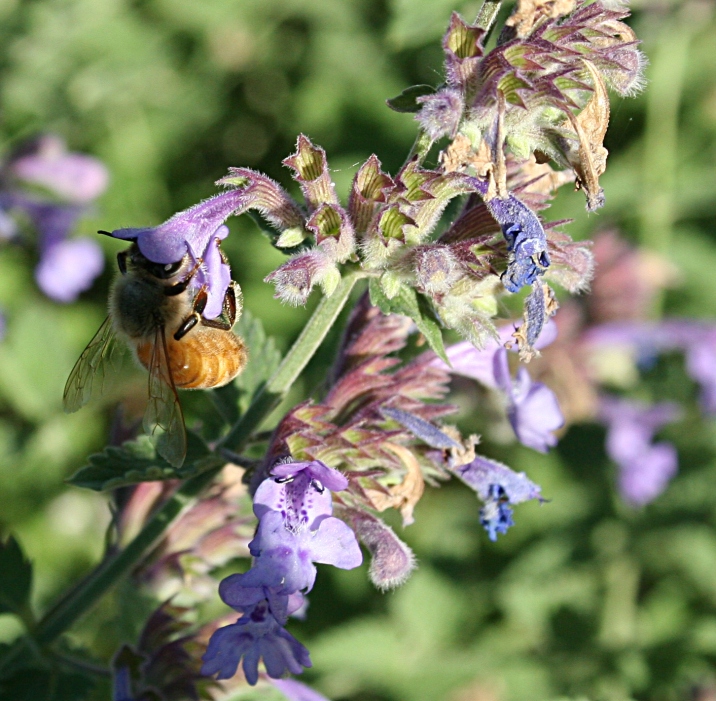 A bee sips in the early evening.

Once I bent close to photograph a busy bee and then an angel, hands clasped in reverent prayer, wings spread wide, stones from Montana ringing her feet.

Half way through the garden I paused beside four baseball bats laid end to end in a rectangular shape honoring the boy who loved baseball.

The newest addition to the garden, a solar-powered sculpture of a boy holding a jar of fireflies.

I circled along the back edge of the garden and knelt before garden art of a boy holding fireflies captive in a jar. I returned later, when darkness crept into the day, to photograph the fireflies aglow. I smiled at the memory of the boy catching fireflies. 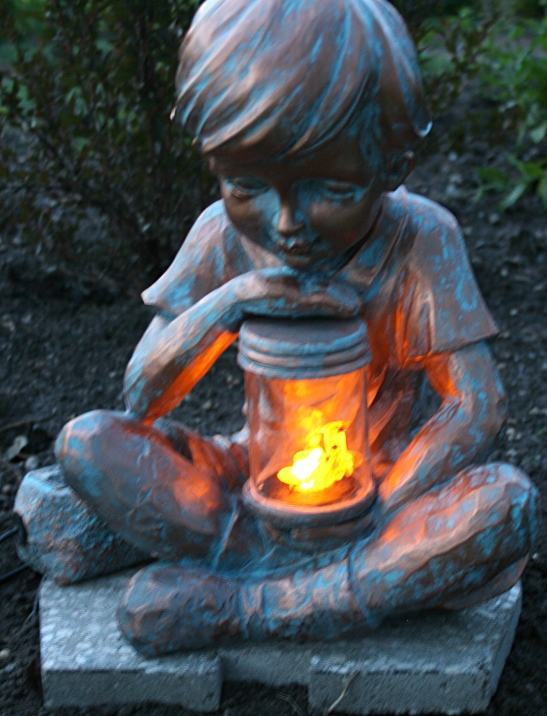 And when darkness began to descend upon the prairie, the fireflies were aglow. I plan to get a sculpture just like this for my flower garden.

I read the marker at the garden entrance, before entering and then again upon leaving. I wondered how a mother and a father could bear such grief.

The entry to Justin’s garden.

And the next day, I hugged the parents of the boy—my nephew—who would have celebrated his 30th birthday. Today. And my husband and son and I gave Justin’s mother half a dozen red roses and a blue balloon to release with the other blue balloons she and my brother-in-law will send heavenward today. To celebrate the young man whose life held such promise, such love, such hope for the future.

THIS POST IS WRITTEN  in loving memory of my nephew, Justin, who was born on June 16, 1982, and died at the age of 19 on August 20, 2001, from Hodgkin’s disease. His parents created a beautiful memory garden in their yard honoring their son.