My thoughts as a Faribault resident on the alleged crimes at Shattuck-St. Mary’s School October 10, 2012

In the distance you can see the clock tower on Shumway Hall at Shattuck-St. Mary’s School in Faribault, photographed last fall from City View Park.

I’D LIKE NOTHING BETTER today than to ignore the horrible, unspeakable allegations which have thrust my community of Faribault into the headlines.

In fact, Tuesday morning, I wanted to hide the Faribault Daily News from an overnight house guest from California and told him as much.

All but one-fifth of the newspaper’s front page was devoted to coverage of the still unfolding story about alleged sexual misconduct involving at least six victims at a prestigious private college prep school on Faribault’s east side. Former Shattuck-St. Mary’s drama teacher Lynn Seibel (from 1992 – 2003) has been charged with 17 felonies, including 10 of sexual misconduct, and is being held in the Los Angeles County Jail, according to the news report.

There are also accusations from law enforcement that school officials failed to report the discovery of child pornography on Seibel’s computer in 2003, the same year the former drama teacher lost his job at the school. Shattuck officials say they reported their discovery to authorities. I don’t know who’s telling the truth and who isn’t in this part of the case. That’s not for me to decide.

What I do know is this: Awful, horrible allegations like this make you realize that no place, no place at all, is immune from unspeakable crimes against our children by those in positions of authority. If, indeed, there has been any sort of cover-up—remember my wanting to hide the Faribault Daily News from my California house guest—then the case takes on additional significance. Thoughts of the Jerry Sandusky case can’t help but flit through my brain.

That all said, let me tell you what connection I, as a Faribault resident, have had to Shattuck-St. Mary’s and how I’ve viewed the school up until now. Mostly, I’ve always thought of Shattuck as a boarding/day school where rich people send their kids. (Current tuition ranges from $26,950 for domestic day students to $42,450 for international students.) Although that “rich people” conclusion probably is not entirely accurate, that is what I, and I expect many Faribault residents, think. I’m just being honest here with my opinion.

Landmark Shumway Hall at Shattuck during the annual Christmas Walk.

Shattuck is also an internationally-known hockey school, turning out winning teams and youth who go on to play professional hockey. I’ve attended one hockey game there and also enjoyed a figure skating show during the school’s annual Christmas Walk. 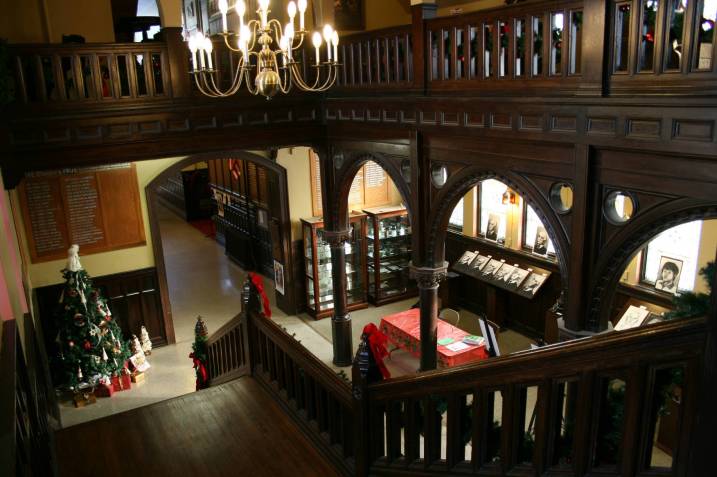 If one place captures the beauty of Shattuck, it would be the grand stairway in Morgan Hall photographed during the Christmas Walk.

In addition to the open house holiday event for the community, Shattuck hosts an annual Easter egg hunt and numerous arts-related performances that are open to the public. 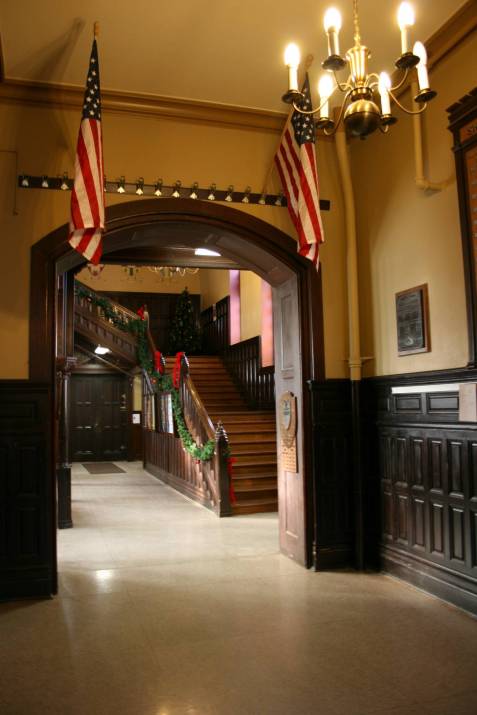 A hallway leads to the 1889 Morgan Hall, photographed during the Christmas Walk.

And then there’s the physical campus itself. Founded in 1858 as an Episcopal mission school, the school’s two campuses feature some of the most gorgeous stone buildings in Faribault. The clock tower and archway entrance to the Shattuck main campus are notable city landmarks. Locals are married here, in this beautiful setting.

To think that this lovely and historic place of strong stone walls could hold secrets of alleged sexual abuse against the children sheltered here is nothing short of heartbreaking and horrible.

TO READ LOCAL NEWS coverage on the case, click here.