This 1892 former bank building and 95-year bakery anchoring a corner of Lamberton’s Main Street is being renovated into Seven Sisters Coffee by a young couple with connections to this area of southwestern Minnesota. After the business opens, the upstairs will be renovated into loft style apartments.

DAVID AND MICHELLE can see beyond the crumbling mortar, the moisture damage, the buckling floor boards, the teal paint.

Just barely into major renovation of an historic 1892 bank building and former long-time bakery in downtown Lamberton, this couple is thoughtfully and methodically working toward their summer 2013 goal of opening Seven Sisters Coffee.

This shows the side and back view of the building, with the rear part added on to the original. Soot from a 2005 fire, which destroyed Plum Creek Crafts next door, mars the brick. Behind the building, a tree was removed and plans are to install a patio area for outdoor dining. They saved a slice of the tree to build a table.

Even the name, Seven Sisters, holds special significance for the pair as Michelle is one of seven sisters and three brothers who grew up in Lamberton, a strong agricultural community of 822 in Redwood County on the southwestern Minnesota prairie. Additionally, Michelle notes that Seven Sisters possesses multiple meanings—in Greek mythology, astronomy and even as a mountain range.

The old sign for the former Sanger’s Bakery still graces the building.

The couple may, perhaps, feel at times as if they are scaling a mountain to reach their goal of establishing a combination cafe, coffee shop and entertainment venue in the 1,900 square foot first floor of the 8,000 square foot brick building. But they are purposeful and focused and driven every week to travel 2 ½ hours from their home to proceed with their project on the prairie. 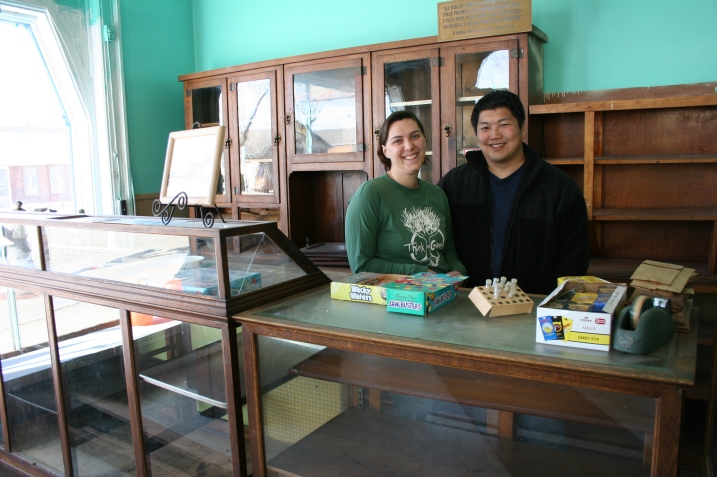 Michelle and David  are keeping the original candy and bakery goods counters and the vintage cabinet, photographed here in the front part of the building. This area of the former bank and bakery will house the cafe and soda fountain. The couple discovered a dumb waiter hidden in the area behind them in the corner.

David envisions Seven Sisters as “an artistic haven as well as a community space.” He expects “townies,” he says, to frequent the front Main Street side of the building, the bright and cheery cafe section offering a full breakfast and lunch menu and ice cream treats from a soda fountain.

Fifty loaves of bread could be baked in this 1960s vintage two-ton rotary oven. It occupies much of the space in the middle room which will become a cozy coffee shop. This room and the front former bakery/soda fountain area were painted teal after Bob’s niece first chose that hue for the bathroom. Bob loved the color so much that he painted the rest of the place teal. The color has been on the walls for 50 years. No, they are not keeping the teal color. 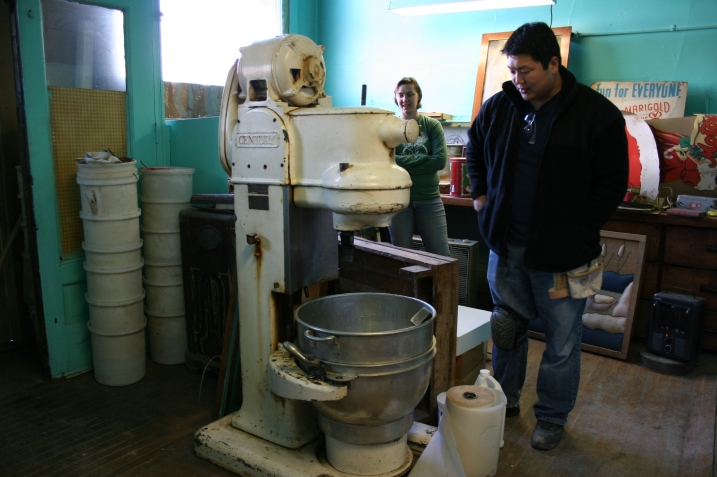 An oversized mixer also occupies space in the middle room.

The smaller middle section, once a post office entry, baking area and even home to the Sanger family, will be transformed into a warm and intimate coffee shop.

The back room, with focal point brick walls, will become an entertainment venue and artists’ haven.

And in the rear area of exposed brick walls, David expects artists and others to hang out in a more energetic and modern New York loft style space devoted to music and art and private event rental.

Tour this building, inside and out, with David and Michelle and you can see the overwhelming amount of work, inside and out, that needs to be done before Seven Sisters becomes a reality in a community already embracing the business venture.

Locals as well as those living in neighboring towns such as Revere, Jeffers and Tracy and even farther away in the regional hub city of Marshall are ecstatic about Seven Sisters, David says.

When locals George and Vern, for example, stop by to check on the renovation, David invites them inside for coffee. The two were coffee klatsch buddies of Bob Sanger, long-time bakery owner who died in March. Sanger purchased the bakery from his father, Nick, in 1961. Between Bob, Nick and previous owner, Martin Kuhar, the building has housed a bakery in the First National Bank building for 95 years.

A vintage photo of bakery owner Bob Sanger who died in March at the age of 80.

A vintage photo of the First National Bank.

Says David of his and Michelle’s decision to purchase the former bakery after Bob Sanger’s death:

The building is positively gorgeous and has a fascinating history. We had admired it for some time. The quality of the construction is superior to similar buildings of that era. We’ve always talked about opening our own business and the location and timing were right.

Our review of the local economy and the needs of the surrounding area indicates a very strong potential for growth and a serious need for a business of this kind. By offering excellence in service in three different approaches (cafe, coffee shop, event space) we will offset some of the inherent risk of this type of business. In short, it was a perfect confluence of events. We got lucky.

The pair is determined also to buy local as much as possible. Dry goods will come from Griffith’s Grocery across the street. They plan to work with Brau Brothers Brewing and Fieldstone Vineyards, located in the region. They’ll grow their own herbs.

It is clear in talking to David and Michelle that they appreciate the historic gem they’ve purchased.

A section of this original lunch counter built by Bob Sanger will be refurbished and topped with granite.

They’re attempting, they say, to retain as much of the natural charm as possible. For example, they plan to refurbish the soda fountain built by Bob; relocate an original bank fireplace facade and tile into the coffee shop and install an electric fireplace; refinish the wood floors; keep the tin ceiling; reuse the candy and bakery counters; restore an old player piano; and more.

Wooden floors, like this behind the lunch counter, run throughout the building. In one section, however, where the bank vault once stood, the floor is made of pipestone granite.

This shows a section of the original tin ceiling in the front part of the building. Ceilings are a lofty 12 and one-half feet high. 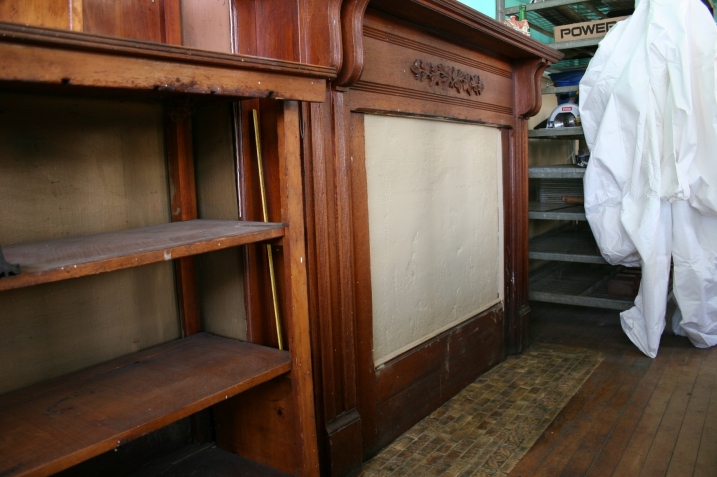 Plans are to move the facade and tile from the this original First National Bank fireplace into the coffee shop, which David will manage.

The couple is also uncovering and sifting through collectible treasures like WW I and WW II artifacts, signage, rocks, and more accumulated by Bob. So much was damaged though, beyond saving, by moisture problems in the building, David says. But they are saving what they can, possibly incorporating some of their treasures into Seven Sisters. 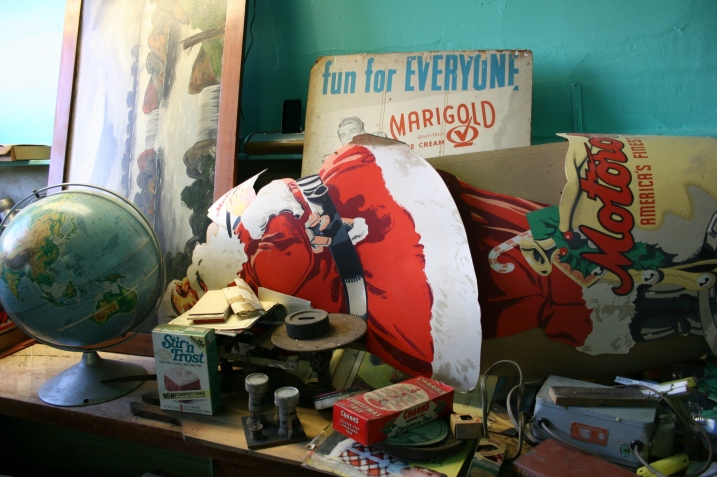 A pile of recently found treasures. 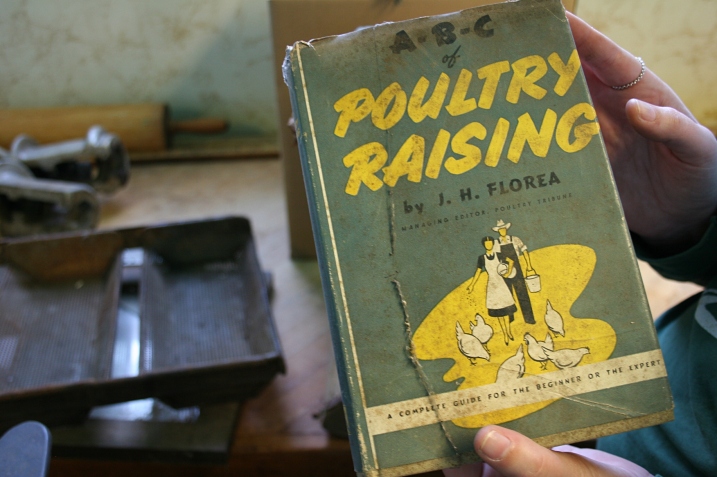 Among the old books uncovered was this one on poultry. Bob Sanger kept a flock of 100 chickens at his house, Michelle says. He used the eggs at his bakery and also sold eggs.

Another find, a vintage bomber transport chart damaged by water, like many of the old items found in the building.

Michelle has fond memories of coming to Sanger’s for sweet treats. She remembers penny Tootsie Rolls and gumballs and candy cigarettes sold at the candy counter:

Thinking about the hundreds of people who have memories of this building, I really hope we can fill that same role for the next generations.

FYI: Lamberton is located along U.S. Highway 14 about 10 miles east of Walnut Grove, childhood home of Laura Ingalls Wilder, author of the Little House children’s book series. The area is a strong draw for summer tourists interested in Wilder’s books and the Little House on the Prairie television series set in Walnut Grove.