My opinion of Fargo, the film not the city, & a television series October 2, 2012 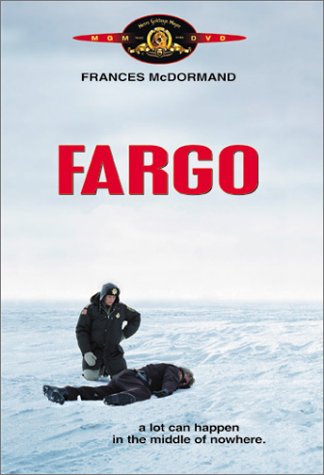 SO THEN, THERE, I watched that there Fargo movie just like I promised ya I would, albeit that promise was made, and this review written, months ago. Ya betcha.

But timing is everything. This past week the Academy Award winning writers of Fargo, native Minnesotans Joel and Ethan Coen, announced plans to executive produce an hour-long series for FX television loosely-based on Fargo. Perfect. Time to pull this review out of my draft box, update and publish it.

Since I don’t get FX, relying instead on a roof antenna to deliver several channels of programming to the single 1990s television in our house, I doubt I will ever view the new Fargo series. I have no idea what writer Noah Hawley, or the Coens, have planned for the small screen adaptation.

But, if the team can produce a show similar to the 1990s television series Northern Exposure, set in Alaska, I’d consider it a success. Honestly, I loved that geographic-centric show with strong local characters and could see the same premise working for Fargo.

That update given, let’s return to my opinion of the original Fargo film. To get you back on track, I’ll repeat the intro to this post:

So, then, there, I watched that there Fargo movie just like I promised ya I would, albeit that promise was made, and this review written, months ago. Ya betcha.

Honestly, people, I cannot write like I’m some northwoods hick. This is not how I talk either. Nor is this how Minnesotans or North Dakotans speak, although occasionally a “ja/ya” or “you bet” may slip into our conversations.

After watching the Coen brothers’ 1996 award-winning film for the second time, because I’ve visited the city of Fargo thrice already this year with the son now attending North Dakota State University, my negative opinion of the language in the movie has broadened. Now not only do I dislike the inaccurate accents and word usage, but I don’t like the bad language either. I apparently had forgotten about all the crude language written into the script.

Apparently I had also forgotten that seven—and I think I got that count right—characters are murdered. That’s a lot of bloodshed.

So what do I consider the film’s notable accuracies in depicting Minnesota?

The Coen brothers, who are native Minnesotans, got it right with the snowy highway scene, the scraping ice from the windshield, the buffet and the eggs for breakfast, the car needing a jump start and this weather phrase: “Gotta front comin’ in.”

But here’s what I really appreciate in Fargo: One of the main characters is a strong woman, Brainerd (Minnesota) Police Chief Marge Gunderson. She is gutsy and determined and she is married to an artist. That the Coens would write that key part for a woman impresses me, because, even in 2012, I am quite certain the number of women who head up police departments in Minnesota and North Dakota is relatively small.

I also like this line by Gunderson, spoken at the end of the movie as she ponders the loss of life, all because of money: “There’s more to life than a little money, you know. Don’tcha know that?”

That statement is enough to redeem the movie for me.

But I’m still wondering why this film was titled Fargo. Sure, the opening scene takes place in Fargo. But that’s it. From there on in, it’s set in Minnesota. I suppose Brainerd doesn’t have the same ringing appeal or instant identity as Fargo.

And then I’m a bit confused by the discrepancies between the opening—which states that the events depicted in the film took place in Minnesota in 1987—and the afterward, in which viewers are told the film is based on incidents but not a true story. Which is it?

IF YOU’VE SEEN the movie Fargo, what’s your opinion of it?  Do you think it accurately depicts Minnesota and/or Minnesotans? Would you have chosen a different name for the film?

What do you think of plans for a television spin-off of Fargo? What type of content would you like to see in that proposed series? Would you watch it?

CLICK HERE to read a previous post I wrote about a woodchipper and movie memorabilia from the Fargo film on exhibit at the Fargo-Moorhead Visitors Center.