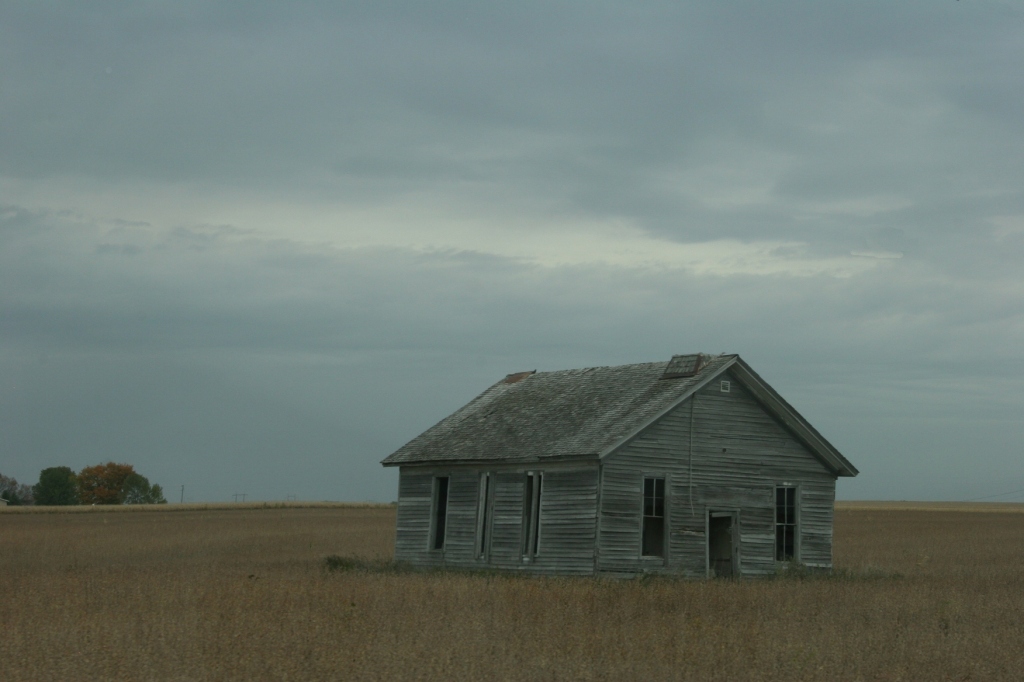 I photographed this abandoned building along a country road near Kasota last fall.

ABANDONED FARMHOUSES and rural buildings have always held a special fascination for me.

As odd as this seems, I see poetry in these buildings that lean against the landscape, that view the world through shattered lenses.

I often wonder: Who lived or worked here? Why was this farmhouse or barn or outbuilding or schoolhouse abandoned, left to decay in the elements? I feel a certain sense of sadness knowing that once this building stood strong and proud.

But, yet, I manage to see the beauty in the bones that remain—in weathered boards muted to soft shades of gray, in crooked doors clinging to rusty hinges, in roofs that sag under the weight of time.

In my mind, I have personified this abandoned building, given it new life, through my photos and my poetic thoughts.

HOW ABOUT YOU—do you see what I see in old buildings? Share your thoughts in a comment.

No cookie-cutter apartment in Kasota October 28, 2010

ON THE FRIDAY AFTERNOON I met Joshua Colonna, he was working on a “honey-do” list. He and Melissa are expecting their first child in November and she wanted him to finish a few tasks. But that didn’t stop this hospitable young man from pausing in his home improvement projects to invite me and my husband inside the couple’s Kasota home.

And what a home. The pair live in an apartment in the 1898 former Kasota City Hall. 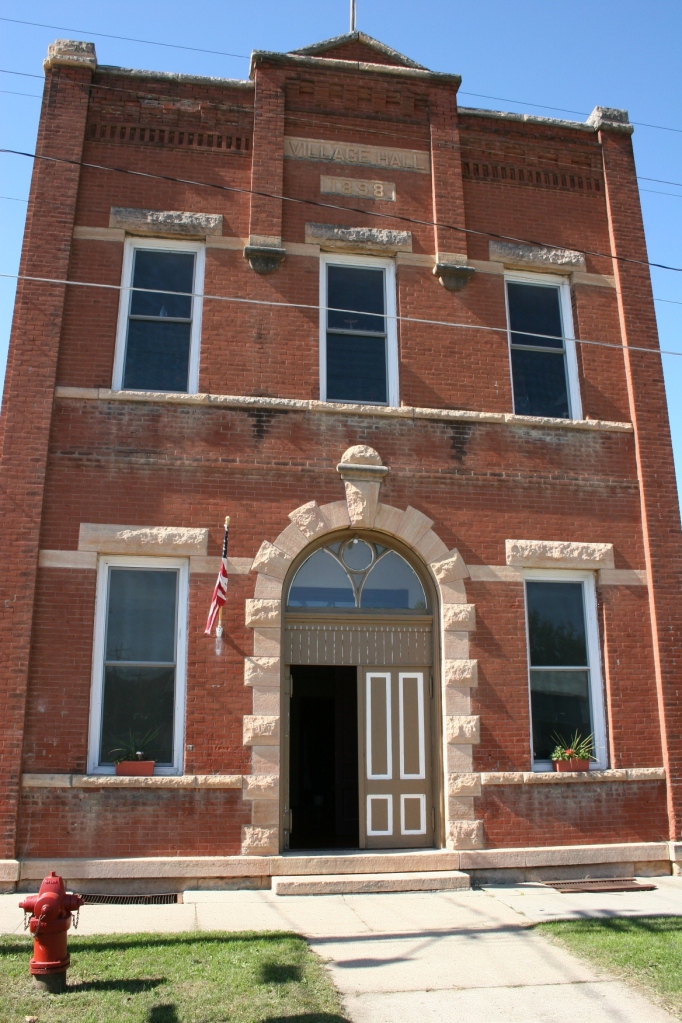 An open front door initially drew me toward the corner brick building in the heart of this small river town. I loitered outside the old hall snapping exterior photos and contemplating shots of an interior construction zone.

But when I asked a workman if I could take pictures, he deferred to Joshua, who turned down my request. Just as quickly, though, Joshua offered us an impromptu tour of his apartment, apologizing that the place was a bit of a mess due to his in-progess projects.

To my absolute delight, I walked through a side door, up several steps and onto a stage-turned-kitchen. As corny as this sounds, how cool is that? I just stood there for a minute on the old hardwood floor, totally awed that someone would have an apartment as dramatically-inspiring as this one.

The stage area has been transformed into a kitchen.

With a beadboard ceiling, decorative painted metal framing the stage, and antique furniture mixed with modern, the stage is set for a classy, airy apartment with a vintage feel. This place possesses flair, pizzazz and drama. 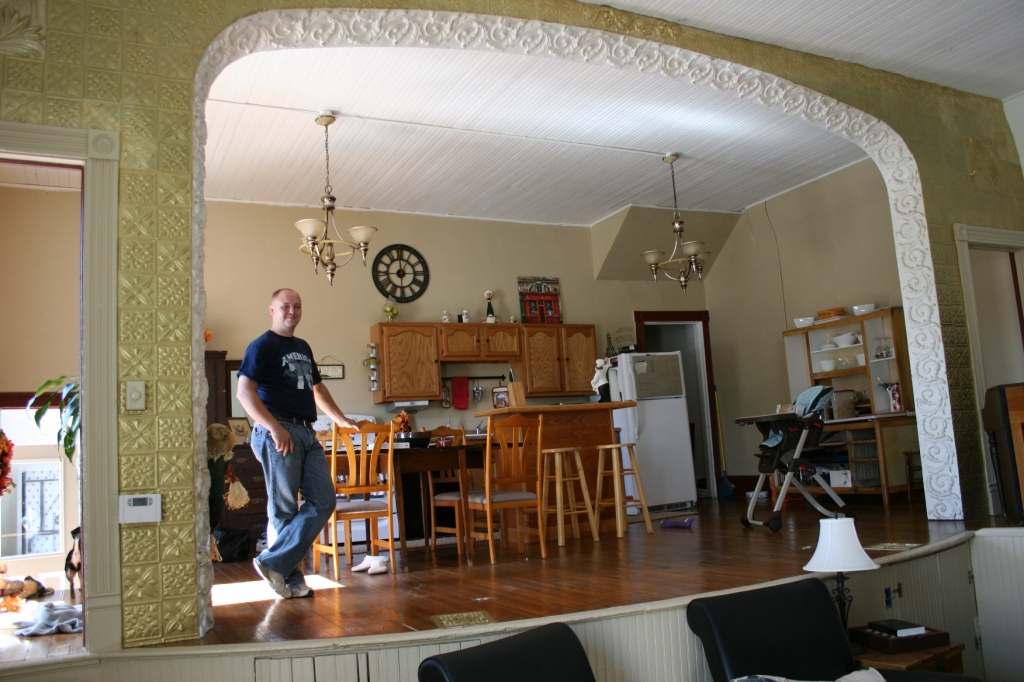 All the world's a stage, or in this case the stage is a kitchen. Here's Joshua on stage.

And that’s exactly why Joshua, who owns this apartment unit, says, “This building fills up fast. Everybody likes the feel of it, the old 1800s feel. It’s not just your cookie-cutter place.”

I can see why someone, anyone, would want to live here. What fun to have get-togethers here, mingling on the kitchen/stage and in the audience area below, now partitioned into a living room, two bedrooms and a bathroom in this apartment. And then the real kicker, on the side stage extension that veers into a corner of the living room rests Melissa’s piano, perfect for entertaining.

A stage bump-out presents the perfect place for a piano.

The stage looks onto the revamped audience seating area which has been partitioned into a living room, two bedrooms and a bathroom. Only the bathroom has a separate, lowered ceiling over it.

Joshua knew I was more than a bit impressed with his apartment given how I openly gushed over it. But then he had to go and tell me about the upstairs apartment, the bright open space where an artist lives, and about another old building he’ll be refurbishing into apartments in a nearby community…

One last angle of that dramatic, inspiring kitchen.

WHEN I WAS A CHILD, I loved the story about The Three Billy Goats Gruff. Do you remember that tale of the three goats planning to cross a bridge, but first encountering a hungry troll?

The goats, beginning with the smallest, tricked the troll into waiting for the next, and bigger, goat. The third, and largest, goat was so big that he easily tossed the troll into oblivion and safely crossed the bridge.

I’m not sure why I enjoyed that tale so much. Maybe because I owned that storybook and my mom read and reread the words until I had them memorized. Or maybe I just appreciated that three goats could outsmart a mean old troll.

Anyway, because of that childhood literary introduction to goats, I’ve always rather enjoyed these mischievous animals. I find them humorous and cute and naughty all at the same time.

So, when I saw a bunch of goats fenced in at the Kasota Zoo several weeks ago, I had to investigate. Believe me, this is unlike any zoo you’ve ever seen. Propped pallets and a hodge podge of fences corral the 32 pygmy goats at this roadside oddity on the southern edge of Kasota. 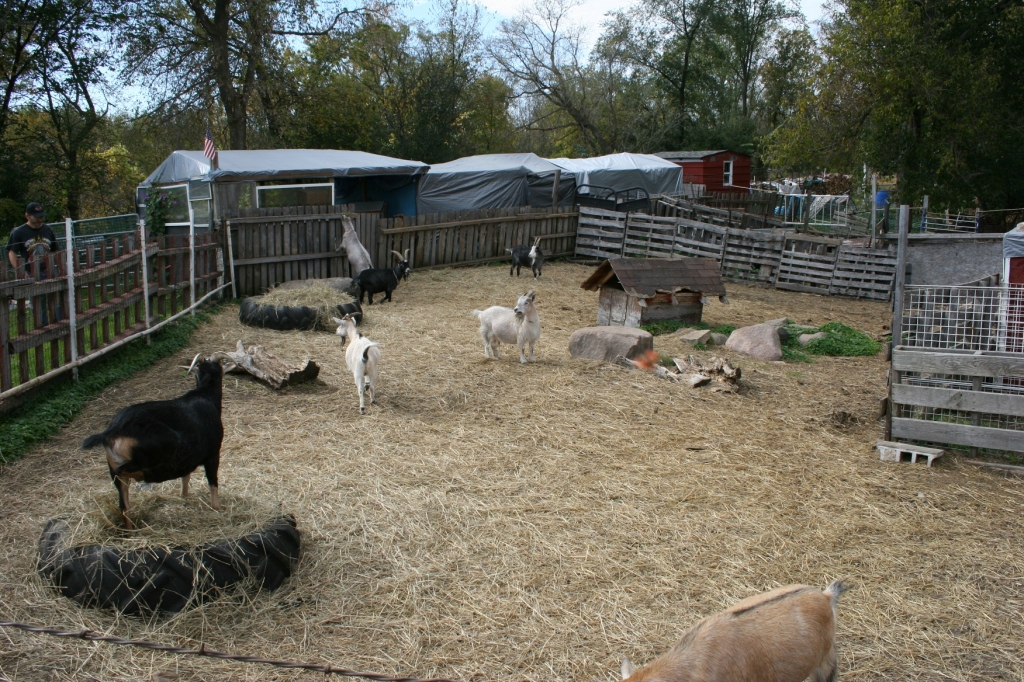 The goats have plenty of space to roam at the Kasota Zoo.

Toss in rocks and old tires, a bunch of shacks (some covered with tarps) and a few American flags and you have, by far, the strangest, weirdest, oddest, most unusual zoo I have ever visited.

I really question whether this even qualifies as a zoo given I paid no admission and saw no pathways that would take me beyond standing next to the fence watching the goats.

That’s when zookeeper Eugene joined me. I have no idea where he appeared from, but, all of a sudden, there he was. His co-zookeeper, girlfriend Patty, was hunkered down in a lawn chair on the zoo driveway.

I didn’t learn too much from Eugene. He’s not the most talkative fellow. But you can tell he genuinely cares for these goats, which are rotund enough to have eaten a troll or two. His zoo has been here 30-plus years, he says.

He grew up with goats; his dad had milk goats.

But Eugene and Patty raise and care for pygmy goats, which they’ll sell to anyone who wants one.

“Do you have names for all of them?” I ask Eugene.

“That one’s Number 8,” he says, pointing, while I struggle to keep from laughing that a goat would be named Number 8.

But then he picks out Spot and Chucky. That’s more like it, I think—name-names for these inquisitive creatures that have scooted up to the fence to see me.

Eugene and Patty have named all their goats, although I can't tell you the name of this one.

I don’t spend much more time at the Kasota Zoo, just enough for Eugene to tell me that he has a visual impairment and that Patty is legally blind.

Eugene, the zookeeper at the Kasota Zoo, wears thick glasses, but still struggles to see.

I don’t mention a word about trolls to these zookeepers. Not a single word.

Exploring the Kasota Prairie on an October afternoon October 7, 2010

A rock juts into the Kasota Prairie.

I CAN HEAR, in the distance, the steady thrum of traffic, presumably from U.S. Highway 169 or perhaps from nearby Minnesota Highway 22. I’m uncertain because I’ve never been here before and I haven’t consulted a map to pinpoint my location.

If not for the endless drone, I could be standing in the middle of a remote South Dakota or western Minnesota prairie.

But I am in south central Minnesota, at the Kasota Prairie, on a 90-acre remnant of the prairie land which comprised one-third of our state before 1850. Here native prairie grasses remain and grazed lands have been restored.

A view from the parking lot with a stone wall framing the prairie.

On a Friday afternoon, my husband and I discover this scenic spot in the Minnesota River valley two miles from Kasota. Because I favor the sweeping, wide open spaces of the prairie, the place of my roots, to the cramped confines of wooded land, I am comfortably at home here.

Prairie meets sky at Kasota. Stems of grasses dried to the muted earthen shades of autumn sway in the wind, mingling with the wildflowers and the berries I can’t always identify.

Occasionally a block of ancient rock juts through the soil, breaking the vista of plant life.

I pause often along the walking trails, even stray from the trampled paths, to examine the mottled stone, to admire a lone, rock-encircled barren tree atop a hill, to identify the red berries of wild roses, to study a clutch of feathers left by a predator, to take in the distant hillside of trees tinted in autumn colors.

My favorite image from the Kasota Prairie, a barren tree encircled in rock. 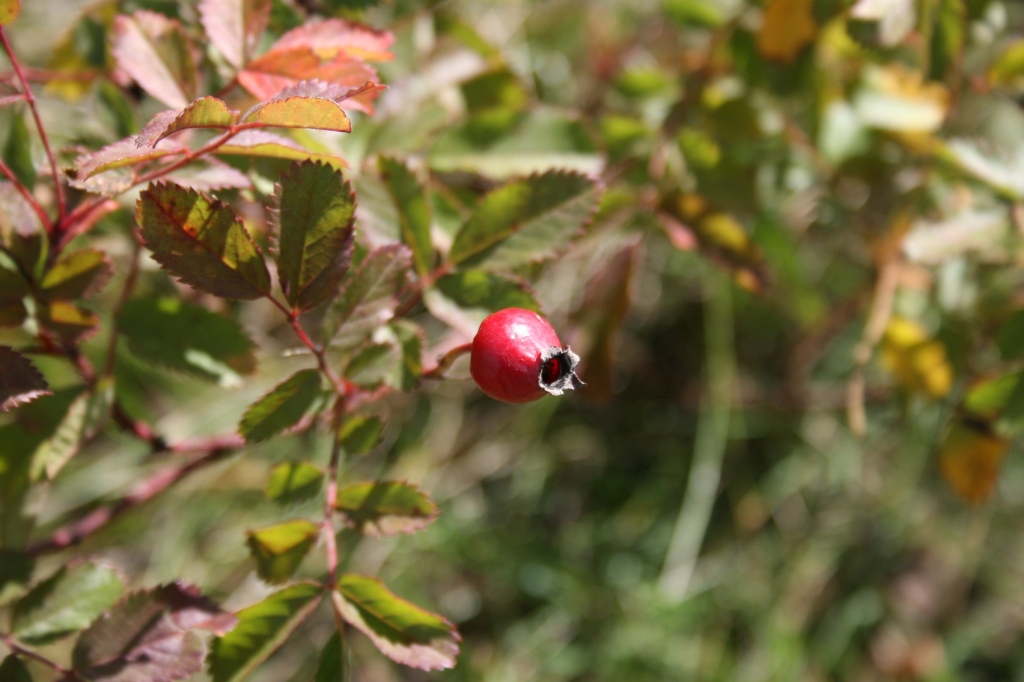 Trees on a distant hillside change colors under October skies.

There is so much to appreciate here. Wind. The sky, quickly changing from azure blue wisped with white to the angry gray clouds of a cold front. Land, rolling out before me, unbroken except for sporadic pockets of water, the occasional tree or cluster of trees and those rocks, those hard, ancient rocks that interrupt this land, this Kasota Prairie. 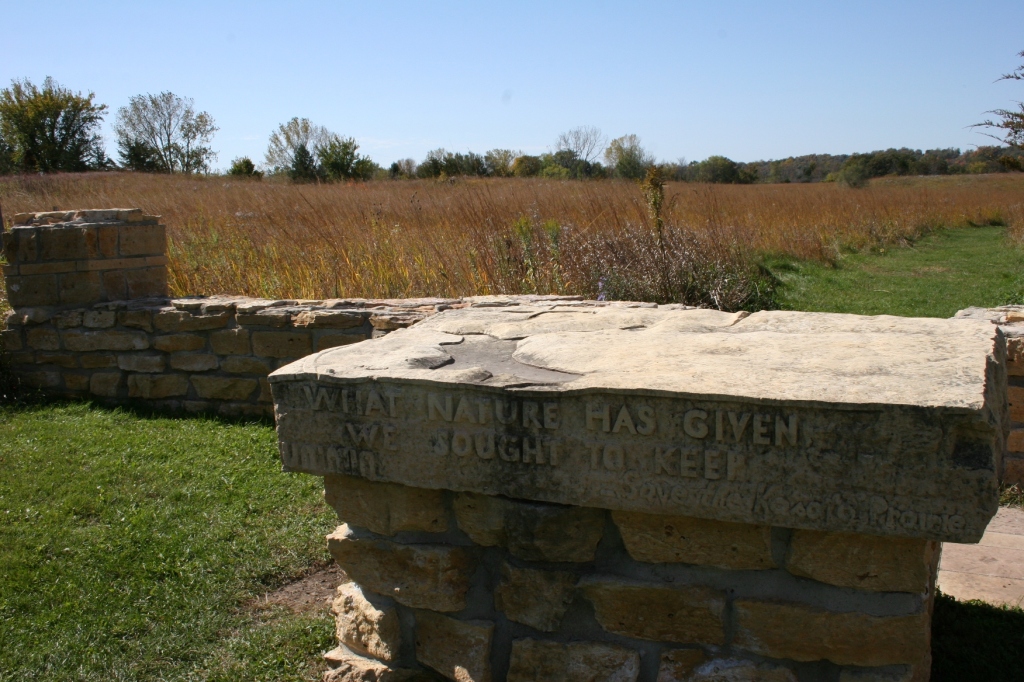 To truly appreciate the prairie, notice the details, like the berries growing among the grasses. 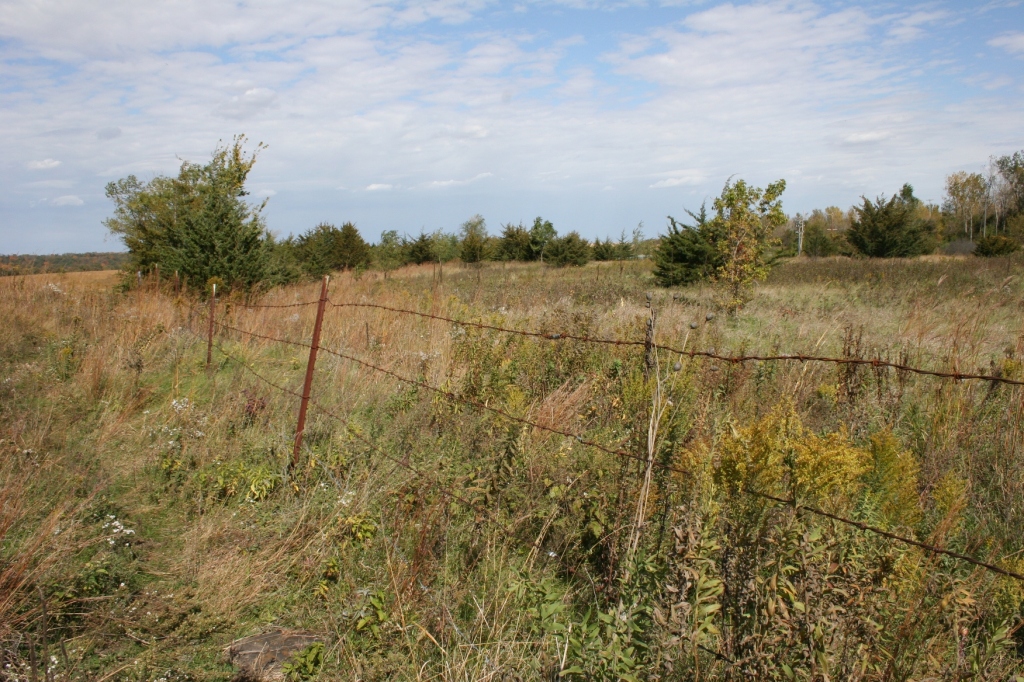 A narrow path runs along the barbed wire fence border line of the prairie.

FYI: To find the Kasota Prairie, take Le Sueur County Road 21 one mile south of Kasota. Then turn west onto township road 140 and go one mile.