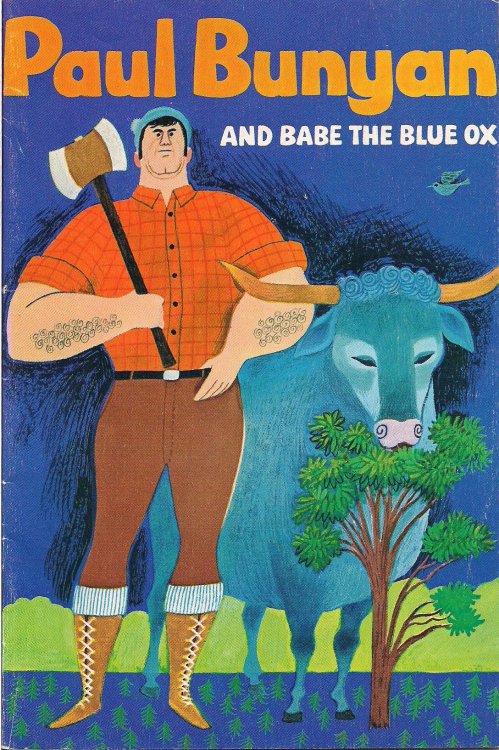 I purchased this vintage 1960s mini book, published by BANG Printing of Brainerd, at a used book sale.

IN MINNESOTA, PERHAPS no other legend perpetuates as much as that of Paul Bunyan and Babe the Blue Ox.

Photographed outside a hardware store in Pequot Lakes.

The larger-than-life pair fits the image we present of hardiness and strength, of surviving, and thriving, in a cold and snowy land. Paul cleared woods in one swell swoop of his axe. Babe imprinted our soil with depressions soon filled with water in the Land of 10,000 Lakes. 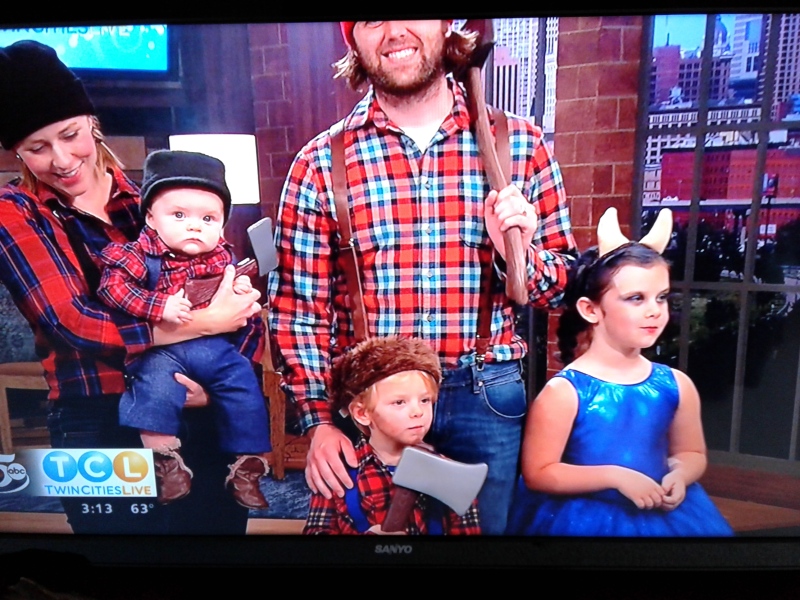 “The Paul Bunyan Family” with Babe the Blue Ox suggested as a Halloween costume on a recent edition of Twin Cities Live.

Dressed in our buffalo plaid flannel shirts—and I’m wearing one right now while typing this post—we embrace our identity as practical people. We don our flannels and our snow boots, fish on frozen lakes, shovel snow and long for summer, although we’re not going to tell you that.

Many northern Minnesota businesses tap into the Paul Bunyan legend as indicated in this sign photographed in Pine River.

We are of stolid, hardworking immigrant stock—of farmers who broke virgin sod, of lumberjacks who felled trees, of families who fled refugee camps and war torn countries, of men and women and children who decided Minnesota offered a place to fulfill our dreams.

We showcase Paul and Babe as legendary celebrities not because we’re trying to boast—we are mostly a modest bunch—but because we realize the value of these two. The pair reflects us, markets Minnesota, promotes tourism, boosts local economies, especially in the Brainerd Lakes area and to the north in Bemidji. Both communities feature oversized statues of Paul and Babe.

Paul Bunyan and Babe stand next to the iconic Brainerd water tower in this sculpture on a downtown Brainerd street corner.

Throughout the Minnesota northwoods and lakes region, the lumberjack and the ox show up in roadside attractions, in business and state trail names, in art and more. They symbolize the Minnesota spirit of strength and of creativity. We are a place of artists and wordsmiths, of hardworking men and women unafraid of getting our hands dirty, of determined entrepreneurs, of business leaders, of educators, of young people forging their paths into the woods of life…

We are individuals crafting our lives in a land that has, for generations, valued the legend of Paul Bunyan and Babe the Blue Ox as part of our Minnesota story.

Part II from Hackensack: My observations of this northwoods Minnesota town October 10, 2017

IN THE HEART OF NORTHWOODS MINNESOTA, in the land of legends and lake cabins, sits a village of some 300 folks. Hackensack. Twice I’ve been here, twice photographing Paul Bunyan’s sweetheart, Lucette, who resides along the shores of Birch Lake, and once picnicking along that same lake.

I’ve never explored this town much except with my camera. But simple observations through a viewfinder can reveal a lot about a place. In Hackensack, I see a hardy northwoods character, a laid-back attitude and a welcoming spirit. 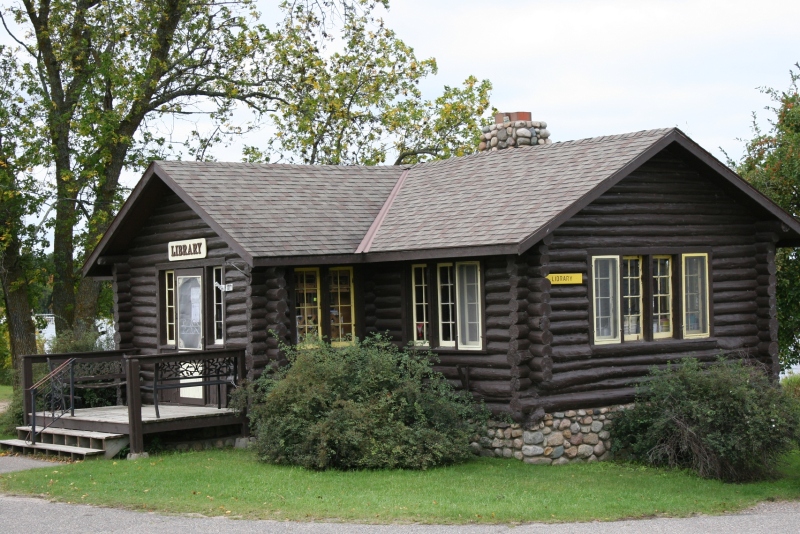 The lovely log cabin library right next to Lucette is run by volunteers.

I would love to sample food from the seasonal Butts & Buns BBQ.

That rugged character shows in log cabin style construction from lake homes to food truck and in the chainsaw carved wood sculptures around town.

This seems like my kind of kicked back place where I’d feel comfortably at home in buffalo plaid flannel and jeans. Kids biking along a narrow street with tackle box, fishing poles, bait and net in hand confirm my assessment of a town that appears Mayberry timeless.

Lucette is a tourist attraction.

Embracing the legend of Lucette at a local eatery.

Yet, there’s a definite awareness of tourism, of welcoming the temporary residents who arrive here in the spring to open their lake cabins for weekend get-aways, summer vacations and final autumn visits. 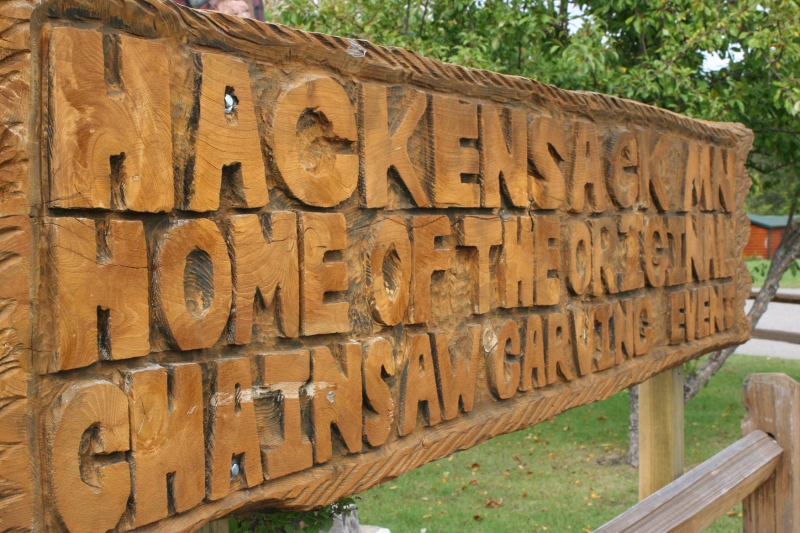 My quick visual perusal of Hackensack certainly doesn’t tell the entire story. But it gives a glimpse of a place appreciated by those who live here. And appreciated, too, by the people who come here to experience the legends, the arts, the food, the sense of place that is so northwoods Minnesota. 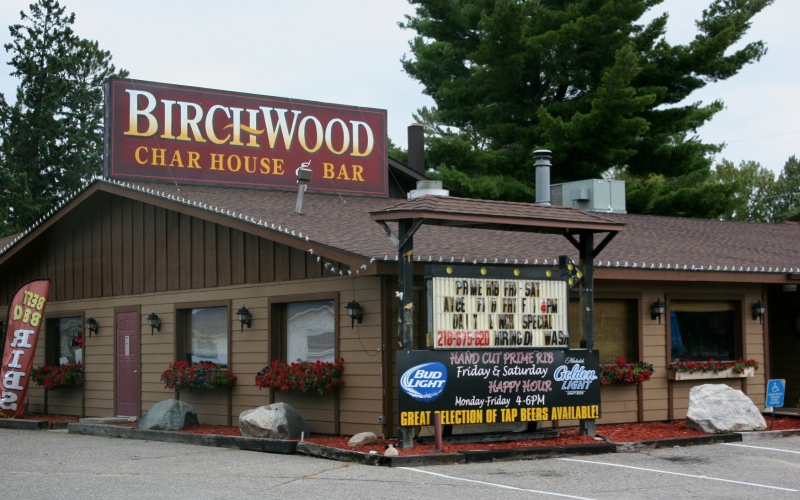 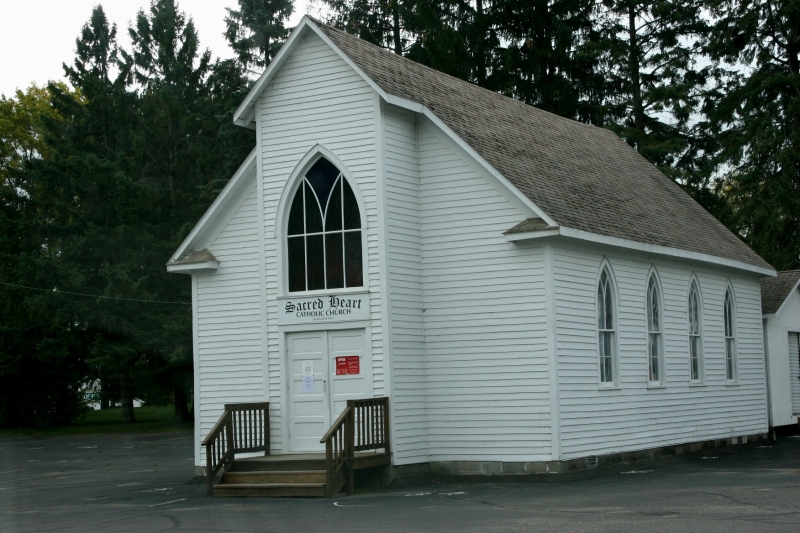 TELL ME: If you’ve been to Hackensack, or live or vacation here, how would you describe this community? What should I know about Hackensack?

Only in Minnesota: Babe the Blue Ox tops the news following a severe storm August 4, 2016

NOT EVEN THE STRENGTH of an ox could match the power of Mother Nature during severe thunderstorms that rolled through the Brainerd Lakes area of Central Minnesota Thursday morning.

At Paul Bunyan Land along State Highway 18 east of Brainerd, strong winds toppled a 6,000-pound iconic Babe the Blue Ox statue. The 18-foot tall by 24-foot wide ox is “a little dinged up, but in true Paul Bunyan fashion, back up on his feet in no time,” according to an entry on the attraction’s Facebook page.

Photo by Adam Rademacher and courtesy of Paul Bunyan Land.

Babe suffered a few injuries, including to his rear flank. Photo by Adam Rademacher and courtesy of Paul Bunyan Land. 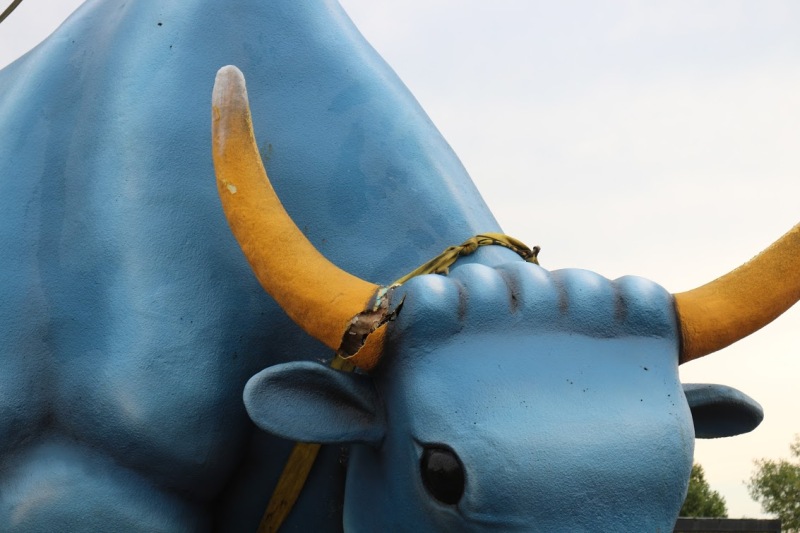 Babe, back on his feet. Photo by Adam Rademacher and courtesy of Paul Bunyan Land.

If you’re from Minnesota or you’ve ever vacationed in the Brainerd Lakes area, you understand the importance of Babe the Blue Ox. He, along with his owner, lumberjack Paul Bunyan, are the stuff of Northwoods legend. Since the early 1950s, statues of the pair welcomed visitors to the Paul Bunyan Amusement Center near Baxter. Parents slipped their children’s names to the ticket taker and soon Paul was personally greeting Johnny or Jane from Wherever. Such is the stuff of summer childhood memories in Minnesota.

In 2003, the long-time tourist attraction closed and Paul and Babe moved to their new home next to This Old Farm Pioneer Village east of Brainerd. This morning, Babe proved his resiliency in adversity. Paul Bunyan Land opened at 10 a.m. Thursday, right on schedule. 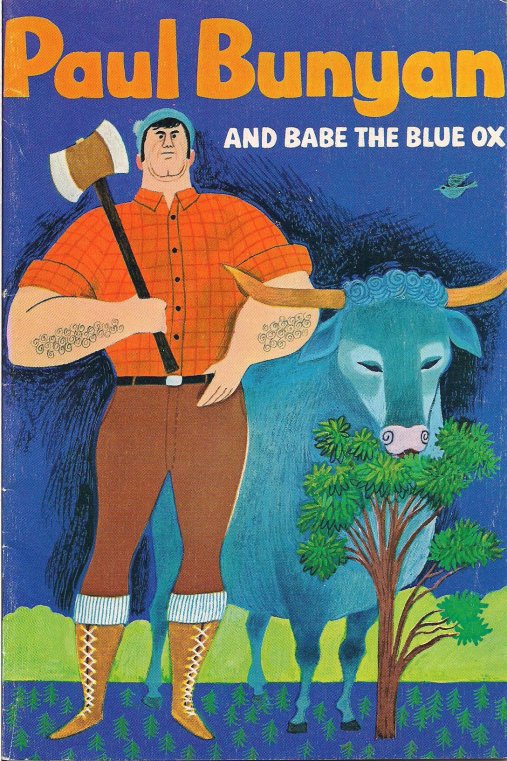 Several months ago I purchased Paul Bunyan and Babe the Blue Ox, a slim book (more like a pamphlet) at a used book sale in Faribault. Published by Bang Printing of Brainerd, likely in the 1960s, this book was written by Daphne Hogstrom and illustrated by Art Seiden. I acquired it for the art more than the story. I value such period graphics, especially this publication about a Minnesota legend.

According to the author, Babe the Blue Ox is as wide as the Mississippi River, stands 11 pine trees tall, does the work of 60 men and can pull rivers.

Legend goes and this writer writes, that Paul pulled Babe from a snowdrift in the year of the blue snow, thus the hue of this much beloved ox.

FYI: Click here to view the full gallery of storm damage images. All photos are courtesy of the Rademacher family and available for the public to use, according to the Paul Bunyan Land FB page. Note that Thursday’s storm caused severe damage throughout the Brainerd Lakes area with trees and power lines down. Damage reports are still coming in. This storm, and specifically the toppling of Babe the Blue Ox, is leading Minnesota news stories today.