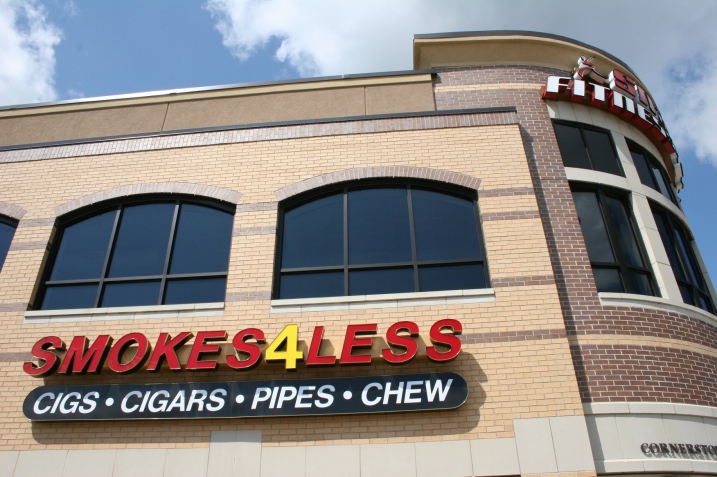 ON A RECENT STOP for a treat at the Dairy Queen in downtown Hutchinson, I noticed this impressive new Cornerstone Commons retail and professional office center. Beautiful building.

But I was struck by the irony of two businesses located here, SMOKES4LESS and Snap Fitness. Say again. Yes, polar opposites housed in the same complex at 114 Main Street North.

But if you’re like me and you’re passing through town and you get out of your vehicle, consume a Blizzard and then hop back in your vehicle, then the guilt factor may kick in.

Hey, but at least I don’t smoke or chew.

WARNING: Smoking during pregnancy can harm your baby.

WARNING: Smoking can kill you.

I didn't need to search long or hard to find these cigarette butts. Two were tossed into one of my flowerbeds by a neighbor. I found the third in the street by my house.

Just as Minnesota legislators are considering proposed changes to the state’s Freedom to Breathe law, the U.S. Food and Drug Administration is finalizing plans to modify warnings on cigarette packaging and advertising.

Following requirements of The Family Smoking Prevention and Tobacco Control Act, the FDA has proposed that cigarette packaging and ads bear one of the above nine warnings along with a matching colorful graphic.

The shock value of the proposed graphics—like a toe-tagged corpse and a mother blowing smoke into her baby’s face—are an effort to make a powerful impact on the smoking public. Enough to make a smoker stop smoking.

The final graphics will be selected by June 22 and the warnings must be in place on all cigarette packages sold in the U.S. and in cigarette ads by October 2012.

As a nonsmoker, I’m all for this move to prevent, reduce or stop smoking.

However, I don’t support proposed legislation in Minnesota that would once again allow smoking in bars under specific conditions. Not that I frequent bars, but bars and restaurants are often interconnected, so this matters to me.

The plan basically would allow smoking in bars if a ventilation system is installed to remove the smoke. In bars connected to restaurants, the bar must be walled off with a door separating the bar and restaurant.

Come on. A door will not keep smoke from filtering into a restaurant. And I don’t know about you, but I don’t need smoke served with my meal.

I make no apologies for my strong stand against smoking and my intense dislike of cigarette smoke.

I’m also honest enough to admit that, in my youth, I tried tobacco products on several occasions, enough to realize smoking wasn’t for me.

My dad became addicted to cigarettes when he was in the military, serving on the front lines during the Korean Conflict. He preferred Camel cigarettes. Sometimes he also rolled his own.

My dad, a smoker for many years, first exposed me to cigarettes. Once he even let me puff on his Camel. Now before you start calling him an irresponsible parent, consider this.  He knew I’d cough and sputter and spit and never want to touch a cigarette again. He was right. Eventually he gave up smoking but never quit chewing snuff.

Although I never took up smoking, I was addicted to candy cigarettes as a kid. But candy cigarettes were as popular as Bazooka bubble gum back in the 1960s and no one thought anything of subtly encouraging kids to smoke via those chalky white sticks with the red tips.

As for the few Swisher cigars I smoked in my mid-20s, I offer no excuse except my ignorant, youthful stupidity. I bet many smokers who are now habitual tobacco users wish they’d never started.

If you’re a smoker and want to smoke in the privacy of your home, then go ahead. Just don’t invite me over because, physically, I can’t tolerate cigarette smoke.  I’ve had numerous bad experiences with cigarette smoke.

Back in the early 1980s, I worked for a southern Minnesota daily newspaper that allowed smoking in the office. I came home every night smelling like I’d been in a bar all day. My clothes reeked. My skin reeked. My hair reeked. I remember complaining, with several other nonsmokers in the office, about the smoking. Nothing changed, because the news editor smoked. She didn’t care. So what if the copy editor sat outside the conference room during the weekly staff meeting because he couldn’t tolerate the smoke? I wish I had joined him instead of breathing the toxic air. So what if the news editor should have been more considerate given the Minnesota Clean Indoor Air Act passed in 1975? None of that mattered.

My other notable smoke experience also involves a hotel, this one at a southwestern Minnesota casino. I was there attending a cousin’s wedding reception. Although the hotel room my family booked was supposedly smoke-free, the odor of cigarette smoke filtered from the smoke-filled hotel lobby, halls and casino into our room. I barely slept that night because of the tightness in my chest caused by the smoke.

So, Minnesota legislators, listen up. Listen to representatives of The American Cancer Society, the American Heart Association, the American Lung Association and Clearway Minnesota, all of whom have been at the State Capitol opposing the proposed changes to Minnesota’s Freedom to Breathe Act.

Consider the 83.9 percent of adult Minnesotans (according to results of the 2010 Minnesota Adult Tobacco Survey) who do not smoke. Please keep our Freedom to Breathe Act intact and smoke-free.