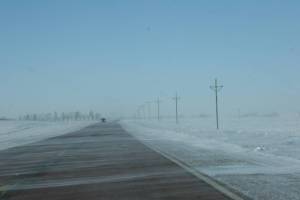 Minnesota Highway 30, which we drove last Friday, is closed today due to white-out conditions. When this photo was shot a week ago, snow was blowing and drifting across the highway.

TRAVELING LAST WEEK through Watonwan, Cottonwood and Redwood counties was enough to jog my memory of just how brutal winters can be on the southwestern Minnesota prairie where I grew up.

Fierce winds whip snow across open fields and across roadways, hardening into glacial-like ridges. I was thankful last Friday that snow wasn’t falling too as we were driving Minnesota Highways 60 and 30, or we would have been in trouble. You don’t want to find yourself in the middle of nowhere, in white-out conditions, in temperatures that are in the sub-zero range.

That was a week ago.

Today, a dangerous winter storm rages across the southwestern corner of Minnesota. Nearly every roadway, including the interstate, is closed and snowplows have been pulled off the roads.

Winds are pushing the feather-light snow onto highways and county roads, forming rock-hard drifts that make travel impossible. Semis and cars are stuck, stopped right there in traffic lanes, trapped in impassable snowdrifts.

This is the reality of wind and snow on the Minnesota prairie.

The southwestern Minnesota prairie, in the summer, is a place of remarkable beauty. I took this photo several years ago near Walnut Grove, the childhood home of author Laura Ingalls Wilder.

A Lutheran perspective on the 12 days of Christmas

The glass on the left is correctly printed with a pied piper on the 11th day of Christmas. The other glass, however, places a piper on the 10th day instead of a leaping lord. 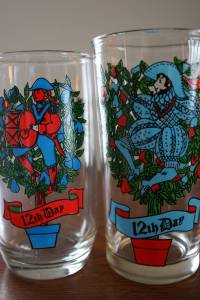 A drummer is accurately printed on the 12th day of Christmas glass on the left. The glass on the right incorrectly showcases a leaping lord.

YESTERDAY WOULD HAVE been the time to write a post about Epiphany, the day the wise men brought gifts of gold and frankincense and myrrh to the baby Jesus. But I got sidetracked by other topics and writing book reviews for Minnesota Moments magazine, including a review of Garrison Keillor’s Life among the Lutherans.

That reminds me of Sunday morning, when I was sitting in Trinity Lutheran Church listening to the sermon, which started with something like “This is the 10th day of Christmas, you know, 10 lords a leaping.”

Now that statement got me sidetracked right away as my mind momentarily diverted to the 12 days of Christmas glasses stashed in my kitchen cupboard and in three boxes somewhere in my home.

I’m sorry, Pastor Kinne, but I wondered at that moment what type of artwork graces the 10th day glass in my collection. I looked this morning, expecting to see a lord a leaping. Instead, there stood a stately man blowing on a musical instrument, which I can’t identify because I don’t know my musical instruments. But this image still didn’t seem right to me.

So I further examined the 10th day glass, did a bit of googling and discovered, horror of horrors, a mistake. The 10th glass in my collection reads: “The tenth day of Christmas my true love sent to me ten pipers piping.” According to several websites and Pastor Kinne, it should be10 lords a leaping. The leaping lords are on my 12th glass, which should have 12 drummers drumming. But a drummer graces the ninth glass, which should be nine ladies dancing. What a mixed up mess.

But back to that sermon. My thoughts then meandered to my good fortune in finding 12 days of Christmas glasses for my three kids, who were already arguing over who would get my collection some day. I never realized they cared so much about holiday glasses that I received 30-plus years ago from Al Egesdahl of Egesdahl Funeral Home and Furniture Store in Gaylord.

One holiday season, Al marched across the street to The Gaylord Hub, where I worked as a newspaper reporter and photographer, and plopped down a cardboard box crammed with those dozen 12 days of Christmas glasses. I’m not sure why Al gave me those glasses. Maybe he was just being a good neighbor. Minnesota Nice. Or maybe, now that I know the truth, he was simply trying to dump misprinted holiday glasses on an unsuspecting 22-year-old.

That doesn’t matter really as these glasses became a family treasure. Eventually, each of my kids acquired 12 days of Christmas glasses. Miranda found hers first at a garage sale. Last year I discovered a set for Amber at a Faribault antique store that was going out of business. And then, this past summer, I bought the final set for $2 at a garage sale. Guess what my son got for Christmas?

All of this I was thinking as the Lutheran pastor talked about Epiphany and how the wise men’s gifts connect to Christ’s three roles as prophet, priest and king. As a prophet, Christ foretold of his death, represented by myrrh, an embalming fluid. Frankincense tied in with Jesus’ duty as a priest, a mediator between God and us, making the ultimate sacrifice for our atonement.  And, finally, the gold, obviously, relates to his position as a king, ruler over all.

Considering the thousands of sermons I’ve listened to through the years, I’m surprised I had never heard this explanation. Or maybe, just maybe, my mind had wandered to 10 lords a leaping. Or was it 10 pipers piping?

DID YOU KNOW THAT in Latin American cultures, kids get the bulk of their Christmas gifts on January 6, Epiphany, rather than on Christmas?

It’s true, as my daughter Miranda discovered last year while living in Argentina.

On the night of January 5, kids leave water and grass outside for the camels. The next morning the food and drink have disappeared, replaced by presents. Children believe that wise men come on camels bearing gifts for Dia de los reyes, Three Kings Day, the 12th day of Christmas, Epiphany.

Now I like that custom, which is certainly more biblical than our Santa Claus. It keeps the focus on the true meaning of Christmas, the birth of Christ.

But I wonder. Could we possibly convince all those good Lutheran Sunday School students that camels would trek across the snow to deliver gifts? And where, exactly, would snowbound Minnesota kids find grass for the camels in January?