IF YOU VISIT the Fargo-Moorhead Sertoma Club website, you will read this:

Sertoma stands for the high and noble service to mankind through communication of thoughts, ideas and concepts to accelerate human progress in health, education, freedom and democracy.

Then, if you visit Fargo’s largest park, Lindenwood Park, around the Fourth of July or on Labor Day, September 11, Armed Forces Day, Memorial Day or Flag Day, you’ll see evidence of that mission. Some 75 American flags line Roger Maris Drive as part of the Sertoma Flag Service project.

I saw the impressive display of flags when I was in Lindenwood on June 14, Flag Day. 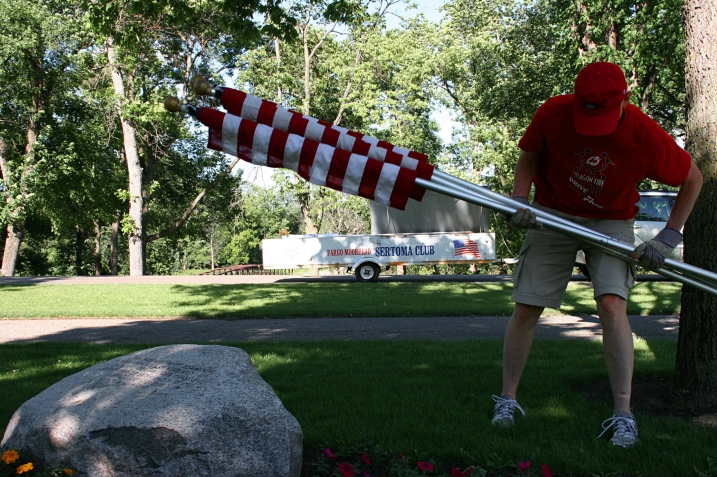 Volunteer Bruce Hanson gathers the flags, which typically are posted for several days on holidays and memorable historic occasions.

There I chatted briefly with Sertoman Bruce Hanson as he carried carefully rolled flags from the park grounds and placed them into a Sertoma trailer. The project, he says, has been ongoing in the city for a long time (since 1973, according to the website) and was moved to Lindenwood several years ago. Prior to that, the flags were scattered at businesses throughout Fargo and West Fargo. Grouping all the flags in one place makes more of an impact.

Businesses are still involved, Hanson says, via flag placement sponsorships. Proceeds from the flag project go back to the community.

The Sertoma Freedom Bridge over the Red River, linking Fargo and Moorhead.

I didn’t ask Hanson about the other Sertoma project I noticed in the park, the Sertoma Freedom Bridge, a foot-bridge which links Lindenwood Park on the North Dakota side of the Red River with Gooseberry Mound Park on the Moorhead side. 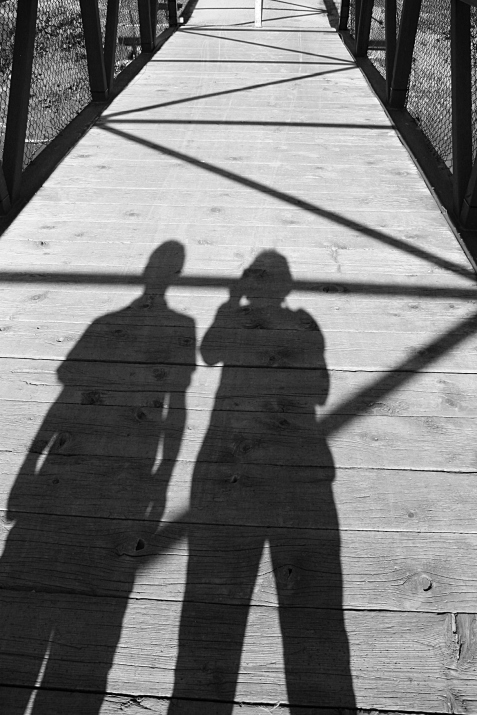 I photographed my shadow and that of my 18-year-old son on this popular biking and walking bridge.

The bridge closes July 9 for reconstruction and reopens October 1. I did a brief online search and learned that this bridge has been battered more than a few times by the raging floodwaters of the Red River. That was difficult to imagine given the docile nature of the narrow and muddy Red on the June evening I visited Lindenwood Park.

But I was assured by a man and his granddaughter that the river most assuredly spills from its banks and floods the lower park areas.

I’d really like to know more about the history of this pedestrian and bike bridge. When was it built? And why is it pegged “Freedom Bridge?” 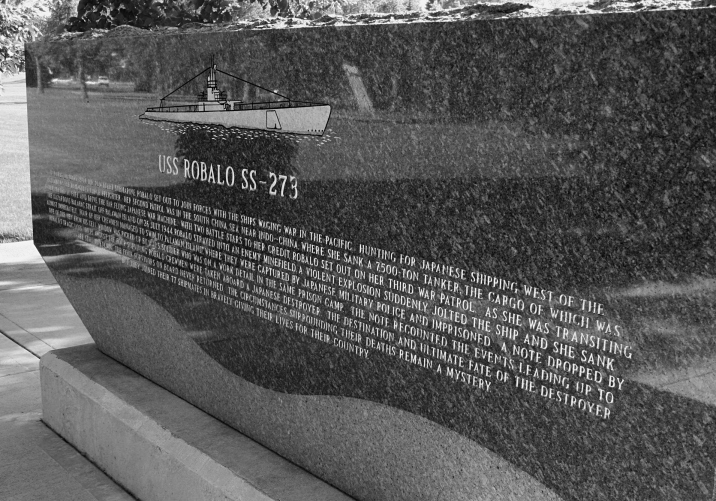 You’ll also find this symbol of freedom in Lindenwood Park. This memorial honors the 81 men who lost their lives on the WW II American submarine, the USS Rabalo. Four survived but died as Japanese prisoners of war after the submarine hit a minefield and sunk while passing through the Balabac Strait. The submarine was assigned to North Dakota for establishment of a monument.

The Lindenwood Park monument to baseball player Roger Maris, who was born in Hibbing, Minnesota, but grew up in Fargo. This New York Yankees’ outfielder set a new major baseball league record in 1961 with 61 homeruns. That broke Babe Ruth’s record of 60. Maris was also a Most Valuable Player in the American League several times and played in seven World Series. Fargo is home to the Roger Maris Museum at the West Acres Shopping Center.

IN THE UNITED STATES OF AMERICA, we have much to be thankful for, most notably our freedom. Have a wonderful Fourth of July and enjoy these photos, my gift to you as we celebrate the birth of our great nation. 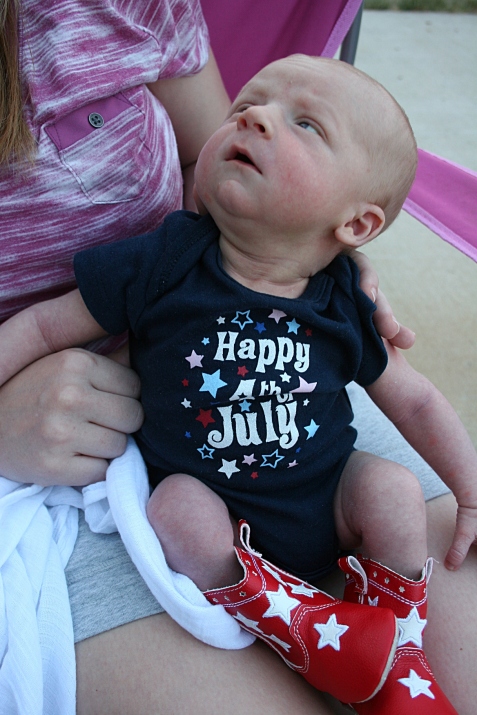 My great nephew Hank, born on June 20, is celebrating his first Fourth of July. 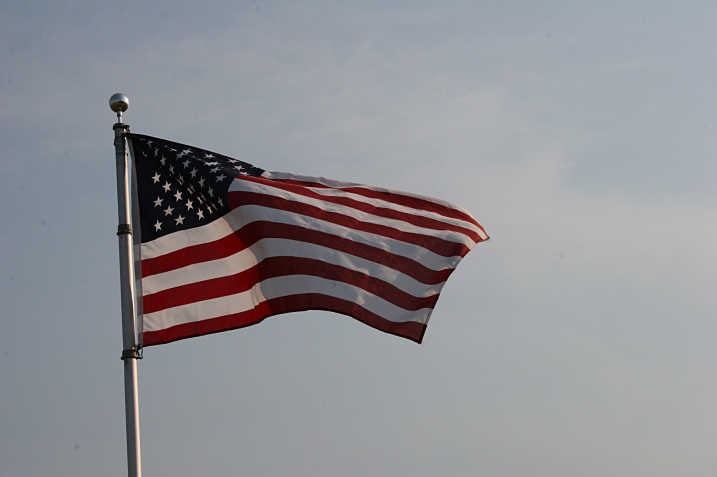 The flag which flies at the home of my middle brother.

Flags line the park area along Highway 169 through St. Peter.

One of my favorite patriotic songs, America the Beautiful.