SOMETIMES I NEED a reminder.

And in this year of the Minnesota winter which never ends, I’ve needed multiple reminders.

Wednesday morning, I received this note attached to a May Day treat bag deposited on my front steps:

This is the “May” that the Lord has made.

As I write, heavy snow is falling. Parts of Minnesota, including my area, are under a winter storm warming until 7 p.m. Thursday. The National Weather Service is predicting a “powerful winter storm” with snow accumulations of six to nine inches.

Happy first day of May!

But thanks to our friends, the Lerass family, this whole day has become brighter, more bearable, with that pointed message and a sweet homemade treat tucked inside an artfully decorated paper bag. To have such friends, reminding me that I should rejoice in whatever day I’ve been given, rates as a wonderful blessing.

Added to that May Day delight, my husband and I received an early wedding anniversary card from our future son-in-law’s parents. Another reason to smile on this dreary day, this May 1 which the Lord has made.

Apparently God has a sense of humor.

A few days ago He blessed me with daffodils and sunshine, a redemption, I suppose, for the snowfall to come.

UPDATE 6:59 P.M.: Since publishing this post late this afternoon, my doorbell rang for the second time today. I opened it to find another May basket, this one from the Weeg family. My friends clearly know that I love chocolate and the color green. (Right, Billie Jo?) How blessed I am to have such thoughtful friends.

Weather-wise, snow continues to fall, as shown in these two photos just taken from my bedroom window. No taking the camera outside during snowfall.

Happy May Day, everyone. 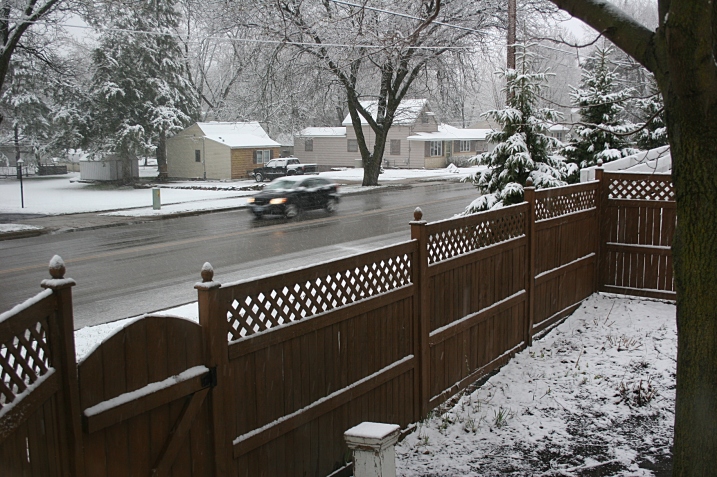 My backyard in the foreground with Willow Street and my neighborhood beyond. 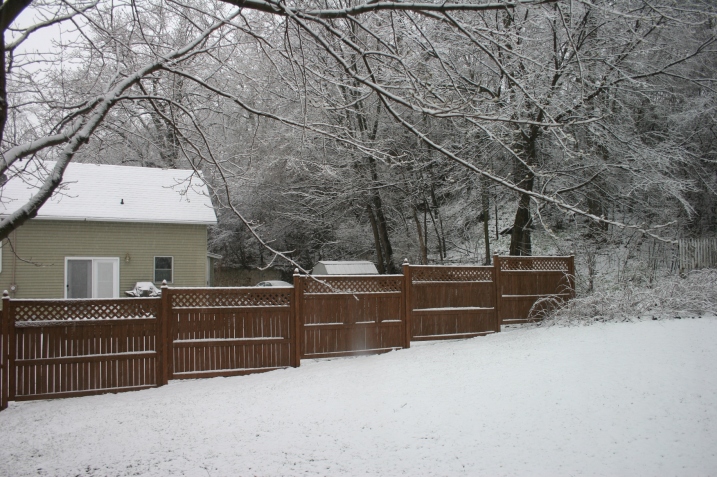 When I showed you my backyard a few days ago, it was snow-free. Not so this evening.

An evening with Minnesota poet Todd Boss in Owatonna

HE READS WITH THE CADENCE of a seasoned poet, with the ease of familiarity, written words fitting his voice like a comfortable pair of boots.

Which is exactly what award-winning St. Paul poet Todd Boss sported, along with faded jeans and a long-sleeved plaid shirt, to a “Poets at the Library Tour” event Tuesday evening at the Owatonna Public Library.

Casual, laid back and unpretentious, Boss settled in to read from his poetry books, Yellowrocket and Pitch, Minnesota Book Award finalists in 2009 and 2013 respectively.

Before reading a poem set in Luckenbach, Texas, Boss shared that a woman from New York wants to include him in a dissertation she’s writing on cowboy poetry. He showed off his cowboy boots, then laughed. The audience laughed, too. While Boss often writes about his rural Wisconsin upbringing, he isn’t exactly a cowboy poet. Audience members agreed with Boss that Wisconsinites and Minnesotans live on farms, not ranches, defined by this poet as big open landscapes of earthy hues.

Later he referenced the New York perspective again: “My mother used to read a lot of poetry on the ranch.” Ranch. A carefully chosen word. Just like the words in his detailed and rhythm rich poems.

Boss read poetry about card playing, wood piles, his mother, an exchange with a check-out clerk at a Minneapolis food co-op, the 35W bridge collapse…

He revealed, too, that when he writes about his parents, he gives them the option of nixing those personal poems. They never have, a point audience members noted as respectful—of Boss in asking and of his parents in respecting his work.

Numerous audience members read their poetry prior to Boss’ reading. Some, like me, were honored at a “Meet and Greet the Poets” reception earlier for those published in Poetic Strokes 2013, A Regional Anthology of Poetry From Southeastern Minnesota. Southeastern Libraries Cooperating publishes the annual collection.

Boss is that kind of caring guy. After listening to audience members read poetry before his presentation, he thanked them, defining their readings as “a little bit like overhearing people’s prayers…things they’re worried about.”

He’s genuine and honest enough to admit that he doesn’t write every day, but that he should and that he’s sometimes lazy about writing.

And, yes, he actually earns a living writing poetry; touring the state and country reading poetry; collaborating on his grant-funded motionpoems; and, most recently, undertaking a public art project, an art/poetry installation on the five-year anniversary of the 35W bridge collapse.

He’s a farm boy from Wisconsin now living in the big city, but still strongly connected to his rural roots via his poetry.

If Tuesday’s event had been held at a ranch, instead of the third floor of a public library, audience members would have gathered around the campfire to hear Boss, cowboy boots resting on a chunk of wood, strumming his not-exactly-cowboy-poetry rhythmic poetry.