Guilty of escaping a Minnesota winter: In the conservatory with the camera… March 4, 2014 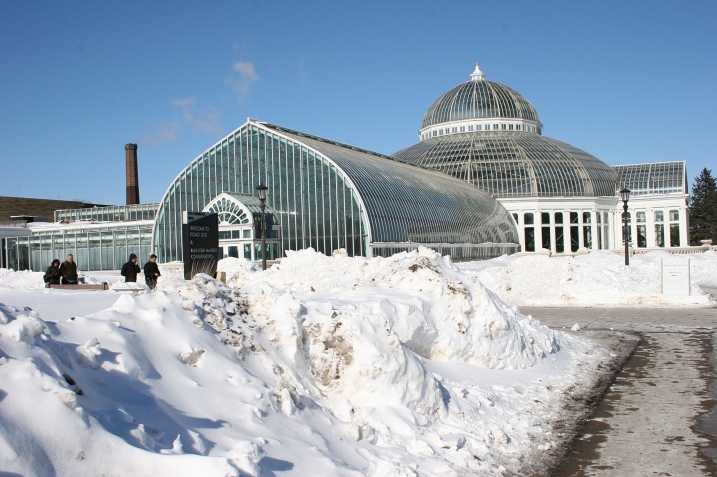 The Marjorie McNeely Conservatory in St. Paul on Sunday afternoon.

“SHE’S CRAZY,” the woman remarked to her companion, not realizing I overheard her as I photographed the exterior of the Como Park Zoo and Conservatory. 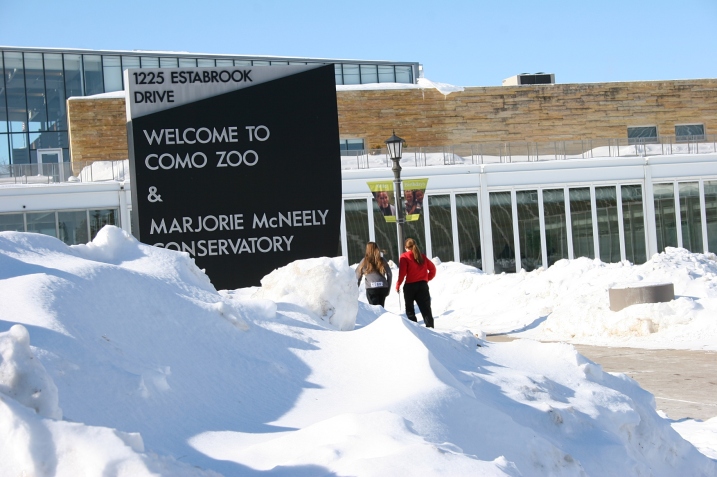 I wasn’t the only one racing from vehicle to the Como Park Zoo & Conservatory minus a winter coat.

The outdoor air temp hovered around five degrees Fahrenheit. Add in the windchill and the “feels like” temp likely plummeted to minus 25 degrees. And I was coatless.

Was I crazy? Perhaps. But stir craziness marked precisely the reason I came here on a sunny Sunday afternoon on the second day of March with my husband, eldest daughter and son-in-law. I needed a respite from the coldest Minnesota winter in 35 years. And I might add a particularly snowy one.

Looking up at the palm trees.

For a snippet of an afternoon, I pretended I was in the tropics, in a land of lush greenery and flowing rivers and blooming flowers.

Temps were downright hot inside the North Garden, the reason I left my coat in the car.

Not difficult to imagine in the 80-degree warmth of the North Garden,

I tucked my Canon inside my camera bag before entering the humid/misty/foggy Fern Room.

in the smothering humidity of the Fern Room

Lilies and other flowers perfumed the Sunken Garden.

or in the Sunken Garden scented by the blossoms of blooming flowers. 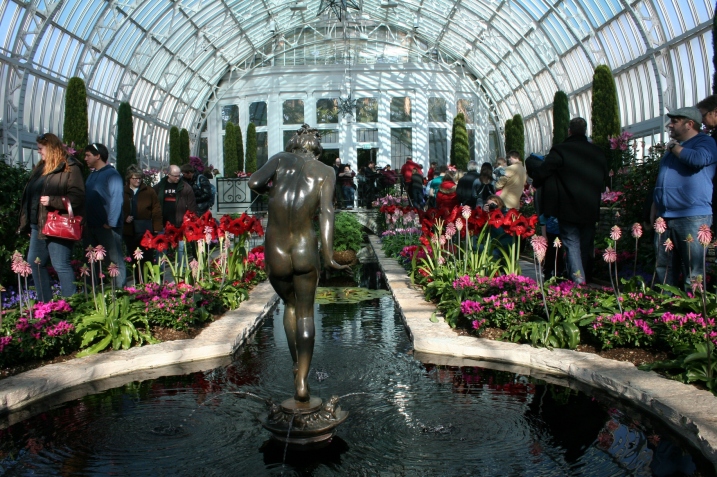 Lines of people streamed through the Sunken Garden, by far the most crowded space.

This was exactly what I needed, as did hundreds of others. Conservatory paths were packed with people meandering through the gardens, pausing to photograph flowers and/or simply basking in the warmth and beauty.

I can’t recall the name of this flower, but I paused to photograph it because I like its shape and sheen.

Crowded conditions were not conducive to creative photography as I had to move along lest I hold up others. But I managed.

An artist sketching in the Sunken Garden flipped his sketchbook back to reveal his favorite sketch of the day, that of a bonsai tree. His art is spectacular. My apologies for failing to ask his name.

Metro Sketchers, artists who monthly gather to create art at a chosen location, recorded the scenes unfolding before them.

Thomas Winterstein of St. Paul sketches a scene in the Palm Dome.

I chatted with a few, 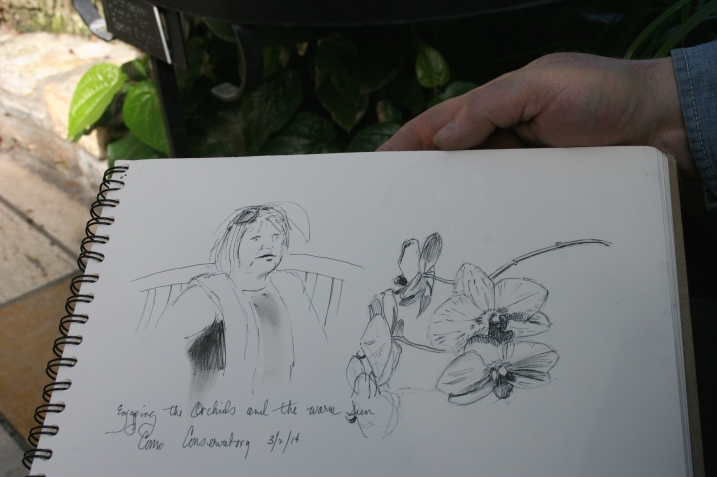 admired their art and their ability to create with paint and pencils and other mediums.

I wondered, too, if my California native son-in-law was at all impressed. After all, palm trees and other warm climate plants certainly aren’t foreign to him.

I have no idea what plant this is, but I love the leaves.

To this Minnesotan, though, the Marjorie McNeely Conservatory at Como Park in St. Paul proved impressive and mentally uplifting in this longest and coldest of Minnesota winters.

I managed a quick shot of my daughter and her husband in the Palm Dome, even though portraits are banned.

FYI: Just for the record, I left my coat in the daughter’s car as I did not want to carry it around in the Conservatory while also juggling a camera. The daughter was kind enough to drop Mom and Dad off at the sidewalk leading to the Conservatory. She and her husband then circled the parking areas for an incredibly long time before squeezing into a tight parking space. I’d advise driving a small vehicle here and not attempting to park in the unplowed gravel lot where vehicles were getting stuck.

Check back for more photos.

31 Responses to “Guilty of escaping a Minnesota winter: In the conservatory with the camera…”