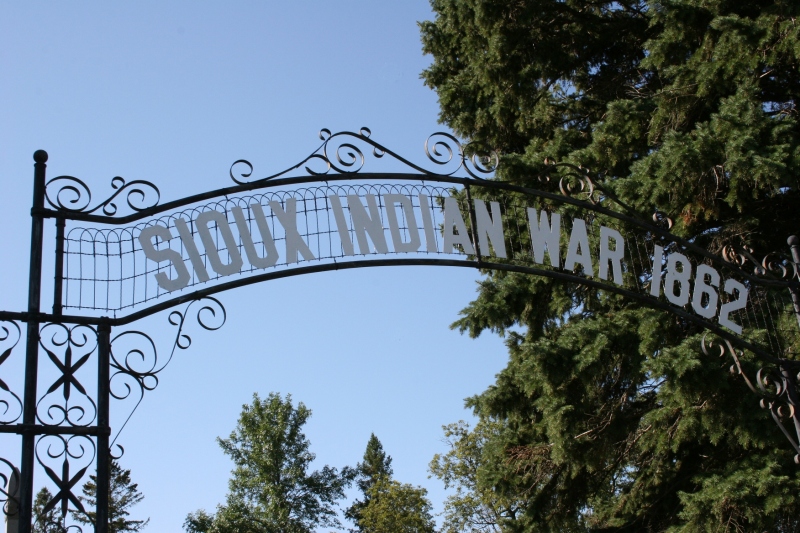 This archway leads to the Wood Lake State Monument, on the site of the battle which ended the US -Dakota Conflict of 1862. Minnesota Prairie Roots file photo 2012.

TUCKED INSIDE A CARDBOARD BOX among teenage journals, clippings of news stories I wrote, old greeting cards, my last childhood doll and more rest pages of history. History I gathered from books, summarized and typed on a manual typewriter into a document titled “The Sioux Uprising of 1862.” I wrote that term paper in ninth grade, or maybe as a sophomore. All these decades later, specifics elude me. 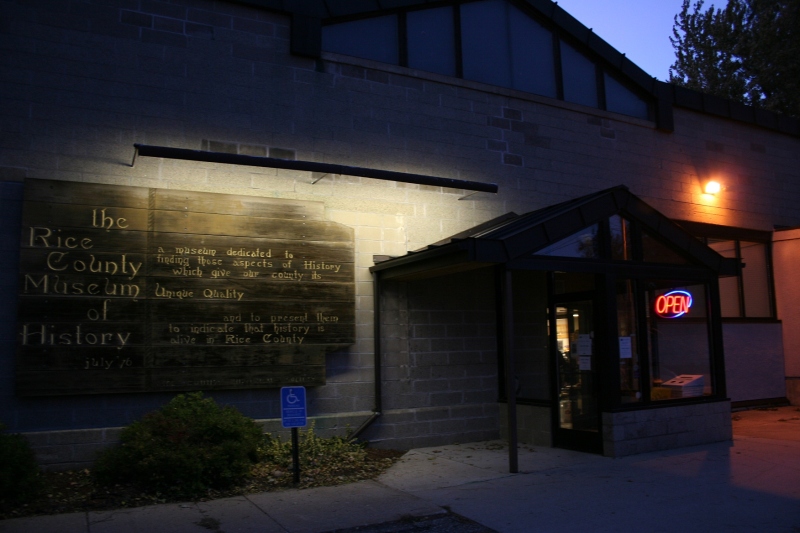 But my interest in this Conflict, centered in my home area of southwestern Minnesota, remains steadfast. Thursday evening the Uprising, more appropriately tagged today as The US – Dakota Conflict/War of 1862, focused a presentation by Tim Madigan at the Rice County Historical Society in Faribault. A history major, Madigan taught social studies back in the 1970s in Morton, near the epicenter of the Conflict. He is also a former Faribault city administrator. 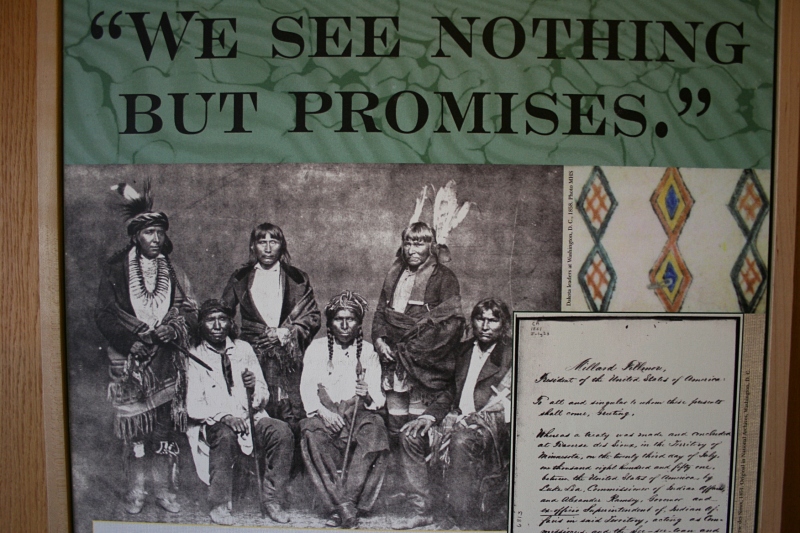 A photo panel at the Traverse des Sioux Treaty Center in St. Peter shows Dakota leaders photographed in Washington D.C. in 1858. The photo is from the Minnesota Historical Society.  The quote reflects the many broken treaties between the Dakota and the U.S. government. Minnesota Prairie Roots file photo 2013.

To a rapt audience of nearly 50 mostly history buffs, Madigan outlined basics of the war from its root causes—in delayed annuity payments, withholding of food and resulting starvation among the Dakota people—to information on battles and more. I hadn’t forgotten those basics. But considering them now as an adult rather than as a high school student completing an assignment opened new perspectives. Madigan made it clear that history, as written, includes not only facts, but also myths, lies and more depending on the source. His talk seemed appropriately titled “The Fog of War: Perceptions and Realities, US – Dakota Conflict 1862.” 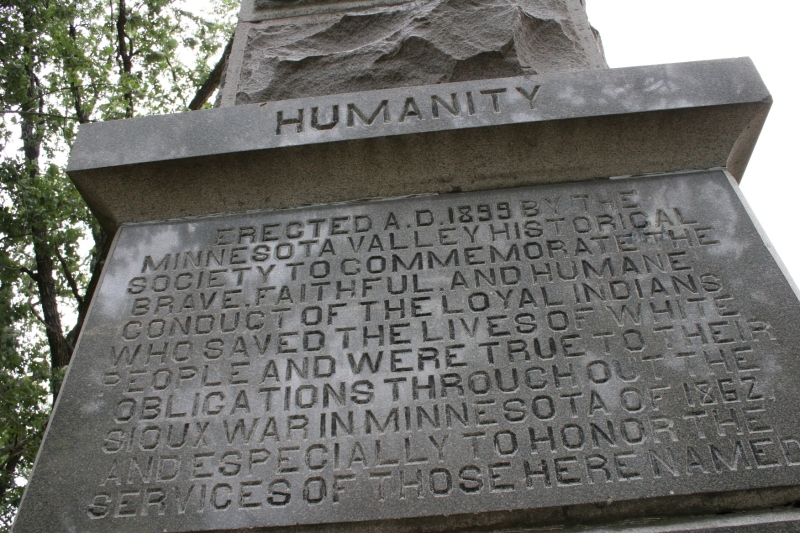 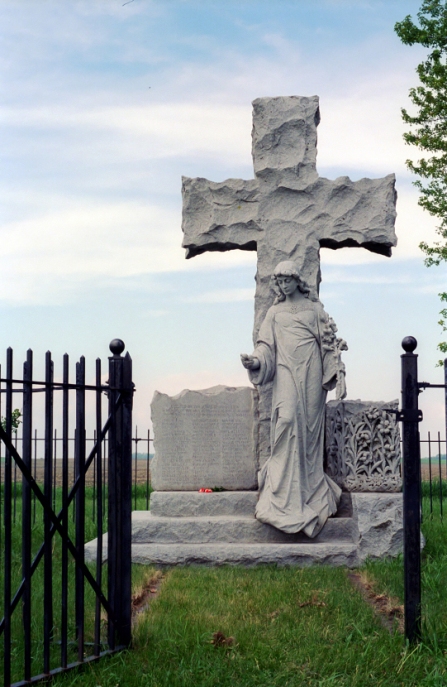 The Milford State Monument along Brown County Road 29 west of New Ulm commemorates the deaths of 52 settlers who were killed in the area during the US – Dakota Conflict. Located along the eastern edge of the Lower Sioux Reservation, Milford had the highest war death rate of any single township. Minnesota Prairie Roots file photo 2012.

Going into the presentation, I thought I knew almost everything about the Conflict. But I didn’t. Or perhaps I’d forgotten details like 500 – 700 people of European descent killed in the war along with 100 Dakota warriors and an unknown number of Native civilians. Refugees displaced as a result of the war numbered 20,000. As I listened, I thought of my own maternal ancestors who fled their Courtland area farm for safety in St. Peter some 30 miles distant.

This sculpture of Alexander Faribault and a Dakota trading partner stands in Faribault’s Heritage Park near the Straight River and site of Faribault’s trading post. Faribault artist Ivan Whillock created this sculpture which sits atop a fountain known as the Bea Duncan Memorial Fountain. Minnesota Prairie Roots file photo.

But it was the Rice County connection to the war which I found most interesting. My interest always centered on what happened in my native Redwood County and neighboring Brown County versus my home of the last 35 years in Faribault. I was unaware that town founder and fur trader Alexander Faribault (who was part Dakota and part French), for example, was at the Battle of Birch Coulee, an intense battle waged near Morton. I can only imagine the personal conflicts Faribault sometimes felt as a person of mixed blood in the war between the Dakota people and white settlers and soldiers.

Madigan also noted the challenges Dakota leader Little Crow experienced in a war he didn’t initially support. I expect Little Crow felt extreme pressure as he tried to negotiate with government agencies while his people starved.

Above the photos and info is this quote by Bishop Henry Whipple to President Buchanan in August 1860: “In my visits to them (the Dakota), my heart had been pained to see the utter helplessness of these poor souls, fast passing away, caused in great part by the curse which our people have pressed to their lips.” This was part of a 2012 display at the Northfield Historical Society on the Rice County aspect of the US – Dakota Conflict of 1862. Minnesota Prairie Roots file photo 2012.

And then there was Bishop Henry Whipple, a well-known figure in my county of Rice and Minnesota’s first Episcopal bishop. He played a key role in the US – Dakota Conflict. Madigan tagged him as “the disappearing hero,” noting Whipple’s strong advocacy for Indian missions; his support of efforts to educate the Dakota and convert them to Christianity and agrarian ways; his backing of fair treaties between Native peoples and the U.S. government; and, most important, his role in convincing President Abraham Lincoln to reduce the number of Dakota executed in a mass hanging in Mankato following the war. Of the 303 men sentenced to death, 38 were hung.

Words on a marker in Reconciliation Park in Mankato where 38 Dakota were hung on Dec. 26, 1862. Minnesota Prairie Roots file photo 2012.

Whipple centered much of the audience discussion following Madigan’s talk. In the context of today’s world, Whipple’s approach to changing the Dakota way of life, rather than respecting their culture, seems outdated. Yet, change appeared inevitable in a time period when settlers moved West into Dakota hunting territory to establish homesteads and to farm, several people noted. I couldn’t help but think those expectations of change and adaptation remain strong today toward our immigrant populations.

The Faribault faith leader’s peaceful approach and genuine kindness toward the Dakota was, as you would expect, not embraced by all. There were, noted Rice County Historical Society Executive Director Susan Garwood, assassination attempts on Whipple’s life. This proved news to me.

Following the war, about 80 Native Americans moved to the Faribault area under the protection of Whipple. Some even helped construct The Cathedral of Our Merciful Saviour, Whipple’s church and the oldest cathedral in Minnesota. Built between 1862 – 1869, it’s on the National Register of Historic Places and remains a place of community care with the Community Cathedral Cafe, many support groups, public concerts and more based there.

As a related addendum, Director Garwood shared that several Dakota and African Americans attended Faribault’s long ago Seabury Divinity School directed by Whipple. The presence of those non-white seminarians caused concern among some, as you might imagine. 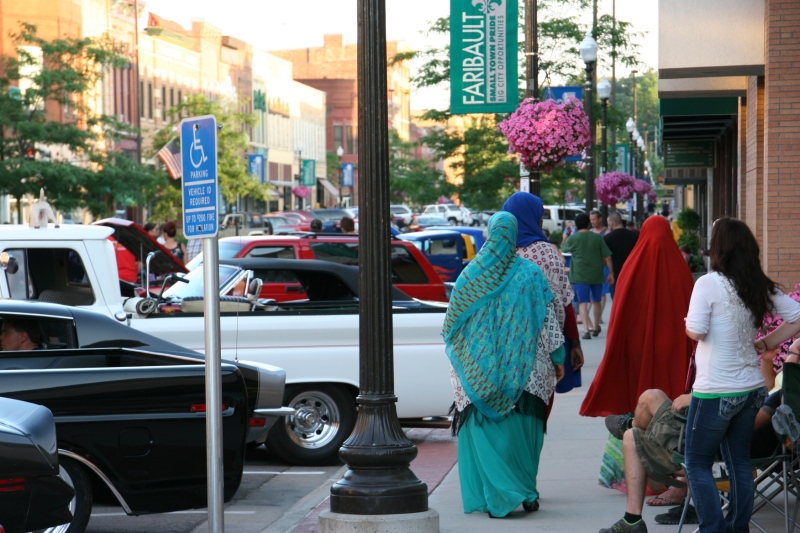 Much has changed, yet much hasn’t. In my community of Faribault, where Whipple worked nearly 160 years ago to embrace and express love to all peoples, conflict remains between many long-time locals and our newest immigrants. The same goes for acceptance between Caucasians and Native Americans in my native Redwood County. To deny its existence would be fooling ourselves. We have, in many ways, become more accepting of each other. But we still have far to go.

While I took away new information from Madigan’s talk, I left with more. I realized how much my approach to history has changed since high school, since I researched and wrote about “The Sioux Uprising of 1862.” My perspective shifted to actually thinking about issues rather than simply regurgitating historical facts/myths/lies. And that is a good thing.