A Minnesota version of the Statue of Liberty at the Holiday Haven motel in Detroit Lakes. Minnesota Prairie Roots file photo October 2019.

FOR A FEW YEARS NOW, I’ve followed the work of award-winning New York City photographer Keith Goldstein. His credentials are extensive and impressive.

But beyond that lengthy list of accomplishments is my genuine appreciation of his work. He specializes in street portraits and in architectural photography. Goldstein captures some pretty incredible pictures of people going about everyday life in the big city and I often wonder how he does it. But he’s that good, unobtrusively photographing individuals in an urban environment that is also part of each photo story. I often find myself studying a frame, surprised by what I see.

New York City is about so much more than the nearby Statue of Liberty and Wall Street and 9/11. This noted photographer reveals that in his images.

Recently, Goldstein’s photo blog has focused on NYC buildings, truly foreign to my rural flatlander background. I’ve only been to this East Coast city once, decades ago while in college. I remember standing on a street corner then, craning my neck toward the skyscrapers. And nearly being run over by someone pushing a garment rack down the sidewalk. I don’t ever intend to return to NYC. I really don’t much care for big cities.

But, through Goldstein’s photography, I am shown this world so different from mine in rural Minnesota. I see the humanity of NYC, raw and exposed. Sometimes I just want to reach into those portraits and wrap my arms around the people who are hurting. Give hugs. I want to stop and listen and offer a smile and encouragement. In the sea of humanity that defines this place, Goldstein manages to find the individuals, to tell their stories through the lens of his camera. 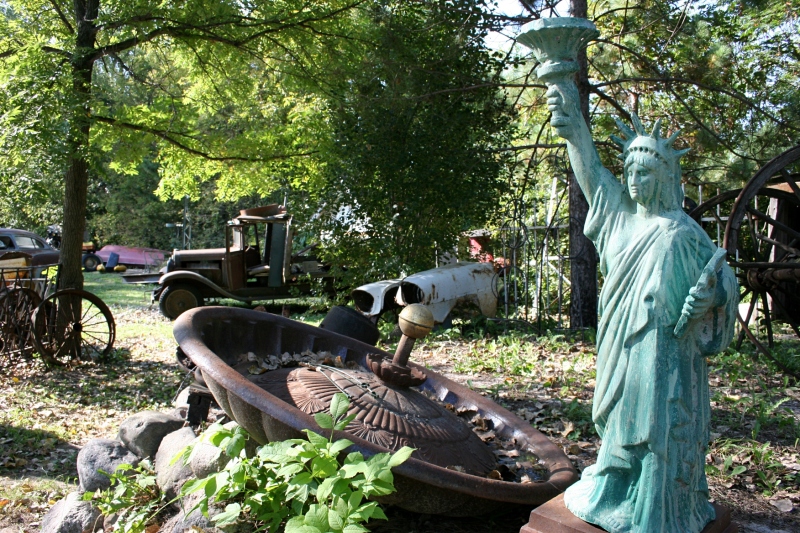 Another Statue of Liberty, this one at Hot Sam’s Foto Park near Lakeville. Minnesota Prairie Roots file photo September 2012.

I consider his photography a gift. Real. Unfiltered. It’s important that I see the peoples and architecture of New York City because these images broaden my world. Goldstein’s photos stretch my compassion and my understanding of these United States of America. We are, no matter where we live, still just people with emotions and needs and hopes and dreams. And we all hold within us the capacity to connect and to care. Goldstein, in his art—because his work truly is art—offers that. And for that I am grateful.

Exploring a greater Boston neighborhood from a Minnesotan’s perspective June 8, 2016 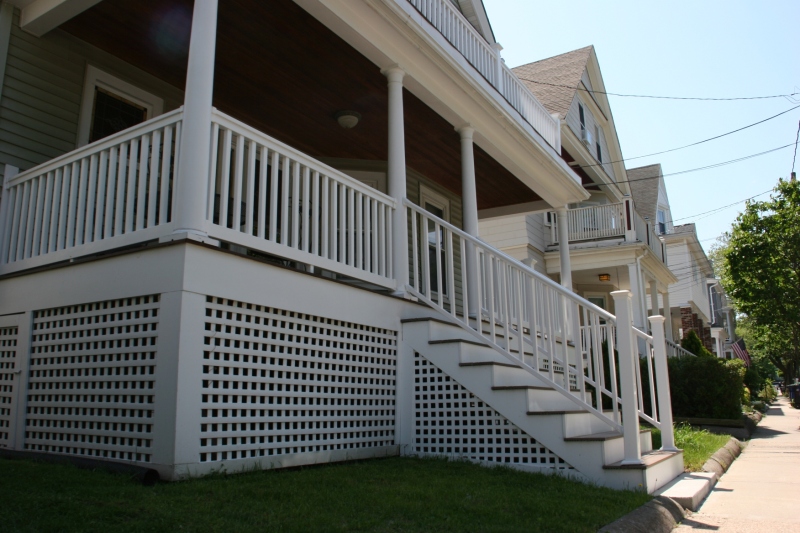 WELCOMING FRONT PORCHES grace nearly every home in the neighborhood where my son lives in Somerville, Massachusetts near Tufts University. 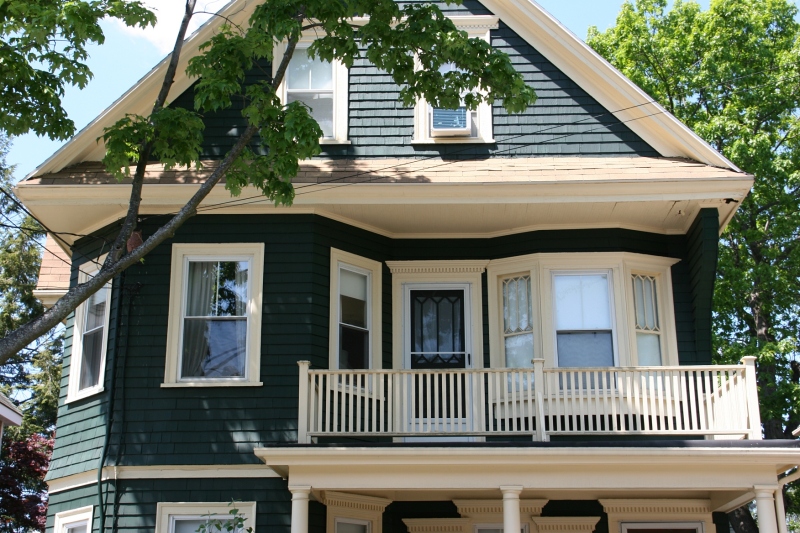 Balconies or enclosed porches extend from most second floors.

Perennials were in bloom in many yards when I visited in late May.

Both are necessities in a neighborhood with minimal green space, not enough to call a lawn or a yard by Minnesota standards. I would be surprised if many homeowners have lawnmowers. Bushes, plants and even artificial turf fill the slim lines of land between houses and sidewalks. 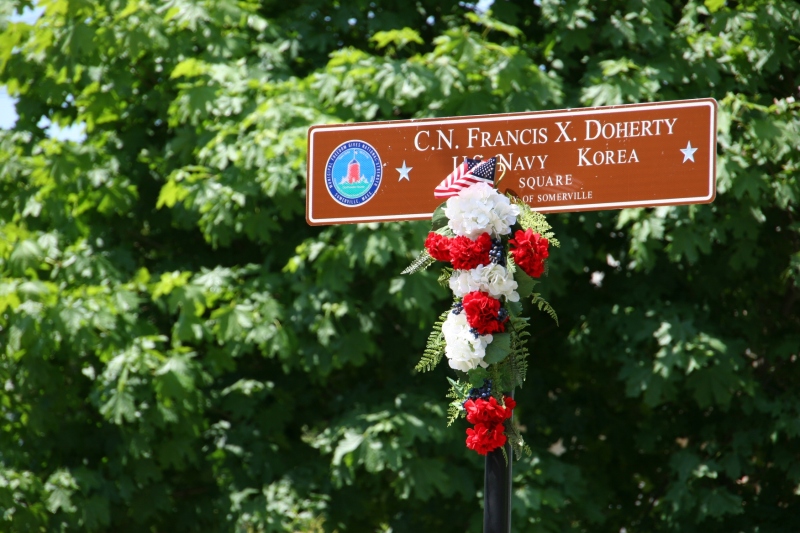 There are no boulevards. Narrow sidewalks trace next to the street. Asphalt circles trees. The lack of land, of space between homes, is especially evident to me, a rural Minnesotan used to lots of elbow room. Everything feels cramped in this neighborhood of old homes. 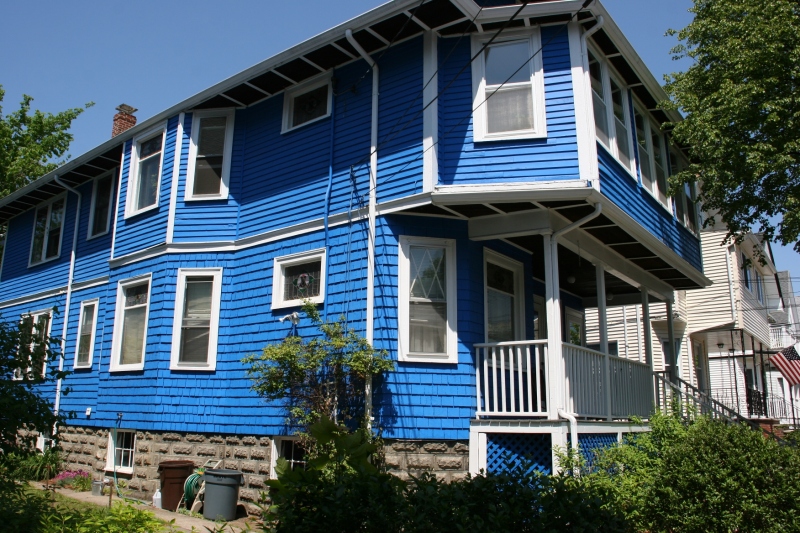 The most colorful house I spotted in the neighborhood.

Noticeably absent are FOR SALE signs on these mostly three-story aged houses, many of them parceled into apartments. Up until recently, my son was paying $850/month rent for the second and third floors of a house apartment shared with three other college students. He’s now subleasing a place nearby for $700/month for the summer. 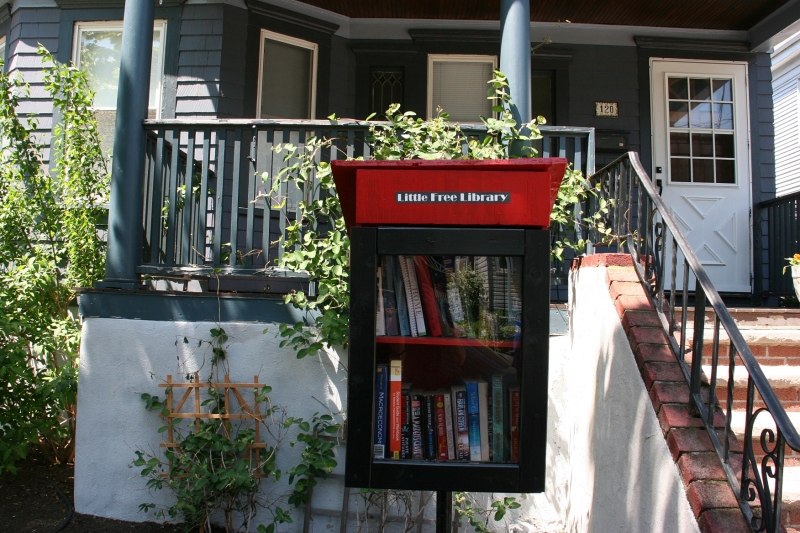 I was delighted to find a Little Free Library near my son’s apartment.

A local noted that houses in the neighborhood are passed down from generation to generation. He lives in his in-law’s house; they live in Florida. I suspect families are hesitant to sell because such a decision means they could never afford to live here again.

A lot of the homes have this barn roof design.

Most of the homes in this area between Tufts and Powder House Square are similar in design. The barn-like roof lines present a comforting, welcoming and homey appearance. At least to me, a farm-raised woman.

Residential streets in my son’s neighborhood are one-way. I can’t fathom how residents managed in the recent winter of record snowfall.

But I didn’t feel welcome here when I learned that my husband and I couldn’t park our van on the street in front of our son’s apartment for three days without a permit. After driving nearly 1,500 miles from Minnesota, parking rules were the last thing I wanted to encounter. But I suppose such regulations are necessary given the lack of space in neighborhoods. Residents are discouraged from owning a second vehicle. Parking is a challenge in this densely populated area.

Miscellaneous whatever on the back of a street sign by Powder House Square.

The son reminded me several times that “It’s not like in Minnesota where you can drive right up to a store.” Or someone’s house. Many residents rely on their own two feet, bikes or public transportation—the “T” or the bus—to get them places.

Could I live in the Boston metro? Maybe if I was 20-something. But now? No. I need space.