IN THE PAST THREE YEARS, since my second daughter moved to Appleton, Wisconsin, to start her job as a Spanish medical interpreter, I’ve enjoyed exploring the Fox Valley area south of Green Bay and an hour west of Lake Michigan.

I remember my first visit to downtown Appleton, where this building is located, and my surprise at seeing tall buildings located there.

Although I’ve tried to convince Miranda to relocate nearer than 300 miles from her hometown, I understand why she’s reluctant to leave Appleton. From my observations, this metro region of some 236,000 residents in 19 communities along the Fox River appears to have a lot going for it in a landscape and lifestyle that can change quickly from urban to rural.

A farm place in the middle of urban housing on the north edge of Appleton, in Grand Chute if I’m correct.

This is a busy and growing region, but one which has not lost its rural roots connection. 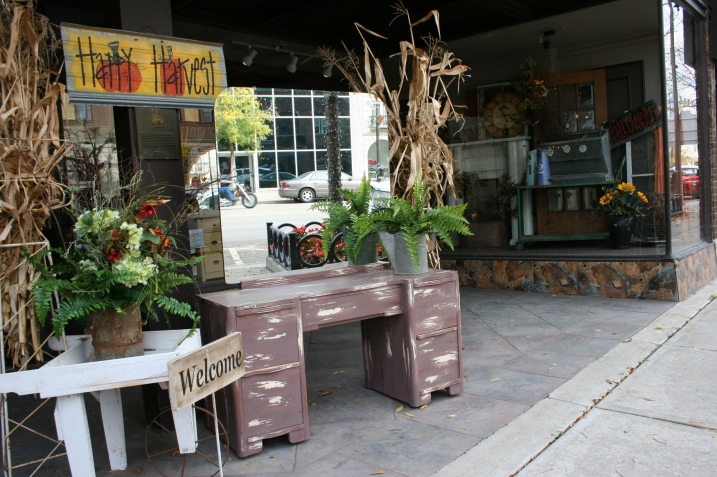 A display outside a downtown Appleton gift shop.

Although I’m not much of a shopper, there’s an abundance of shopping options from the Fox River Mall to one-of-a-kind local shops in the heart of an historic downtown. Plus, Appleton has a fantastic farmers’ market, which I’ve perused twice.

Ethnic and other dining choices abound in the Appleton area.

Great places to eat, too, like the best pizza accompanied by on-site brewed beer at the Stone Cellar Brewpub and delectable Indian cuisine at Sai Ram. Whenever my brother-in-law Marty, a long distance trucker, travels to Appleton, he’ll phone Miranda and she’ll pick him up and they’ll go to the Stone Cellar for pizza.

Showing until December 15 at The Trout Museum of Art, a collection of Katharine Hepburn’s costumes.

On our most recent trip to Appleton, we not only celebrated my husband’s birthday at the Stone Cellar, but earlier in the day explored nearby High Cliff State Park and afterward checked out the Katharine Hepburn: Dressed for Stage and Screen exhibit at The Trout Museum of Art. Appleton offers plenty of cultural opportunities at places like the Fox Cities Performing Arts Center (which I have yet to visit and which my daughter wishes had more affordable ticket prices) and Lawrence University.

For some time now, I’ve wanted to visit the Trout. The museum’s name has nothing to do with fish, but with Dr. Monroe and Sandra Trout, who gifted 150 museum quality works of art and left a $1 million endowment. I was excited to see the Trout Collection.

But it was not to be. Apparently I misunderstood the information on the Trout website and the only collection shown was Katherine Hepburn’s costumes on loan from the Kent State University Museum in Ohio. Now if I was into film and Hepburn and fashion, this certainly would have held my interest. But I am not, nor are my husband and daughter. We breezed through the exhibit in 30 minutes under the scrutinizing watch of a security guard. When I asked if there was more to the Trout, the man at the admissions desk said we’d seen it all.

OK, then. To add to my disappointment, no cameras were allowed inside the Hepburn exhibit. I rather expected that, but I was hoping otherwise. 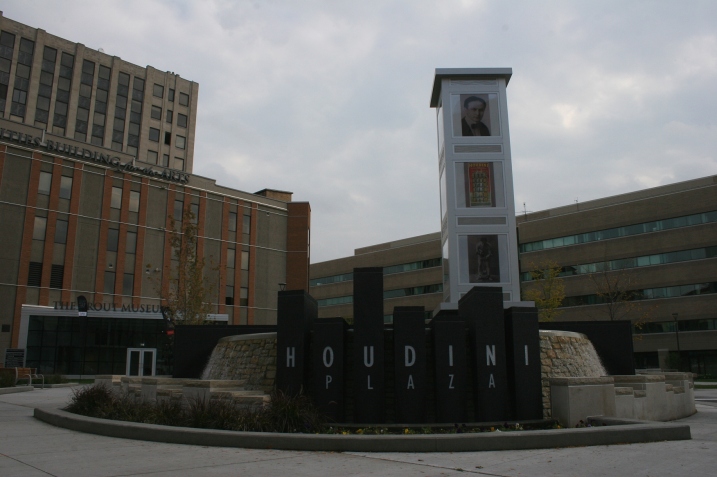 I settled for shooting photos outside the Trout of the beautiful new Houdini Plaza, honoring escape artist Harry Houdini who called Appleton his childhood home. A permanent exhibit on Houdini is housed in the nearby History Museum at the Castle, where I once saw an interesting Leonardo da Vinci exhibit.

I wish we’d gone to the Castle to tour the current temporary exhibit, Food: Who We Are and What We Eat. That might have been entertaining considering I’ve spotted green and gold brat buns at Festival Foods in Appleton.

If I’ve learned anything in the past three years about Wisconsin, it’s that Wisconsinites love their beer, brats and Packers. 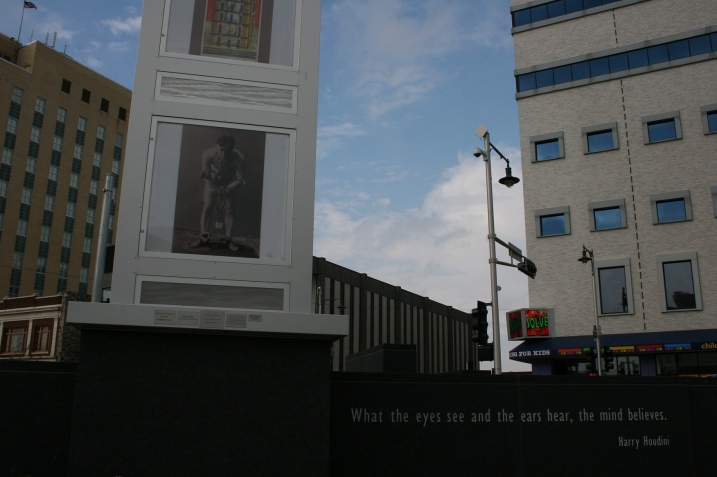 Steel, stone, marble and brass comprise the first seven floors of the Irving Zuelke building constructed in 1931. An additional five stories were added in 1951. 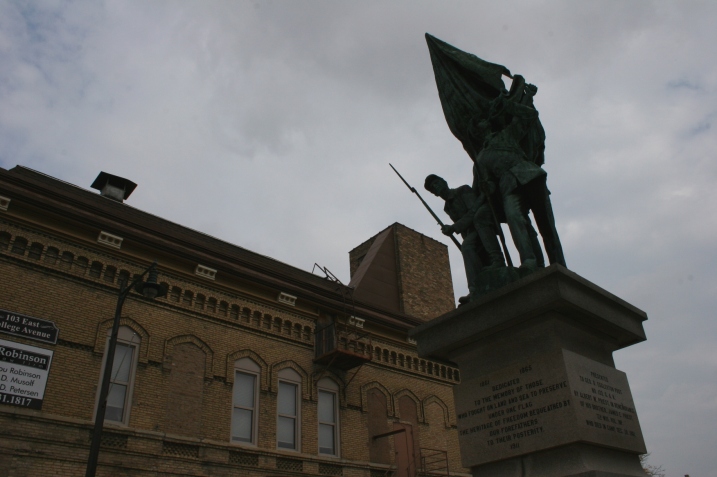 I discovered this bronze monument to Civil War Union soldiers near Houdini Plaza, tucked between a parking ramp and a building.

FYI: To read previous posts from Appleton, and there are many, simply type Appleton into the Minnesota Prairie Roots search engine. Also, photo ops on this visit to downtown Appleton were limited given the intermittent rain.