My thoughts on the prejudice that threads through my Minnesota community April 19, 2018

A photo and comment by a visitor posted at the “Selma to Montgomery: Marching Along the Voting Rights Trail” exhibit at St. Olaf College in 2015, used here for illustration only. Minnesota Prairie Roots file photo 2015.

TWELVE YEARS AFTER my then 12-year-old son was struck by a car while crossing the street to his school bus stop, my husband and I are still occasionally asked whether the driver in the hit-and-run has ever been found. The answer: No.

I’m OK with that. Caleb was not seriously injured and enough time has passed since the May 12, 2006, incident that my anger has subsided.

But now my anger has risen anew—not at the driver but rather at a recent comment made by an acquaintance. “Was it a Mexican?” the man asked of the unknown driver.

A chair placed before a Stephen Somerstein photo offers visitors a place to sit and contemplate in the “Selma” exhibit. Minnesota Prairie Roots file photo 2015.

How do you respond to something like that—something so totally ignorant and racist and uncalled for that it makes my blood boil to think that someone in this day—2018—would even think that, let alone speak it. Why that assumption? What led him to believe the driver was a “Mexican” versus a Caucasian or even a green alien from Mars?

I can’t tolerate this type of blatant racism. About Hispanics. About Somalians. About anyone. Just days ago I heard negative comments about Somalians as it relates to parking issues in Faribault’s downtown business district. 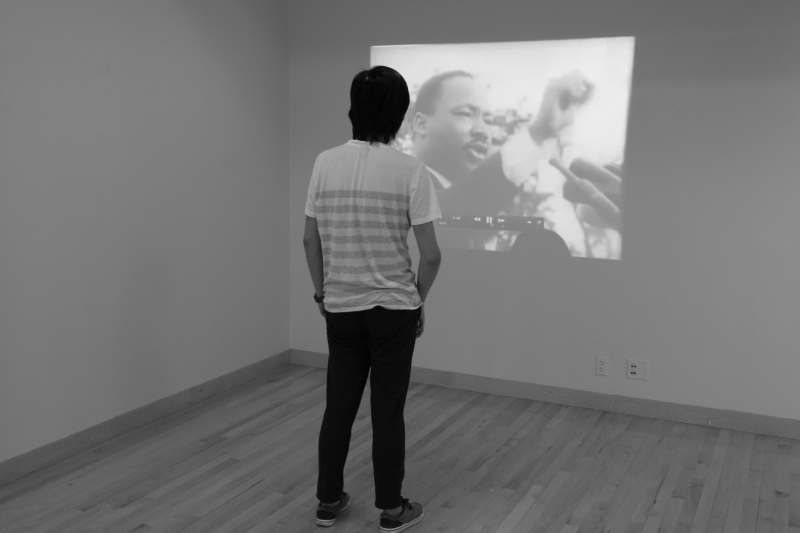 I didn’t grow up here. Once I was an outsider trying to fit into Faribault, where generations of families live, where many people are inter-related, where young people stay upon graduating from high school or return to after college. I’m not saying those are bad things. Faribault’s a wonderful place to live. But I suspect the hometown factor, the deep roots, may have something to do with the “was it a Mexican” type attitude some locals hold toward newcomers, especially those of color. There’s fear in the unknown, fear in change, fear in the prospect of a community becoming something different than it has always been.

Kids used markers to create flags from their native countries during the International Festival Faribault in August 2015. Minnesota Prairie Roots file photo used for illustration only.

Change oftentimes does not come easily. Yet, that’s no excuse for sweeping negative assumptions and racism. I am thankful for the efforts of many within Faribault who welcome newcomers. Like the Faribault Diversity Coalition and individuals who tutor, assist, teach, embrace immigrants and, yes, even welcome outsiders like me from Redwood County, Minnesota. I arrived here 36 years ago knowing only my new husband (also a non-native). It took awhile for me to fit in, to find my place here.

Today I consider Faribault home. I love this community and the many dear friends I’ve made here. But I don’t appreciate the underlying and sometimes overt prejudice I occasionally see and hear.

No, my son was struck by a blue 4-door Chevrolet Cavalier or Corsica. Driver unknown. Race unimportant.

ON THE SAME TOPIC:

I find especially notable a comment made by Faribault Public School Superintendent Todd Sesker during an “AM Minnesota” interview with Gordy Kosfeld on KDHL radio. During that Monday morning interview, Sesker discussed the issue of 400-plus students open-enrolling outside of the Faribault School District. The district plans to survey families and learn why these students are choosing to attend schools elsewhere.

Sesker says, in part, “We know some of the rumors that are out there and some of the people that are complaining about our schools. We know about the cultural differences…”

That tells me a lot.

According to 2018 enrollment by race/ethnicity data published on the Minnesota Department of Education website, more than half of the students in Faribault Public Schools are of a race/ethnicity other than White. Here’s the break-down on the three largest ethnic groups among the district’s 3,777 students, according to the MDE: 24.2 percent are Hispanic/Latino, 23.8 percent are Black/African American, and 47.4 percent are White.

I suggest you listen to the radio interview with Sesker by clicking here. Discussion on the open enrollment issue begins at about minute 13.

NOTE: All comments are moderated. Please be respectful in your comments and discussion. I reserve the right as author of this personal blog to decide whether or not to publish a comment.