This photograph was taken at a Helbling Family Reunion in August 2017, the last time our three adult children were all back home in Faribault. Here my husband and granddaughter play bean bag toss. Minnesota Prairie Roots file photo 2017.

TWO FLY IN from Boston. One drives 260 miles from Madison, Wisconsin. Three arrive from an hour away.

They will all be here on Saturday. In my southern Minnesota home. It will be the first time in 15 months that we have all been together—our once nuclear family plus a son-in-law, a granddaughter and the son’s girlfriend.

MY THOUGHTS WEIGHED heavy earlier this week. So today I focus on the positive.

It is important in the midst of chaos, unrest and discontent to reconnect with whatever brings you joy, peace and purpose.

Four generations: Great Grandma Arlene, Grandma Audrey, Mother Amber and baby Isabelle, all together for the first time in July 2016. This photo represents the love of family to me. Minnesota Prairie Roots file photo 2016.

I find my joy in my family,

peace in my faith,

and purpose in my passions. 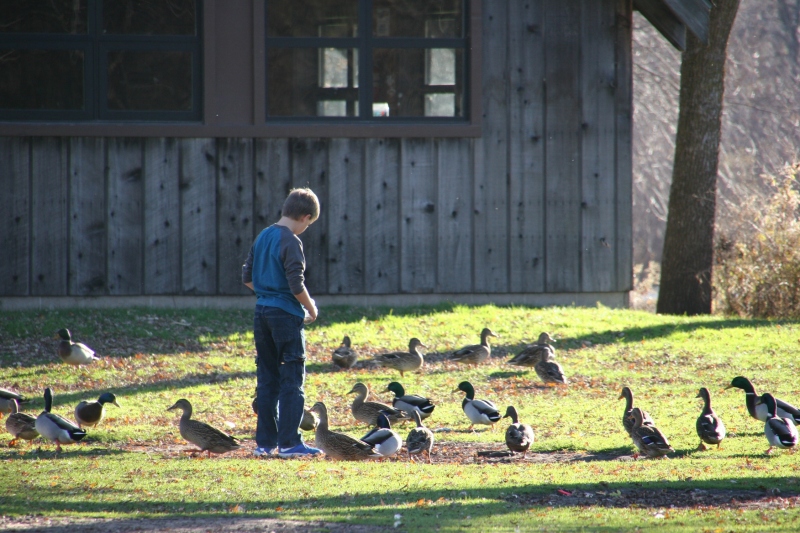 May you find your place of contentment, your sense of peace, your happiness in life. You are worth it.

TELL ME: Where do you find yours?

SINCE I’VE TOUCHED on two hot button topics—defective shingles and dogs in grocery carts—the past two posts, I’m focusing this morning on the positive.

Good Monday morning to you. It’s 50 degrees here in southeastern Minnesota at 7 a.m. On December 3. Love it.

Didn’t love the thick fog so much Sunday morning traveling back from north of the Twin Cities metro after spending the night with my husband’s oldest sister and her husband. But we sure did enjoy the “alone” time with them for a post Thanksgiving dinner. 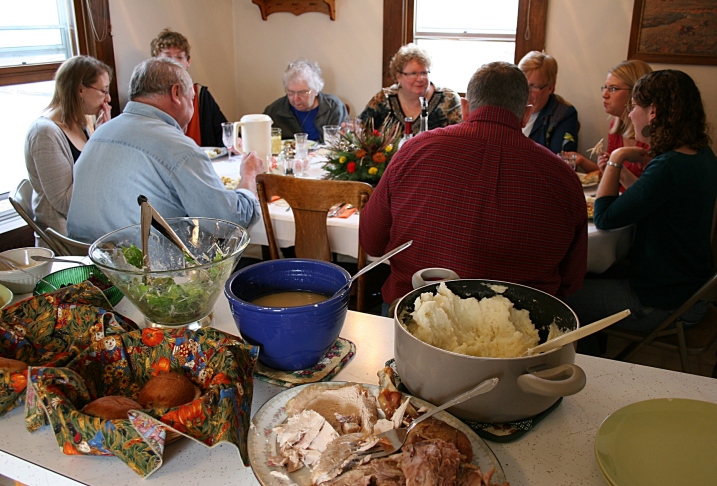 Thanksgiving Day dinner 2011 with my family and a small part of my extended family. File photo.

Typically when we gather with Randy’s family, it’s a whole mass of people with minimal time for one-on-one visiting. And as nieces and nephews marry and start families, the visits with extended family have become less frequent and we’ve now moved from an annual Christmas get together to a summer-time reunion. That’s fine by me as it’s one less place to be during the holiday season.

Anyway, our eldest daughter and her boyfriend also joined the four of us for Saturday evening’s meal of turkey and the trimmings. It’s the first time we’ve seen them since Marc moved in October from California to St. Paul. My mom asks me all the time, “How does Marc like Minnesota?”

I can now report that he seems to like it just fine. (Of course, he has not experienced a “real” Minnesota winter yet.) He commutes 12 minutes via the downtown St. Paul skyway system and one outdoor block to his place of employment.

Thanks to my friend, Mandy, we delivered an artificial Christmas tree to Marc for his St. Paul apartment. I sent a mass email to about a dozen friends last week asking if anyone had a tree they no longer needed and Mandy responded. Such great friends we have.

Speaking of friends, here’s one of the things I love about a town like Faribault, which, by my standards, is not a small town, but which by Twin Cities metro standards likely would be considered small-town. Yesterday while shopping at one of two local grocery stores, I encountered three friends. Yes, it takes awhile to get the cart filled when you “have to stop and visit.” But I wouldn’t have it any other way. 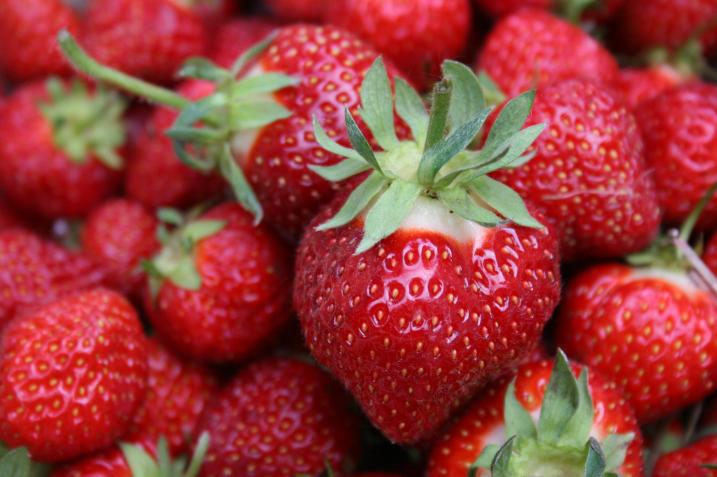 Not the strawberries from Roger’s farm, but elsewhere. File photo.

Finally, and this is not meant to make anyone feel sorrowful. But a 79-year-old friend died on Friday. He had a myriad of health issues and his wife died only in May. They were a great Christian couple. We were especially close to Roger. He was always so kind and good to our family, giving us strawberries, sweetcorn and other produce he grew on his rural Faribault acreage.

But more than that, Roger embraced our family with a genuine and caring warmth. Several times Roger invited Randy and me out on a Sunday evening to play pegs and, I can’t remember the name of the game. We would play, but mostly listen to Roger tell his jokes and stories. He loved to tell jokes and stories.

We would laugh, and then laugh some more.

And when the game ended, Roger’s wife, Delores, would dish up the homemade ice cream Roger had made.

It is the seemingly simple things in life—like dinner with extended family and friendship—which make me happy. Life is good on this Monday morning in December.

WHAT MAKES YOU HAPPY on this Monday morning?

I URGED HIM to speed up, to catch up to that yellow jeep ahead of us.

“I want to take a picture,” I explained, and my husband obliged although he thought me a bit crazy.

And maybe I am sometimes. But that canary yellow jeep, the single visual jolt of brightness on yet another recent dreary weekend, tripped something in my brain.

If you live in Minnesota, I expect you’ll understand. I mean, honestly, weren’t you tired of all the cold and rain and gloom on the heels of a long and snowy winter? (Remind me of that tomorrow when the temperature is predicted to reach 100 degrees or higher.)

So, given that context, the yellow jeep with the smiley face wheel cover made me smile as we traveled on U.S. Highway 14 between Mankato and Eagle Lake recently. 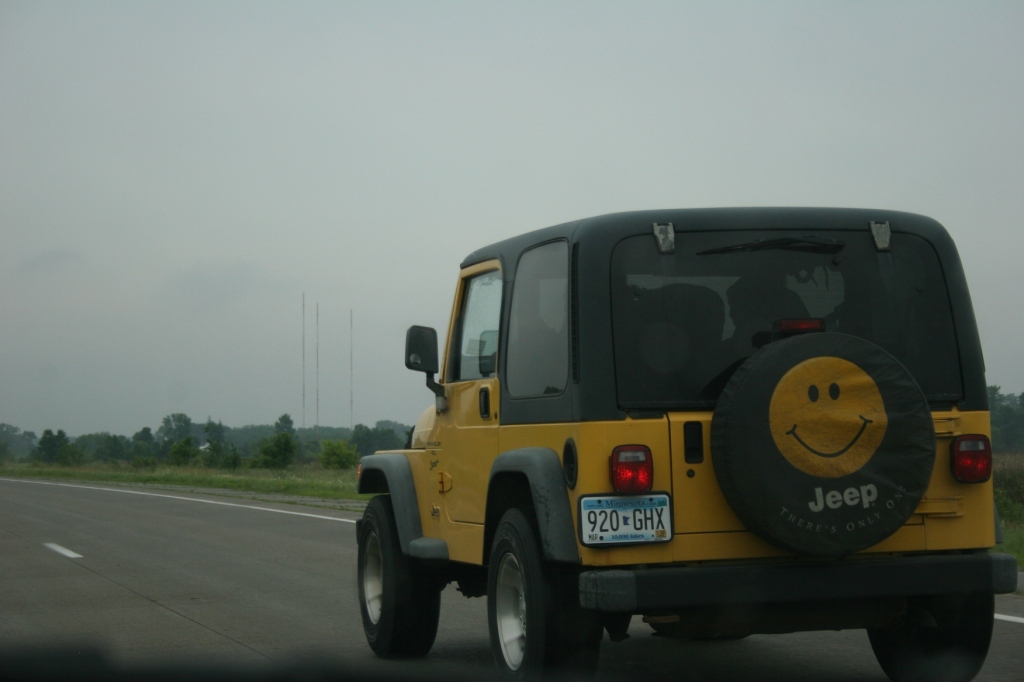 Smiley faces, no matter where I spot them, always increase my happiness quotient.

My appreciation of smiley faces stretches back further than I’d like to admit these days. This happiness symbol popped up everywhere when I was in high school, which would be, yes, the 1970s. Oh, how I wish I still had my smiley face bulletin board and my smiley face button.

So there, that should explain why I wanted to photograph the yellow jeep on a drizzly Saturday afternoon along a Minnesota highway. The smiley face represents a link to my past, to those turbulent teen years when I needed a bright smile as much then as I sometimes still need one some four decades later.

I can’t think of another symbol with such upbeat universal appeal. Can you?