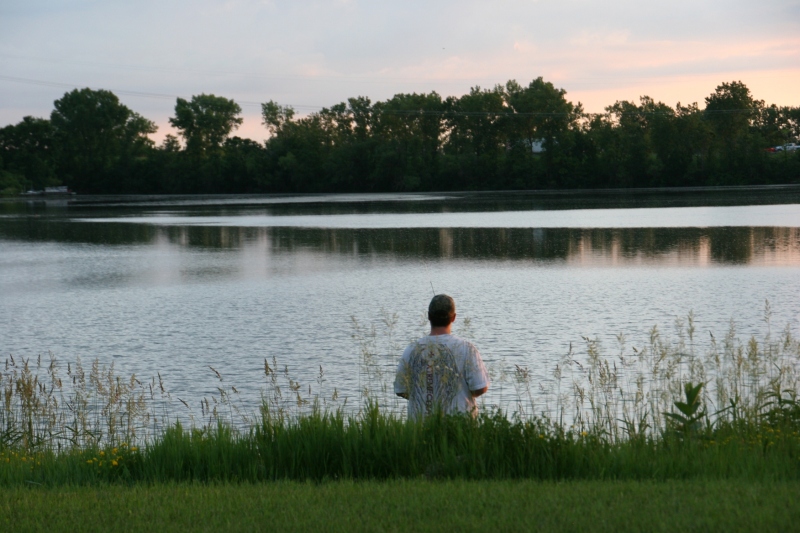 Fishing in the gloaming of the day, June 12, Cannon River at King Mill Park, Faribault, Minnesota.

IN PHOTOGRAPHY, LIGHT isn’t everything. But it ranks among the top factors in creating a good photo as do framing, perspective, practice and creativity. A good camera is nice, too. Not essential. My Canon DSLR 20-D, for example, would be considered aged by most. Yet, I manage to produce marketable and memorable images. 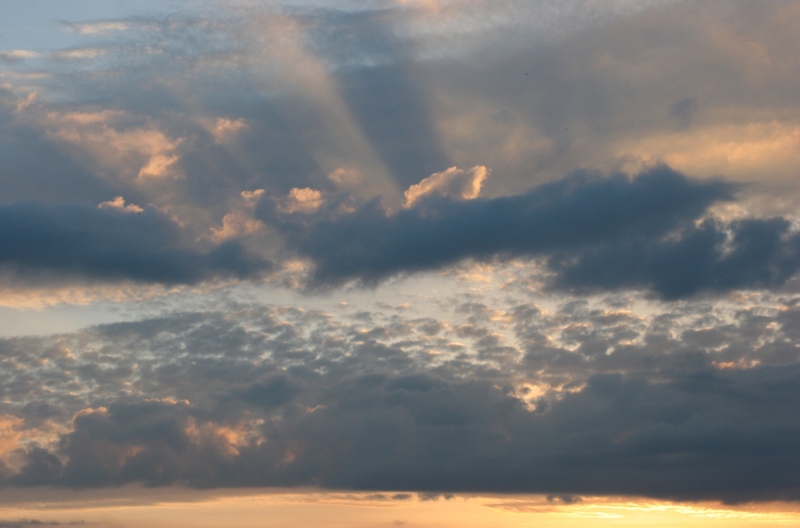 Golden light slices across the sky. 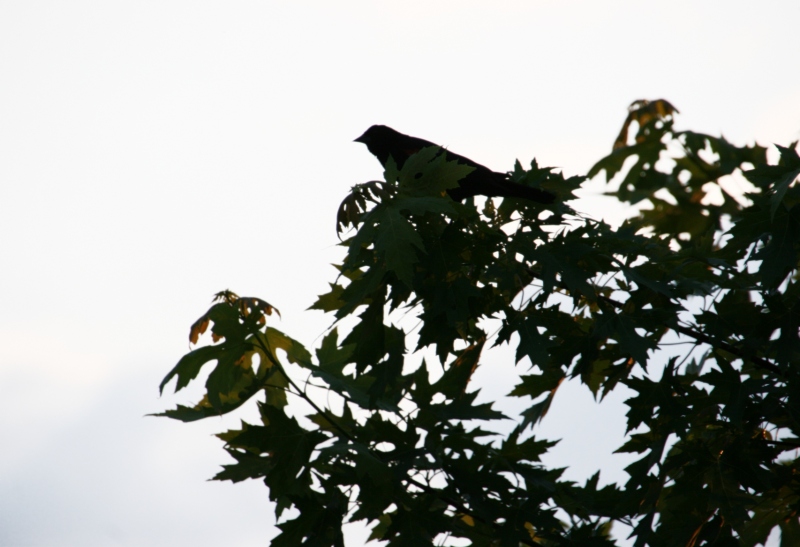 A bird in a bush presents a striking silhouette in this edited image. 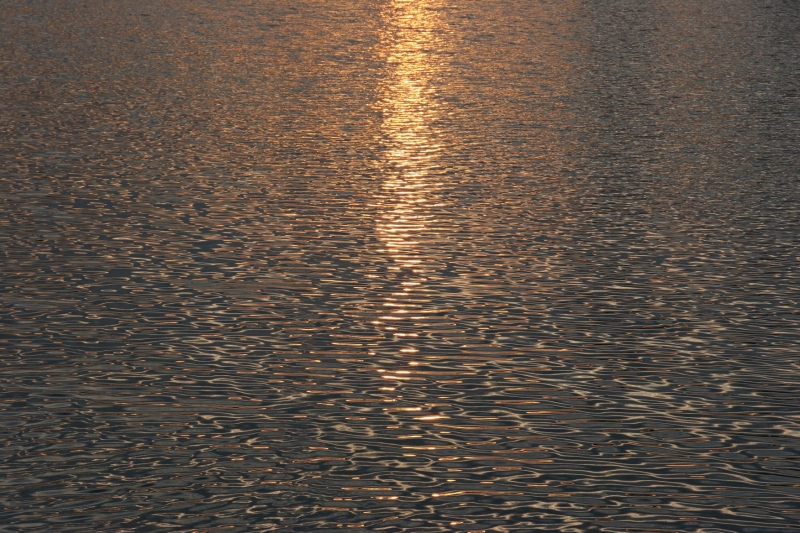 If you’re serious about photography, you’re aware of the golden hour—the hour right after sunrise and right before sunset. The light is softer, warmer then, lending itself to photography. 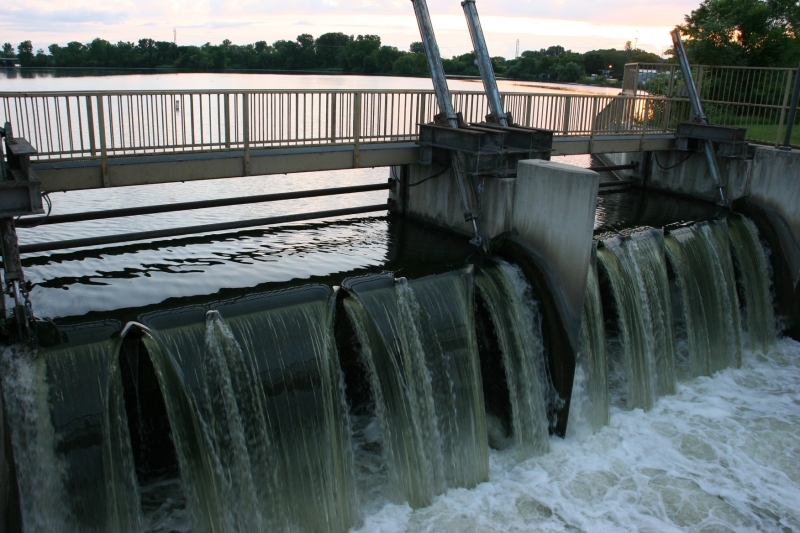 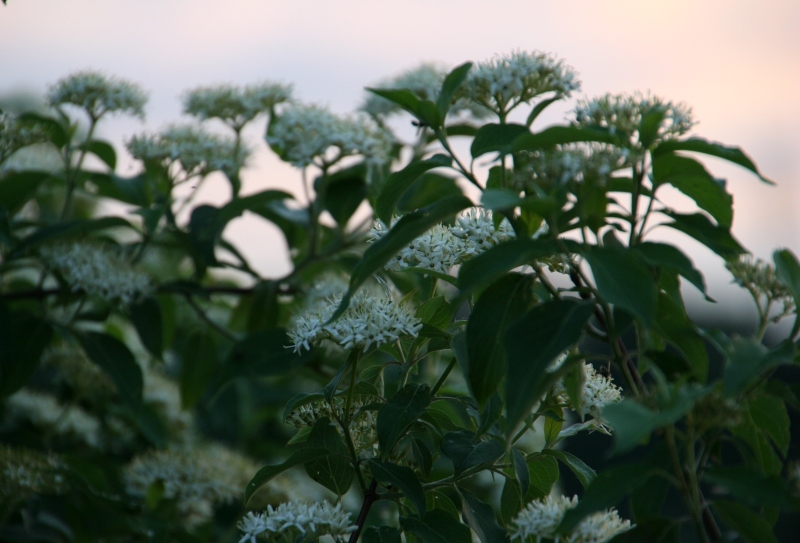 Soft colors tinge the sky as the sun sets with this bush in the foreground. 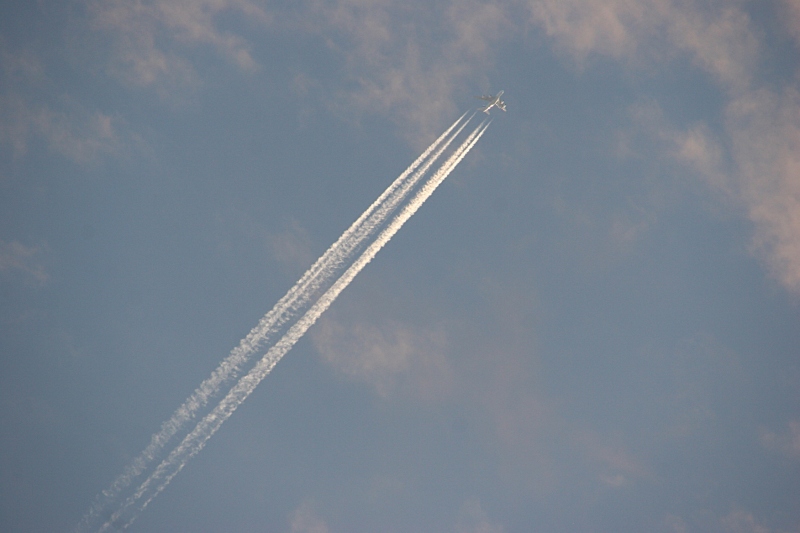 High above, sunshine glints on the trails of a jetliner.

Several months ago, just days before I fractured my left wrist thus halting all photography for the summer, I shot some evening golden hour scenes at King Mill Park along the Cannon River in Faribault. I love this time of day in southeastern Minnesota. There’s a certain peacefulness as day closes and the door opens to evening, then night. 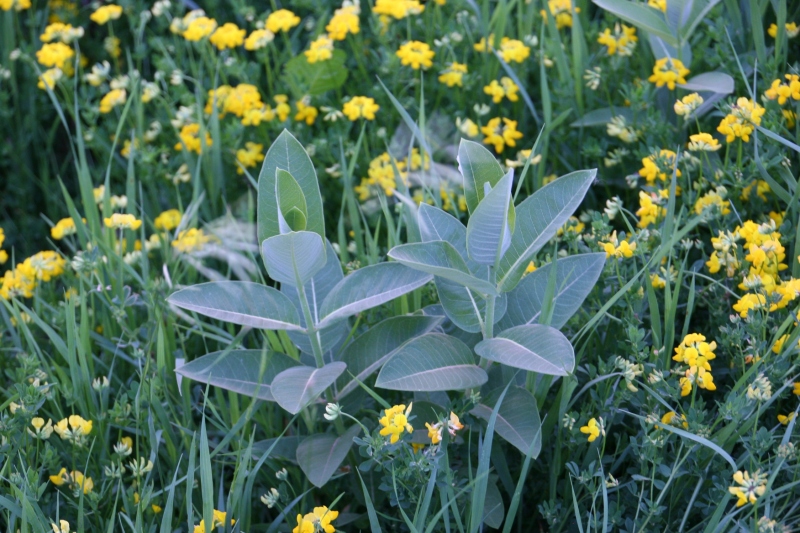 Milkweed and other flowers rim the shoreline.

Rather than expound in words, I’m showing you, because, oftentimes, a picture really is worth 1,000 words.

FYI: Tomorrow I’ll show you the first images I shot after my orthopedic doctor cleared me to use my camera some 10 weeks after my bone break and subsequent surgery to implant a plate. 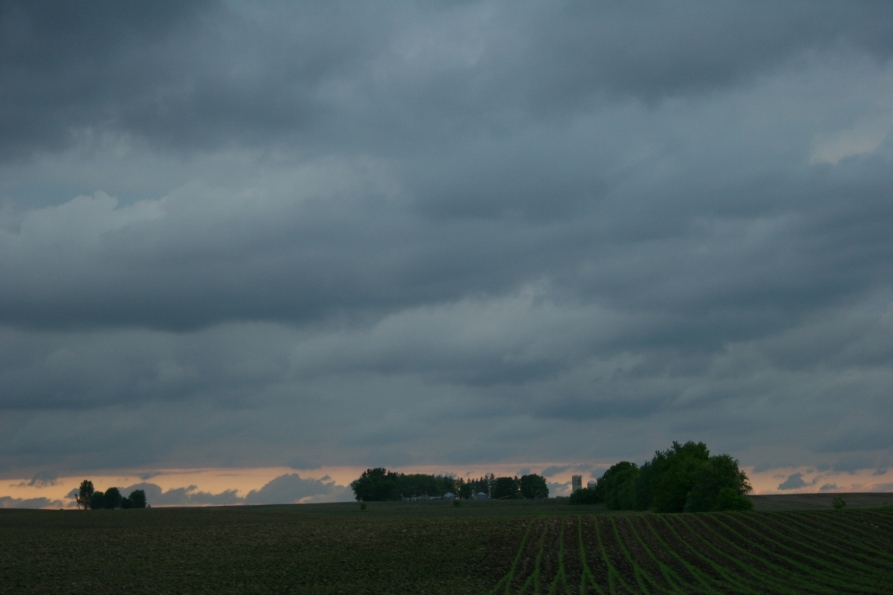 LIGHT. Therein lies a factor that can make or break a photo.

Any student of photography covets the golden hour, that time around sunrise and sunset when light softens and sets a magical mood and tone. 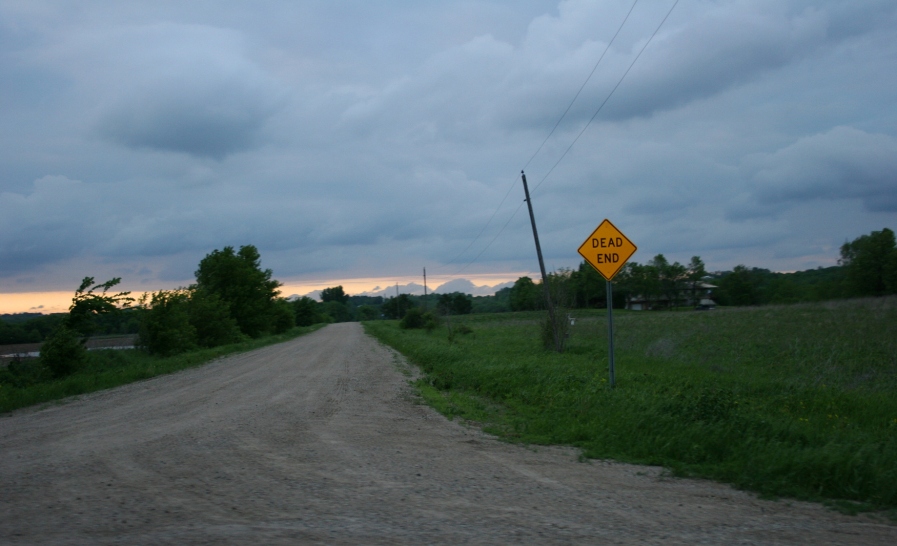 Monday evening, driving to and from a friend’s rural acreage east of Faribault to gather buckets of rhubarb, moody skies and light drew me to raise my camera, to fire off a few rapid shots of the landscape. 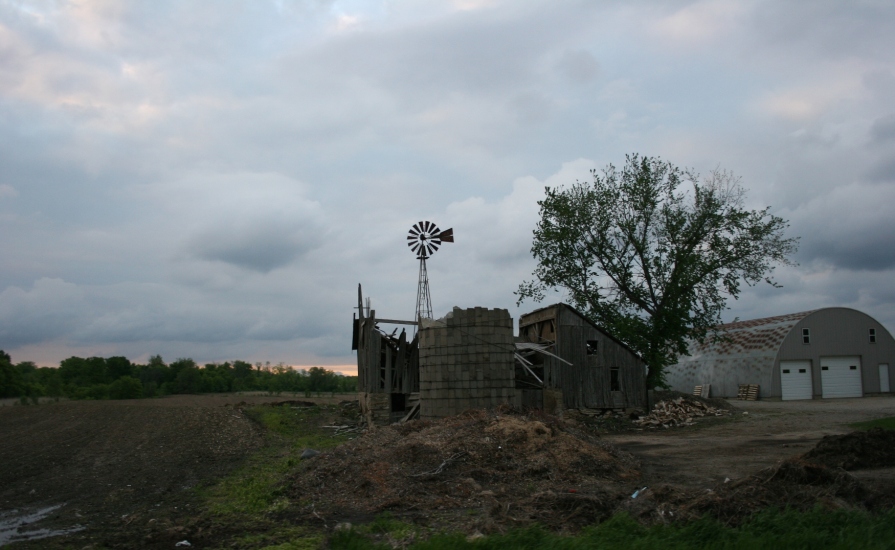 This windmill and decaying barn and silo caught my eye along 220th Street East.

There was no time to pause and compose, only snap through the rolled down passenger side window of the van.

Back in town, that sweet sweet light, although fading, still mingled with hovering grey skies that threatened more rain. 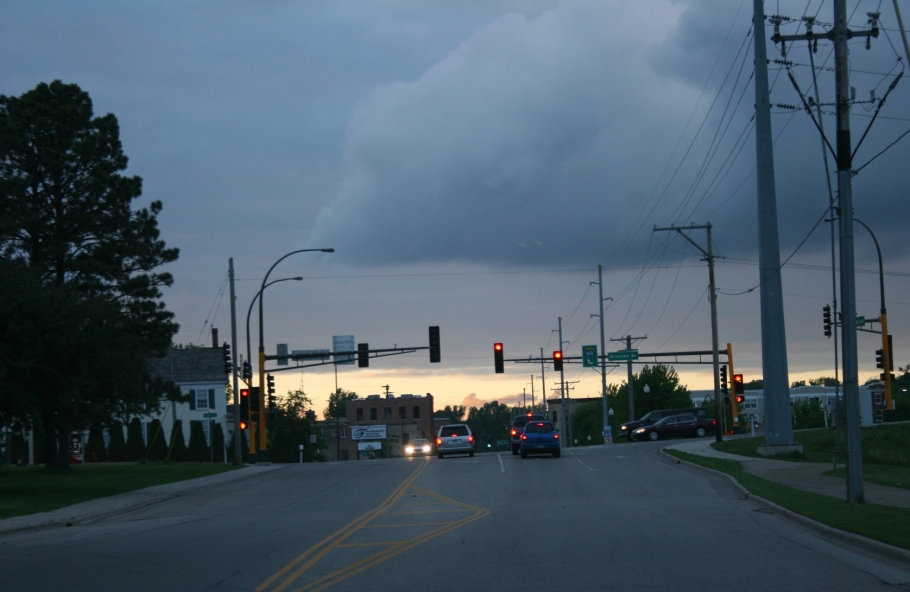 Several blocks from my home, Willow Street intersects with Minnesota State Highway 60, right, and Division Street, left. To the left is the home, now a museum, of founding father, Alexander Faribault.

Again, I lifted my camera, this time shooting through the windshield, to capture a few images of this place I’ve called home for 32 years. 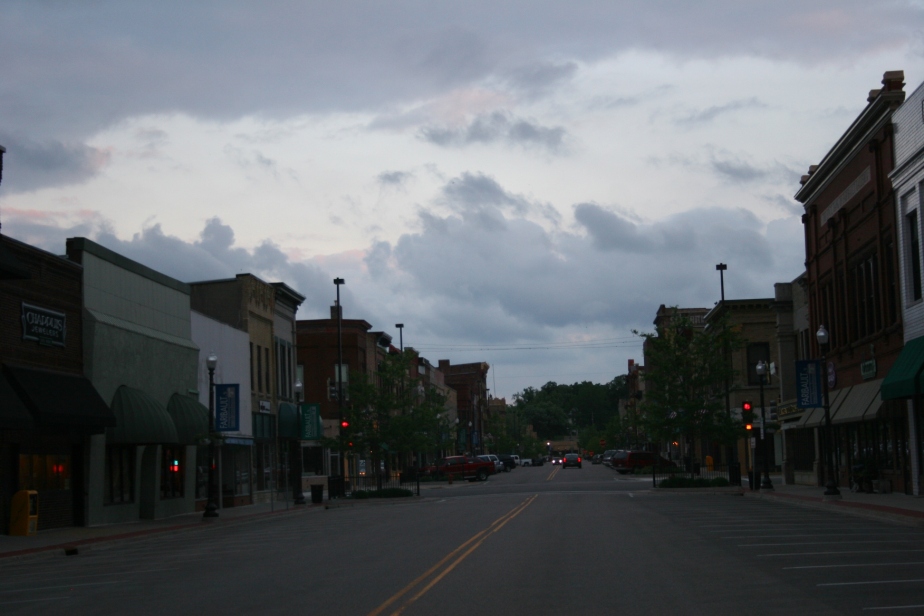 A portion of historic downtown Faribault in the fading light of day.

Historic buildings define downtown Faribault. I love this downtown for its quaintness, its history, its small town feel (although Faribault, in my opinion, is not a small town with nearly 30,000 residents). 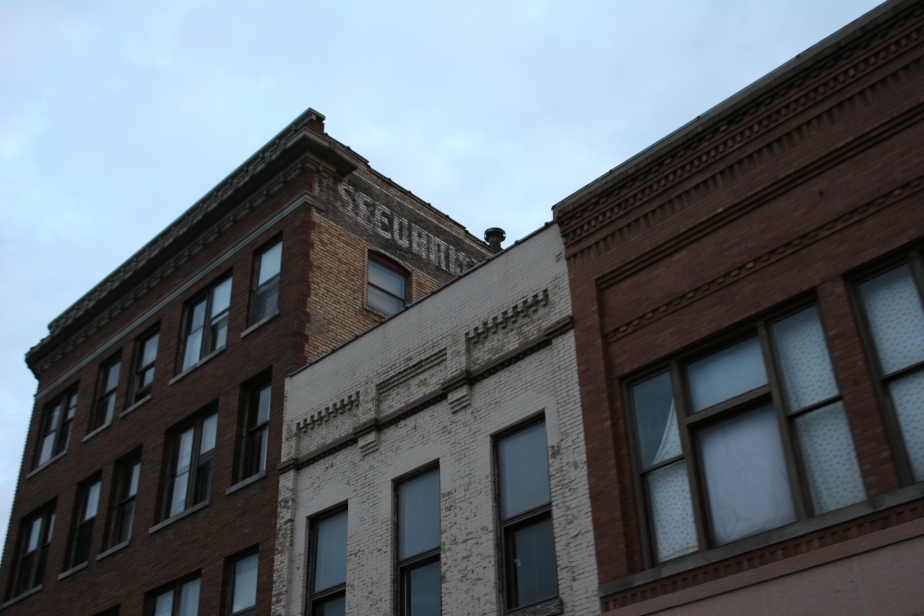 I often wonder why locals and outsiders seem not to value this historic district with the same enthusiasm shown to similar historic Minnesota communities like Stillwater, Red Wing and Hastings, even neighboring Northfield.

Such were my thoughts during the golden hour of sunset.

Chasing the light in Luverne September 18, 2013 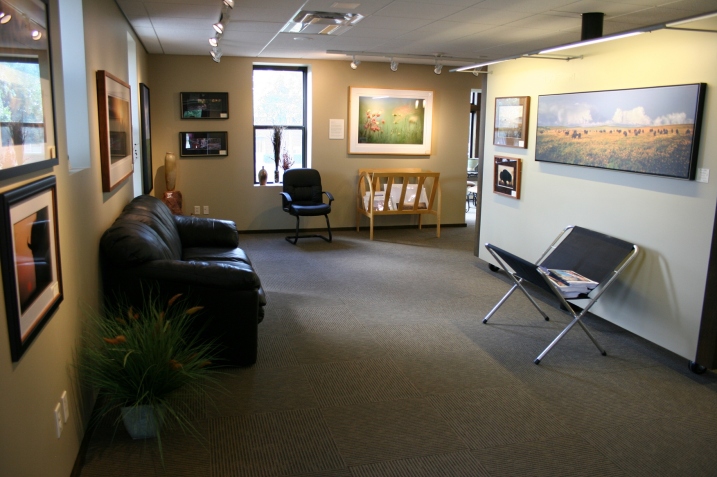 An overview of the gallery’s inviting first level.

WALK INTO THE BRANDENBURG GALLERY in Luverne with a camera and you likely will feel unworthy and intimidated, but mostly in awe. 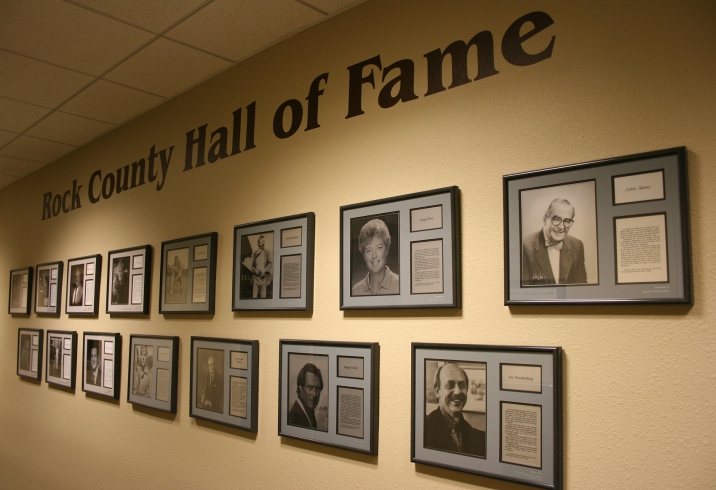 Brandenburg is among native residents honored in a lower level hallway Rock County Hall of Fame. He’s on the lower right, inducted in 1992. Brandenburg graduated from Luverne High School in 1963 and, after college, worked as picture editor at the nearby Worthington Daily Globe while also freelancing for National Geographic. He left the Globe in 1978 to do contract work for National Geographic. 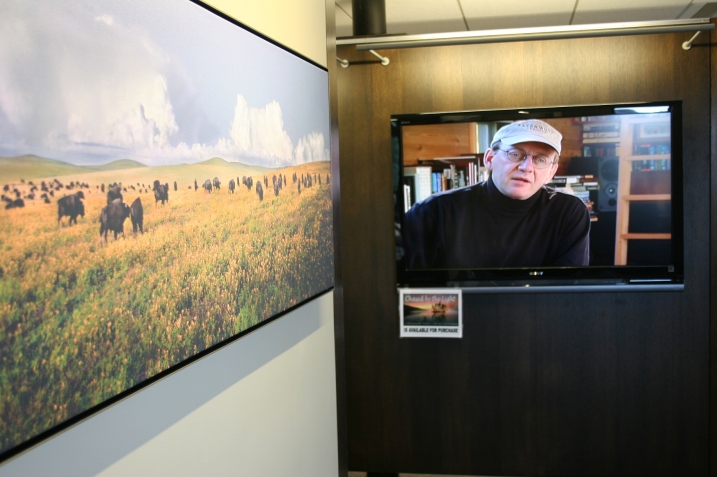 A Brandenburg bison photo hangs to the left and the photographer talks about his work in a video, right.

For more than three decades, Brandenburg traveled the globe photographing for National Geographic. Yes, he’s that good. He’s accumulated numerous awards and has been published in so many places I can’t possibly list them all. (Click here to read his biography.) 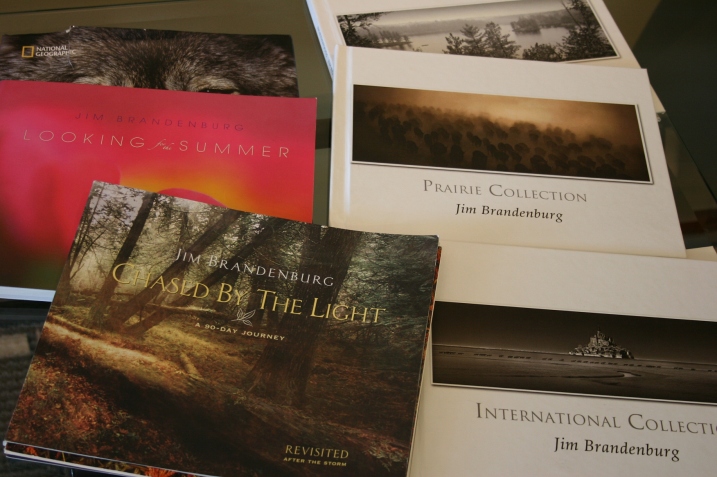 Some of Brandenburg’s photo books.

For years I’ve wanted to tour this gallery in the extreme southwestern corner of my state, to view, close up, the images I’ve seen in books, plus more. I wanted to study his photos—the light, the angles, the perspective. 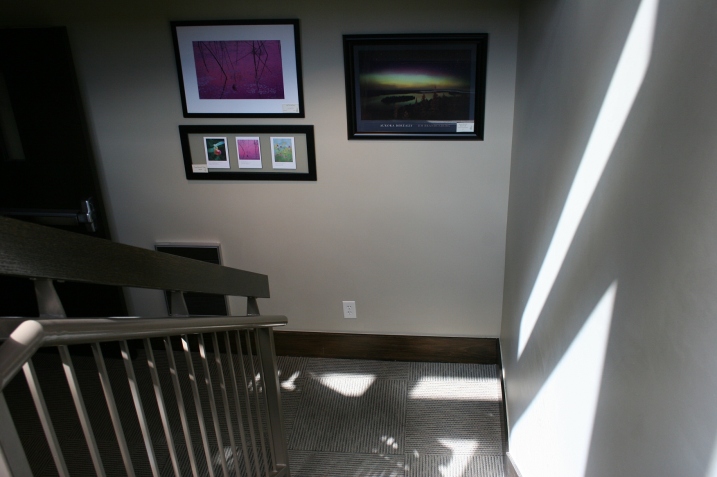 Light plays upon walls, floors and Brandenburg photos in a stairway display.

Brandenburg is known for his focus on light. Light, as all serious photographers understand, can make or break a photo. This noted photographer features some of his best “light” photos in a published collection, Chased by the Light—A 90-Day Journey. Images from that book are among those showcased in the gallery. 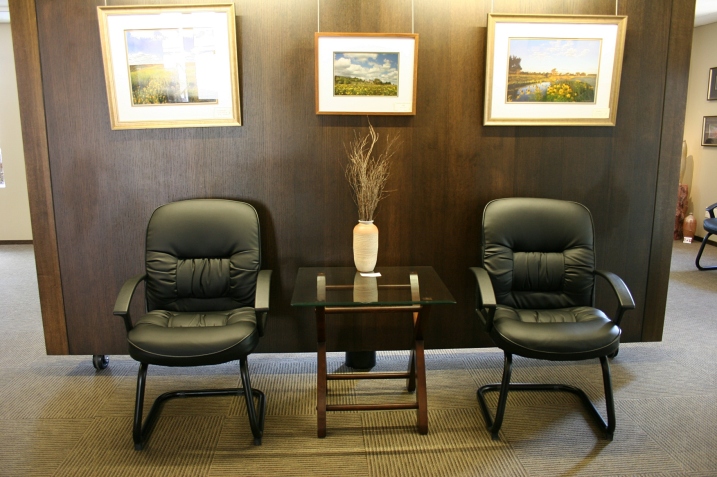 The first floor of the gallery, which doubles as the Luverne Chamber of Commerce office, is artfully and comfortably decorated. Here are three of Brandenburg’s prairie photos. The tall grass prairie, he says, played in to his development as a photographer. He calls prairie grass magical.

Given my deep love for my native southwestern Minnesota prairie, I most appreciate Brandenburg’s prairie images, displayed on the first floor of the gallery. If you doubt that beauty exists on the prairie, you won’t after seeing these photos. 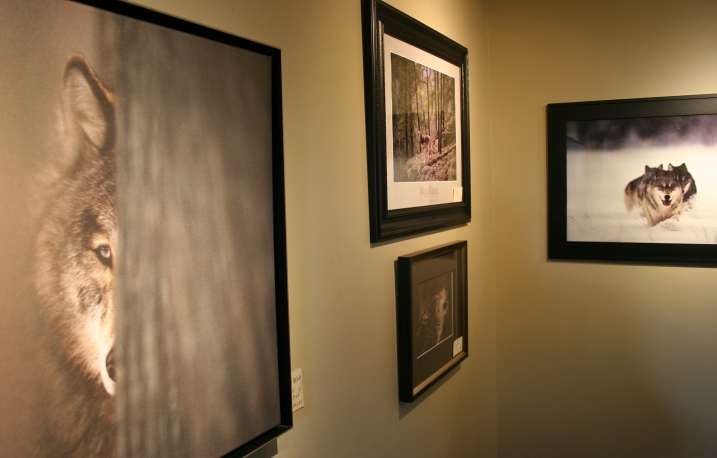 Brandenburg’s published books include Brother Wolf–A Forgotten Promise. The photographer says he swapped a hunting rifle for a camera and never tires of capturing an animal with his camera. The red fox , not the wolf as one would expect, is his favorite animal.

The gallery’s lower level offers a variety of images, but focuses on scenes from Minnesota’s northwoods, where Brandenburg now lives and works near Ely. Think mostly wolves. 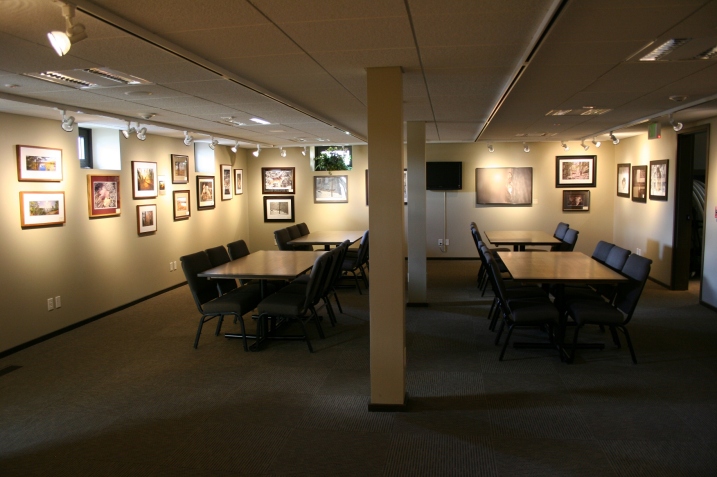 After meandering through the gallery, I contemplated not only the talent Brandenburg possesses as a photographer, but his deep knowledge of the natural world and the patience required to wait for the ideal light or for an animal’s arrival. To anticipate, to react or not, to click the shutter button at the precise moment takes a certain talent. And I was graced, for an hour, to walk in the light of such incredible talent. 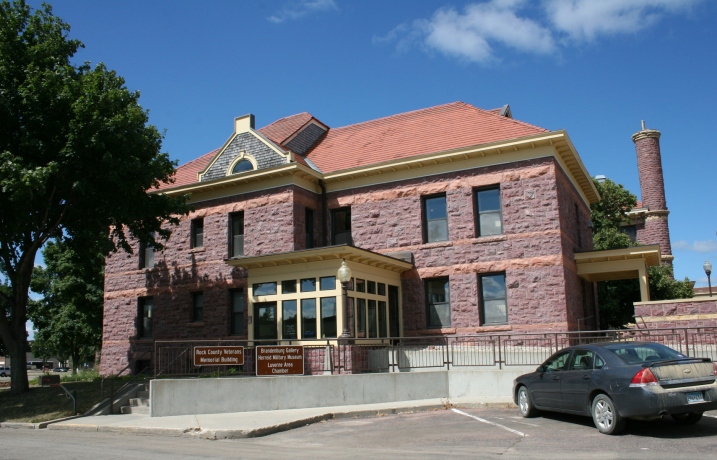 The gallery, located in the Rock County Courthouse square.

FYI: The Brandenburg Gallery, 213 East Luverne St., is open from 8 a.m – 5 p.m. Monday – Friday and from 10 a.m. – 5 p.m. Saturdays. There is no admission fee. Note that I had difficulty finding the gallery as the address does not seem to coincide with the street on which the gallery is located. When you see the courthouse, you’ve found the gallery, located right next door in the old county jail, now the Rock County Veterans Memorial Building. The building is actually along McKenzie Street. 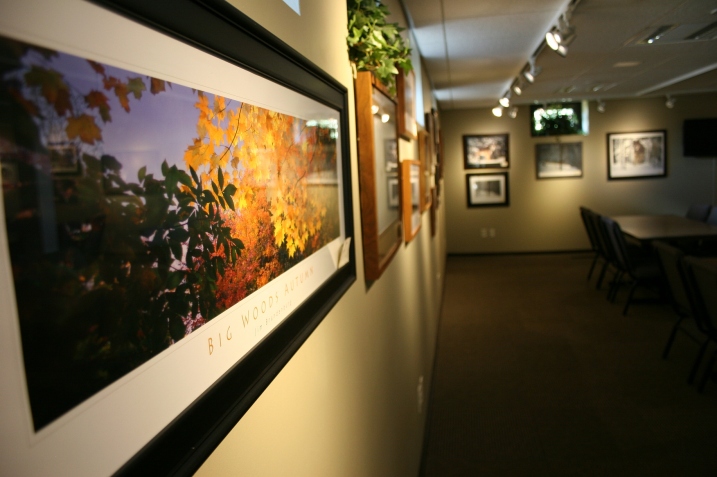 A familiar scene to me, autumn leaves photographed in the Big Woods of Minnesota, within 20 miles of my home.

Also, note that I asked permission to photograph in the gallery and was given the OK to do so.

FYI: Please click here to read my first in a series of posts, on Blue Mounds State Park, from the Luverne area.

“WAIT. DON’T GO,” I requested as he was about to pull away from a stop sign in Owatonna.

Through the drizzled windshield, my eye caught a flash of red letters against the backdrop of a moody blue grey sky. 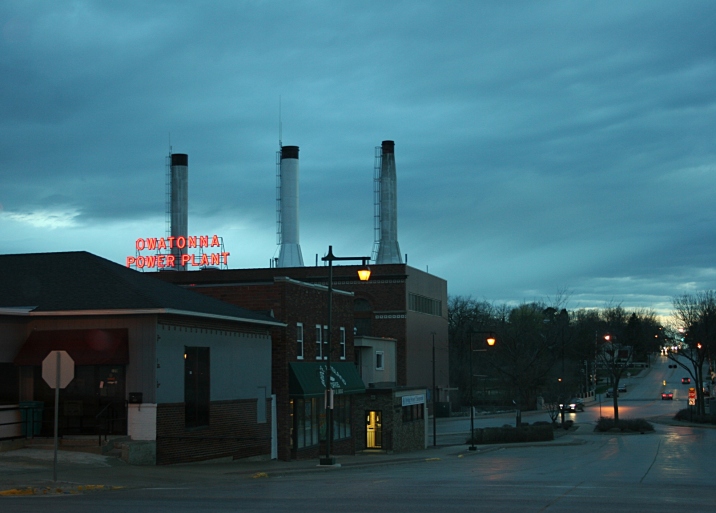 I wanted a photo of the dreamy scene—the bright signage atop the Owatonna Power Plant building, the warm glow of lantern street lights, flashes of taillights and headlights, the patch of light through a glass door, the reflection of light upon wet pavement.

In that precise moment, the frame unfolding before me was all about light, a gift to any photographer. There was no hesitating. Hesitation, for a photographer, equals regrets. 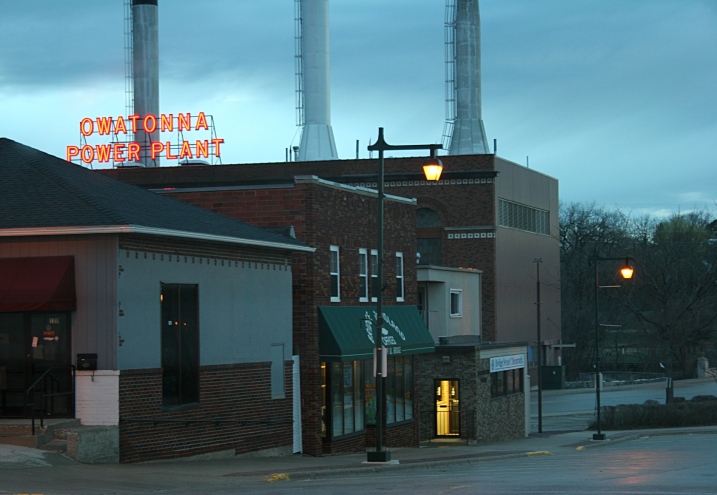 A closer shot of the 75-year-old signage.

And so my husband, who understands, or at least pretends to understand, held foot to brake, flipped on the windshield wipers and allowed me to fire off several shots before continuing through the intersection.

Unexpected opportunities like this, to photograph an iconic landmark in remarkable light, are to be embraced.

FYI: The sign atop the Owatonna Power Plant recently underwent a transformation as the neon letters were replaced with LED technology. Also, as a result of damage caused by a September 2010 flood, the building has been repurposed into office space. The power plant has not been used as an energy source for years with Owatonna Public Utilities purchasing its electricity instead from Southern Minnesota Municipal Power Agency.