For the love of homemade sausages, smoked meats and more April 19, 2010

In the Mankato/New Ulm area, Schmidt’s Meat Market draws locals and travelers alike off busy U.S. Highway 14 into its Old World shop in tiny Nicollet. Famous for its German style summer sausage, the meat market continues operation as a third-generation family business begun in 1947 by Gerhardt and Esther Schmidt.

Although I’ve never been to Schmidt’s, I’ve heard only great comments about the meat. The next time I head west, I’ll have to check out this popular stop.

In my area, Nerstrand Meats & Catering, in the even smaller town of Nerstrand—about 230 people compared to Nicollet’s 900—is the go-to place for meat. Here, the double smoke hams are the specialty at this fourth-generation family business founded in 1890.

I’ve eaten meat from the Nerstrand meat market and can attest to its outstanding flavor and quality.

The same goes for Pekarna’s Meat Market, another fourth-generation, family-owned business that I discovered while visiting Jordan in the southwest metro a month ago. Actually, I should credit my husband, Randy, for finding this delightful butcher shop/retail store. While I was wandering around looking at buildings in this historic Minnesota River town, he aimed straight for the meat market.

Current fourth-generation owner Greg Pekarna’s great grandfather started the business 117 years ago. It is clear to me that Pekarna’s has got a good thing going here, a conclusion I drew upon seeing the long line of customers waiting at the retail counter on a Thursday afternoon in late March.

Customer favorites at Pekarna’s include smoked pork sausage, ring bologna and baby back ribs. Randy picked up brats and bacon. When I microwaved the bacon, I didn’t even have enough grease to sauté onions for the potato soup I was preparing. Now that’s something. As for the brats, I am not a brat fan, but Randy may convince me to try a Pekarna’s brat. 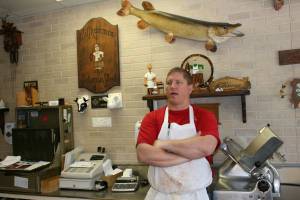 Greg Pekarna behind the counter at a meat market with old-fashioned, kitschy charm.

While at Pekarna’s I chatted a bit with Greg and his friendly employee Sandy Schmitz. I thought, initially, that they were the married co-owners. When I stated as such, the two burst into laughter and Greg joked that would not work, except he said this in stronger words which I won’t repeat here.

Speaking of words, I noticed two signs in German behind the meat counter: “Wilkommen Pekarna’s Meat” and “Jawohl Gute”

I asked for the English translation of Pekarna, assuming it is of German origin. Wrong. Perkarna means “bakery,” in Czech, Greg tells me. Like I said earlier, this guy has a sense of humor.

And like many small-town Minnesota butchers, Pekarna offers high-quality products and great customer service, trademarks that have allowed his business to survive and thrive for more than a century. 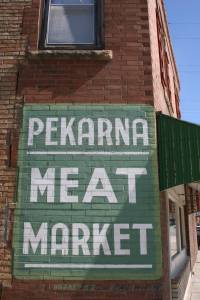 Have you discovered a great small-town meat market like Pekarna's Meat Market?

IF YOU HAVE a favorite small-town meat market, submit a comment to Minnesota Prairie Roots. Tell us why this is a favorite stop. Do you like the sausage, the brats, the bacon? Let’s hear your testaments to small, family-owned meat markets.