Raising awareness about domestic violence because I care & so should you October 28, 2016 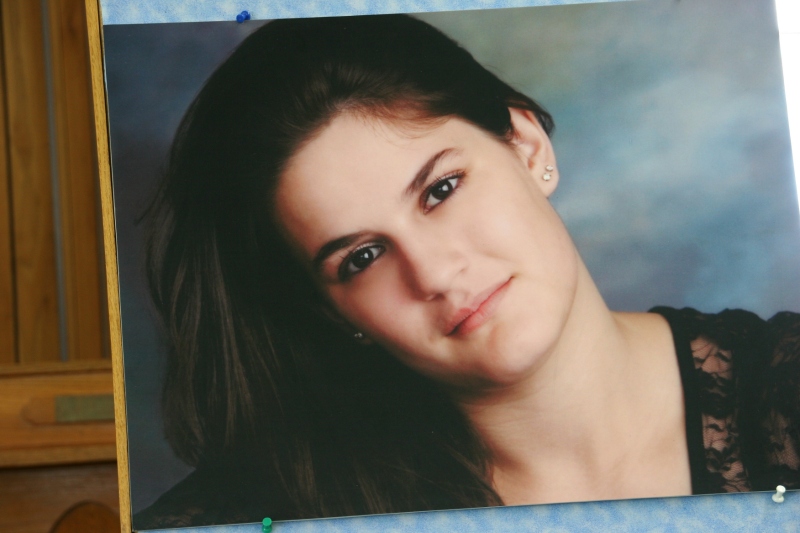 Northfield, Minnesota, native Becky Kasper was only 19 and a student at Arizona State University when her abusive ex-boyfriend killed her on April 20, 2013. Her murderer is serving a total of 30 years in prison followed by a life-time of probation with mental health terms. Read Becky’s story by clicking here. She died in a vicious act of domestic violence. Minnesota Prairie Roots file photo.

Domestic violence thrives when we are silent; but if we take a stand and work together, we can end domestic violence. —the National Network to End Domestic Violence 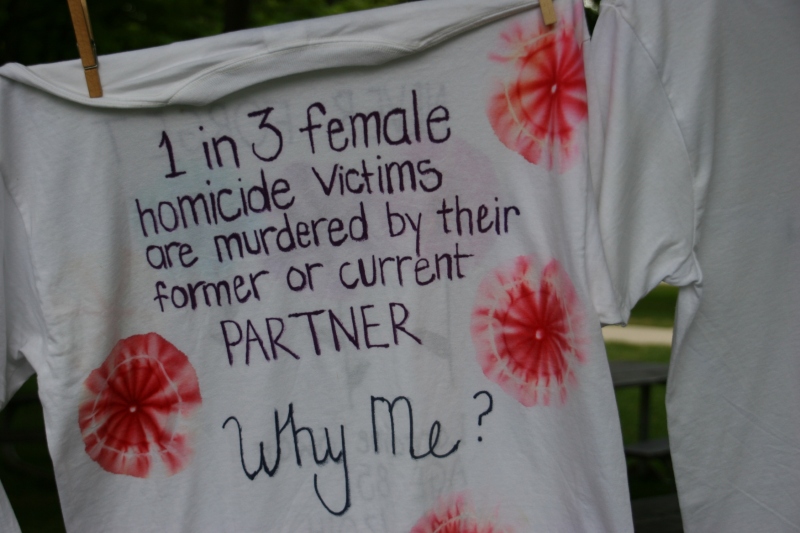 “Homicide” and “murdered,” strong and accurate words on a t-shirt that is part of The Clothesline Project from the Minnesota Coalition for Battered Women. Minnesota Prairie Roots file photo 2015.

Have you thought much about domestic violence? I’ve always thought the word “domestic” minimizes the crime, as if it’s less brutal, less meaningful, less harmful. It’s not. The emotional wounds, especially, run long and deep.

Photographed on the inside of a women’s bathroom stall at Lark Toys in Kellogg. Minnesota Prairie Roots file photo 2015.

Have you been impacted by domestic abuse/violence? If you answer, no, I’d be surprised. According to the National Coalition Against Domestic Violence, one in three women will be the victims of physical violence by an intimate partner during their lifetime. Victims of domestic abuse are as close as your next door neighbor, your co-worker, the woman worshiping next to you, your hair stylist, your friend, your niece, your college roommate…you just may not realize it. I can personally list about 20 women by name (family, friends and indirect acquaintances) who have been victims of domestic violence/abuse. Several of them died. Murdered by their abusers.

Are you in an abusive relationship? If you are, I want you to know that you do not deserve this. You are not somebody’s property. You are stronger than you think. There are individuals and organizations who can help you. Don’t do it alone. Leaving an abuser is dangerous; have a safety plan in place before you attempt to leave. You can break free. I believe in you.

Survivors are no longer birds in a cage. They are free. Minnesota Prairie Roots file photo.

Are you a survivor? I admire you and your strength. You are F-R-E-E. Your abuser can no longer claim you. 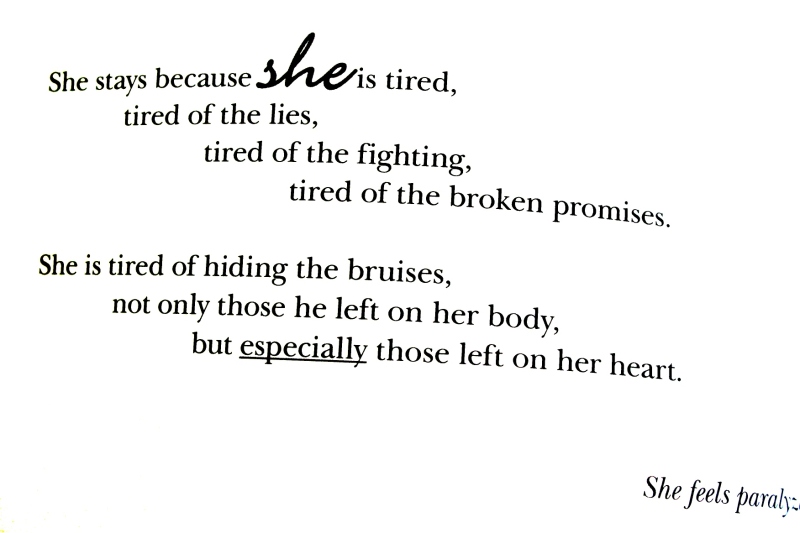 Through the years, I have written on this topic, and I will continue to do so. Because we need to speak out, to understand, to educate ourselves, to support victims and survivors, to hold offenders accountable, to care.

WHAT CAN YOU DO?

Domestic abuse is about control, manipulation and power. It can take the forms of physical (including sexual), mental, emotional, financial and spiritual abuse. Abusers want to “own” their victims; they do not.

If you are in an abusive relationship and are in immediate danger, call 911. Leaving an abuser is an especially dangerous time.

Seek help from a local resource center or safe house. Or call the National Domestic Violence Helpline at 1-800-799-7233. You deserve to be free.

For purposes of this article, I reference women as victims of domestic abuse, realizing that men and children are also victims.

Raising awareness: Much more than “just a domestic” October 2, 2014

SHE MAY BE YOUR DAUGHTER, your sister, your niece, your next-door neighbor, your friend or co-worker’s daughter. She may even be you.

You likely know someone who has been in an abusive relationship. Except you may not realize it. These victims, mostly women, may not bear the bruises or other physical signs of abuse. The level of abuse may not have reached that stage of a slap or a push or a hand around the neck. Or a threat to kill or to kill one’s self, which spoken by an abuser should be taken as seriously as the threat of homicide.

Domestic abuse isn’t solely (and sometimes never) about the physical. It’s first about emotional and psychological control and manipulation—the lies, the deceit, the charm, the promises/proclamations of change, the “I’m sorry; I didn’t mean to do that,” the pleading, the “I won’t ever do that again,” the intimidation, the excuses, the justification for placing a hand upon a woman.

Do you know families who have lost loved ones to domestic violence? I do. The daughter of a former neighbor. The niece of a sister-in-law and brother-in-law.

Do you know families whose loved ones have been in relationships with domestic abusers? I do.

Let’s stop for a moment. I wish domestic violence/abuse wasn’t termed as such. The word choice minimizes the crime. If a woman is killed by her husband or partner, it’s murder. Murder. If she’s physically harmed, it’s assault or attempted murder. You can agree or disagree, but the words “domestic violence/abuse,” for me, minimize the act as if a relationship lessens the crime, putting blame upon the victim.

Blame. Don’t blame the victim. Ever. If you think a woman can simply leave the man she loves, or thinks she loves, then you do not understand the very basic premise of domestic abuse. Control. Manipulation. Power.

Equally as important is remembering that you cannot “make” a woman leave an abusive relationship. That must be her decision.

October marks Domestic Violence Awareness Month. We each hold a personal responsibility to understand and educate ourselves about this crime. You need look no further than the court report in your local newspaper or to sports figures held in such (undeserved) high esteem to see how domestic violence against (mostly) women permeates our society. Maybe you need only look next door or in the mirror.

Donate monies to a local support center that focuses on assisting victims and/or survivors of domestic abuse. In my community, Ruth’s House of Hope, a shelter for homeless women and children located several blocks from my house; HOPE Center, a site offering support to those dealing with sexual and domestic violence; and Whispers of Hope, a faith-based healing center for young women, are always in need of financial gifts.

All three of those resource centers will benefit from an a capella concert fundraiser set for 4 p.m. Saturday, October 4, at River Valley Church in Faribault.

Or participate in a domestic violence awareness fundraiser like Margie’s Voice 5K Walk/Run, beginning at 8 a.m. Saturday, October 4, at the River Bend Nature Center in Faribault. Margie’s Voice honors the memory of Margie (Brown) Holland and her unborn daughter, Olivia. Roger Holland was sentenced to two terms of life in prison for the 2013 murders of his wife and daughter. Margie’s dad once lived across the street from me.

She may be your daughter, your sister, your niece, your next-door neighbor, your friend or co-worker’s daughter. She may even be you.

FYI: If you are in an abusive relationship, seek help now by calling a local resource center or the National Domestic Violence Hotline at 1-800-799-SAFE (7233). Click here to reach the national website for more information.