Give the gift of Minnesota writing December 20, 2011

ALRIGHT THEN, I’m going to put in a days-before-Christmas gift plug idea here for Lake Region Review, a Minnesota literary magazine. Even though the founders, term it a “magazine,” I’d call this 138-page volume a “book.”

Anyway, magazine/book/journal, whatever word you choose, it’s a collection of fiction, creative nonfiction and poetry by 27 Minnesotans, including me.

In my “This Barn Remembers” poem, you’ll read my memories of laboring in my childhood dairy barn on the southwestern Minnesota prairie. You may want to pull on your old boots as you muck your way through my true-to-reality poem. I tell it like it was, right down to “putrid piles of manure” and “streams of hot cow pee.”

I’m not going to choose a favorite piece of poetry or prose to highlight from Lake Region Review. But you’ll find regional writing from those as well-known as New York Times bestselling author Leif Enger to unknown college student Travis Moore in a collection that melds work by experienced and emerging writers. By the way, getting published in the Review was a competitive process. You’ll read quality writing here.

That all said, Lake Region Review would make an ideal gift for anyone who appreciates regional writing.

You can purchase the $10 volume in these Minnesota, and one North Dakota, locales:

Or click on this link for instructions on how to order. (Sorry, the anthology won’t arrive by Christmas.)

Thanks for supporting Minnesota writers like me (not that I earned any money from the Review—I didn’t). But I certainly appreciate readers who value regional writing.

IF YOU’VE READ Lake Region Review, I’d like to hear your review.

CLICK HERE to read a previous post I wrote about Lake Region Review and another Minnesota literary journal, The Talking Stick. 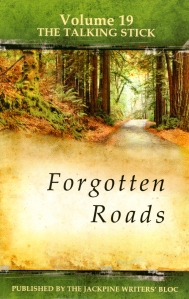 TYPICALLY WHEN I write poetry, I turn to my past, to childhood memories.

That’s evident by my poems published in three volumes of Poetic Strokes, A Regional Anthology of Poetry from Southeastern Minnesota:  “Abandoned Farmhouse,” “Prairie Sisters,” “Walking Beans,” “Saturday night baths,” and “A school without a library.”

Occasionally I deviate from that trip down memory lane. “Lord, My Rock” published in the fall 2004 issue of The Lutheran Digest and “Tribute to a Korean War Veteran” published in the May/June 2009 issue of Minnesota Moments magazine.

My latest in-print-poem also detours from my typical subject of childhood days, although it stays on the road of memories, albeit this one a heart-wrenching, emotional recent memory.

“Hit-and-Run” has just published in The Talking Stick, Forgotten Roads, Volume Nineteen, debuting this Saturday at a Book Release Party in the Northwoods Bank Community Room in Park Rapids.

The poem looks back to May 12, 2006, the day my then 12-year-old son was struck by a hit-and-run driver while crossing the street just a short distance from our home. Thankfully, my boy was not seriously injured. But the driver was never found and the memories of that horrible incident still linger. Now I’m sharing, in poetic verse, how that morning unfolded emotionally for me. Certainly, I have not forgotten this road.

Apparently my words resonated with the editors who reviewed the 200-plus poems submitted in this literary competition. “Hit-and-Run” was among the top seven poems selected by the editorial board for prize consideration by noted Minnesota poet Heid Erdrich. My poem earned an honorable mention.

“A terrifying imagery/memory,” Erdrich partially wrote in her evaluation.

If you would like to read my poem, the other winning poems and the fiction and creative non-fiction published in this latest collection by writers with a connection to Minnesota, check out the online purchasing options at The Jackpine Writers’ Bloc. The Park Rapids/Menahga-based group annually publishes The Talking Stick, which is sold by the Writers’ Bloc and several northern Minnesota bookstores.

I’ve read two of the past anthologies and I promise that you will enjoy some top-notch writing by emerging and established Minnesota writers. The Talking Stick has an excellent, long-standing reputation and I’m proud to be published in it.

If you’re a writer, consider entering the 2011 The Talking Stick competition. Submissions call for the 20th volume goes out in December with a March 1, 2011, submission deadline.

Finally, if you’re in the Park Rapids area this weekend, consider attending the book release party, which begins at 1 p.m. Writers published in The Talking Stick, Forgotten Roads, will read their works beginning at 2 p.m. No, I won’t be there as I have another commitment. But you’ll meet plenty of other Minnesota writers anxious to sell their books or compare notes on this journey we call writing.