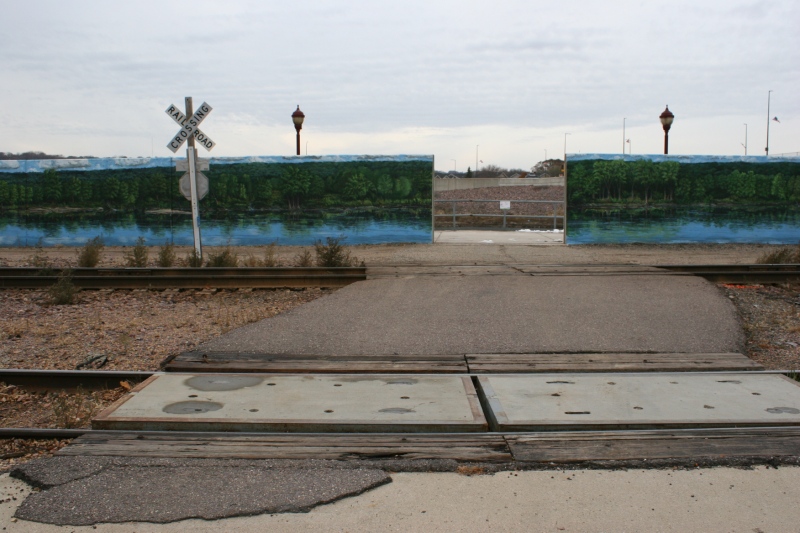 That’s my poem, viewed through the opening in the flood wall in downtown Mankato, Minnesota.

ALONG A BUSY STREET in the heart of downtown Mankato near Reconciliation Park, across a duo set of train tracks and then through an opening in a flood wall mural, you’ll find a work of literary art. Mine. A poem, River Stories. 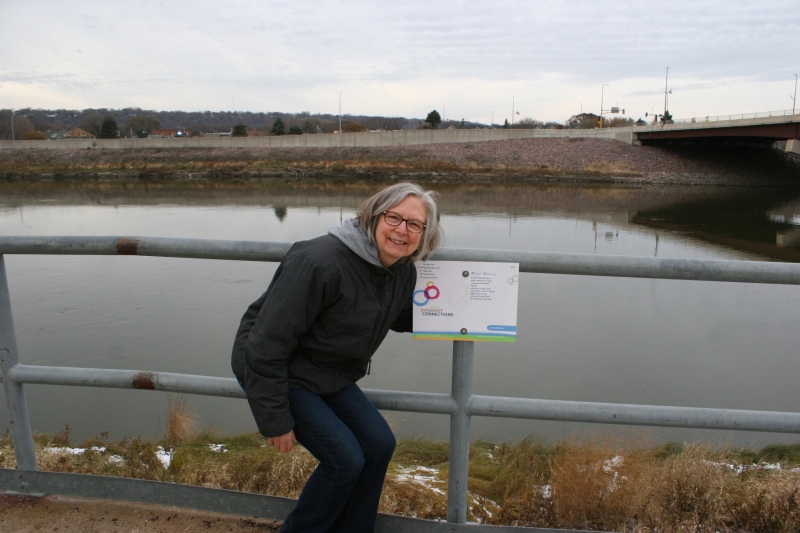 Me, next to my posted poem, River Stories. Photo by Randy Helbling 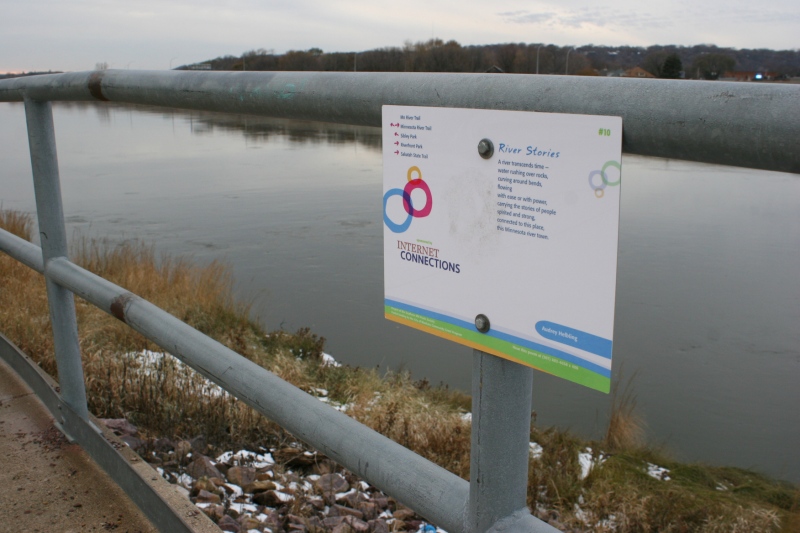 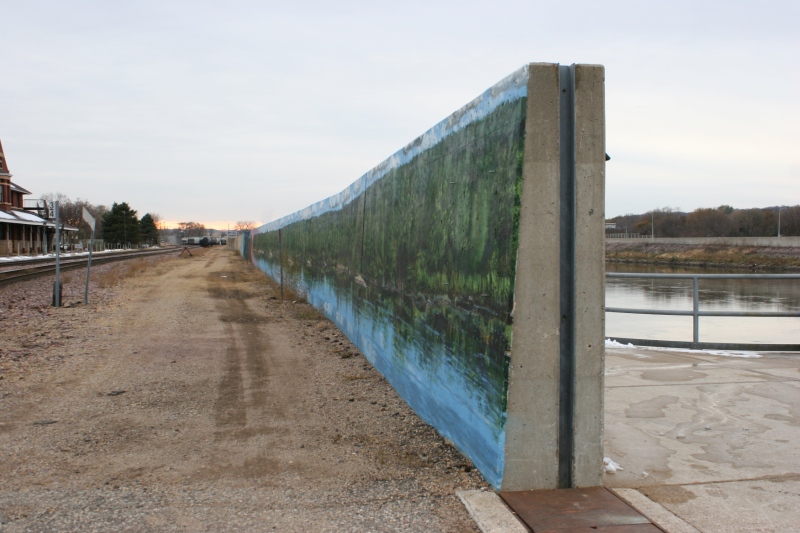 Photographed from the opening in the flood wall, the mural showcases the Minnesota River, to the right.

My poem was recently selected for inclusion in the Mankato Poetry Walk & Ride, a public art project that now boasts 41 poems posted on signs throughout Greater Mankato. This, my fifth poem picked in recent years for the project, will be displayed for the next two years at the site along the Minnesota River Trail hugging the river. I am honored to share my poetry in such an accessible way via this ongoing effort of the Southern Minnesota Poets Society. 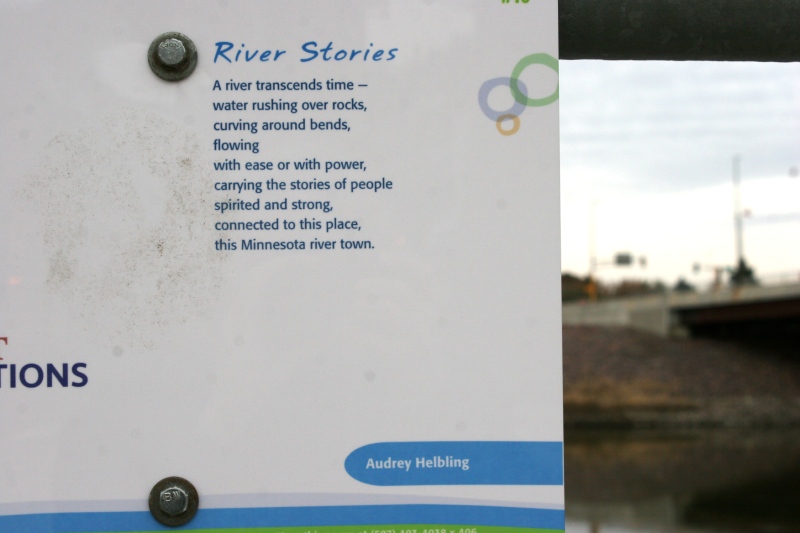 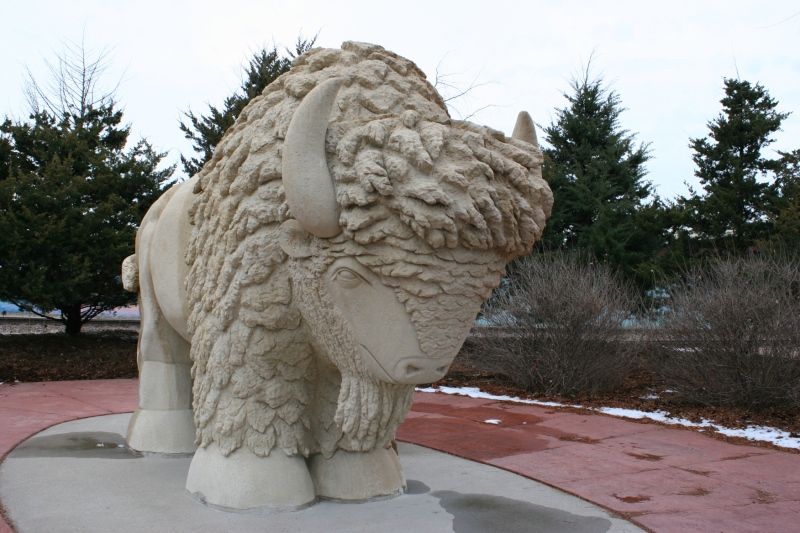 This 67-ton Kasota stone sculpture stands in Reconciliation Park. It symbolizes the spiritual survival of the Dakota People and honors the area’s Dakota heritage. The park is the site of the largest mass execution in U.S. history. The U.S. government tried and hung 38 Dakota here following the U.S.-Dakota Conflict of 1862. The location of my poem near this park seems fitting as part of the city’s river stories.

The Mankato Poetry Walk & Ride is a competitive process which challenges Minnesota poets to pen poems of no more than 18 lines with a limit of 40 characters per line. River Stories is short at only nine lines. Just like crafting copy for children’s books, creating poetry is among the most challenging of writing disciplines. Every word must prove its worth. Poetry has made me a stronger and better writer. 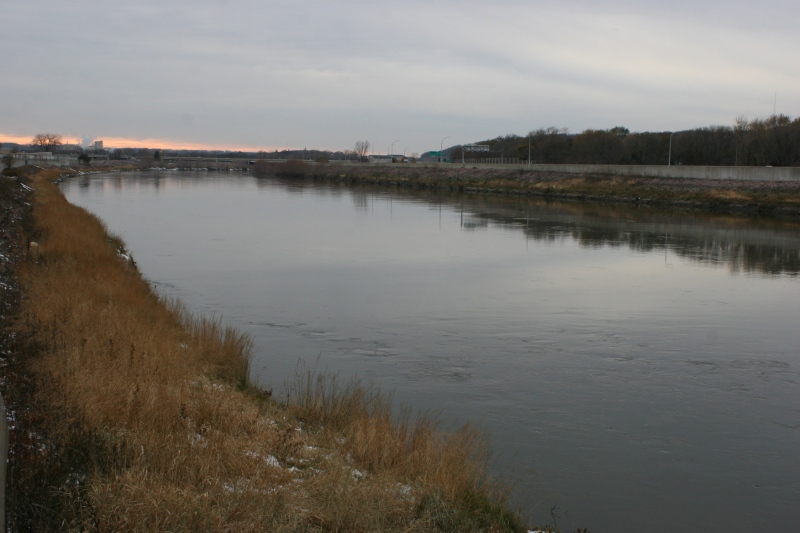 The Minnesota River, which runs through Mankato, inspired River Stories.

In writing poetry, I often reflect on my past and on a strong sense of place. Rural. My previous Mankato Poetry Walk & Ride poems include Cornfield Memories, Off to Mankato “to get an education”, The Thrill of Vertical and Bandwagon.

THE NATIONAL WEATHER SERVICE confirms what many Minnesotans had already figured out. Several tornadoes touched down during a massive storm system that began near the South Dakota/Minnesota border late Friday afternoon, July 1, and swept as far east as northwestern Wisconsin.

In my home area of Redwood County, two tornadoes were confirmed—both in the northwestern section of the county.

According to the NWS Chanhassen office, an EF-1 tornado with maximum winds of 95 – 105 mph began approximately six miles west of Vesta and continued for some 21 miles to the northeast. The maximum half-mile wide twister moved across Belview, which saw the most widespread tree damage in the surveyed area. The tornado then crossed the Minnesota River and ended two miles into eastern Renville County. Click here to read my previous post on the storm damage in Belview. 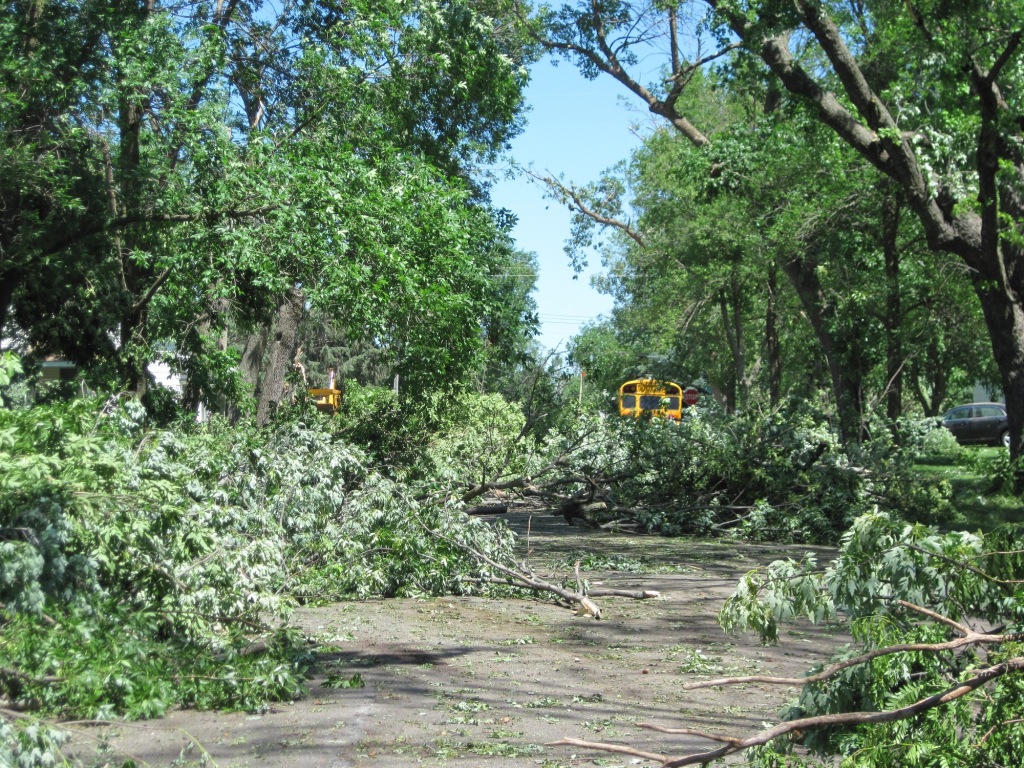 Trees blocked the street north of the Belview City Park following the tornado that passed through this Redwood County community of 375. Photo courtesy of Merlin and Iylene Kletscher.

The second EF-1 Redwood County tornado just nipped the northwestern corner of the county traveling a 2 ½-mile path. The tornado hit the farm of my cousin, Marilyn Schmidt, and her husband, Dan. To see the damage there, click on this post published yesterday on Minnesota Prairie Roots. 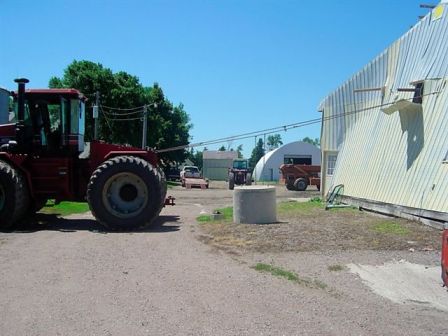 This tractor rigged with chains holds up a wall of a shop on Dan and Marilyn Schmidt's Wood Lake area farm. The building was severely damaged by Friday's twister. I'm showing this photo specifically for the reader who yesterday questioned how a tractor could hold up a wall. Photo courtesy of Heather Rokeh.

Three other tornadoes were confirmed in southwestern Minnesota—the most-damaging an EF-2 in Tyler with winds estimated at 115 mph. Check out the storm assessment of this 3-mile long tornado in Lincoln County near the South Dakota border by clicking here onto the NWS Sioux Falls website.

You’ll also find information there on an EF-1 twister that struck the Ruthton area in Pipestone County with wind speeds of 100 – 110 mph.

Strong winds, not a tornado, apparently caused the damage in my hometown of Vesta. The Chanhassen office of the NWS lists the storm there as “a series of downbursts” with wind speeds of 90 – 100 mph. Destruction in Vesta included dozens of downed trees, a roof partially-lifted from St. John’s Lutheran Church (my home church), smashed grain bins, damage to the elevator and more. To learn more about the damage in Vesta, read my previous blog post by clicking here or click here to read a story published in The Redwood Gazette. 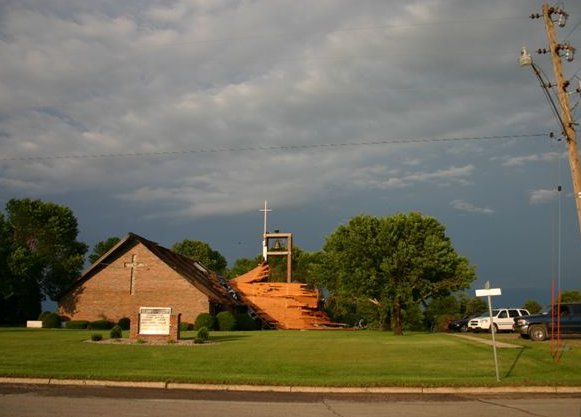 St. John's Evangelical Lutheran Church in Vesta with the roof half ripped off by strong winds during the Friday afternoon storm. Photo courtesy of Brian Kletscher.

Check out the two NWS websites for maps, photos and more detailed information on the storms and the resulting damage.

Also visit the Belview Blue Jays Facebook page, where you’ll find photos of storm damage and other information from Belview.

IF YOU HAVE INFORMATION and photos you would like to share of storm damage, please submit a comment and I will follow-up with an email to you.

Based on my blog readership yesterday and Tuesday, interest in the southwestern Minnesota storms remains high. Yesterday Minnesota Prairie Roots blog views totaled 1,129, my highest daily total since launching this blog. On an average day, I get around 400 views. 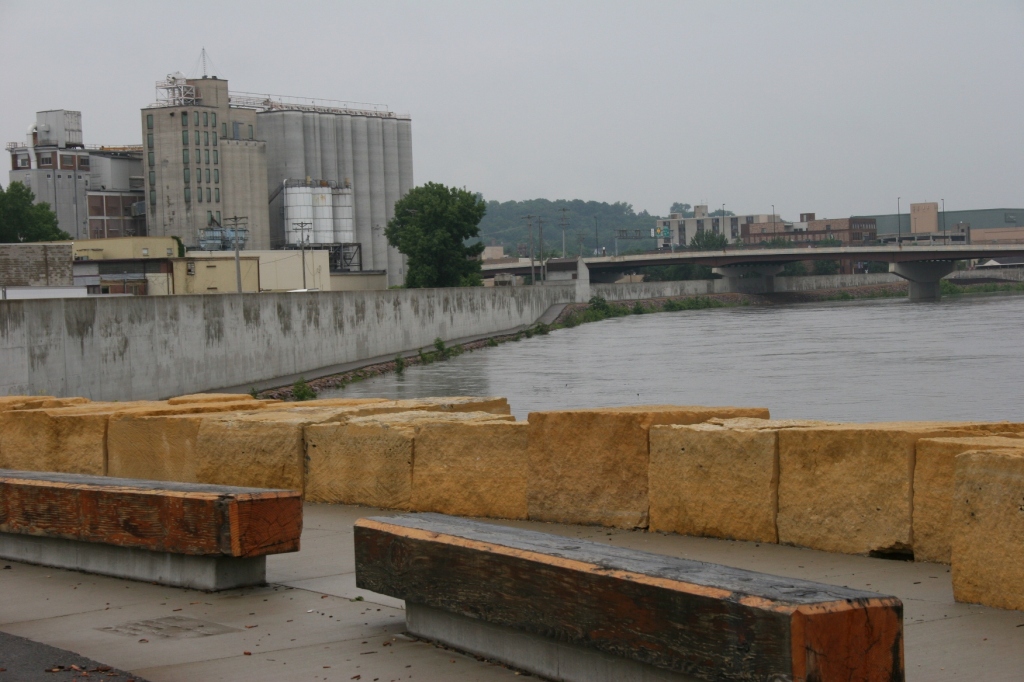 A view of the Minnesota River as seen from Riverfront Park, looking toward downtown Mankato.

THE MANKATO PARK SEEMS, in many ways, an ideal setting for poetry.

The usually playful Minnesota River bumps against the land here, acting on this Saturday afternoon like a willful, unruly child.

On the other side of Riverfront Park, across the tracks, historic buildings stand like forlorn children, neglected, waiting for someone to care.

I have come here at this late afternoon hour to read the poetry imprinted upon cement. Occasionally the sky spits rain at me as I follow the gray sidewalk which mimics the gray day. 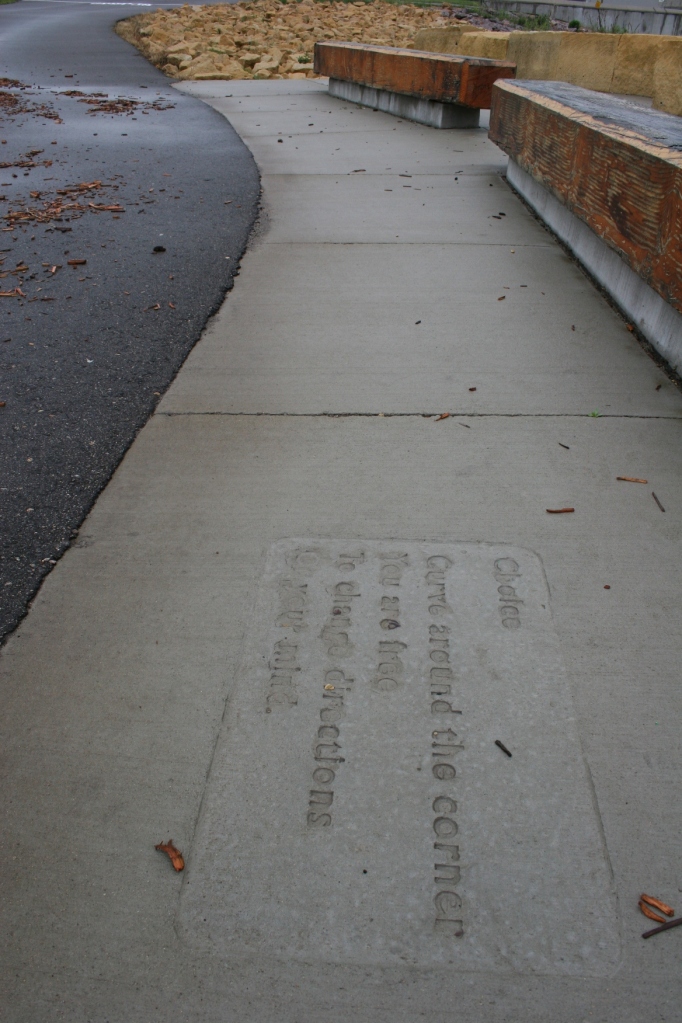 "Curve around the corner/You are free/To change directions/Or your mind," reads this poem by Marlys Neufeld of Hanska.

Here, the river rests its elbow

before it turns north to meet

the father of them all.

Here we made 38 mistakes 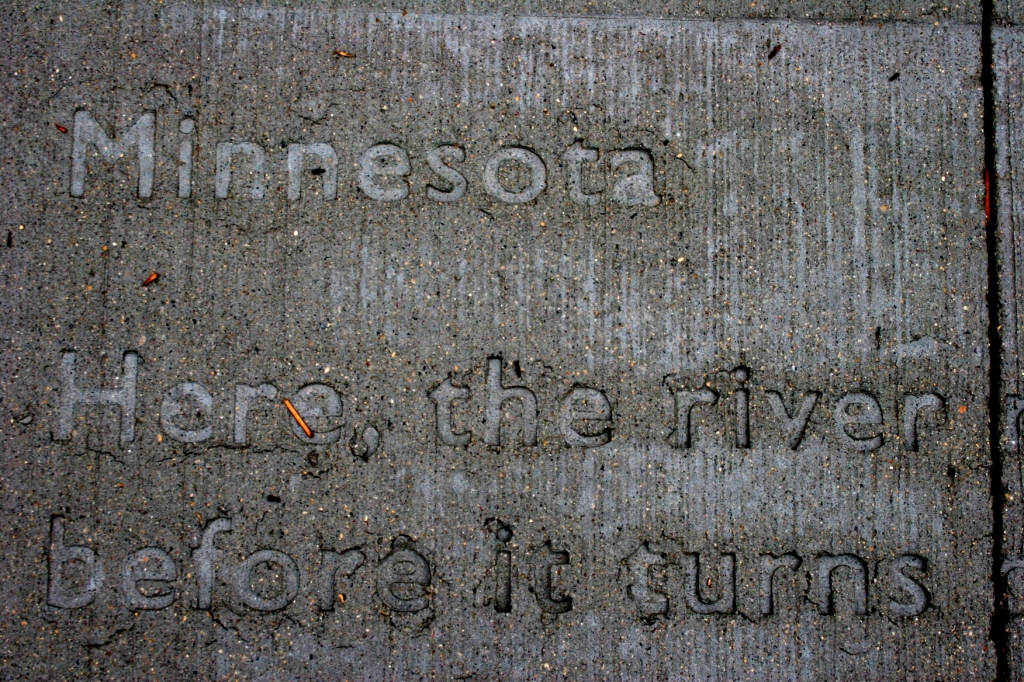 A snippet of the poem, "Minnesota." I've edited this image so that you can better read the words. The poems are, unfortunately, a bit difficult to read because of a lack of color contrast between the letters and the cement.

The poem by Ikars Sarma of Mankato refers to the hanging of 38 Dakota here on December 26, 1862. A heavy thought to match the heaviness of the sky, the raging of the river, the anger that still simmers over this shameful moment in this city’s history.

of the not so perfect 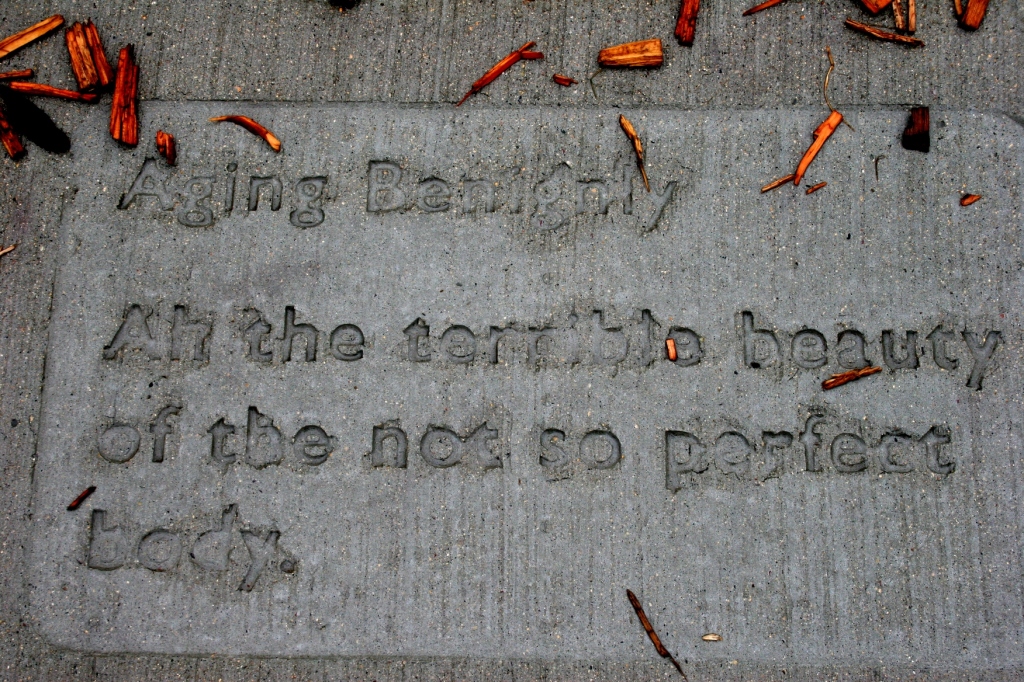 Nearby kids scramble up a rock wall as I struggle to lift my aging bones from the sidewalk where I have bent close to read and photograph Chambers’ poem.

Then I laugh at the words penned by Mankato resident Yvonne Cariveau:

I slowly open the lid. 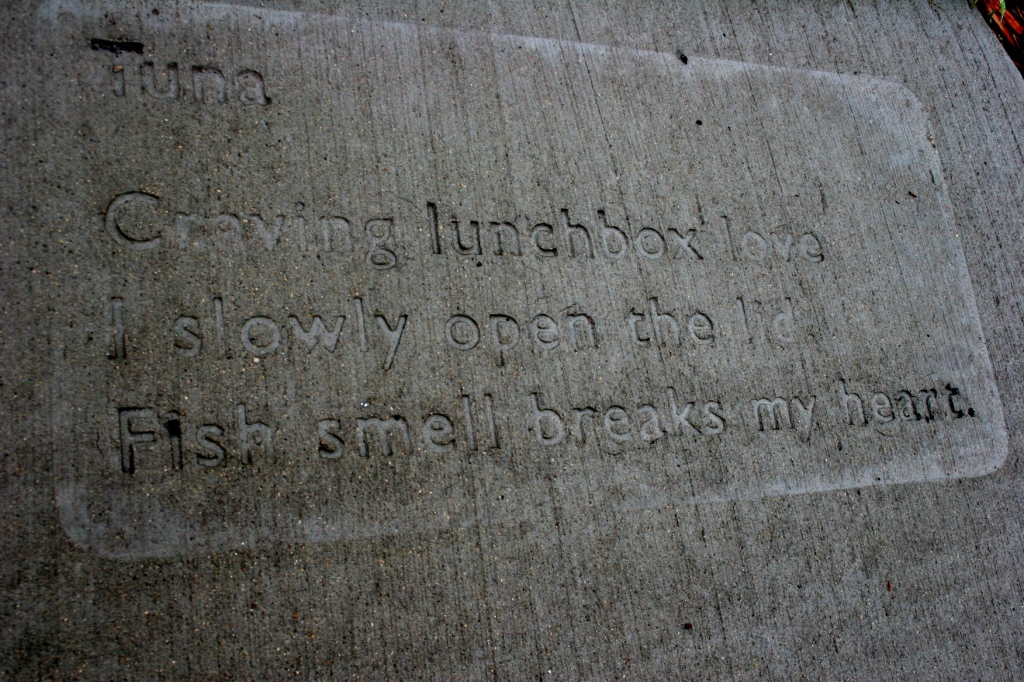 The poem that causes me to remember all the tuna I ate during my last two years of college.

Exactly. I ate too much tuna in this college town between 1976 and 1978. I could write my own poem about cramming tuna sandwiches while cranking out stories at the Mankato State University (I still can’t call it Minnesota State University, Mankato) student newspaper, The Reporter.

Cariveau’s writing reminds me of those years so long ago when I was young and only beginning my journey into the poetry of life. 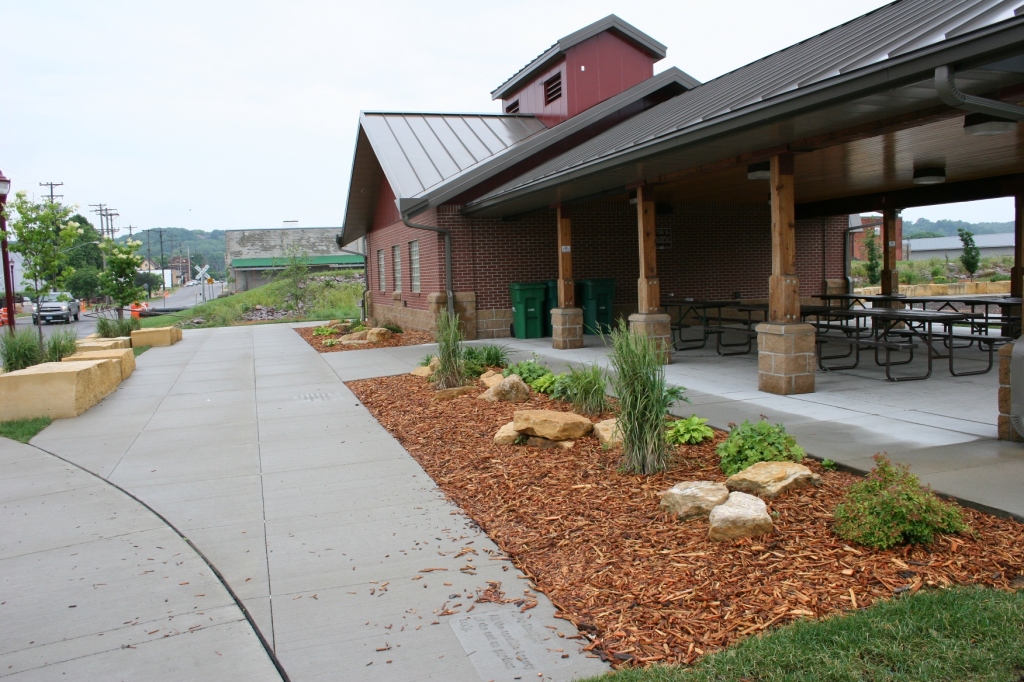 WordWalk poems are imprinted on the sidewalk circling this restroom/shelter facility at Riverfront Park in Mankato.

FOR MORE INFORMATION about Mankato’s public sidewalk poetry, WordWalk, click here and here. At least two other Minnesota cities, of which I am aware, have sidewalk poetry: St. Paul and now Northfield.

WHAT’S YOUR OPINION on sidewalk poetry? Do you like it, or not? Would you like to see more such public poetry in Minnesota communities? Why or why not? 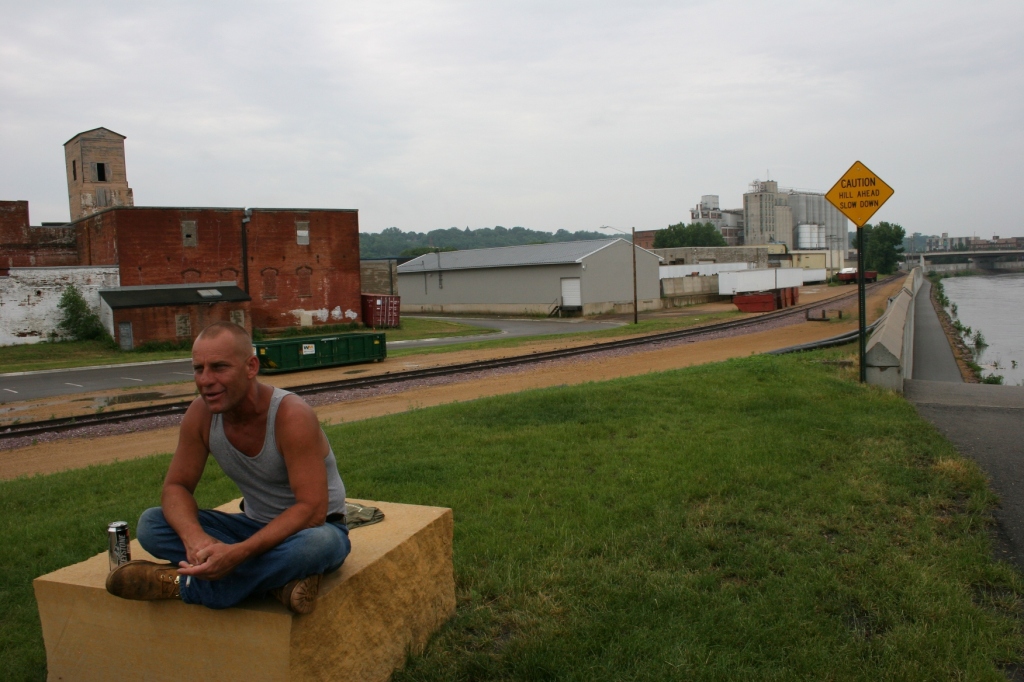 I’LL NEVER SEE THIS GUY again, this man in the muscle shirt with hair shaved scalp-close, fingers cradling a cigarette, a can of Keystone Ice nearly knocking at his knee as he slumps, cross-legged, on a block of Kasota stone by Riverfront Park in Mankato.

I wonder about his life, but don’t ask. Have he and his two buddies, passing the time nearby on their own blocks of hard, hard stone, had hard lives? I can almost see it in their eyes, imagine their lives. Jobs lost. Relationships broken. Regrets. Bars. Beer and cigarettes. Maybe whiskey and women.

But I don’t pry, and only he—the guy with the Keystone Ice—volunteers any information, speaks to me after I approach the trio because I see a photo opportunity in a man and his dog, brick buildings and a riverside railroad track. My eyes sweep across the scene, pushing the view into the lens of my camera, into these images that tell a story.

Rugged life in a river town. A blue collar man’s grimy, steel-toed work shoes. Elevators. Train tracks leading away. Peeling paint. Boarded-up buildings which The Ice Man wishes were torn down and which I tell him should be refurbished. 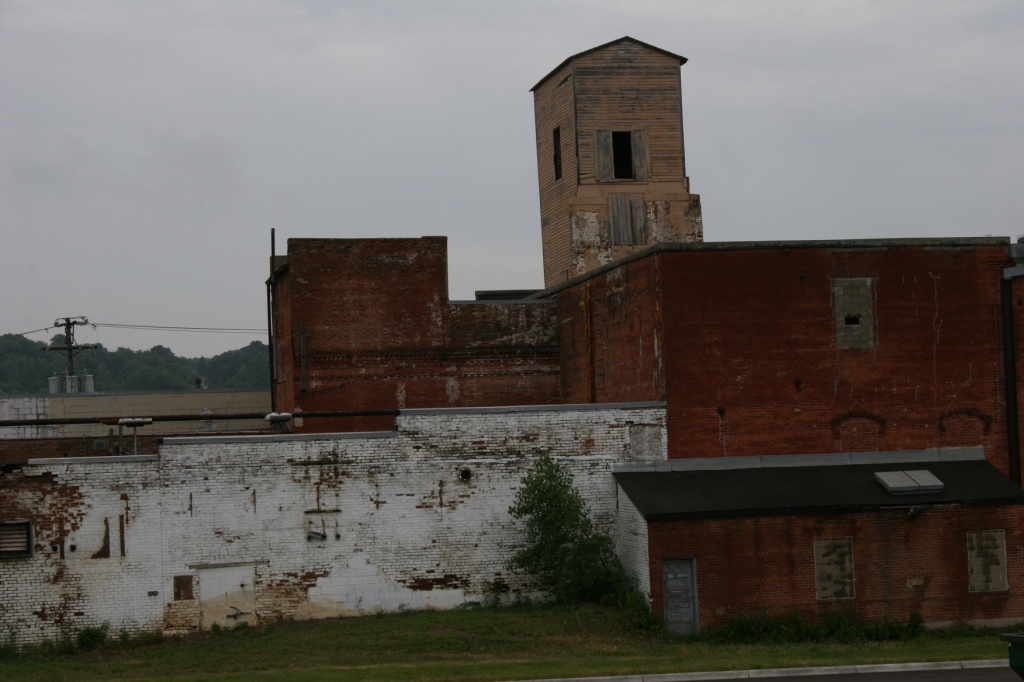 We disagree. But he still smiles a smile as wide as the manic, muddy Minnesota River raging past the park.

He tells me then, after I snap a series of photos, that he can’t take his dog—a service dog, he claims, and says he has the card to prove it—into Riverfront Park. Dogs are banned from some Mankato parks and this is one of them. 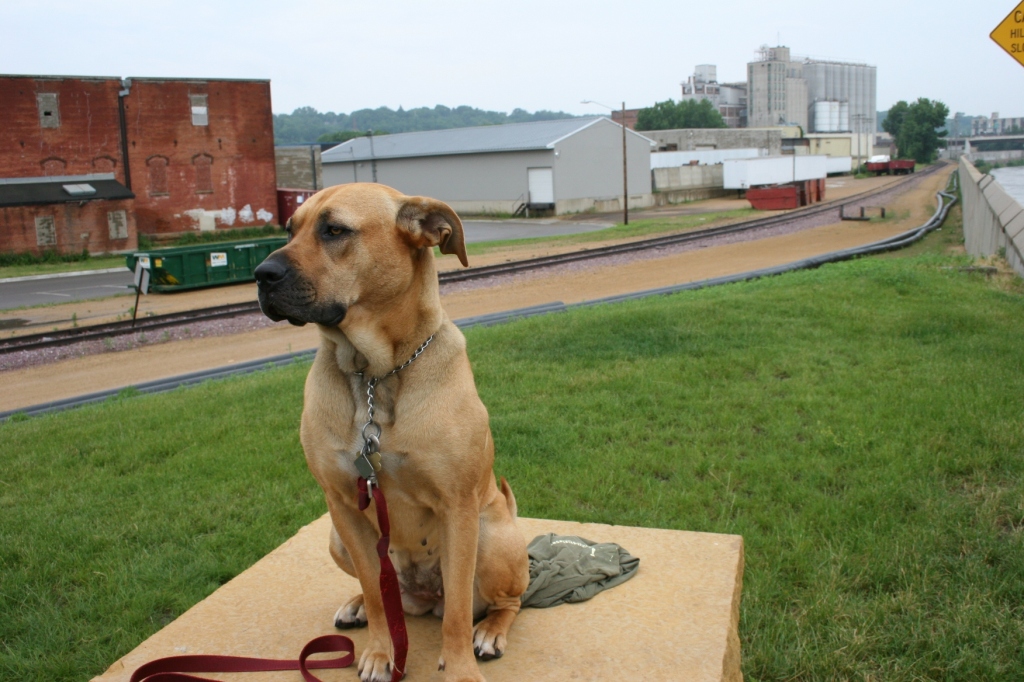 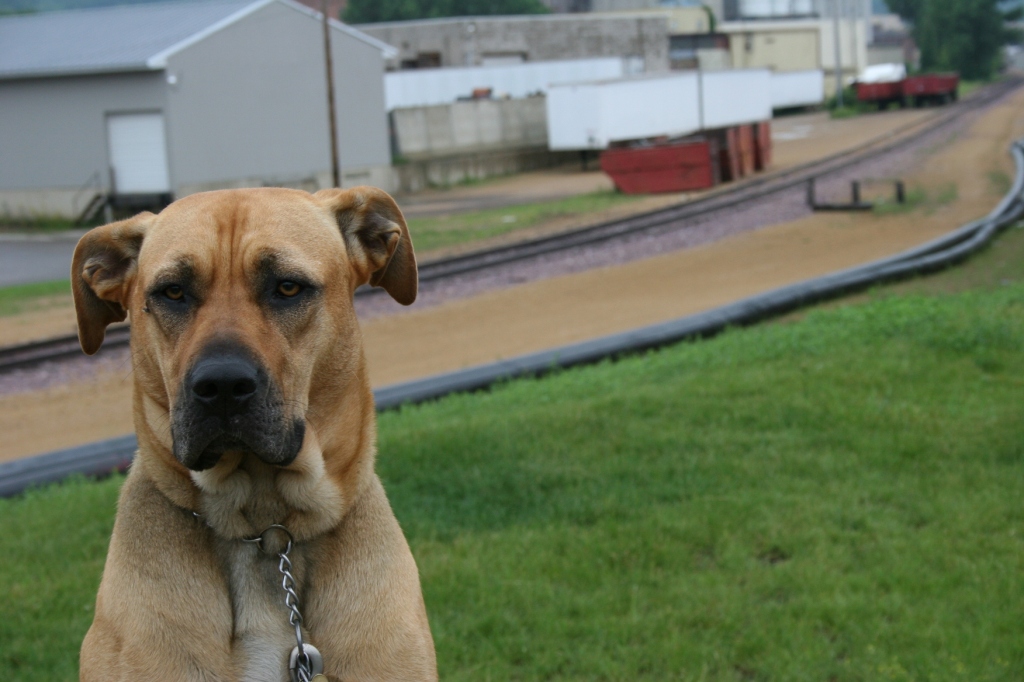 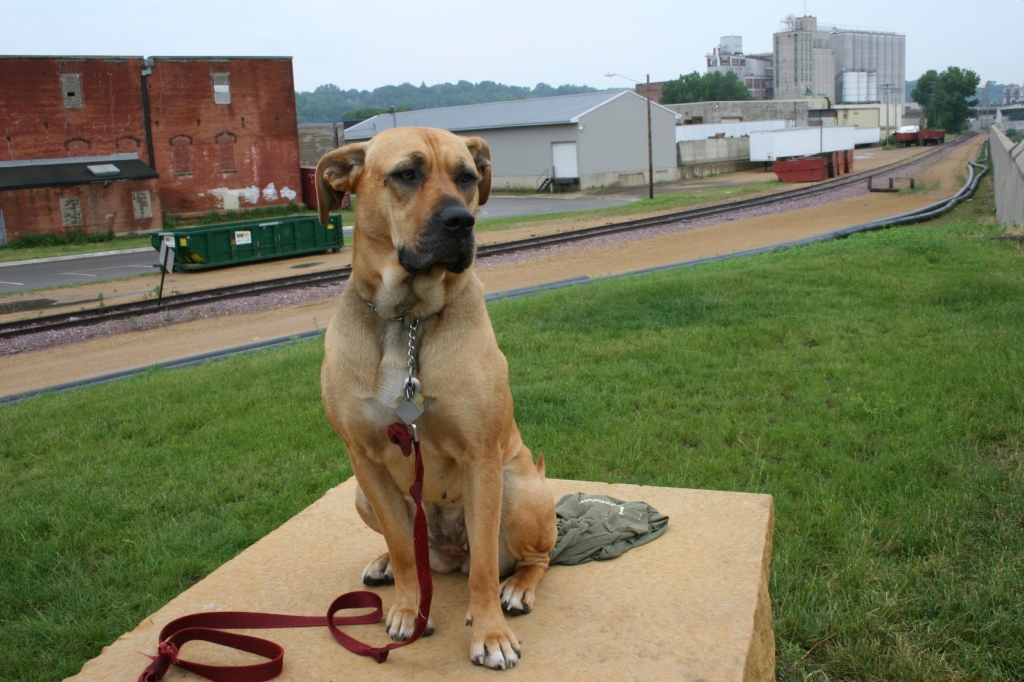 He suggests I photograph his dog next to the white line and words sprayed onto the tar: NO PETS IN PARK.

But then I reconsider, give The Ice Man his defiant moment. As his dog struggles to cross the line into the park, he tugs on the leash, holding her back. He’s already told me how, a day earlier, he hasn’t crossed the line to hear a $15 outdoor concert staged here. Instead, he’s followed the trail nearer the venue site, listened to the music from there. He’s clearly proud of his evasive, I’ve-outsmarted-them tactic. 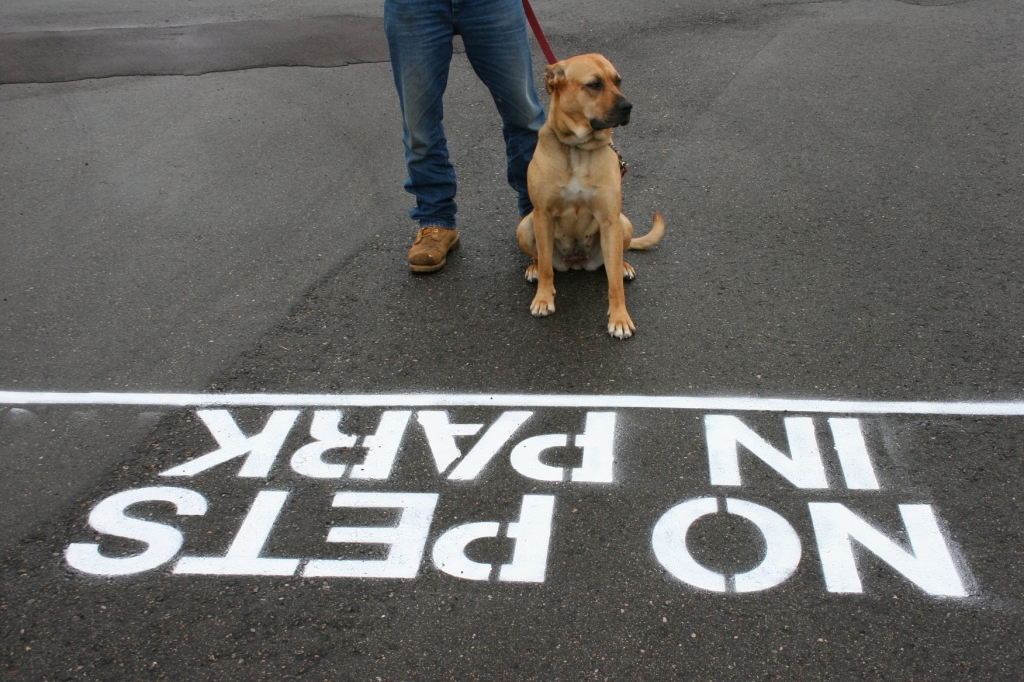 Then we part ways. I continue reading poetry imprinted upon a sidewalk circling the park’s trail head building. He returns to his hard stone to swig his Keystone Ice beer and smoke his cigarettes.

His life is so different from mine. Yet, for five minutes we’ve connected and the poetry of his life shows in these images of The Ice Man and his dog. 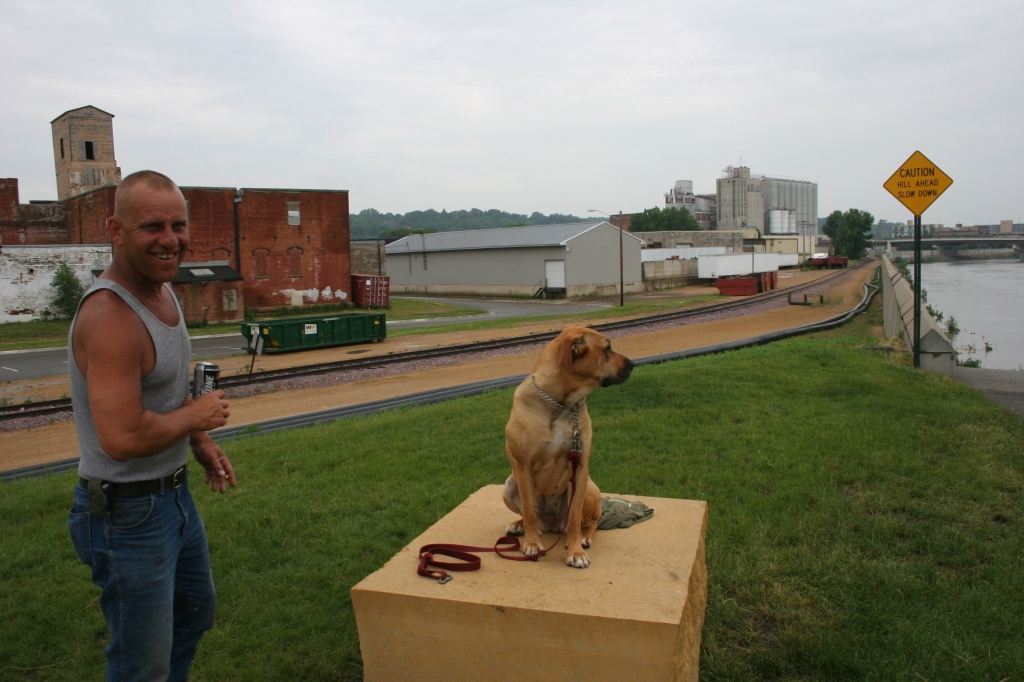