An Irishman refutes a German’s claims to being Irish March 27, 2010

THAT MY IRISH uncle would respond to a post I published last week does not surprise me. He didn’t exactly believe my claim that “even a German can be Irish on St. Patrick’s Day.”

So, I figured, in order to maintain family harmony, I would publish Uncle Robin’s rebuttals.

However, first I must tell you that my uncle claims to have a mischievous leprechaun, Murphy, who is his fun-loving Irish guardian angel.

“Murphy, as his name suggests, is behind everything that goes wrong and he ensures that things go wrong at the worst possible time,” Robin tells me. “However, Murphy is also responsible for everything that goes well or better than expected – and he generates a ‘reward,’ so to speak, for the manner in which adversities are handled.

Here are the claims I made in a St. Patrick’s Day blog post followed by Murphy’s, ummmm Robin’s, responses:

ME: “My Grandma Ida often said, ‘The Irish and the Dutch, they don’t amount to much.’ I have no idea why grandma said this, but, if you’re Irish or Dutch, please forgive this German woman. I didn’t believe here then; I don’t believe her now.”

ROBIN: “He (Murphy) laughed off your grandma’s admonition that ‘The Irish and the Dutch – they don’t amount to much’ by noting that ‘Dutch’ in fact is a typical German misspelling of ‘Deutsch’!”

ME: Next, I claimed to have the luck of the Irish because I searched for four-leaf clovers as a kid.

ROBIN: “The shamrock is not clover and never has four leaves.”

ME: I figured since I eat sauerkraut (made from cabbage), that defines me as part Irish on St. Patrick’s Day.

ROBIN: “No respectable Irish man or woman would ever admit to eating sauerkraut.”

Well, Uncle Robin, you’ve certainly disputed any possibility that your 100 percent German niece, me, could ever be Irish.

ON THE SOMEHWAT serious side, though, I boasted in my earlier post that Uncle Robin created the drug Femara, which is used to treat breast cancer in postmenopausal women. I mean, not everyone has an uncle who developed a drug that saves lives. I’m proud of him.

Robin, in his humble Irish approach, tells me: “Murphy of course takes all the credit for Femara. I often wondered how this drug managed to get a name with a distinct Irish flavor (reminiscent of Connemara, Glockemara, etc.) and so I embedded its structure in a shamrock leaf.” 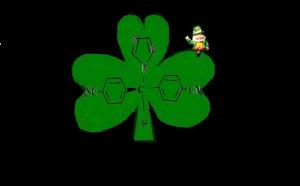 My uncle e-mailed this structure for the drug Femara, embedded in a shamrock. I assume that's Robin's leprechaun, Murphy, posing with his creation.

Now, since I am no chemist, like my uncle, I can only assume Robin, ummmm, Murphy, is not pulling some sort of Irish trick on me.