What does the future hold for the Tilt-A-Whirl January 7, 2011

A downtown Faribault mural depicts the evolution of the Tilt-A-Whirl.

IN AN IRONIC TWIST, or something like that, today’s Faribault Daily News featured this top headline:

I read this within 45 minutes of posting “These businesses have been in Faribault for how long.”

I’m scraping egg from my face. But I had no idea, none, nada, that one of Faribault’s oldest businesses is, according to the newspaper article, in the process of being sold to Larson International, Inc., of Plainview, Texas.

You may not be familiar with the name Sellner Manufacturing. But I bet you have ridden the firm’s Tilt-A-Whirl, which is manufactured just blocks from my Faribault home. The company has been making this American icon amusement ride since 1926.

For several years now, Sellner Manufacturing has been struggling with financial difficulties. I’ve read the foreclosure notices in the newspaper. I won’t speculate as to why this happened. I simply don’t know.

I don’t know, either, what this means for the future of the Tilt-A-Whirl. Will it be around for another 85 years?

The Mural Society of Faribault created and placed the Tilt-A-Whirl mural on the side of Jim's Auto & Tire this past fall. It is among five murals in the downtown area.

These businesses have been in Faribault for how long

EVER SINCE The Faribault Daily News “2010 Year in Review” special supplement published last week, I’ve been meaning to write this post.

Now, you might think that I would summarize the top 10 stories in my southeastern Minnesota community. OK, I will tell you that a late September flood ranked as the top local news event of 2010, according to the newspaper.

A successful season by the Faribault High School Emeralds danceline rated as number 10, although I find that rank as a bit of a stretch for a top 10 news story (no disrespect to the Emeralds intended).

While I found the summary of my community’s top news events to be interesting, I was most impressed by the advertising content. Yes, advertising.

All of the ads in this supplement highlight the number of years that local businesses have been in business. Some have been in Faribault for more than 100 years. Those are impressive numbers in today’s economy and impressive personally to someone like me. My hometown of Vesta in southwestern Minnesota was founded in 1900, while Faribault was founded in 1852. Do the math. That’s a 48-year age difference.

Since those triple digit numbers wowed me, I decided to do a little online research into several of the long-time Faribault businesses that advertised in the special section.

Here’s the scoop on some of our oldest businesses, starting with 134-year-old Parker Kohl Funeral Home, 607 N.W. Second Avenue. As you would guess, the business name reflects the merger of two funeral homes (in 1978). Most interesting to me is the fact that Flora Ray Parker joined her dad, David Ray, in operating the Ray Funeral Home, which originated in the 1870s. Later, her son, John Parker, would join the Parker Funeral Home. Was it common for a woman to operate a funeral home back in the day? 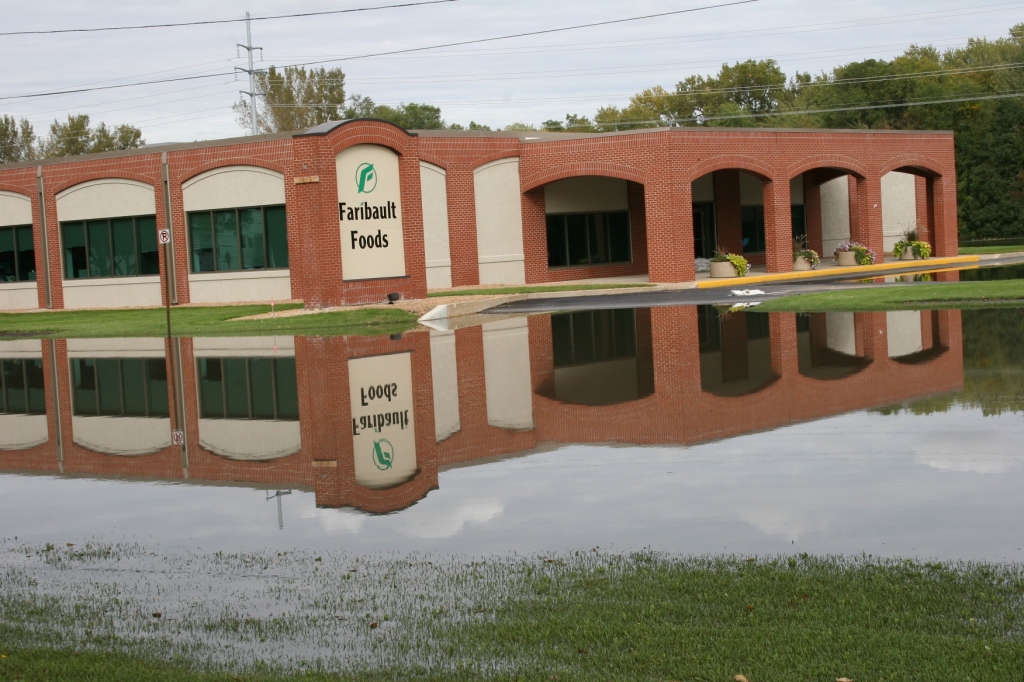 The offices of Faribault Foods, surrounded last September by floodwaters.

Moving on, I clicked onto the Faribault Foods website and found a detailed timeline showing how this 115-year-old canning company has evolved. “Faribault Foods started in 1895 as a vegetable company. We were known for small-sized, juicy corn kernels, tiny ‘petits pois’ peas and a willingness to do everything we could to please our customers,” I read.

Today, according to the company website, Faribault Foods produces canned vegetables; sauced, refried and baked beans; kids’ and family style pasta; soup; chili; and organic and Mexican specialties. In 2007 it became the largest producer of canned organic soups in the country. I did not know that.

Farmer Seed and Nursery, 818 N.W. Fourth Street, has been around for 122 years and is the historic-looking building you’ll see driving along Minnesota Highway 60 from the west toward downtown Faribault. I didn’t find any history on the website except for this statement: “Serving the needs of America’s gardeners for more than 120 consecutive years.”

Yes, this is the company with the seed catalog that Minnesotans (and other northerners) drool over in the dead cold of winter as they plan their gardens and wish for spring.

Many more businesses have been around for six or seven decades. Really, that’s impressive, isn’t it?

If you’ve never been to Faribault, come and check out our community sometime. We have a beautiful, historic downtown with interesting shops, like Burkhartzmeyer Shoes, where they fit your feet for shoes, place the shoes in a box and tie the box with cotton string. They’ll even add a lollipop. That’s what I call old-fashioned service from a third-generation family business of 61 years. 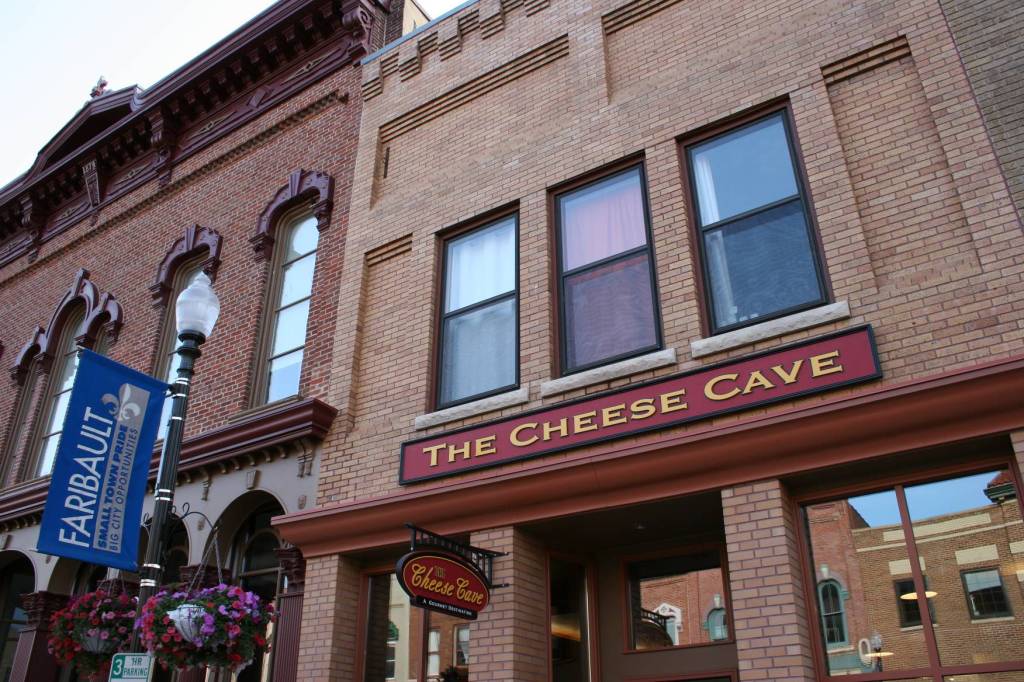 The Cheese Cave serves a limited menu and also sells gourmet products, including cheeses made right here in Faribault and aged in sandstone caves along the Straight River two blocks away.

We also have a cheese store, a candy store, antique and specialty shops, a coffee shop, many ethnic and other restaurants, an art center, thrift stores…enough really to provide you with a day of shopping and entertainment in a historic downtown with a decidedly small-town charm and ambiance.

Banadir Restaurant, the red building in the center and one of Faribault's many ethnic eateries, is next door to Sweet Spot Candies, where you can buy homemade and other candies and homemade ice cream. 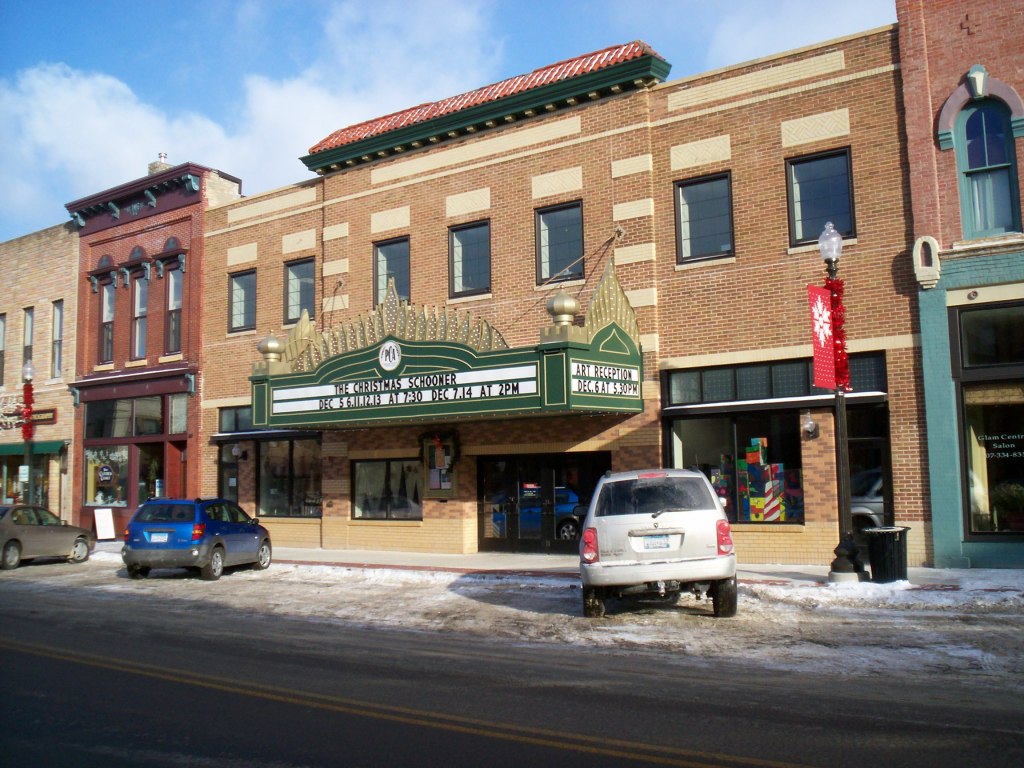 The Paradise Center for the Arts is the cultural hub for theater and art in a historic downtown theater.

A mural, one of several in the downtown area, promotes historic Faribault.