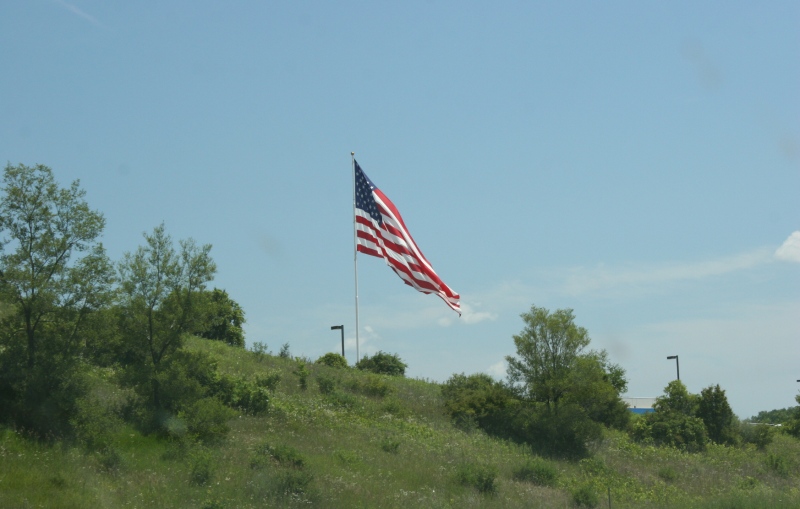 An over-sized American flag flies along Interstate 90 near Madison, Wisconsin, on the Fourth of July.

MADISON, WISCONSIN on the Fourth of July is, if anything, noisy. Loud with fireworks. We sat on the balcony of our son’s apartment in the Atwood neighborhood the evening of July 4 and watched and listened as fireworks spread across the night sky. Left. Right. And in between. No fireworks from an organized official public show, but from neighborhoods.

A pop-up fireworks tent in Mauston, where we stopped for a picnic lunch.

Randy and I arrived in the capital city in the early afternoon, passing numerous fireworks businesses en route. A temporary tent in Mauston. A permanent fireworks building in some other location along Interstate 90 that I can’t recall. 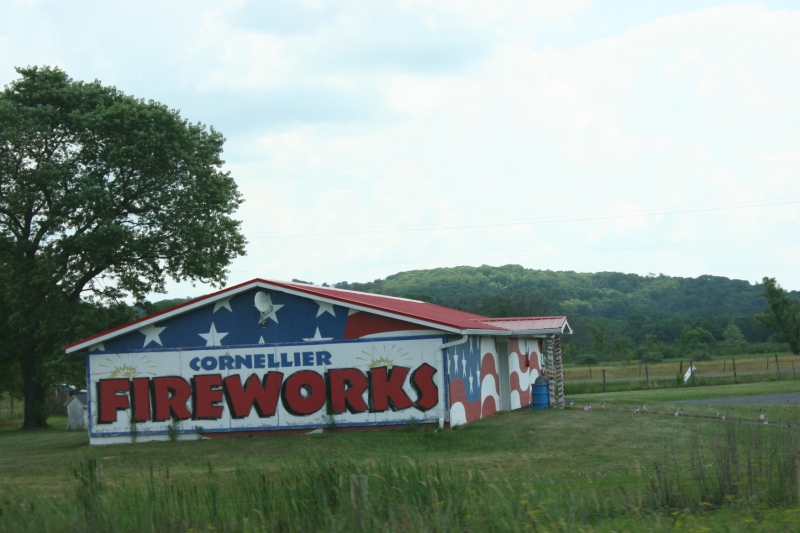 A large-scale fireworks business just off I-90 near Madison.

Wisconsinites like to do it up big with their fireworks, brats, beer and cheese. 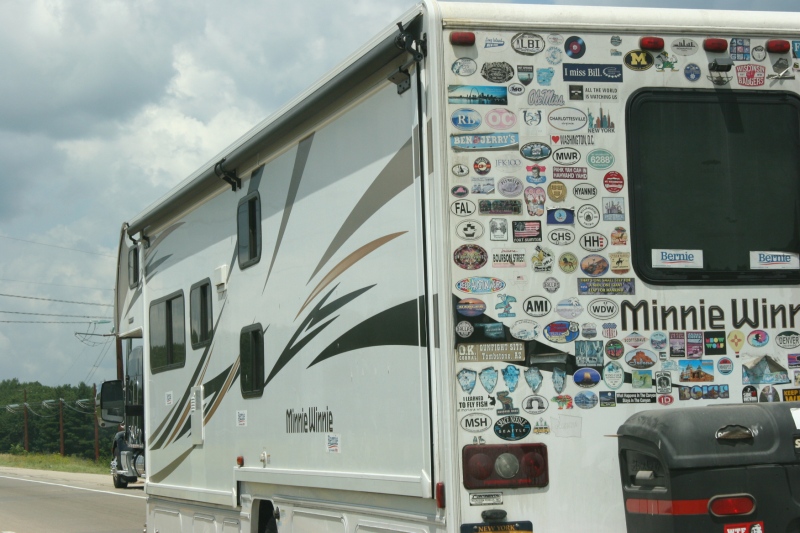 Traffic volumes were heavy along I-90 and the city of Madison thrumming with people and traffic. You could forget for a moment or ten that we are still in the midst of a global pandemic except for the people wearing masks and the electronic road signs advising travelers to “buckle up and mask up.”

A public service announcement flashes over I-90. I saw this message numerous times along I-90. Thank you, Wisconsin, for the reminder.

I appreciate the message. And I appreciate, too, the many people I saw in Madison wearing face masks, showing their care and concern for others. We could learn a thing or two from the good folks of Madison about the importance of wearing masks. (At least here in many parts of greater southern Minnesota. Thank you, Rochester, Mankato and Winona, Minnesota, for mandating mask wearing. St. Paul and Minneapolis, too.)

IF YOU GAVE ME THE CHOICE of visiting a big city or a small town, I would always choose rural over urban. In small towns, I feel the most comfortable, the most rooted. I grew up in rural southwestern Minnesota, on a farm a mile south of Vesta, current population around 300.

On a back country gravel road, we met this farmer who had been raking hay.

Because of that upbringing, I find myself drawn to the countryside and to small towns. To explore. To photograph. To see for myself what defines these rural places.

That same tractor in the side passenger mirror. I love following gravel roads.

On a recent Sunday, Randy and I did a day trip along back country roads, eventually landing in nearby Elysian, population around 600. We picnicked in a lakeside park shelter before driving downtown. There we walked on a beautiful June afternoon, taking in the aged buildings and sharing our thoughts about them.

Once the home of the Elysian Co-op Creamery.

Sometimes we have grand ideas. Like turning the “for lease” former creamery into a brewery. Because, well, we like craft beer and the building looks like an ideal fit for a brewery in this community that draws summer visitors to area lakes. 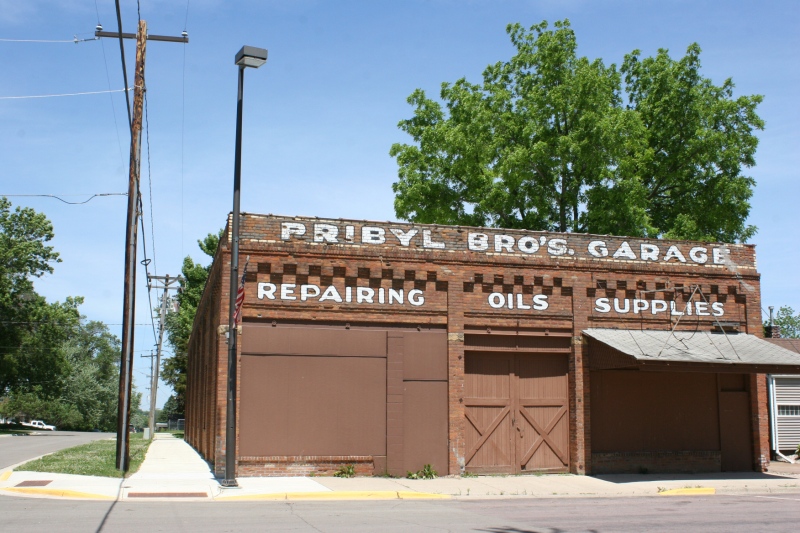 One of my favorite buildings in Elysian is Pribyl Bro’s Garage, its current use unknown to me. But I love the look of this place, which reminds me of a winery in Cannon Falls. There’s another idea.

If you’re interested in joining the local volunteer fire department…

Further down the street, we paused to read signage posted on the windows of City Hall. I’m always drawn to these local postings, which reveal a lot about a town. I focused on the notice seeking firefighters. Minutes earlier we’d watched the fire department use a tanker truck to fill a residential above-ground swimming pool. 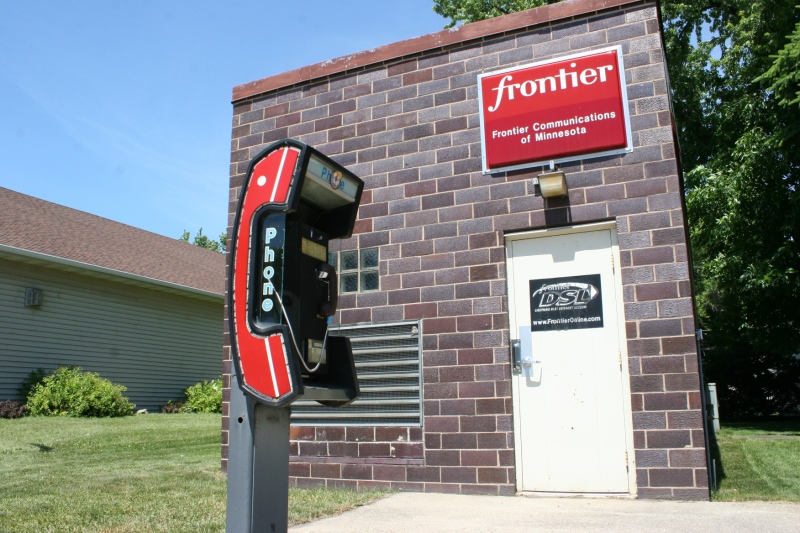 Next, we spotted an outdoor public pay phone, seldom seen in this day of cellphones. It stands outside a stunning mini brick building. (I noticed a lot of brick buildings in Elysian.) Randy pulled out his cell and dialed the number listed on the pay phone, thinking it would ring. It didn’t.

Just one more shot to show the small town setting.

Then he grew weary of waiting for me. “How many pictures do you have to take of a phone?” he asked. Clearly he doesn’t think like a photographer excited about discovering something not often seen. But, he had a point. I framed a few more images and moved on.

Gracing the window boxes at a realty office, if I remember correctly.

We paused on a street corner, me to photograph window boxes crammed with Fourth of July themed décor and flowers. Elysian typically hosts a big holiday celebration. But this year’s events are scaled down to fireworks at 10 pm on Friday, July 3, and the Fourth of July Boat & Pontoon Parade around Lake Francis from noon until 1 pm on July 4. The town sits along Lake Francis. City of Elysian and Lake Francis residents can join the parade, which offers generous cash prizes for creative decorating and enthusiasm by boaters. Plus, the Elysian Area Chamber of Commerce has sponsored a Light-Up July Fourth event encouraging residents and businesses to decorate their homes, businesses, trees, shrubs and more with red, white and blue lights. Judging is Friday with cash prizes awarded.

Many small towns have corner bars, so it seems.

From those window boxes, I shifted my camera lens to Fischer’s Corner Bar.

There are a lot of old brick buildings in downtown Elysian.

And then I swung my Canon to the right and Pamela’s Pet Shop. Probably a bank at one time, we decided, before turning to retrace our route back to the van.

Now that hair salons have reopened in Minnesota, I expect this place is busy.

From across the street, I stopped to photograph Trailside Trims, appreciating the bicycles propped out front with flower baskets, a nod to the many bikers who pass through and stop in Elysian while using the Sakatah Singing Hills State Trail. Elysian is the midpoint for this 39-mile paved recreational trail running between Faribault and Mankato. 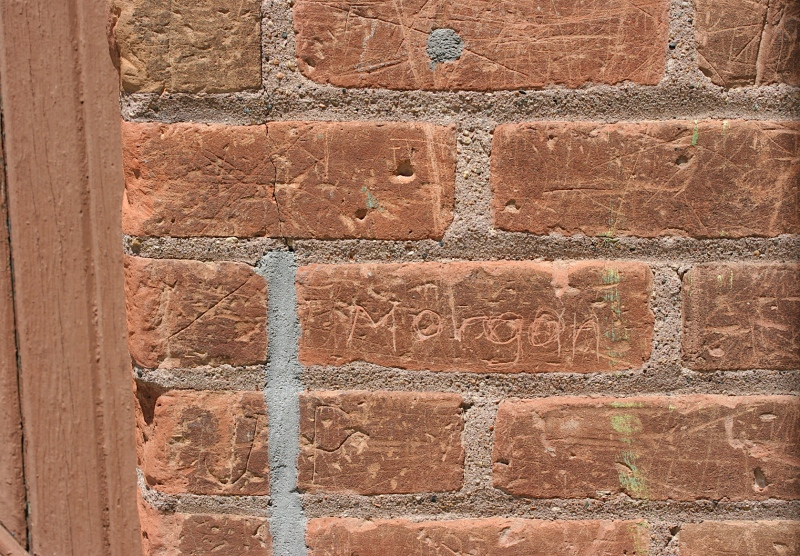 I don’t advocate defacing public or private property. But I do find graffiti interesting.

And, finally, I paused one final time. To study the many names etched into the brick of Pribyl Bro’s Garage. Morgan, whoever she is, wins with her name appearing most often. By writing her name here, Morgan is now part of the history of this place, this small town. 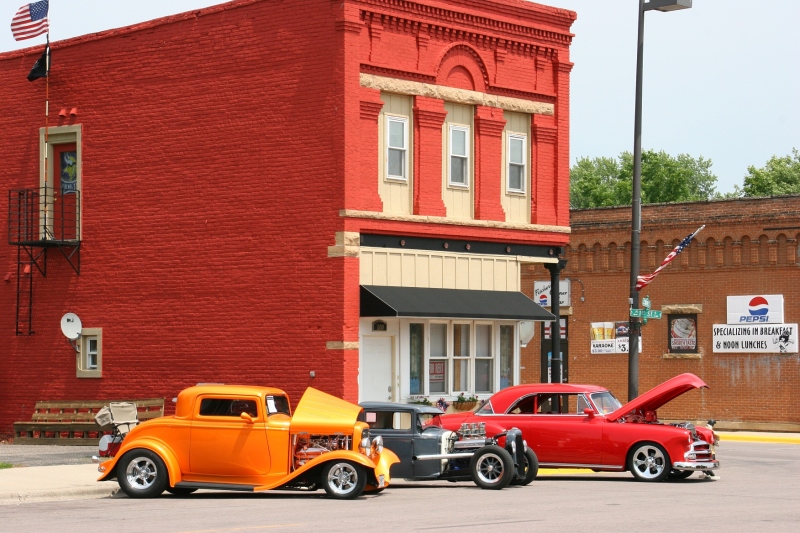 FOLKS IN SMALL TOWNS have a way of working together to create community events that are truly remarkable. It’s that sense of ownership, that strong connection to place, the importance of tradition and the love of community and family which, I think, prompt locals to continue year after year with time-honored celebrations like Elysian’s July Fourth weekend gathering.

Another view of the car show.

Sunday afternoon we drove through this southeastern Minnesota lakeside town on our return to Faribault from southwestern Minnesota. I noticed the Car Show sign along Minnesota Highway 60 and people gathered. So we stopped. While the husband perused the vintage cars, the son and I watched the Kids’ Pedal Tractor Pull and checked out the Trail of History.

As we were leaving, Miss Elysian royalty were handing out Car Show trophies.

The holiday weekend celebration was winding down when we arrived. So we missed a lot. Yet, there was enough to see that I’m enticed to return next summer. Events actually began June 26 with royalty coronations and end this Saturday with two triathlons.

Farme’rs Friends 4-H Club advertised its root beer floats on a vintage chalkboard along the Trail of History. When we ordered the floats, a woman scooped vanilla ice cream into red solo cups and handed us cans of root beer to make our own floats. How small town is that?

As we lounged with root beer floats on grass in the shade of trees lining the Sakatah Singing Hills State Trail, I considered how fortunate I was to enjoy small town Minnesota on a stunning summer afternoon with two guys I love.

Sawing wood the old-fashioned way next to the Farmer’s Friends 4-H Club tent.

Love this grassroots sign posted in front of the food tent.

Old-fashioned games like a pop ring toss were available to play.

On the Trail of History, “the Horner” explained how items are crafted from horns/bones.

Another historian shared how plants can be used as natural remedies.

A fitting July Fourth weekend sign posted outside a Trail of History tent. 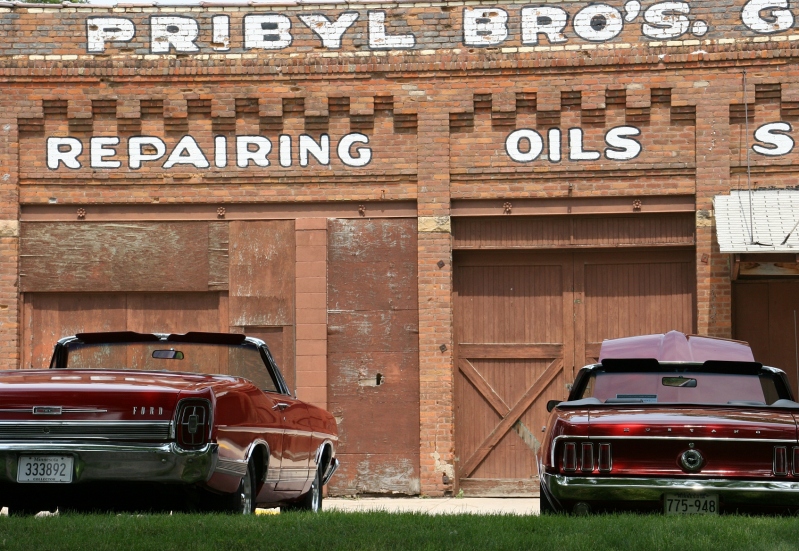 An aged garage along Elysian’s Main Street serves as the backdrop for cars in the Car Show.

WHAT ABOUT YOU? Is there a community event you attend or volunteer with each year? What makes for a successful community celebration? 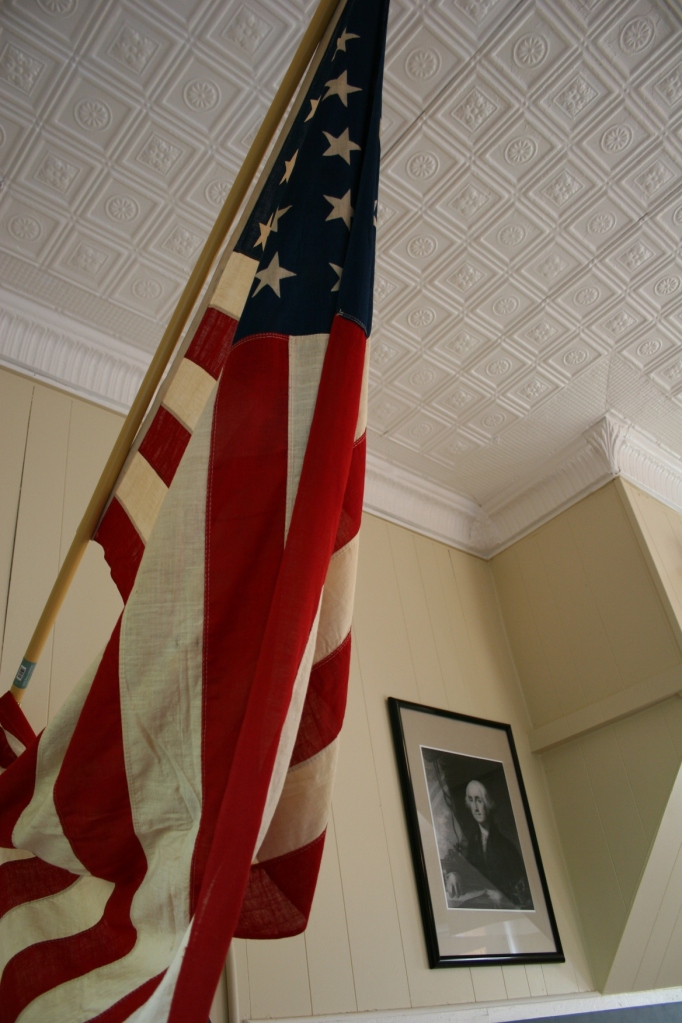 A flag and portrait of George Washington at the former District 20 Millersburg School, now a museum.

“I PLEDGE ALLEGIANCE to the flag of the United States of America and to the Republic, for which it stands, one nation under God, indivisible, with liberty and justice for all.”

As a child, my school days began with that pledge. My classmates and I arose from our desks at Vesta Elementary School, turned toward the American flag in the corner, placed our hands across our hearts, fixed our eyes upon the stars and stripes, and recited the pledge in unison.

I doubt we ever thought too much about the rote words we spoke. They were simply part of our routine, something we did, although I do recall feeling a sense of pride in speaking those words daily.

So much has changed in the decades since then. The Pledge of Allegiance, in most cases, has been banned from public schools in the name of political correctness. We are no longer one nation under God. While the U.S. remains one country, we as individuals are certainly divided in our views of anything and everything. That’s as it should be in a democracy. Liberty and justice have managed to prevail.

As we celebrate our nation’s Independence Day, it would be wise for all Americans to reflect on the Pledge and the words of other documents and songs that focus on the flag and freedom.

We hold these truths to be self-evident, that all men are created equal, that they are endowed by their Creator with certain unalienable Rights, that among these are Life, Liberty and the pursuit of Happiness.—The Declaration of Independence, signed on July 4, 1776 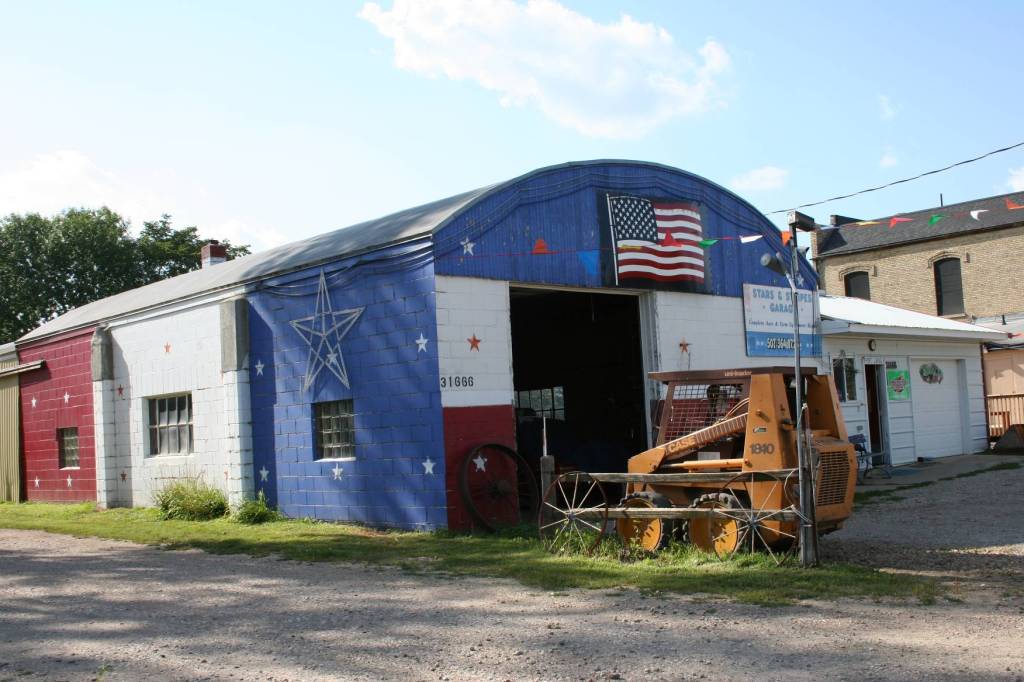 Oh, say does that star-spangled banner yet wave
O’er the land of the free and the home of the brave?—The Star Spangled Banner

An American flag painted on a shed in Dundas in southeastern Minnesota.

Congress shall make no law respecting an establishment of religion, or prohibiting the free exercise thereof; or abridging the freedom of speech, or of the press; or the right of the people peaceably to assemble, and to petition the Government for a redress of grievances.—The Bill of Rights, Amendment I 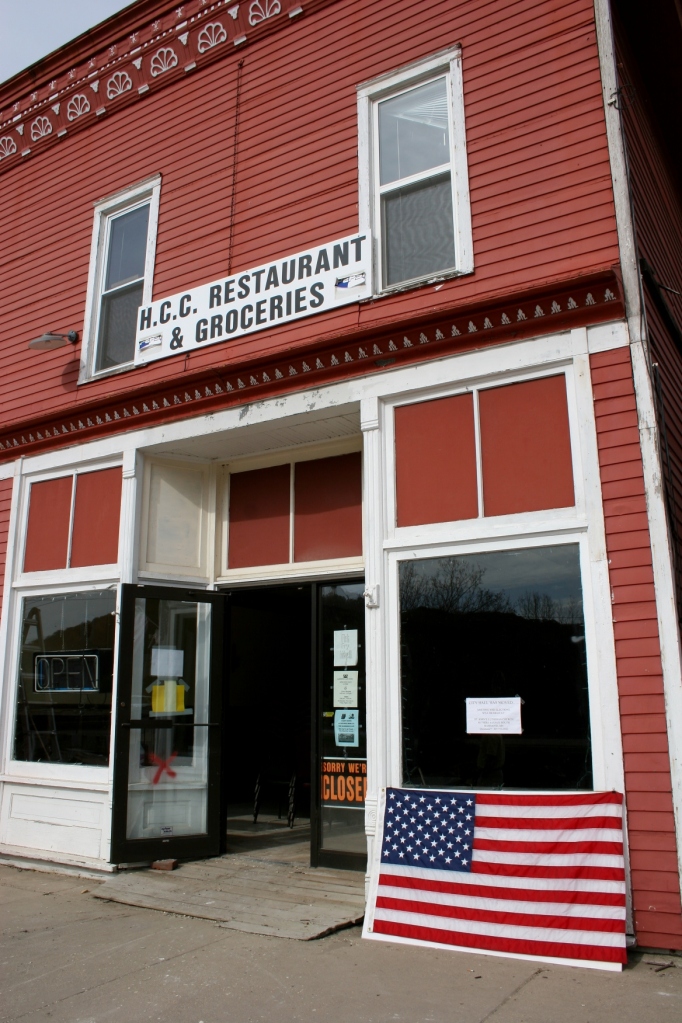 Weeks after a devastating Sept. 2010 flash flood in Hammond, in southeastern Minnesota, an American flag marked a ravaged business.

God bless America,
Land that I love,
Stand beside her and guide her
Thru the night with a light from above;