What I’m drawn to photograph in rural Minnesota January 7, 2020

One of my favorite Minnesota barns is this especially well-maintained one along a back county road west of New Ulm.

I FIND MYSELF, all too often in my on-the-road rural photography, focusing primarily on barns. My eyes gravitate toward these agricultural icons that I fear will vanish within the next 50 years, fallen to abandonment and/or replaced by nondescript cookie cutter metal polesheds. That saddens me. But it is the reality of the times, of the decline of the family farm.

Massive polesheds have replaced traditional barns on some farms, including this one along Interstate 90 in southeastern Minnesota.

I will continue to photograph these beloved landmarks, symbols of a bygone era of farming. Barns hold personal value to me as a farmer’s daughter. I grew up working in the barn—feeding cows, bedding straw, shoveling manure, lugging pails of still warm milk from cow to bulk tank and much more. 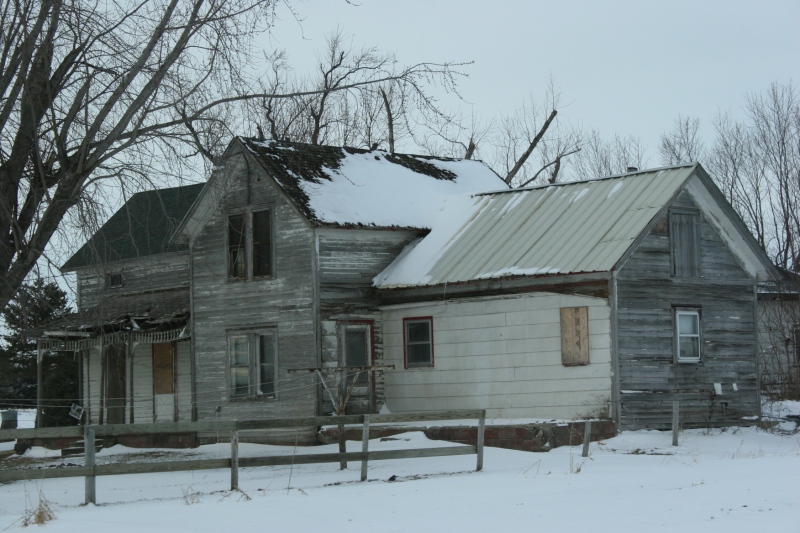 An abandoned farmhouse near Morristown, Minnesota. 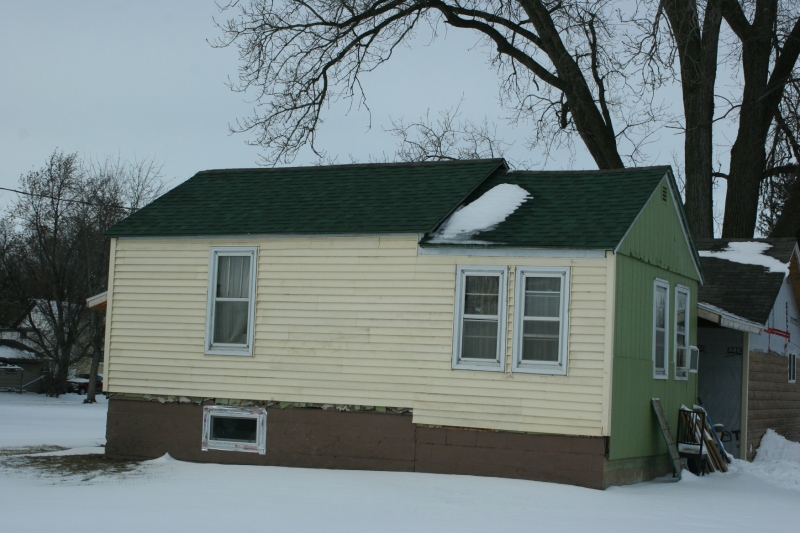 Just blocks away in Morristown, newer homes cluster in a housing development. A tornado hit this area in 2018, destroying and heavily damaging houses.

While documenting these centers of farm life, I’ve mostly neglected to photograph the homes of rural Minnesota. They vary from abandoned houses with broken windows to modern-day structures.

In southwestern Minnesota, an aged farmhouse so familiar to me.

It is the decades-old farmhouses that appeal to me most, no matter their conditions. My childhood home until my early teens was a cramped three-bedroom 1 ½-story house without a bathroom. A hulking oil burning stove in the living room heated the structure. A trap door in the kitchen opened to stairs leading to a dark dirt-floored cellar where salamanders lurked. Mom stashed the bounty of her garden in fruit jars lining plank shelves. 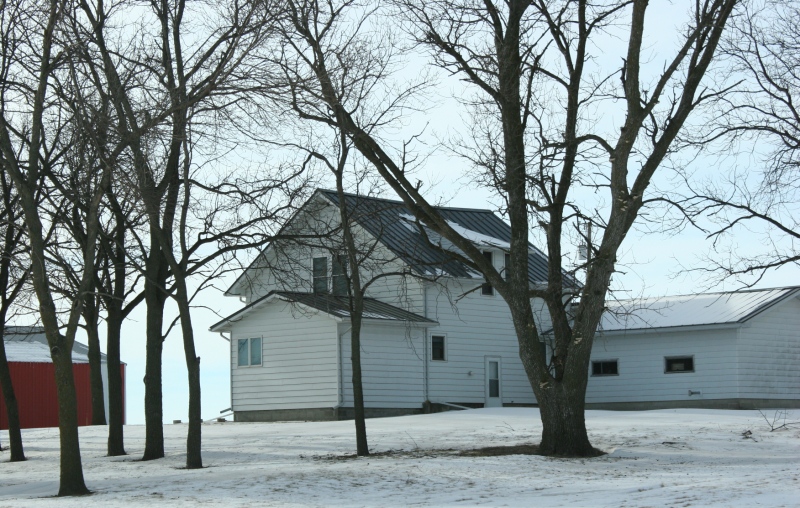 I am thankful to have grown up in a minimalist house, in a poor farm family. We may have been poor materialistically. But our family was rich in love. I never realized until I became an adult that I was raised in near poverty. Because of that background, I’ve never needed the most, the best, the newest.

In Kenyon, Minnesota, a brilliant turquoise makes this house stand out.

On recent road trips, I intentionally aimed my camera lens at houses. Both in small towns and in the countryside. These are not just houses. They are homes. Or memories of homes. Worthy of preserving with my camera as part of rural Minnesota history.

A home in the small town of Morristown, Minnesota.

SET ME IN FRONT of an architecturally-stunning historic building and I’m in history heaven. 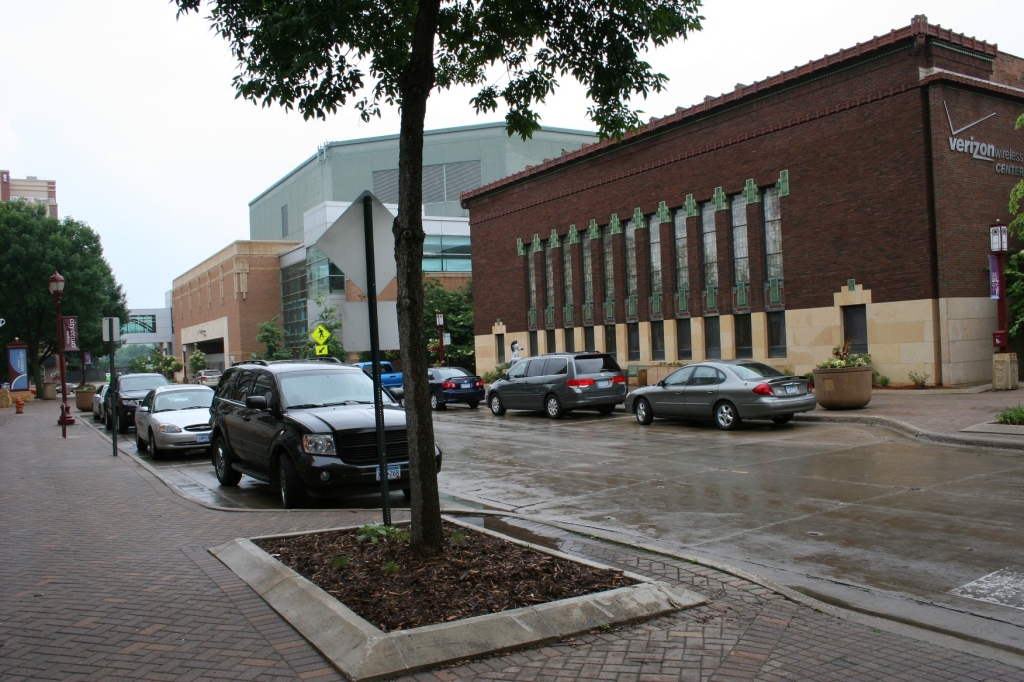 I didn’t step inside the former bank, didn’t even try a door. I was content last Saturday afternoon to view the exterior with its Prairie School style architecture.

“It’s like that bank in Owatonna,” my husband said as we gawked at the building built of brick, Mankato limestone and terra cotta along Civic Center Plaza in downtown Mankato.

He was, of course, referring to Chicago architect Louis Sullivan’s “jewel box,” National Farmer’s Bank in Owatonna, a brick building with terra cotta accents, splendid for its stained glass windows, arches and other architectural details. 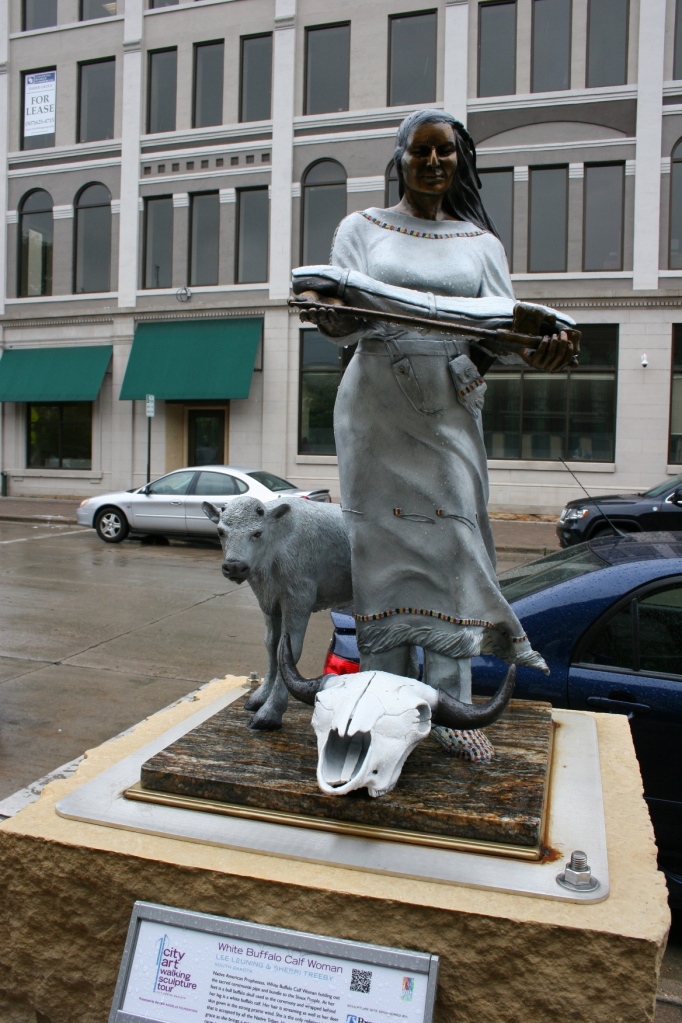 If you peer at the woman’s face, examine her beaded moccasins and the trim on her buckskin dress and pouch, you’ll notice how the colors mimic those of the historic bank building. Whether this Native American sculpture’s placement was planned or accidental, I don’t know, but it fits seamlessly with the historical vibe of the locale, enhancing the whole art viewing experience. 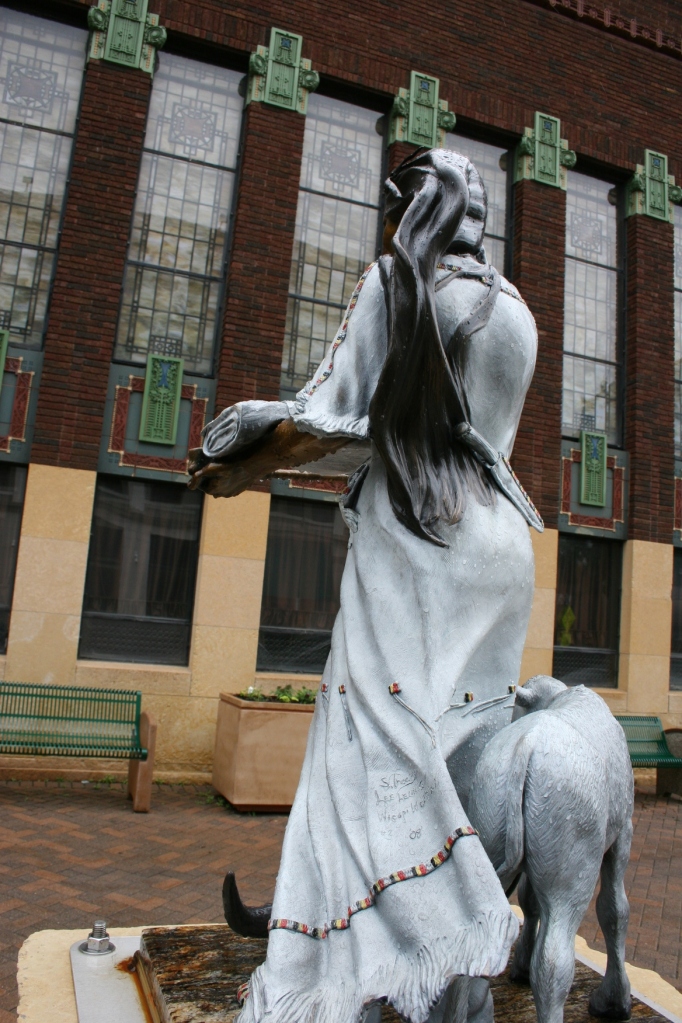 The city of Mankato, apparently named after a varied translation of the Dakota word Mahkato, meaning “blue earth,” owns a place in Minnesota and national history for the mass hanging of 38 Dakota here on December 26, 1862. Three hundred warriors were accused of killing civilians and soldiers and of other crimes during the U.S.-Dakota Conflict. After a public outcry, President Abraham Lincoln commuted the sentences of all but 38. Certainly, Mankato is not proud of this moment in history. But efforts have been made to honor the Dakota at monuments in the city.

And now sculptures like White Buffalo Calf Woman also help heal and educate the public about the Native American culture. According to information on the sculpture placard, this prophetess is the only religious icon accepted by all Native American tribes. She “brings a message of healing, hope and peace among the races to all the people.”

More than just art, I also got a history lesson along a Mankato city street on a Saturday afternoon in June.

PLEASE VIEW MY JUNE 20 post for more photos and information about the Walking Sculpture Tour. Additional images will be forthcoming.

A marker honors soldiers and citizens at the Birch Coulee Monument near Morton. White men and Native Americans fought in the battle at Birch Coulee on September 2 and 3 during the U.S.-Dakota Conflict of 1862.

IF EVER A WAR suffered an identity crisis, it would be the U.S.-Dakota Conflict of 1862. I’m not stating that lightly or in any manner that would indicate disrespect to anyone.

But, in all honesty, I sometimes don’t know how to label the battle between the Dakota people and the white people. I’ve struggled for years with that issue, most recently while writing an essay “Strong Words on Strong Stone at Birch Coulee,” published in Hidden History of the Minnesota River Valley by Elizabeth Johanneck.

Back in the 1970s, when I wrote a high school term paper on this conflict, I tagged my research as “The Sioux Uprising of 1862,” the accepted designation then. Prior to that, the word “massacre,” which seems entirely too biased and accusatory, denoted this event in Minnesota history. The conflict has also been termed as an “outbreak,” to me a tag more fitting of a disease.

The name evolved next to “The Dakota War of 1862” (still used by many) and then to the prevailing current-day usage, “U.S.-Dakota Conflict of 1862.”

Apparently, though, that label isn’t set in stone. Recently, while touring the Rice County Historical Society Museum in Faribault, Director Susan Garwood and I discussed the title while standing next to a recently-restored Civil War battle flag carried by Co. C Sixth Minnesota Volunteer Infantry.

Today the word “rebellion” has even been tossed about in defining the conflict, Garwood says.

Right or wrong, I find it interesting that, 148 years after this “war” or “conflict” (or whatever word you choose to define it), the discussion continues. To me, the identity seems to switch with new insights, changing attitudes and/or political correctness.

Garwood also shared that more and more, historians are leaning toward viewing this conflict between the Dakota and the white people as part of the Civil War. After all, Minnesota soldiers, like the Sixth Regiment, fought against the Confederacy and defended the settlers against the Dakota. I suppose in many ways this makes sense since the wars between the North and the South and between the Dakota and the white men occurred simultaneously and were intertwined in defining the history of Minnesota and of this country.

Two Minnesota sites, Fort Ridgely and the location of the Battle of Wood Lake, are among nationally-designated Civil War battlefields. Both have been ranked by the Civil War Sites Advisory Commission of the National Park Service as “needing additional protection.” A Wood Lake Battlefield Preservation Association is working to preserve the battleground that marked the end of the U.S.-Dakota Conflict.

I expect that differences in opinion will always exist regarding the “correct” terminology and historical connections for the U.S.-Dakota Conflict of 1862 just as differences exist among people.

I grew up within 15 miles of the Battle of Wood Lake on land that lies between the Upper Sioux Community and the Lower Sioux Indian Community, so I am well aware of the differing perspectives and, yes, even prejudices and discontentment, that lingered when I left the area 36 years ago and which continue today.

Now as the 150th anniversary of the 1862 U.S.-Dakota Conflict approaches in 2012, I wonder, even worry, that deeply-rooted bad feelings, misunderstandings, bitterness and misconceptions will roil to the surface.

I hope that respect, rather than disrespect, define this remembrance.

Already, some efforts are underway to assure that the 150th commemoration includes reconciliation. According to an article in the New Ulm Journal, German polka dancers and Lower Sioux Community chanters, drummers and dancers performed earlier this week at a joint concert in New Ulm, site of several major clashes during the U.S.-Dakota Conflict.

Although nothing has been finalized, committee member Kim Janke tells me her group is planning battle site tours; marker dedications; symposiums; a banquet; dedication of a Brown County Museum exhibit on the War of 1862, “representing the pioneers, Native Americans and what happened during the war;” and more.

All of this gives me hope that someday, perhaps soon, all of us, no matter our differences regarding the U.S.-Dakota Conflict of 1862, can stand together, reconciled, in an unbroken circle of peace.